Nabilah Said’s last staged play, Drip, had a wisecracking and irreverent script which, at its heart, was a story about family. The play looked at the struggle of finding a sense of belonging within one’s family when the wide rifts in beliefs and behaviours seem impossible to bridge. Conceptualised by Nabilah, Teater Ekamatra’s Angkat shares a similar emotional core with Drip; the script was devised by director Irfan Kasban together with the cast.

A young girl, Salmah, is pressed to reconcile her dreams with her adoptive mother’s unbending disapproval. Angkat in Bahasa Melayu means “carry/raise”. Anak angkat means adopted child, referring to the protagonist, but interpreted in another way, it can also refer to the child’s obligation to “carry out” the parent’s wishes.

Adding another layer of metaphor to the play’s title is its rather abstract set, designed also by Irfan: a series of walls made up of unassuming stacks of cardboard boxes. Boxes carry memories, family histories, sometimes secrets, packed together and hidden away. The boxes we store inside ourselves can carry long-held biases and resentments. Sometimes children carry on the “boxes” that their parents carried. These ideas unfold over the course of the play, but unfortunately their effect is subsumed by an unsatisfying conclusion.

Angkat opens with a scene contrasting what is considered “traditional” versus “modern”: Khadijah (Norsiah Ramly) dons the requisite garments to recite prayers, while her adopted daughter Salmah (Sahirrah Safit) watches her listlessly, brushing her own hair and tending to her appearance. She’s preparing to audition for a flashy televised singing competition National Idol. Khadijah disapproves, fearing the moral ramifications of showbiz life, and Salmah tries to reassure her she will not compromise on the values she has been raised with. 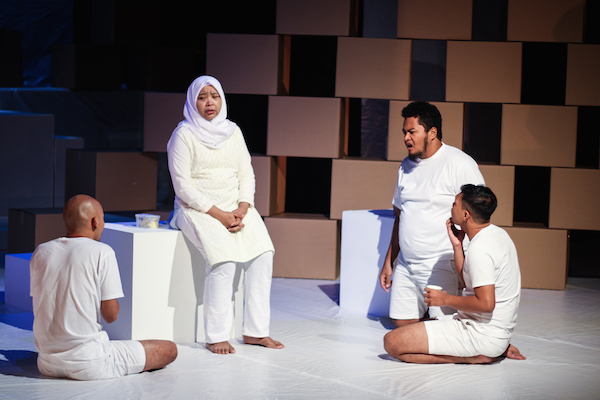 As the play progresses, Idol judges (Erwin Shah Ismail, Faizal Abdullah and Farez Najid) begin to interrogate aspects of Salmah’s identity. Much of the play’s humour comes from them suggesting various publicity “angles” (boxes?) that seem suspiciously centred on ethnicity (“you have the Modern Malay Girl look”, “the exotic mixed-race girl”, “wear this kebaya so you can get the Peranakan vote”) in order to garner votes.

Compelled to re-examine her identity, Salmah eventually discovers her birth certificate that Khadijah hid from her. This knocks over more fragile secrets: Salmah was born out of wedlock; Khadijah is her grandmother; the real reason she disapproves is that her daughter (Salmah’s mother) pursued the very same ambition (boxes!), and that led her to “sleeping around with white men”. As Khadijah’s wall of carefully ordered secrets has fallen, she reveals her fear that if Salmah continues with a music career, she will “carry on” the same fate of her mother, i.e. that of moral degradation. At this point, the play unexpectedly takes on the tone of an outdated TV soap, rather than a nuanced and multifaceted theatre play.

Without any reservations, Salmah promptly gives up Idol and in the final scene, joins her mother in prayer. The abruptness with which this too-neat conclusion is decided upon – especially considering much of the first half of the play revolved around the Idol competition process – is somewhat blindsiding. We are not taken into Salmah’s inner conflict, between navigating her identity within the Idol process and possible pop-stardom, and abiding by her grandmother/foster mother and religious tradition. Angkat packed a lot of thought and themes into an engaging story, but one that is unfortunately waylaid by a lack of clear denouement, and its promise didn’t quite carry through.

“Angkat: Carrying the Nuances of Life onto Stage” by Dawn Teo (Popspoken)
“Story about identity is slick, but stuck in stereotypes” by Akshita Nanda (The Straits Times)
“Review: Angkat by Teater Ekamatra” (bakchormeeboy)
“Angkat” by Myle Yan Tay (Centre 42)

Angkat by Teater Ekamatra was staged from 20 – 24 December 2017 at Malay Heritage Centre Auditorium.