On 1 November, The Arts House plays host to an unlikely wedding celebration titled A Bigger Party Than Expected, which features “silent disco” dances to an Eurasian folk song, multidisciplinary art installations, and an assortment of performances. These unusual nuptial festivities are how The Arts House is celebrating the fictional union of Bertha and Heng from The Shrimp People, the debut novel by Singaporean writer Rex Shelley (1930 – 2009). Published in 1991 when he was 61 years old, The Shrimp People was an instant bestseller which went on to win the National Book Development Council’s top prize that year. The well-loved debut was followed by an oeuvre of four critically lauded and award-winning works, and the prestigious S.E.A Write Award in 2005. A Bigger Party Than Expected is a one-night-only tribute showcase of specially commissioned and curated artworks by local artists and arts groups, and is part of the Singapore Writers Festival’s (SWF) Literary Pioneer programme, which this year honours Shelley’s contributions to Singapore literature.

Professor Koh Tai Ann, who originally pitched the idea for the Literary Pioneer programme to the SWF team 11 years ago, points out that writers who have been given the honour of Literary Pioneer have come from different generations. Shelley, who belonged to the same generation as Merdeka-era literary pioneers Goh Poh Seng and Edwin Thumboo, was published decades later, and is a comparatively recent figure in this canon. “Shelley is truly a literary pioneer,” Professor Koh remarks, “because he is the first Eurasian author to publish an oeuvre of novels representing, in Singapore fiction, credible Eurasian characters and the community’s history, concurrently with the nation’s.” Keen to learn more about Shelley and his legacy in Singapore literature? You might be interested to attend Professor Koh’s lecture on Shelley, happening on 9 November at SWF.

Complementing Prof Koh’s lecture on Shelley’s life and work, the artworks curated for A Bigger Party Than Expected dialogue with themes in the novelist’s work, as well as to Eurasian history and culture in Singapore. One of the artists featured is director and performer Irfan Kasban, who will be presenting two works in one night: Watch My Damn Mouth with movement artist Ruby Jayaseelan, and Almari with performer Andre d’Rozario.

Irfan’s works use Shelley’s legacy as a departure point to discuss contemporary concerns such as cultural identity and the impact of colonialism on the Eurasian psyche. For Watch My Damn Mouth, he says he and Ruby take on “the roles of bridesmaid and groomsman tasked to come up with a dance number for the night’s entertainment.” He describes it as a “vocal-movement piece” in which the two performers respond to each other’s vocal gestures, exploring the complexities of the body and voice as markers of cultural selfhood. “We thought about why we were invited to this wedding, and how our presence would be perceived, mostly through our lived experiences … We hope to untangle the tensions within ourselves through this work. ”

Meanwhile, Almari is a dramatic monologue performed by Eurasian actor Andre d’Rozario on the stairways of The Arts House. It tackles one of this year’s hot topics in the arts: decolonisation. “I believe that one of the biggest problems with colonialism is nomination,” Irfan shares. “The obsession to classify people into groups based on race. I hope to counter this by means of a sincere, personal monologue of a man trying to be comfortable in his own skin, with the help of his mother tongue, Kristang.”

Theatremaker Edith Podesta’s participatory work Jinkli Nona Redux responds to the treasured Eurasian wedding custom of singing and dancing to the Portuguese-Malaccan folk song Jinkli Nona. Wearing “silent disco” headphones, audiences get to learn in an intimate manner both the choreography as well as the history of the dance and its significance to its community, gathered from interviews with members of the Eurasian community. It’s a “guided, embodied preservation of Eurasian intangible cultural heritage, of social choreography. There is so much history and meaning embodied in the dance steps,” shares Edith. The dance for Jinkli Nona can be traced to Portuguese folk dances and has influenced the Malay Joget. With the assistance of the Eurasian Association, Edith connected with choreographers and dancers, helping her to “locate the individual narratives within the anthropological.”

The one-night party doesn’t stop there: theatre collective Main Tulis Group is presenting ETA: 9 MIN, a series of nine-minute playlets; poet Cyril Wong presents RISK; experimental musician Bani Haykal debuts his durational installation Encrypting Kinships; and, of course, the festivities include an actual wedding party by the Eurasian Association, complete with a host, music by Muzik Line and Eurasian treats! Head to The Arts House from 8pm on 1 November and be a part of the celebration. 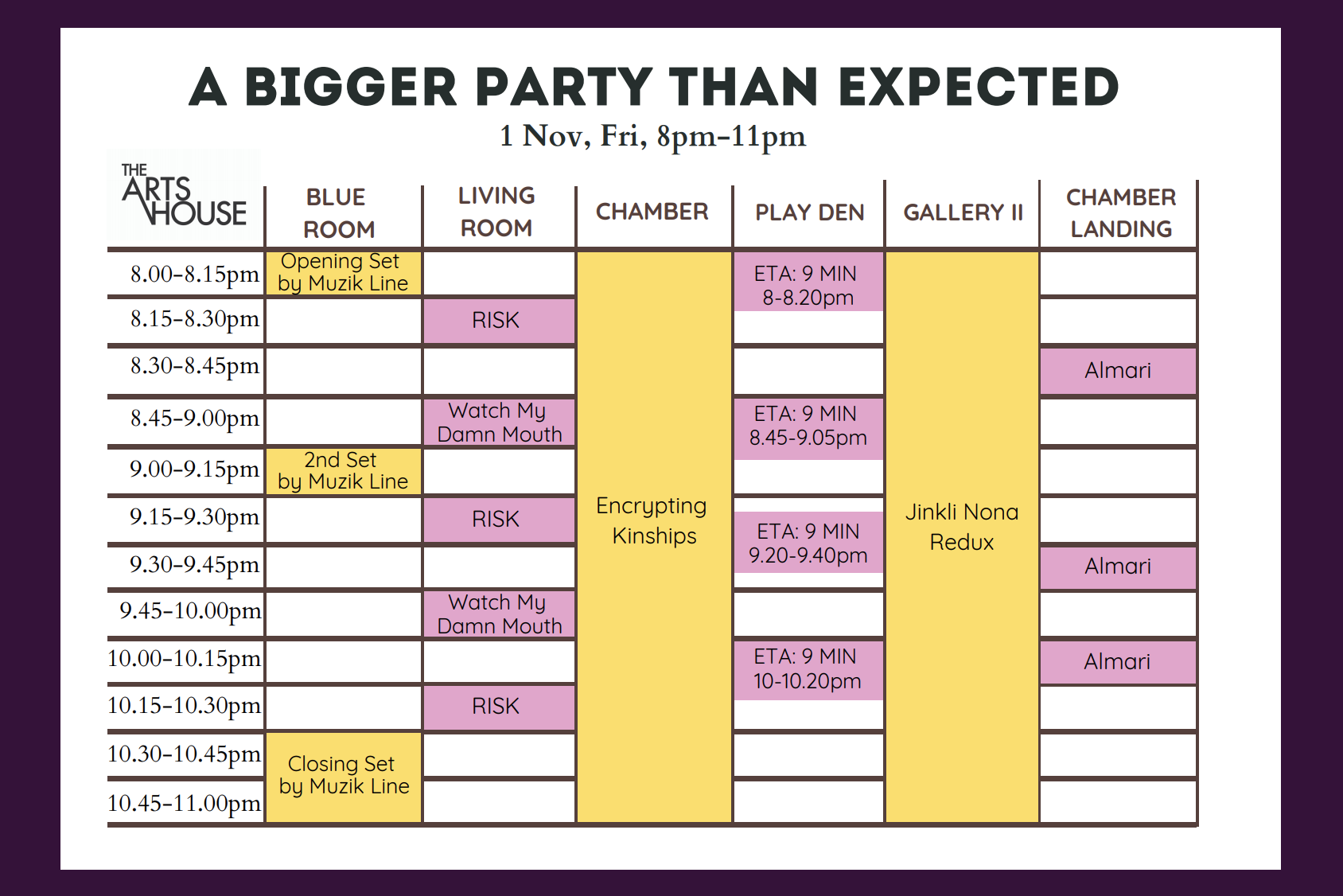 A Bigger Party Than Expected takes place at The Arts House on 1 November from 8pm till late. Tickets are at $30 per itinerary, which includes a mix of performances throughout the house. Read more here.

This post is sponsored by The Arts House Ltd.

Akanksha Raja is an arts writer who was formerly Assistant Editor at ArtsEquator.