The Orange Production is The Necessary Stage’s platform for experimental collaborations, producing new, pocket-sized works. This inaugural showcase is a double-bill featuring Drip, by journalist and emerging playwright Nabilah Said, and Whale Fall by Faith Ng. While the two works are vastly different in structure and themes, they both present incisive and sensitive voices that strike a balance deep-seated tension and playful lightheartedness.

Drip is Sharma’s first time directing a play other than his own works. It zooms in on an interracial couple, Azam (Faizal Abdullah), who is recovering from a heady night of drinking and surrounded by a copious number of bottles of liquor, and Xiaoyan (Deonn Yang), who is a convert to Islam, fighting her craving for pork. Along the way they are visited by his sister Ana (Shafiqhah Efandi), the black sheep of the family who has just come out of a live-in relationship with her Indian boyfriend. 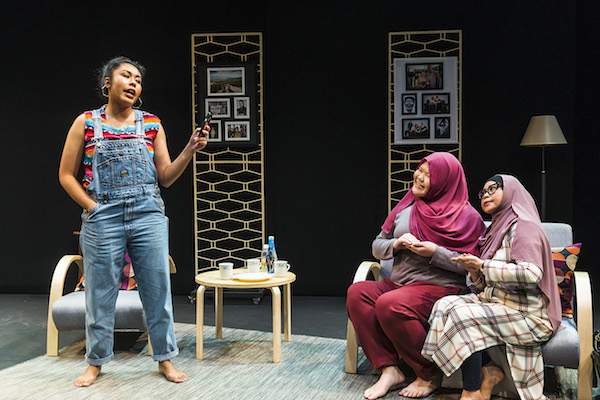 The clash of values that ensues when the siblings’ devout and righteous mother (Nurijah Sahat) unexpectedly arrives at the house is treated with irreverence and iconoclasm; the dialogue crackles with its bold and crisp satire of overly pedantic, traditional Muslim mindsets. But the play’s cheekiness is compassionate, humanising the multi-faceted nature of the characters, without which it could easily be seen as flippant and subversive for the sake of being contrarian. Its comedy succeeds because of the richness and resonance of the characters. For example, Mother’s sentimental recollections of her youth endear her to the audience despite the play’s tone of mockery of her insistent piousness. Initially snubbing Ana for her history of not coming home for Hari Raya, Mother eventually warms up to her and asks after her recent break-up, illuminating the possibility for love and tenderness in the middle of familial tensions. Nurijah Sahat contains gentleness in this diminutive, assertive character, that makes her likeable. 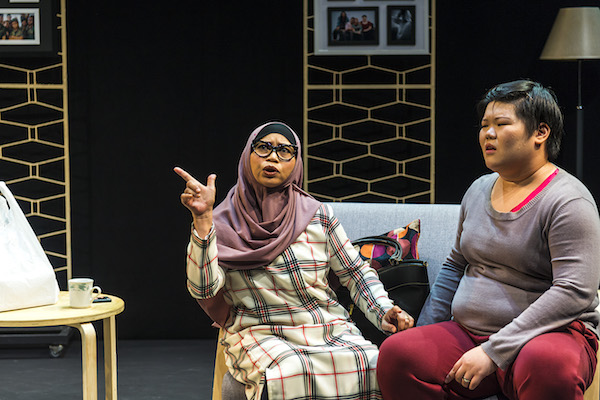 Sharma amplifies the playful tone of the script with interludes where characters break into melodramatic monologues illuminated by garish spotlight, parodying tragic local TV soaps. Even when the direction doesn’t seek to parody prime time television, the play pans out in the style of a sitcom, as silly slapstick moments (such as Ana and Xiaoyan’s comical frenzy to find an appropriate hiding place for the alcohol, or the deliberate clashing and bumping of dishes to symbolise tensions rising and dripping over the brim) are balanced out by witty monologues that serve to give insight into the characters’ lives. 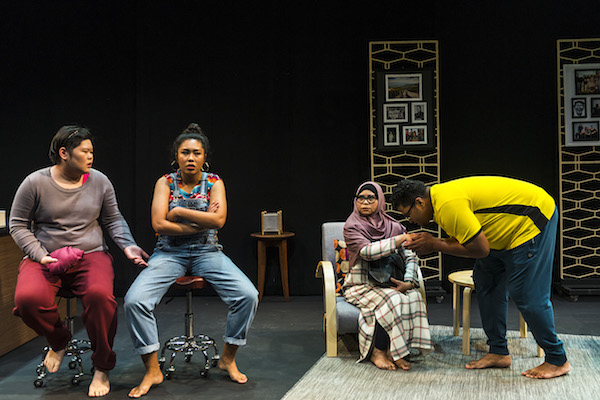 The more sober but just as expressive Whale Fall by Faith Ng plays out the intimacy of female friendship – a recurrent motif underscoring Faith’s repertoire – as two women (ambiguously named L and J) discuss their fears of loss and memories of trauma. True to Faith’s style of writing, the work is laced with poignant symbolism: a whale fall refers to the carcass of a whale, within which a new ecosystem grows – mirroring how death and loss can breed hope and redemption. 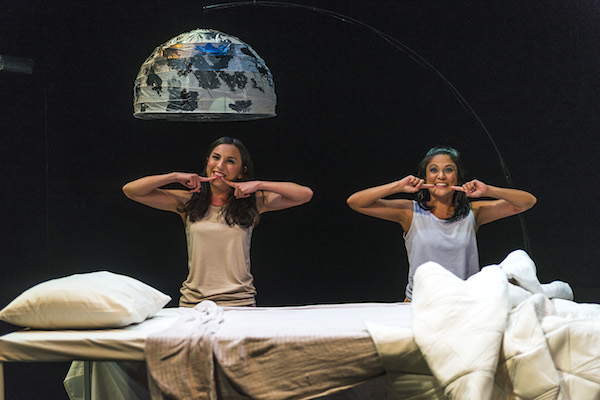 For this piece, directed by Alvin Tan, the stage is backlit by the romantic glow of a large moon. Another soft light glimmers from a lantern, whose skeleton/frame resembles a kind of whale fall itself, hovering above a bed. Set designer Azy Alias visioned for Whale Fall a sparse and dreamlike space drenched in gentle white and off-white hues. Coupled with sound (by Jing Ng) that transports the audience to a kind of underwater otherworld, it feels like we’re visiting the unconscious microcosm of a relationship between two people that is as alluring in its charm and playfulness as it is fraught with tricky power imbalances, and a struggle for control. 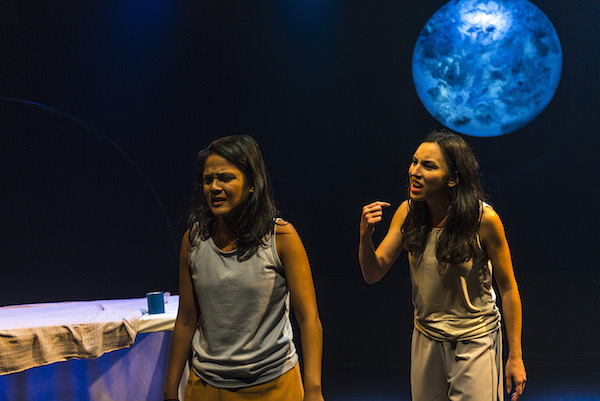 The work is shaped by such dualities. The girls console and bicker, commiserate and bully. All the while, the comfort of their childlike imaginations interweaves with the pain of adult realities: what begins as a make-believe dive into a deep ocean leads one of them to muse about the loss of her grandmother’s dentures, and consequently the history of domestic abuse that runs in her maternal lineage. The stuffed toy whale that literally falls on stage more than once symbolises the fall of innocence and naivete; at another point, the girls are tossing sweets back and forth between each other until it turns into an ominously abusive situation when one of them forcefully pelts the other with hard candy, mocking the other’s powerlessness.

Pain unravels alongside the peacefulness and love in the girls’ relationship, and their dynamic feels familiar to the experience of girlhood friendships maturing into adult relationships. Naturally being close friends themselves, actors Elizabeth Lazan and Jeanne Reveendran take on these subtleties fluidly and in the affectionate, playful scenes the viewer forgets this is a devised, rehearsed work as it looks true to life.

The Orange Production offered a significant platform for two young playwrights to work together with seasoned senior theatre-makers to bring to the stage small, slightly offbeat and insightful explorations of friendships and family relationships. It’s a promising collaborative dynamic that pays off beautifully, and we look forward to the new voices and stories to come in future iterations of The Orange Production.