The George Town Literary Festival returns for its ninth year next weekend (21 – 24 November) with the theme of forewords/afterwords, a decidedly future-oriented focus pertaining to notions of transitions and new beginnings. Some of the festival highlights include a conversation with 2019 Man Booker International Prize winner Jokha Alharthi, a lecture by American essayist Eliot Weinberger, panels featuring veteran Indonesian poet Goenawan Mohamad, as well as sessions that shine the spotlight on younger, emerging names such as Malaysian YA novelist Hanna Alkaf and Singapore’s Internet-famous siblings, social media star Preetipls and musician Subhas.

ArtsEquator got in touch with two of the 80 renowned figures who will head to Penang’s capital for the festival next week – Syrian poet Mwaffaq Al-Hajjar and Indonesian writer and translator Tiffany Tsao – to chat about their work, what Southeast Asia means to them, and what they’re most looking forward to at George Town.

Interviews have been edited for length. 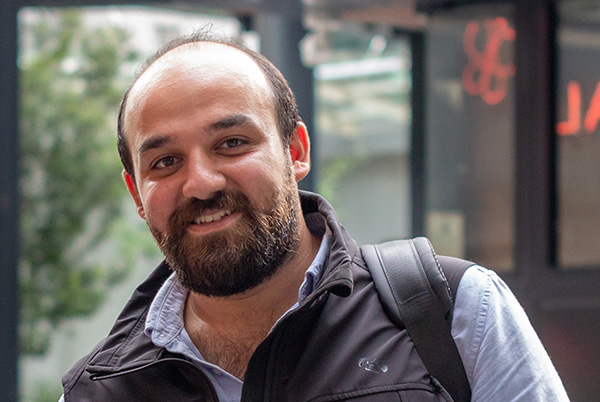 AE: You’re a petrochemical engineer, a creative writer and have also worked in theatre. People often see engineering and art as two very different things. Do you see them as separate identities, or are there similarities?

Mwaffaq Al-Hajjar (MA): As an engineer and a former lecturer of chemistry, I always believed that science in general is a form of art. There is a deep connection between them. An artist is someone who has high sensibility to the aesthetics of the universe, while a scientist is someone who has the ability of explaining it. I don’t think that being an engineer artist has given me two different identities. I am in the middle of the road, and I am trying all the time to find and/or to establish a bridge between them.

AE: You moved to Malaysia from Syria in 2016. Do you feel that the practice of writing has helped you find a community or sense of belonging in Malaysia?

MA: Definitely. I remember in my first year being here, how disturbing it was to feel that I lost my voice. Being an Arabic-language poet has built a wall between me and people I interact with, and there’s no greater tragedy for a poet than losing the ability of performing poetry in front of an audience that can understand it. So I started translating some of my texts and started writing in English too. Poetry was the key to meet people and to find friends, for me to get my voice back, and it opened new dimensions for me in Malaysia.

AE: You were the first-prize winner of the 2017 Migrant and Refugee Poetry Competition. Do you see yourself as “migrant/refugee poet” – is this part of your identity important to you? Or do you prefer that you are seen as a “poet” first?

MA: This identity is undoubtedly important for people here to understand my situation, or maybe to categorise me. I absolutely prefer to be considered as Mwaffa, the human being who writes poetry. I understand that this identity is just a social status that I was forced to [take on] and to deal with. My only concern is that I don’t want to be read [on the basis of] my social status, I always want my work to be evaluated for it is quality. Nevertheless, migration has taught me a lot and let me explore the meaning of many notions that I took for granted, made me re-define the meaning of home, poetry and belonging.

AE: Have you been to the George Town Literary Festival before? How do you feel to be part of it this year?

MA: I remember in 2016 when I first came here, and heard of GTLF, I promised myself to be there one day. I was invited with a group of other migrant/refugee poets last year, and I performed a few poems there and met brilliant people. This year is different and special for me, I’m going there as a panelist and a published poet. I am quite excited about meeting great people there, like Jokha Alharthi, the first Arab woman to win the Man Booker prize. I’m honoured to be alongside with great Malaysian and international names and I wish I could attend every discussion and panel there.

I love Penang and George Town so much! I always thought that Penang is a huge open gallery of art, including food, roads, flowers, and people. I’m looking forward to the food: the local food there is a joyful experience, and there’s also the best Syrian flafel stall in Malaysia. This stall in Chulia street is a must-to-visit place for me whenever I go there.

Mwaffaq Al-Hajjar is a panellist in the discussion “The Revolution Will Not Be Televised (It Will Be Spoken)” on 22 November at 6:30 pm, at Black Kettle. His first collection of poetry titled “Poetic Entropy” has just been published by Gerakbudaya and will be launched this Saturday, Nov 16, 3pm at the Gerakbudaya bookstore in Petaling Jaya.

AE: You were born in the United States, grew up in Singapore and Indonesia, went to college in the States and now live in Australia. Your first full-length novel The Oddfits was set in Singapore; you mentioned in an interview with the Straits Times back then that “in many ways, it’s the country I’m most familiar with,” and in a more recent interview you described your cultural self-identity, when you were in college, shifting from part-Singaporean more towards Indonesian.

What is your relationship with Southeast Asia, given that both Singapore and Indonesia have both shaped your identity in some way?

Tiffany Tsao (TT): I still feel very strongly, and perhaps irrationally, that Southeast Asia is my home, even though I have lived abroad for almost twenty years now. The feeling is maintained by the fact that my family members still live in Singapore and Indonesia, and that I often return to visit. To be honest, I’m not sure if I will ever truly consider anywhere outside Singapore or Indonesia home, even though I know that I become more estranged from both countries the longer I live abroad. You know how ducklings imprint? I feel like that’s what has happened with me and Southeast Asia. Something about growing up there has made my affinity irrevocable, and I don’t think I am able to uproot.

AE: When I read your essay for Electric Lit about the politics of translation, it reminded me of a panel discussion about world literature that I attended at the Singapore Writers Festival 2017, where the American writer and translator Ken Liu said: “Translation (at least translation for an Anglo-American readership) is not just a bridging of divides. It’s an act of power. It’s an act of domestication, alienation, and reduction.”

In your translation work from Bahasa Indonesia to English, how do you conceive of your readership? And in your process, how do you manage that responsibility of being sensitive to the power imbalance between the cultures in translation?

TT: I like to give the imagined readership of my translations the benefit of the doubt. I like to think of them as open-minded and adaptable—willing to take unfamiliar landscapes, customs, histories, and cultural and societal norms on their own terms; willing to adjust themselves to the text rather than expecting the text to suit their particular expectations and tastes.

AE: In the article, you write about the Western perspective on Indonesian literature. I’m curious about what you feel about readership within Southeast Asia. From your perspective, how is Indonesian literature read and received in Southeast Asia (or Asia?) Do you find there’s lesser or greater interest? How different is the reception? (There’s been a lot of discussion – at least in Singapore – about how we need to read more from the region, and promote it over the desire to read and be read by the Western world.)

TT: I will confess that I don’t know very much about how Indonesian literature is read and received in Southeast Asia (or Asia) in comparison to its reception abroad. But I think the very fact of my ignorance demonstrates the problem. As you point out: there is an emphasis on how Southeast Asian books are received in the West (and in particular, the UK and US), but not so much on how they are received within the region itself, by neighboring countries—which is sad.

But for this to change, I believe the onus lies more with the readership and media within Southeast Asia itself, than with writers. I’d love to see more Southeast Asian book reviewers, publishers, prize juries, etc. taking less of their cues from the West, and genuinely valuing, promoting, and translating authors from the region without having to wait for the West to tell them who’s who. As long as critical acclaim from the West is the key to a writer achieving better financial circumstances, international recognition, acceptance in their own home country, etc., writers will desire to be read by the Western world. This is only logical and writers shouldn’t necessarily be faulted for it.

AE: Have you been to the George Town Literary Festival before? How do you feel to be part of this year’s line-up?

TT: I’ve never been to GTLF before, and I am extremely excited to have been invited! I’m particularly looking forward to meeting Malaysian authors and learning more about the local literary scene. The last time I visited George Town was about eight years ago, for five days, and I really had a wonderful time. I also really love asam laksa and it will be my unofficial goal to eat at least two bowls a day.

Tiffany Tsao is a panellist in the discussion “The Beauty and Chaos of Translation” on 21 November, 2pm at Black Kettle, as well as “It’s Not The End of The World As We Know It” on 24 November, 4pm at UAB Building.

This post is sponsored by George Town Literary Festival.

Akanksha Raja is an arts writer who was formerly Assistant Editor at ArtsEquator.