Speculative fiction (or spec-fic) is an umbrella term for a number of literary genres including science fiction, fantasy, alternate history, magical realism, and horror. It’s the term for all those movies and books that for most of the 20th century used to be typified as the domain of the “unpopular nerd”: Star Wars, Lord of the Rings, Frankenstein, anything Edgar Allen Poe. More recently, with the popularity of Neil Gaiman, the Harry Potter and Game of Thrones franchise, and countless sequels in the Marvel or DC franchises, Western speculative fiction is not really as “fringe” or as niche a genre as it used to be. What most of us in Southeast Asia might be less aware of is the rich history of spec-fic in our region that has existed for years, and continues to grow.

Jason Erik Lundberg pointed this out at the beginning of the SEA Speculative Fiction panel at the Singapore Writers Festival 2016: that considering mythology as a type of speculative fiction, the genre has existed in Southeast Asia for about 2500 years. He is the editor of LONTAR, Southeast Asia’s first periodical journal anthologising speculative fiction written by Southeast Asians, or by non-Southeast Asians about the region. The etymology of lontar stems from the Indonesian word for a palm-leaf manuscript on which mythical stories were recorded from as early as the 5th century BC.

The panel – consisting of JY Yang and Ng Yi-Sheng of Singapore, joined by Eka Kurniawan of Indonesia – went on to cover a number of subjects including the idiosyncrasies of Singapore that encourage speculative narratives (Ng: “Singapore is just so weird, it’s an ‘impossible nation'”; Yang: “We just happen to live in a futuristic dystopia that lends itself to the genre.”) It also included a brief but eclectic bibliography of regional spec-fic by Ng (selected titles listed at the end of this article.) 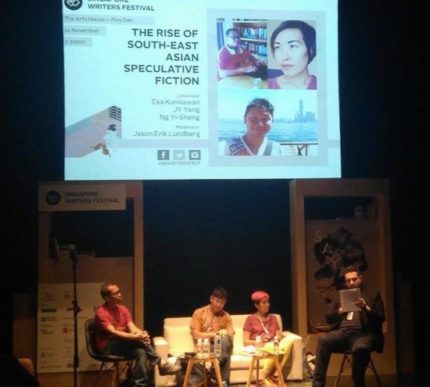 The most pressing point that emerged from the discussion centred on the writers’ postcolonial conflict: of wanting to contribute to the growth of speculative fiction in the region, but facing pressure to gain recognition in British and American markets.

This conversation revolved around a question from Lundberg as to whether the writers’ work is “validated” if it is recognised outside their own country; whether being published elsewhere has affected their careers. In response, Kurniawan, who with  Beauty is a Wound became the first Indonesian writer to be nominated for a Man Booker Prize,  shared that he observed a greater receptiveness to his work from Indonesians only after he was published in the USA.

It doesn’t help that Western markets tend to have a reductive understanding of Southeast Asia: for instance, in the first international print of Kurniawan’s novel, the cover design featured an East Asian woman. Ng noted an increasing inclination in the international market to focus on diversity in young people’s fiction, observing himself inadvertently “self-exoticising” in order for his work to appeal to a Western readership.

Kurniawan also emphasised a need for more Southeast Asian spec-fic to be translated across the different languages in the region, remarking that it has long been a practice in Europe for books to be translated to cater to all neighbouring markets. Ng agreed that this must be encouraged in the region, adding that Singapore literature is included in university curriculum in Filipino colleges, whereas Singaporean readers generally don’t read very much Filipino work.

The panel ended with a reminder to all spec-fic readers and writers that as appealing as it is to orient ourselves towards British or American markets, it is important to pay attention to the talent that comes from our own shores. Instead of measuring Southeast Asian fiction against an international barometer, we should work towards intra-SEAs translation and distribution in order to cultivate the development of the genre in regional literature.

The Sea is Ours: Tales of Steampunk in South East Asia by Jaymee Goh and Joyce Chng (2015)

This panel on Southeast Asian speculative fiction was held on 12 November 2:30pm at the Play Den, Arts House, as part of the Singapore Writers Festival 2016. Moderated by science fiction writer Jason Erik Lundberg, the panel featured Singaporeans JY Yang and Ng Yi Sheng together with Eka Kurniawan from Indonesia.
A live stream comment thread of the panel can be found on the Facebook page of Sing Lit Station.