Zanele Muholi, recipient of the 2016 International Center of Photography’s Infinity Award for Documentaries and Photojournalism, had her piercing gaze fixed on one of Kyoto’s most well-known backstreets recently.

She was looking at the cherry blossom trees that had shed all its pinkness and had turned green. She was listening to the gentle sound of clear waters flowing in the waterway downstream towards the Kamo River. She was staring at the passers-by, who sometimes looked back with intrigue.

The huge, black-and-white photograph of this South Africa-based photographer garbed in a ‘headdress’ which looked like one of those traditionally worn by African women but made of clothespin, and wearing a white lipstick that accentuates her full, lush lips, could easily pass off as an odd advertisement of a luxury brand. 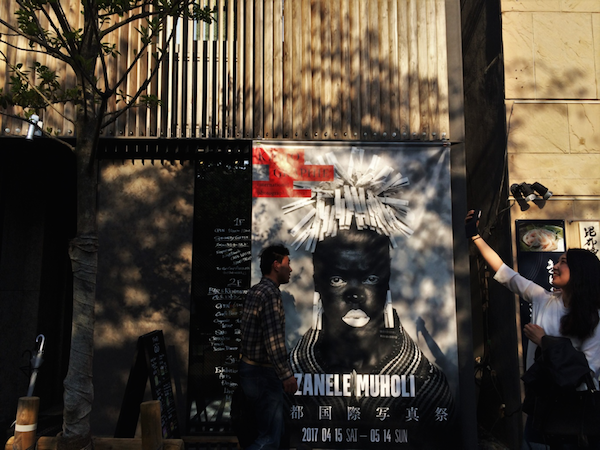 But Ms Muholi had something else in mind when she made the picture. It is a tribute to her mother who was a servant in a white family, the pegs on her head symbolising the countless hours of labour by nameless black women during the Apartheid. It is an act of defiance against what constitutes beauty in the eyes of the consumerist by pulling their gazes towards her – her blackness, her identity, her struggle against invisibility.

Her story and the stories of countless black women existing in the fringes of society during and post-Apartheid years unveiled inside Forum Kyoto, a private gallery that hosted the exhibition Somnyama Ngonyama (“Hail the Dark Lioness” in her native Zulu). It was a part of the KYOTOGRAPHIE International Photography Festival, an annual event showcasing the works of Japanese and international photographers and visual artists in Kyoto which ran between April 15 to May 14 this year.

Born in South Africa in 1972, Ms Muholi’s key investigation is in the devastation of discrimination in her home country; firstly against people of colour and now, sexuality. She has spent more than a decade documenting through photography and film, the lesbian, gay, bisexual, transgender and intersex (LGBTI) community in Africa, or known locally as ‘queer women’. In the course of it, she confronts her own identity as one of them, which makes all her works in one way or another, autobiographical. 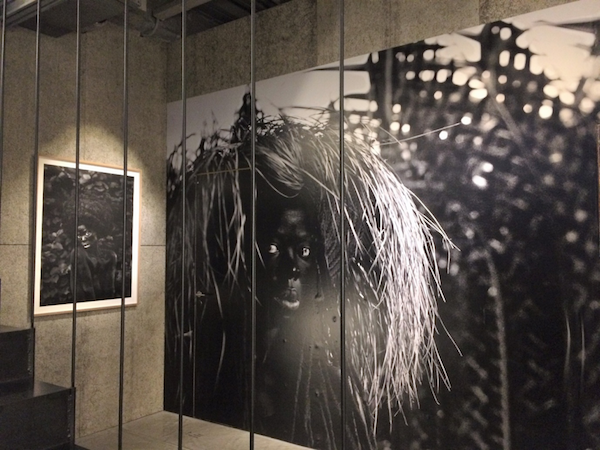 In African history, to be a woman, black and lesbian is to put one directly in the line of fire. In 2006, South Africa legalised same-sex marriages, but it did little to eradicate discrimination against queer women. Rather, the queer women in Africa received more backlashes and were easy targets of abuse and violence. Most cases had gone unreported.

Ms Muholi calls herself a visual activist rather than a photojournalist, and uses her works to push for inclusivity and visibility among the LGBTI groups in her country.

Her most notable body of work, Faces and Phases, an ongoing documentary project where she photographs portraits of queer women, has won critical acclaim and numerous grants and awards, including the Prince Claus Award and the Fine Prize at Carnegie International in 2013.

Faces and Phases has been shown extensively in many parts of the world, except her own country where the queer women are still living and at times hiding in.

In an interview with the Aperture in 2015, Ms Muholi said she believed the queer women of Africa should be made a part of its visual history that has so far, been dominated by male photographers and images of black women in weak dispositions. 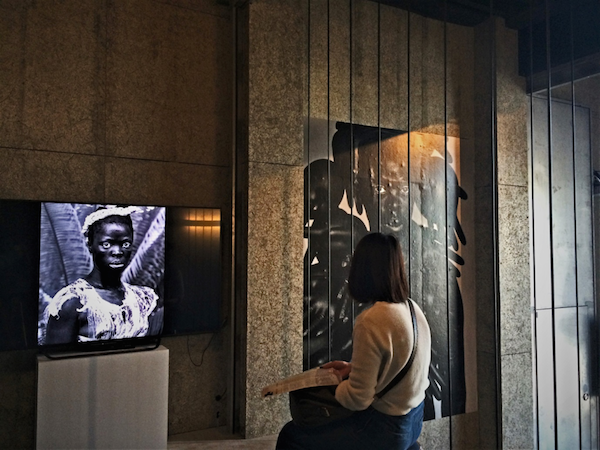 In Somnyama Ngonyama, she turns the camera towards herself and poses with daily objects such as a lampshade and newspapers. From what seems banal at first, Ms Muholi draws a point as simply as this: she just simply refuses to be looked over.

The steel bars in the gallery had unwittingly added another layer to Ms Muholi’s works. It gave the effect that Ms Muholi was caged behind bars. She looked at her viewers through the bars, and so, her determination to be seen became so much more apparent. 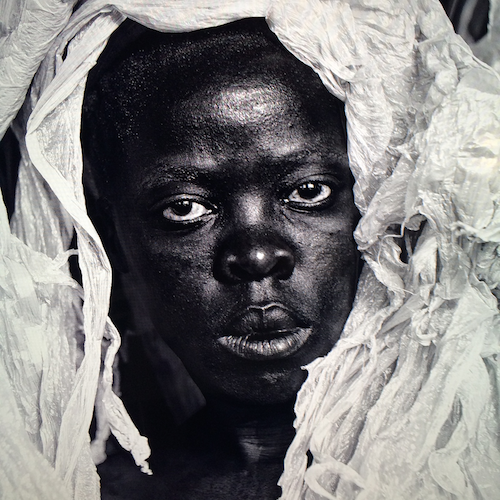 Ms Muholi’s self-portraits are arresting and breathtaking. She is beautiful to look at. In one self-portrait, she lies naked on a white bed sheet, her black body gleaming like a panther’s fur against it. Her gaze is sharp and powerful, which contrasts the reality of queer women’s standings in African society.

The ironic thing about photography is that the camera, though often thought of as a tool to prove a certain truth, has a way of distorting reality. You frame your subject and crop all other things around it, and you see something else.

This is how Ms Muholi’s photographs work. Rather than telling us about the defenselessness of queer women of Africa, she celebrates their existence and hers, amid a culture of hate crime against them. Through her camera, Ms Muholi puts the queer women of Africa on a pedestal and makes them queens.

Somnyama Ngonyama was on display from 15 April to 14 May 2017, at Forum Kyoto, held as part of the KYOTOGRAPHIE International Photography Festival 2017.

Yong Yen Nie has worked as a journalist, editor and photographer in Malaysia covering politics, business, economy and the arts in Southeast Asia. She is currently pursuing her post-graduate studies in Economics at the Ritsumeikan University in Japan. Occasionally, she blogs about photography here.