A dance festival will take place in Ho Chi Minh City and Hanoi next month, featuring performances and other activities by Vietnamese and international artists, the organizers said on Tuesday.

The Krossing Over Arts Festival (KOAF) 2019, the third edition of its kind, will treat audiences in the two Vietnamese cities to 11 contemporary dances, the French Institute in Vietnam, which co-organizes the event with Kerman Company, said at a press conference in Ho Chi Minh City.

The performances will be staged at 15 different venues in Ho Chi Minh City from April 5 to 11, and in Hanoi from April 13 to 21.

Other activities, including screenings of short films, artist talks and workshops on contemporary dance, will also take place during the festival, according to the organizers. [Read more…]

The ties that bind: India and Indonesia’s cultural and historical bonds
The Jakarta Post

Author J.K. Rowling recently tweeted about the character of “Nagini” in the film Fantastic Beasts: The Crimes of Grindelwald by writing, “The Naga are snake-like mythical creatures of Indonesian mythology, hence the name ‘Nagini’. They are sometimes depicted as winged, sometimes as half-human, half-snake[…].”

Rowling’s comment linking “Nagini” to Indonesian mythology drew a reaction about the true origin of the word Nagin or Nagini.

Indian author Amish Tripathi, who wrote The Secret of the Nagas, the second novel of the Shiva Trilogy, tweeted in response to Rowling’s comment, saying: “Actually the Naga mythology emerged from India. It traveled to Indonesia with the Indic/Hindu empires that emerged there in the early Common Era […] Nagin is a Sanskrit language word.”

It is also true that Nagin or Nagini is a part of Indonesian mythology – as pointed out by Agus Aris Munandar, a University of Indonesia archaeologist who has been studying Javanese temples for over 30 years. [Read more…]

Filmmaker Tanwarin Sukkhapisit has become the first transgender MP to be elected in Thailand, which held a vote for the first time since the 2014 military coup on Sunday (March 24).

Tanwarin ran as a candidate with the Future Forward Party, a political force founded a year ago which, according to unofficial results quoted in the Bangkok Post, is projected to become the third-largest party in the country.

Tanwarin, who identifies as bisexual and transgender, thanked supporters in a Facebook post: “Thank you for the hope of everyone who believes that we still want a new, good future together. Thank you from this little bisexual heart.” [Read more…] 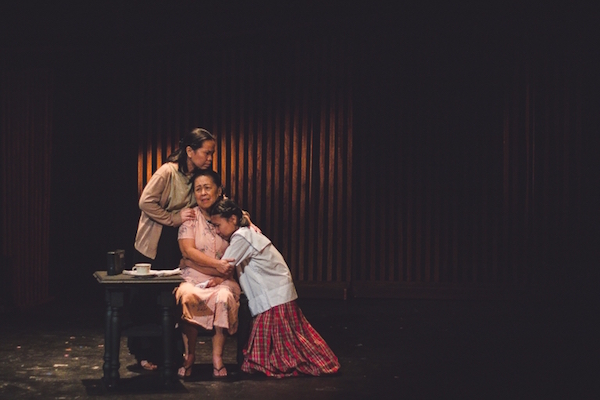 Manila — Some traumas are so severe that, though the mind tries to forget, the feeling always remains. Memories become hazy and details are forgotten, but sometimes out of nowhere, like a dam breaking, they come flooding in. For Maria Rosa Luna Henson, a radio announcement in 1992 brought forth the thundering jackboots, the prison devoid of sunlight, and the daily wails of six other women that she had tried to forget for nearly 50 years.

Henson is the subject of U.P. Playwrights’ Theatre’s “Nana Rosa,” which tells her story as the first Filipino comfort woman to speak publicly about her ordeal: nine months of sexual slavery at the hands of Imperial Japanese soldiers during World War II. When former comfort woman Kim Hak-sun of South Korea came forward with her story at a press conference in 1991, the event prompted a group of women to form the Task Force on Filipina Comfort Women, which appealed to several radio programs to broadcast their search for anyone with similar experience. The play follows the Task Force as they visit Henson’s past life. [Read more…]

KOTA BARU, March 20 — Kelantan will remain without cinemas, as it has been over the past 30 years.

The state government has decided it will not have the movie theatres in the state, said State Local Government, Housing and Health Committee chairman Izani Husin.

“We can impose strict conditions for cinema operators but there will still be room for social ills. After discussions, the government decided that there will be no cinemas in the state,” he said when winding up debate in the State Assembly today.

Yesterday, Mohd Syahbuddin Hashim (BN-Galas), when speaking during the debate on the royal address by the Sultan of Kelantan, Sultan Muhammad V, proposed that the state government allow Shariah-compliant cinemas in the state.

He said the people in the state had to go to neighbouring Terengganu to watch movies. [Read more…]

Today would have been the 143rd birthday of Thakhin Kodaw Hmaing, archenemy of the British colonial government, father of nationalist movements, one of Myanmar’s poet laureates and the winner of the Stalin Peace Prize. It is also the 43rd anniversary of a student protest against the Burma Socialist Programme Party (BSPP) held to mark the centenary of his birth.

Maung Lun, later known as Thakhin Kodaw Hmaing, was born on March 23, 1876 in Wale village in Bago Region’s Shwedaung Township. In 1894 he moved to Rangoon, where he began his career as a playwright.

In 1941, his reputation as an anti-colonial nationalist and prominent figure in Doh Bamar Asiayon (the We Burmans Association) earned him a place on the British authorities’ “Burma List”, making him an “enemy of the state”. [Read more…] 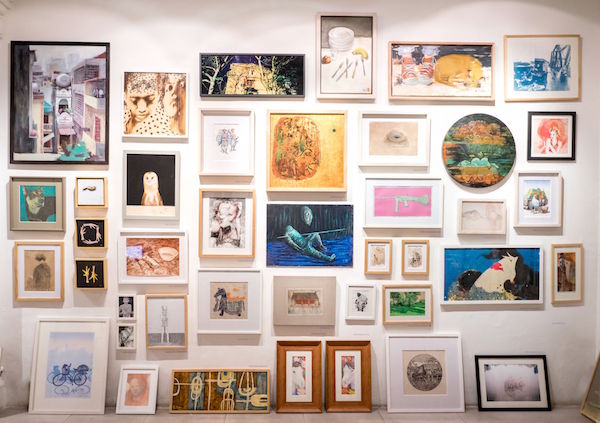 Art For You, the art fair organized by Hanoi-based Manzi Art Space and Workroom Four aimed at art enthusiasts who can’t afford to shop at high-end galleries, is coming to Saigon next week.

The fair began five years ago, and the upcoming event will be the 10th edition, followed shortly by the 11thedition, in Hanoi.

According to the organizers, “Art For You is an art fair and showcase that is geared towards selling art at prices the majority can afford, removing the sometimes-elitist nature of more traditional art gallery sales and create an event that is enjoyable, exciting and welcoming for those looking to pick up a bargain or just get some inspiration and discover new artists and their work.” [Read more…] 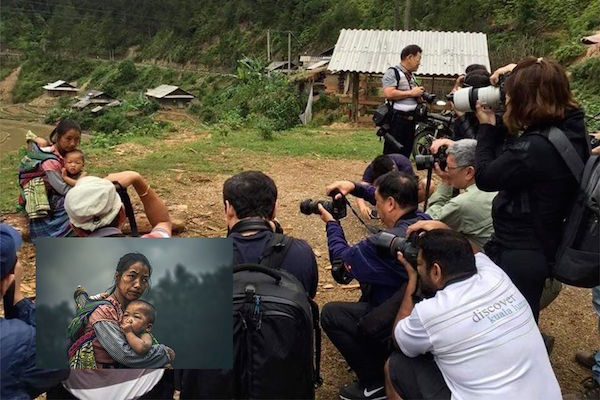 Ong, who works full time as a traditional Chinese medicine practitioner, received a cash prize of US$120,000. According to PDNPulse, the image was taken, unplanned, during his recent trip to Vietnam. In their statement on Facebook and Al Bayan, HIPA praises the image as evoking “intense emotion and shimmering glimmers of hope.”

“The picture shows a Vietnamese woman carrying two children. Later we know that she suffers from speech disorders, and it is difficult for her to speak. But this did not prevent her from continuing her life as a mother,” HIPA writes in Arabic. [Read more…]

The discussion also marked the opening of an exhibition, “Four decades since the fall of the Khmer Rouge.”

Classical dancer Om Yuvanna was 20 years old when the Khmer Rouge rolled their tanks and armored personnel carriers into Phnom Penh in April 1975.

Like other survivors, Yuvanna saw how the regime used the arts for propaganda, but has since seen how the arts can play an important role in the post-war healing process.

“I also do not want to be reminded of the past but it is important for the younger generation to know,” she said, speaking at a panel discussion at the 2019 Cambodia International Film Festival in Phnom Penh this month.

Now a traditional arts instructor at the Royal University of Fine Arts, Yuvanna, in her sixties, spoke about her personal experiences and the role of arts in the healing process. [Read more…]

Who are you, dear reader? From where are you reading this? From where do we speak, for whom? As clashes with immigrants rise, and indigenous peoples remain imperiled around the world, these questions have a vital urgency. These questions matter.

Vietnamese artist Nguyen Trinh Thi meditates on these questions in “Fifth Cinema” (2018), currently on display at the inaugural Elevation Laos in Vientiane and the 9th Asia Pacific Triennial (APT9) in Australia. For Nguyen — born in Vietnam and educated in the USA, after which she returned to Vietnam and married a US citizen — there are no easy answers. This is true for an increasing number of people in the world. Certainly, Nguyen’s personal geographies extend well beyond the modern nation state of Vietnam. [Read more…] 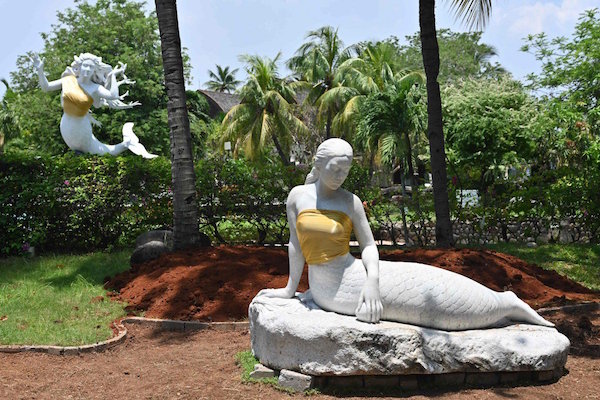 A pair of bare-breasted mermaid statues have been given the family values treatment at an Indonesian amusement park where officials slipped golden tube tops over their chests. While the nude statues have been on display for years at Jakarta’s Ancol Dreamland, a recent policy aimed at respecting “Eastern values” has seen the mermaids get a modest makeover. The statues were initially just covered with gold fabric, but they’ve now also been moved to a more secluded area after visitors kept pulling the coverings down, said park sources. [Read more…]