Even before watching Michelle Tan’s monologue, I am trying to say something true, the title struck me: the sentence-case format portends a quiet sense of conversational intimacy, compared to the conventional, title-case naming of theatre productions. The proclamation folds the struggle of confession with emotional vulnerability while the ambiguity of that “something” suggests the imprecision of language in articulating what feels important.

The third commissioned work for the Esplanade’s Studios series this year sees actress Ellison Tan performing an original monologue written by former resident playwright of Cake Theatre, Michelle Tan, under the direction of seasoned theatre-maker and educator T. Sasitharan. Michelle Tan’s first staged piece outside of her work with Cake – Electra (2016), Versus (2015) – moves away from the loud and fevered artistry that the company is known for, towards a theatrical experience that is quieter, stripped-down, introverted.

Intimacy, vulnerability and inarticulacy: these themes shape the monologue. It is narrated by a young woman named Risa as she shares, with her therapist and the audience, memories of love and loss, the death of her grandmother, losing her job after a nervous breakdown, and the inner conflict between her homosexuality and her Christian faith. She is stricken by internal contradictions.

Her destructive breakdown at work, triggered by an email loaded with corporate jargon, stems from her frustration with other people not being able to clearly say what they mean. Yet, in hindsight, she acknowledges her own inability to do the same. She is certain of her queerness within herself, but cannot admit it. She is religious, but she resents religion. She loves her grandmother, but she begrudges her. She loves words, but because of her perpetual state of cognitive dissonance they routinely fail her – such as when she responds to “You’re lesbian, right?” with “Uh, I’m graduating soon,” and when her only remark after reading a description of her grandmother’s death – strangled by a seatbelt in a car accident – is on the tragic irony of being killed by a tool of safety.

The disclosure strips away the façade of an apparently privileged and assured life to reveal a “fragmented, contradictory self”. I recall the phrase “radical vulnerability”, which stems from a quote by critical theorist Gayatri Spivak describing “a radical acceptance of vulnerability” as a process of continually paying attention to what is left out and what is unspoken of the grand narratives that shape and define our lives.

Spivak discusses radical vulnerability in the context of political philosophy, but it is just as applicable to how Risa dissects her personal life – by examining the voids left behind and the words left unsaid in the wake of her experiences rather than the experiences themselves. The events do not concern her so much as her inability to access and confront her feelings about them. 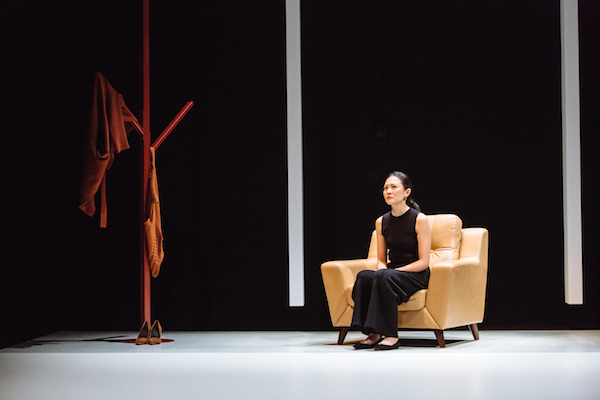 While it scans as a confessional, there is a sense of distance in the writing. I am trying to say something true is less interested in the catharsis of emotions than studying what it means to feel and from there, learning to sit with the unresolvable complexities of an experience. This restraint is mirrored in the direction, which is a muted and understated treatment of an already stoic script. There are a couple of points of heightened tension when emotions are strident, emphatic and palpable, and the direction has Risa pacing frenetically in circles, but otherwise, the performance feels sedate. Ellison Tan embodies Risa’s restraint and subdued pain well, although on the opening night that I attended, a few words and the ends of sentences were indistinct, perhaps swallowed up by the largeness and sparseness of the space.

It is a very text-centric art work, and I often wished I were reading this rich, layered piece of writing instead, to delve into Risa’s inscape a little longer. This script puts forth an examination of inner vacancy and a lingering sense of ambiguity, which for me, lend themselves more to literature than performance. 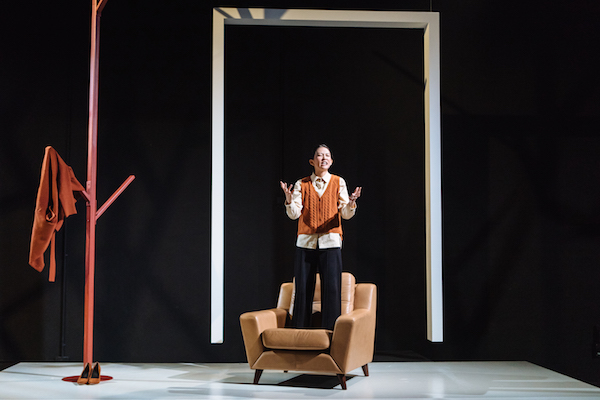 The technical aspects of the production complement the text well, cohering the sense of loss and absence that pervades the show. The minimalist set (designed by Chun Kaifeng, better known as a visual artist) quietly conveys the sense of something being missing. Towering metallic structures resembling trees devoid of leaves carry a feeling of cold barrenness where something organic should be growing. A large frame looms in the background, resembling an abstracted threshold without a base. It doubles as an incomplete frame of portraiture when Risa sits or stands before it, resembling her inchoate self-perception, or perhaps pointing to the notion that the self eludes completeness or definition. There is a bicycle suspended conspicuously in front, though it is never touched or looked at, even during a moving story about a childhood injury suffered after a fall – the bicycle then becomes another representation of a lived experience that is forever out of reach.

bani haykal’s sound design begins with distracting and unsettling ambient noise, such as the crinkling of plastic and a repetitive series of elevator announcements, assimilating the audience with the sometimes jarring and overbearing banality of life as Risa perceives it; it quickly moves to gentler and more unobtrusive music as we journey further into Risa’s headspace.

Towards the end, Risa’s therapist advises her that perhaps the only way to process loss and inarticulacy is to write about the very inability to do so – to say something true about the inaccessibility itself rather than the person or the experience that is now inaccessible. For a performance about the inadequacy of words, it is remarkable how exquisitely words are used to articulate inarticulacy, and how often it is emptiness that weighs heavier on the soul than pain does.

I am trying to say something true ran from 12 to 15 April 2018 at Esplanade – Theatres on the Bay as part of The Studios.