The inaugural Rainforest Fringe Festival (RFF), a prelude to the renowned annual Rainforest World Music Festival, ran from 7 to 16 July 2017 in Kuching, capital of the Malaysian state of Sarawak. The RFF is the brainchild of Joe Sidek, who’s also the artistic director of the Georgetown Festival in Penang. The RWMF takes place on the lush outskirts of the city at Sarawak Cultural Village, whereas the fringe festival took place right at the heart of Kuching.

While the “fringe” event may sound deceptively like a “side dish” to the music festival, the ten-day RFF 2017 was really as extensive and satiating as entire buffet of culture by itself: a eclectic smorgasbord of painting, photography, film, music, handicraft, fashion, and more. All this, housed in two neighbouring venues, the historic Old Court House and the Waterfront Hotel, a stone’s throw away from Sarawak River.

On behalf of ArtsEquator, I was invited to Kuching to experience the whirlwind opening weekend of the festival. There was so much to savour of the event, from the quaint and traditional (authentic Sarawak cuisine with live Sarawak bands) to the glamorous and edgy (Theatre of Clothes, a runway of fashion and indigenous tattoo design). My own solo jaunts through the city’s wayward little streets and colourful back alleys made the icing on a rich and delectable dessert.

Here’s a snapshot summary of the highlights of the festival.

The first gallery I visited showcased “Indigenous Grace”, an exhibition of photography by KF Wong, also known as the Father of Sarawak photography. Born in Sibu, he bought his first Kodak as a teenager and soon began venturing far into the hinterlands of Sarawak to document indigenous peoples. While his early work largely consists of clear and structured portraits, his later work reveals a sensitivity to the evocative effects of shadow and silhouette. 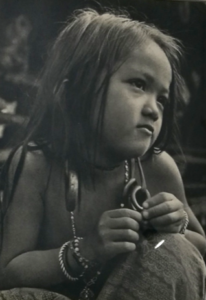 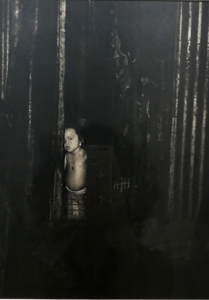 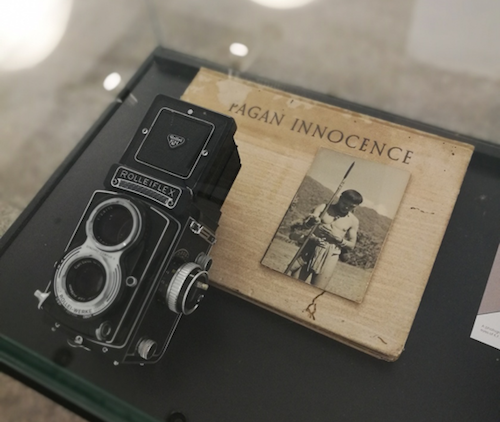 I wandered into a black space brightened by the curious glow of lightboxes. It was an exhibition of nature photography by Ch’ien C Lee, who trained in ecology and worked as an environmental educator in California before uprooting to the dense jungles of Southeast Asia.

Taken across Malaysia, the photographs present the remarkable intricacies of the natural world – the fine hairs along an ant’s body, the bottomless eyes of a leopard, the quirky camouflage qualities of trefoil bats and horned frog – details that are easily missed by the naked eye. Illuminated into sharper definition by lightboxes, the natural magic of the wild is magnified. 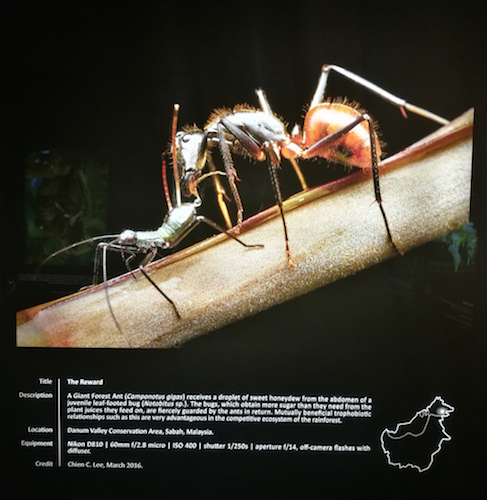 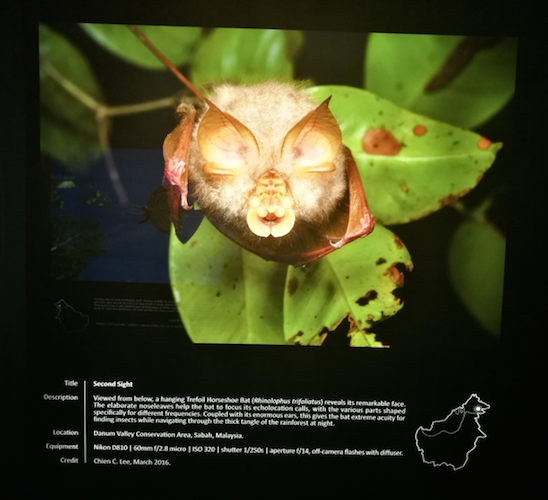 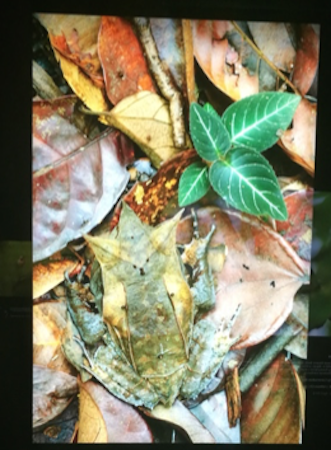 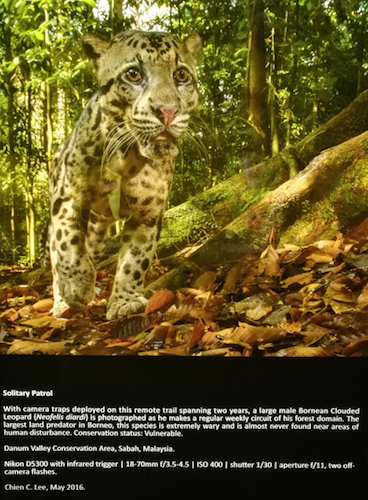 As I meandered around the quiet corridors of the Courthouse, glimpses of vibrant colours through the doors of a gallery drew me to the large, arresting canvasses of Raphael Scott Ahbeng. There’s barely enough space to stand back to take in the full scope of each work, like trying to view Rothko in a white cube. Sandwiched between them, it’s easy to feel transfixed by the thick, bold swathes of bright paint, that convey the violence and beauty of nature in its perpetual motions of destruction and re-growth.

There is something in his work that is earthy and tactile, yet imaginative and surreal. It’s what would happen if the inward-looking imagination of abstract expressionism married the visceral dynamic sensations of being out in a tropical rainforest. 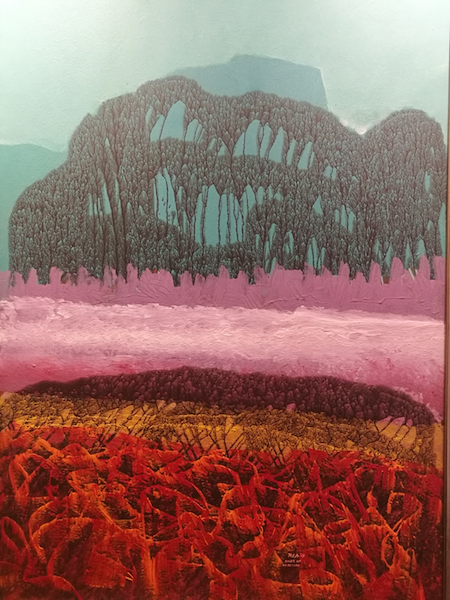 In the landing outside the KF Wong show, I found English forest sculptor Spencer Byles at work. 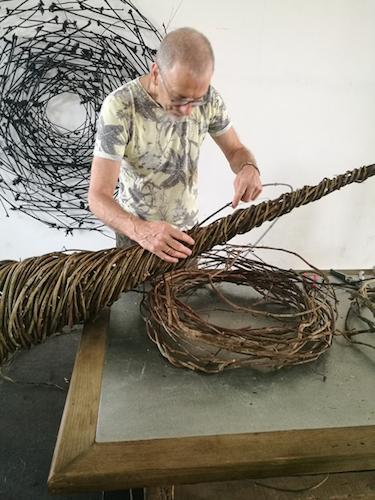 It’s a workspace distinctly different than what he’s used to. Previously based in the south of France, Spencer has been in Kuching for just about half a year, but it is deep in the woods that he is most at home. 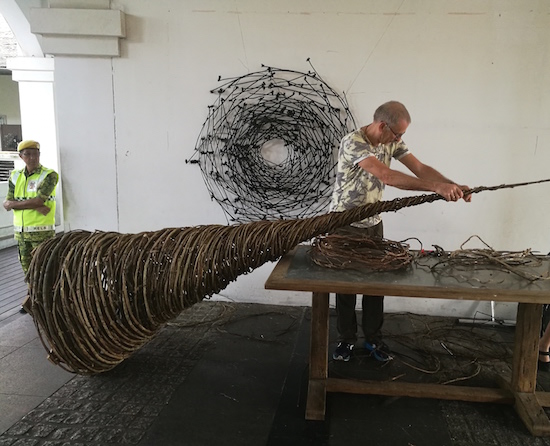 He usually works alone there, spending hours picking twigs and fauna to fashion them into otherworldly creations. They are usually displayed in situ, but for RFF 2017 he set up his installation on the concrete premises of the Old Courthouse. Despite the more urban setting, one can’t help imagining this earthy, conical structure as a portal to Rivendell, the elven realm from The Lord of the Rings. 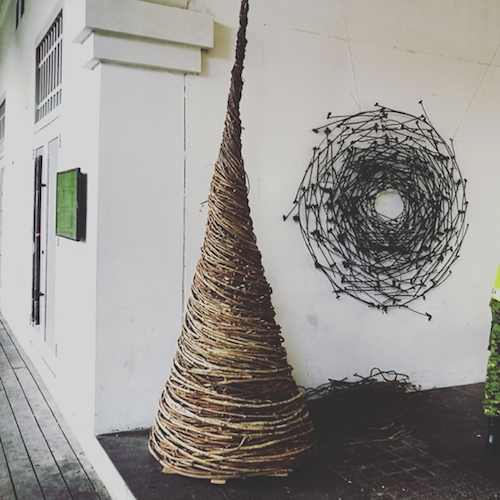 I met up with a chirpy artist duo from Penang, Sumay and Lay Hoon, who make up Otherhalf Studio. 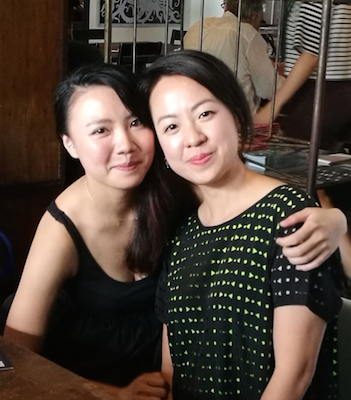 Together they put together a human-sized walk-in kaleidoscope named OH! Rainforest in front of the Old Courthouse. It comprises a single-screen projected animation of wildlife that unfolds across the mirrors placed on each side of the hexagonal structure, another unearthly and quite futuristic re-creation of immersion in nature. It wouldn’t be surprising in the near future to find this work set in the hi-tech landscape Singapore, near the ArtScience Museum or the National Museum, where similar works that cross the borders between technology, design and art draw crowds daily.

OH! Rainforest by Otherhalf Studio from ArtsEquator on Vimeo.
Music

On our final night at the festival we were treated to a kind of microcosm of the RWMF: Sada Kamek: Sounds of Sarawak. The line-up was made of Sarawak artists from wide-ranging backgrounds and genres, from traditional and acoustic (Alena Murang and Matthew Ngau) to contemporary and electric (Noh Salleh, Dayang Nurfaizah, Pete Kallang). Yet, “Sada Kamek” in Sarawakian Malay/Iban means “our music” and it was this sense of cultural belonging that weaves all the acts together.

One of the memorable moments of the night, for me, was when Alena and her mentor Matthew took to the stage with their sape (an instrument traditionally played by men only). As they sang stories in Iban about love and family, the natural tautness of their voices seemed to reverberate as it rose over and above the patchy sound system, into the still night air.

Another spectacle was At Adau, a six-person traditional band who seared the stage vigour and verve, luring a handful from the audience to let loose and dance at the bare space left in between the audience and the performance.

At Adau at Sada Kamek: Sounds of Sarawak from ArtsEquator on Vimeo.
If RFF were to be a forest, its roots run deep into Sarawak heritage. What stood out was how each event and showcase brought out flavours of Sarawak – while most international art festivals generally leverage on cosmopolitanism, it’s the rootedness and homeliness of RFF that gives it charm. Not surprisingly so much of the art on show was inspired by the rainforest and, coming from the ambitious concrete jungle of Singapore, it was a welcome change to immerse myself in a festival that so revered the magic and primacy of nature.

Akanksha Raja’s trip to RFF 2017 in Kuching, Sarawak, was made possible by Joe Sidek Productions. The Rainforest Fringe Festival was held in Kuching from 7 – 16 July 2017. For more information, visit their site here.