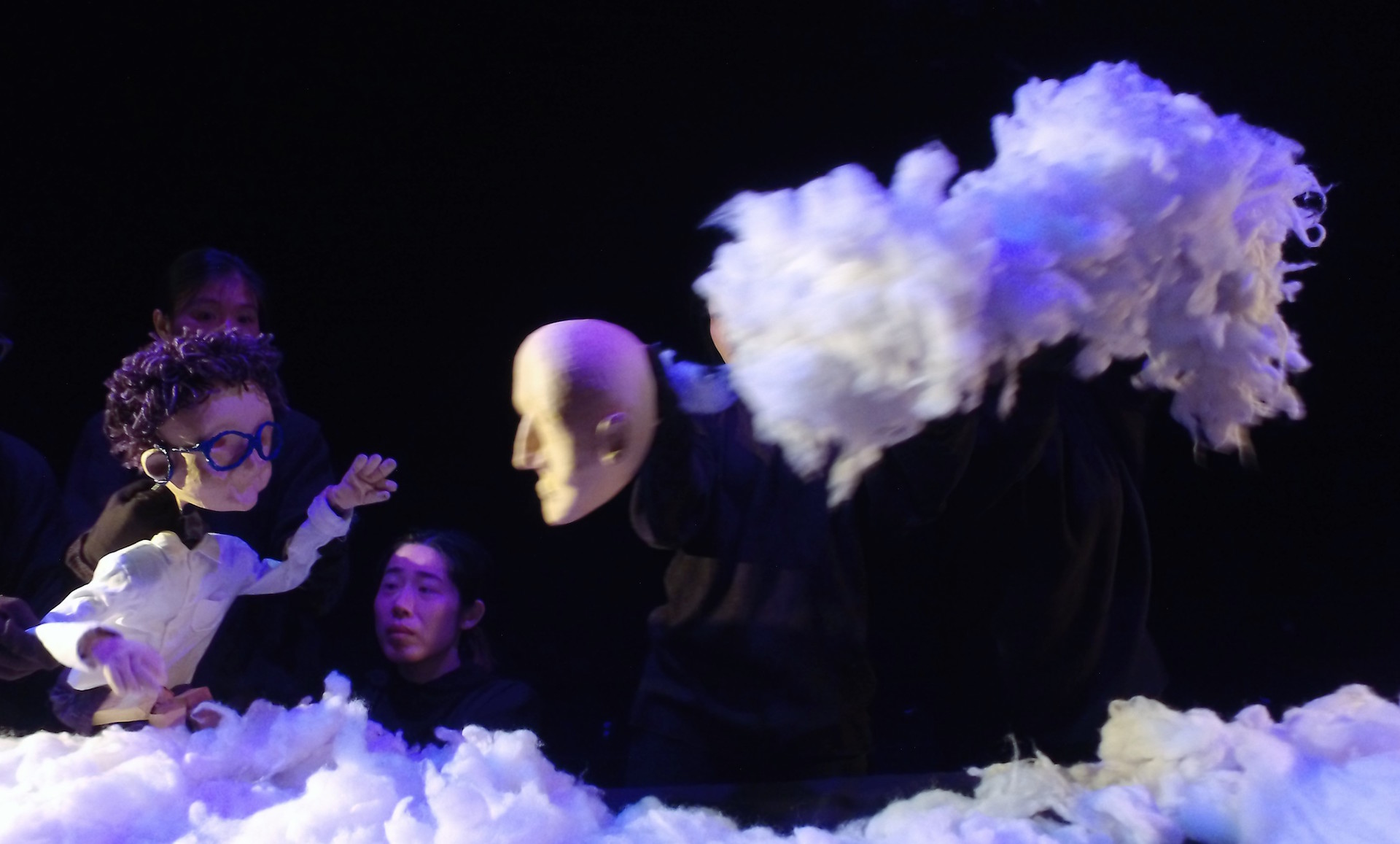 Illness, life, death: these performative themes have been explored by theatre makers extensively through the ages. However, what makes The Little Child unique is the imaginative and often whimsical way in which the performance explores the subjects. The director’s choice of puppets and performing objects takes the audience through a fantastical journey which challenges one’s perception of reality. The plot is deceptively simple, with two intertwining storylines, one of a boy falling asleep over his books while sitting by his father’s bedside in a hospital and another of a boy dealing with a critical illness. But the fantastical enters in the form of a small illuminated cloud which then explodes the plot into fanciful images drawn from the liminal space between dreams and reality.

The performance space is divided into the two main areas. The front of stage is a black cloth covered, waist level narrow platform, which is the playing area for the puppets; behind it, the puppeteers stand and manipulate the puppets. Upstage is the frame of a window through which some objects are manipulated. The five puppeteers, moving about the whole stage, use a variety of puppets and performing objects, including rod puppets, table lamps and fluffy cloud masses. 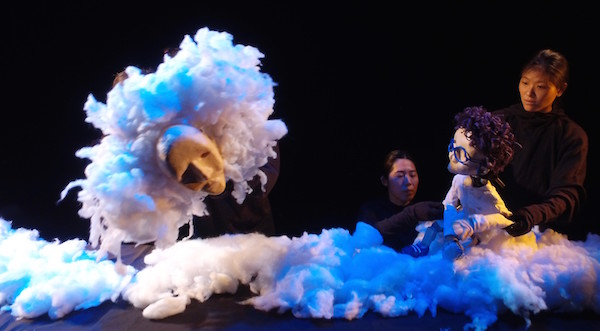 The story is told through a series of vignettes created through visual imagery and an aural score. As this is a non-verbal performance, it is left to the audience to interpret the visual and aural dramaturgy and make meaning out of it. Such is the case in any kind of production that could be termed “postdramatic”, where a verbal narrative is negligible or missing. “Postdramatic” is a concept extensively delineated by Hans –Thies Lehmann[1], a German theorist, who uses the term to describe a theatrical performance which decentres the text as a defining element in the production and reception of theatrical experience, making the text of the play an element neither more nor less central than movement, light and set design, sound or multimedia. Puppets and performing objects in postdramatic theatre become another element added to the above.

The performance begins with an obviously ill adult-puppet lying connected to an intravenous drip on the platform. A boy puppet, the son of the ill man, enters with a backpack and sits nearby. He takes out his homework and slowly dozes off. A small illuminated piece of cloud appears at the window and slowly the scene shifts to the son embarking on an adventurous journey bouncing through the clouds where the clouds are cleverly manipulated to form real and fantastical shapes. This scene morphs to another, where a different boy, in a hospital gown, wakes up to an animated table lamp. We are taken through a delightful sequence of interaction between the patient and the lamp, after which, he undergoes what appears to be brain surgery. In another sequence, the first boy meets the head of his father in the clouds – the implication being that the body is too diseased to exist even in this dreamlike state.  The son very poignantly offers up his body to his father by detaching his head from his own body. 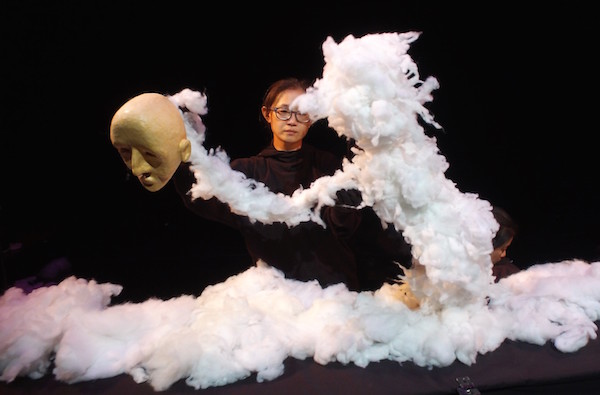 In a moving scene, the animated lamp attempts to get the very ill, operated-upon boy to wake up and start walking around. While the boy does wake up, he is unable to stand up and walk around. Finally, the patient pulls the plug on the lamp – perhaps a metaphoric foretelling of his own death. In the final sequence, all the puppets and objects rewind to the point where the son had fallen asleep. He slowly awakens, suggesting all that has passed might have been a dream. Or was it? The final image that the audience is left with is one where, as the boy leaves the hospital, he reaches into his pocket and pulls out a piece of cloud and looks at it rather quizzically.

While the narrative is moving, and thought provoking, it is the puppets and performing objects which are very cleverly and creatively manipulated by the puppeteers that make the performance. Unlike some traditional children’s puppet theatre where the puppeteers are hidden from view, in this performance, very much like the traditional Bunraku puppeteers of Japan, the puppeteers are seen by the audience. The visibility of the puppeteers allows the audience to witness the technique. At the same time, seeing the puppeteers’ concentration on the characters intensifies the audience’s focus. The boy puppet is at times manipulated by three puppeteers which create a full range of movements from walking to sitting to writing with a pencil. The lamp is brilliantly animated by the amazingly talented puppeteer who is able to make it express various emotions with just the way in which it is moved. The animated fluffy clouds, by creative manipulation, suggest various shapes which challenge the imagination of the audience. 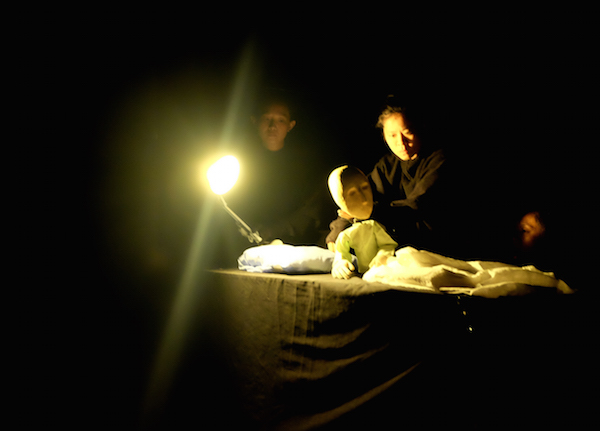 The director, Wei Chun-Chan, in the programme booklet speaks of cloud gazing and little boys as the inspiration for the performance. He also mentions that, as the target audience for the M1 Chinese Theatre Festival included children, they edited out a sequence of a boy creating a body out of trash for his diseased parent that they felt might be disturbing for the children. What they did not edit out as it was central to the story was the father’s head. While a disembodied head in reality could scare children, the amazing facility of puppets to straddle the line between being real and being an object provided the necessary distance to view it without fear. Further, a puppet is a natural transgressor and has the ability to cross boundaries with ease, whether between life and death, reality and illusion or even time and space. Thus, the audience accepts and assimilates the various bizarre images it sees on the stage. This is why, in his exploration of the themes in The Little Child, the director’s choice of using puppets and performing objects is truly inspired.

The Little Child is a puppetry performance by Short One Player (Taiwan) that took place at Centre 42 Black Box from 16 to 20 August 2017 at the M1 Chinese Theatre Festival organised by The Theatre Practice. This review is based on the performance on 18 August, 8PM.

Guest Contributor Soumya Varma comes from a family of theatre activists and has been involved in theatre since her childhood. In a theatre career spanning twenty years, she has worked variously as an actor, director, stage designer, producer, dramaturge and teacher. She did her theatre training in the Ninasam Theatre Institute in India. Recently she completed a Masters by Research in Theatre Studies from the National University of Singapore. Her thesis “Puppet on a String: Paradigms, Processes and Practices of The Finger Players” is based on the productions of The Finger Players. The nine critical essays that she has written about The Finger Players’ productions are included in their Fifteenth Anniversary Collection of Plays released in October 2014. She is currently teaching as a part-time teacher at Lasalle College of Arts and pursuing her other interests in theatre.