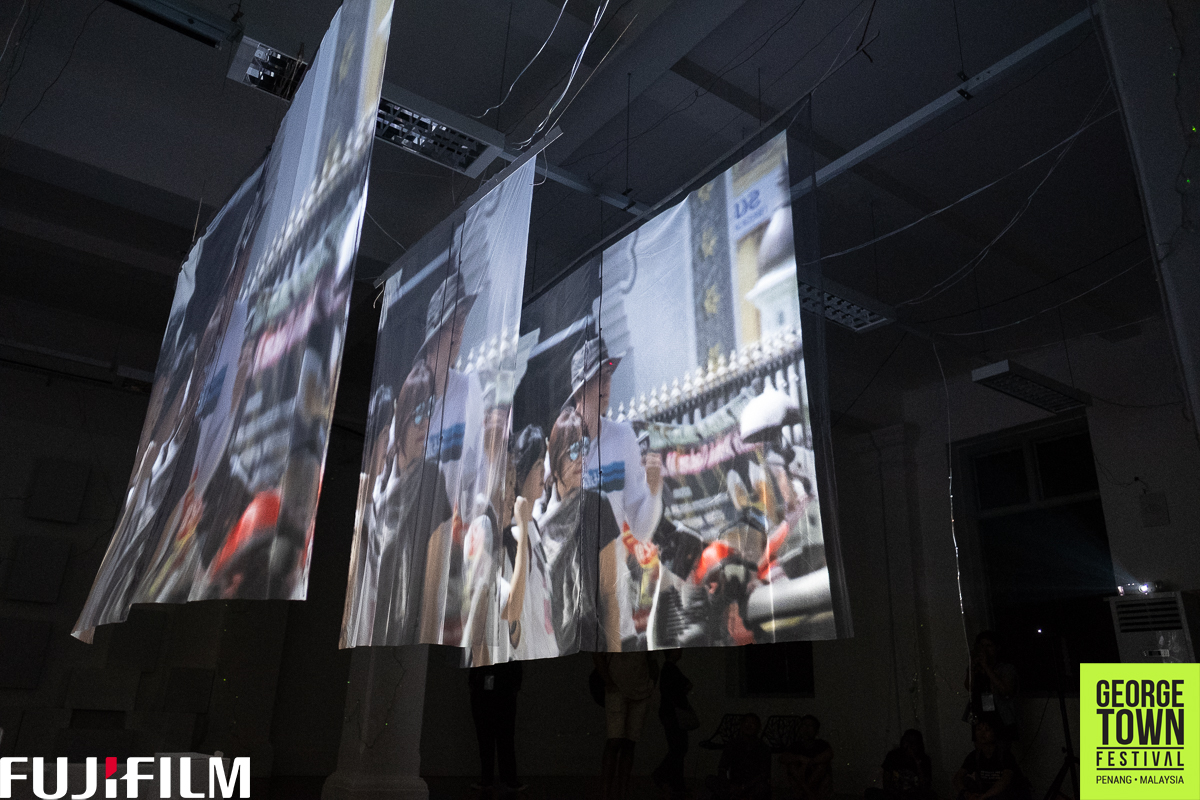 Prior to stepping into the mystifying world of The Misinterpreted Futures of George Town 2068, I was curious and fascinated by that science-fictioney title, coupled with the exciting premise of a performance with no performers: the technical elements of the show (lights, sound design, video projections) perform in lieu of human bodies. The programme synopsis states the show “imagines a day in a life in George Town, in the future, inspired by the hopes, fears and aspirations of its people.”

It sounds simple enough. But I was unprepared for just how puzzled and bewildered I would be. The work does not clarify what a misinterpreted future is. How can one interpret, and by extension, misinterpret something that hasn’t happened yet? I was confronted with a dynamic moodboard in the form of lights, sound design, and video projections, but I couldn’t tell if I was perceiving a vision of a future, visions of disparate futures stitched together, or interpretations (decidedly flawed ones) of the future(s). Moreover, the programme booklet and publicity make no mention of the artists or anyone on the crew. This work is plugged as a performance of objects, of elements of technology, implying, presumably, that the objects have their own agency. Yet the operators of the technology were often in full view, making me suspect 2068 of being a work of theatrical tricks motivated by formalistic experimentations instead. As a result, the viewer is left with questions about the work’s confounding opacity rather than 2068’s purported concerns on futures and the ways we imagine, mis-imagine, analyse them.

As the performance went on I found myself instinctively straining to make meaning out of what I was perceiving, to find patterns in the lights, sounds and images that might help me derive a systematic vocabulary with which to read this work, but all cues seemed arbitrary. At the same time, the wording of the title compelled me to continually question if my interpretations were flawed. If the title suggests that the act of interpretation is fallacious, is the work daring me to do it?

2068 takes place in a large room on the second floor of Wisma Yeap Chor Ee, Penang. There are various types of electric lights on each wall, including coloured LED string lights, white tubelights, and neon lights. Overhead is a crisscross of cables, and in the centre of the room is a cluster of white boxes of various sizes somewhat resembling a miniature landscape of buildings – an interpretation of a city although there is nothing distinguishably George Town or Penang about this landscape. It is squared by four pillars showing small neon lights in the shape of abstract geometric symbols – a triangle, a house, an angular leaf – and the word “welcome” in different languages. They arbitrarily vary in intensity throughout the duration of the piece. Above the “mini-city” of boxes hang a series of translucent veils (á la Bill Viola’s 1995 The Veiling) on which video sequences are projected. Most of them screen sepia-toned or old black and white footage of Penang street scenes, but some are in colour and feature contemporary street scenes. At some points, the images distort frenetically. I consider the relevance of images of the past in a work about futures, and how our present-day conception of the future may be based on a distorted perception of the early to recent past.

On one wall are mounted boxes which serve as screens for video projections, most prominently used in one segment to simulate TV sets showing the same (fake) ads on loop advertising cars, Japanese food, or French perfume. The ads themselves resemble commercials from the present. Surrounding the mini-screens are neon text placards declaring “Me First”, “The Best”, “The Original”. A sense of ennui suffuses me amidst the repetitive drone of consumerism on the mini-screens and the disembodied, lonely-looking placards screaming their superlatives in reference to nothing and addressed to no-one. It bothers me that imaginations of possible futures seem to be dominated by uninspiring distortions of the present.

Throughout the performance, the audience is invited to roam around the room freely, to sit on the handful of chairs available, or on the floor, and to touch the installation. Few do, and all of us remain unaware that the boxes clustered in the centre of the space are to be opened, revealing another layer to the installation. At one point, when the lights are dimmed, an usher has to encourage a spectator to do so. The young man beside me gingerly reaches out to open the box, like a door to a secret room. The rest of the group follow suit, to reveal more cryptic messages in different languages – some trite proverbs, like “Don’t look a gift horse in the mouth”, others witty, “Beware of Brits Bearing Gifts”, others curiously personal, such as “All kind of places and groups of people who have an admirable history would almost certainly distance themselves from me.” The boxes open to reveal small, abstract paper sculptures lit by colourful LED lights from within the boxes.

As I left the room, I decided to put my ever-growing list of questions to rest and let the experience wash over me like the enigma of a dream. What will a day in George Town in 2068 look like? It may or may not be dissimilar to the world we live in today, and it may or may not be full of abstract neon lights, and mysterious messages on the doorways of secret rooms, but I somehow doubt this dense and divergent showcase would come close to doing it justice.

The Misinterpreted Futures of George Town 2068 took place at Wisma Yeap Chor Ee, Penang, on 1 – 2 September as part of the George Town Festival 2018.