As told to Akanksha Raja

In the latest instalment in our series covering independent art spaces in Southeast Asia, ArtsEquator.com spoke with artist Seelan Palay to learn about his practice, his inspirations, and his journey setting up the independent alternative art space Coda Culture, at 803 King George’s Avenue in Singapore. Here’s what he shared with us.

I’ve held onto this name and the idea of this independent art space for five years. It was largely inspired by the spaces I’d been to before: Post Museum, Your Mother Gallery , p-10, Plastique Kinetic Worms, and also in the region: Krack and Ace House Collective in Yogyakarta, and spaces in the Philippines, Malaysia, Myanmar, where often shows happen without funding, with people coming together and just making things happen.

Coda is usually the end of a piece of music, or it’s the epilogue of a play, where the lives of the characters continue after the show. Put together with the word Culture, it’s meant to signify the end of certain cultures and the beginning of new ones, or an amalgamation of both – it’s also open to how people want to read it.

All the shows that we present here are meant to push boundaries, whether they’re aesthetic boundaries, conceptual boundaries, or boundaries in terms of presentation. You don’t just put things on the wall; you have an entire room, so do something different with the space, challenge yourself and challenge your audience. Usually the walls are grey, but for Rizman Putra’s show, “The Labyrinth of Things”, it was white, for nor’s show, “In Love”, it was pink, and before that we had UV lighting. So that’s usually a conversation between me and the artist. There’s no curation in that sense; it’s always a conversation on how we can present things in a new way. We also discuss how we split the costs: for example, for nor’s show, she paid for printing the photographs and the wall paint; I paid for the catalogue, the reception, and the rent.

nor’s “In Love” came together through a three-month performative process of a simulated relationship, after which she had a whole series of photographs and letters that documented it. She was approached by a publisher to put it out as a photobook, and the design and the layout was all finished. The publisher said they had to send it to the IMDA for licensing, and IMDA turned it down. There’s no nudity in the images, it’s just the illusion of gender-bending. She approached me and showed me the publication. We put the photographs and the letters together. I saw that some of her photographs looked like a living room, so we produced a very similar bed in the centre of the room. Without an independent space like this or others, such a work would not be realised.

I come from a kind of DIY punk scene, where being independent is the way we do things. I studied painting at LASALLE over 12 years ago. After I was expelled due to one of my works, I went straight into art practice, applying the same DIY ideas. My first solo exhibition (“Seelan Palay: Solo Exhibition”, 2009) at Your Mother Gallery – that was completely independent and DIY. I didn’t apply for funding and I did everything myself, in collaboration with the gallery. Some of my work touches on socio-political themes and some don’t, but I guess the state didn’t quite like my practice.

In 2011 there was a group performance art show – R.I.T.E.S. (Rooted In The Ephemeral Speak) – at the Substation. The organisers were told that they wouldn’t get the licence if my name was on the bill. I hadn’t applied for funding, so I didn’t know what the state’s position was. From that incident I realised the dynamics between myself and the institution. It has cemented my views on how I need to practice and if I’m serious about continuing. That’s what inspired me to set up an independent space where artists can come and say whatever they want – the idea is to keep making work. Every artist that shows here, I tell them, “Treat this show as a stepping stone, as a learning experience. You’re free to do whatever you want.” What’s more important is what they do after. 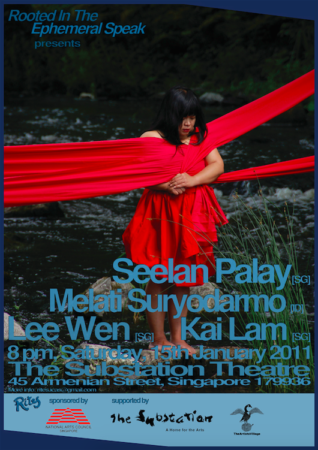 What (spaces like) The Substation and Your Mother Gallery provided me, as an emerging artist, was something very similar to what I’m trying to provide here myself. I was in my late 20s, and I was clueless about how to continue doing what I do, and they provided open and free space: “open” meaning without censorship, and very supportive of what I wanted to express; “free space” in the sense that they didn’t charge for anything to run the show. They took a cut from what was sold, so really I think I’m continuing that same practice. We do a 70-30 cut on all sales here.

nor’s exhibition opening got 120 people. Someone told me that there are more people coming to the opening here than in Gillman Barracks. It’s not a competition, but if that’s happening, my question is, why? Maybe it’s just too far away. Also, we’re open longer hours, we put the food and drinks out in the corridor, and people stay all night. That’s not possible in other galleries because they are run by staff, they have closing times, and there is a (social) barrier to entry. Independent spaces have the ability to create something very horizontal. At an opening in an independent art space, you get people from Singapore Art Museum, people from commercial galleries, private collectors, students, even people from graphic design, film, music. I personally do not want to create a community. That’s kind of like saying “This is my community, we are elite and you are not.” Everyone should go and mingle and meet. That was a lot of what The Substation was in the 90s.

I work part-time to fund this place. I sell my own works, to raise the money to build the brand so that artists can do things. I signed a one-year lease. One thing you learn from other spaces – to get a cheaper rate you’d sign two or three years or something, but if it’s not sustainable, you suffer. So I signed a one-year lease. It’s not about whether I have to close in December, it’s about how much the space can achieve before it closes. It’s about the community of artists that came together and used these walls to do something.

There’s a sense amongst the younger, newer artists and artist-run spaces, that maybe we don’t need funding, if we can be self-sustaining and do our own thing, and it gives us autonomy and freedom in curation; there’s no need to go up and down with bureaucracy. “The show costs $2000, but they’ll only give us $1000, now what are we going to do?” Even Alan Oei, he was saying at the panel discussion on independent art spaces that when he was running his own space Evil Empire, he felt he could just plan whatever he wanted, and everything would fall into place. The Substation is more bureaucratic; it’s tedious to go through. Whereas with independent spaces it’s direct: you’re the artist, I’m the owner, you’ve got some friends who can help, I’ve got some friends who can help. It’s very easy, very direct and fast. So I feel that’s the prime push for independent spaces. Not necessarily the issue of censorship or control.

Coda Culture is not against the idea of state money. It’s rather trying to say that you can do that, but you can also do other things. Just because you don’t have funding for your show doesn’t mean you can’t do it. I’m saying, let’s just find ways to help each other and exist.

This interview has been condensed and edited for length and clarity by Akanksha Raja, ArtsEquator’s assistant editor. The interview took place in early August this year at Coda Culture, between nor’s “In Love” (14 – 21 July) and ila’s “The Spirit of Echoes” (14 – 23 September).

Seelan Palay is currently serving a sentence of two weeks’ imprisonment after being convicted of conducting a one-man procession without a permit under the Public Order Act. He was arrested in October 2017 after walking alone with an artwork from Hong Lim Park to the National Gallery and then to Parliament House, as part of a performance art piece titled “32 Years: The Interrogation of a Mirror”.

This is part of ArtsEquator’s ongoing series on contemporary arts spaces in Southeast Asia and their founders.

The artist, nor, requested an update of their name on 10 September 2020.