“Language is born from imagination, and imagination is what makes language real. Without language, we have no memory: therefore, literacy (the mastery of language) is important. Our sense of language is the most intimate access to what is real, and our literature is our people’s memory; through language, we reach another people’s memory.” – Gémino Abad

To commemorate the 50th anniversary of the formation of the ASEAN, the Singapore Writers Festival 2017 included in its programme six ASEAN 50 Events. I attended two of the panel discussions, one on each weekend of the 10-day SWF: “Imagining Community”, and “All (F)or One: The Diversity Dilemma”. 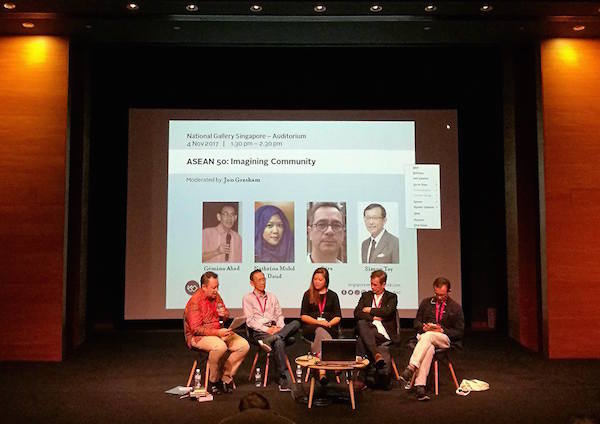 The title refers to historian Benedict Anderson’s notion that the identity of a nation is constructed by the collective imagination of those within it. The panel asks if there can be a communal Southeast Asian imagination that encompasses ASEAN, and what the role of literature is in shaping that imagination (and, possibly, identity)?

“All (F)or One? The Diversity Dilemma” featured the prolific Singaporean writer Robert Yeo, younger Singaporean writer Clara Chow, Laotian writer and publisher Dokked, and Malaysian music composer and writer Saidah Rastam, moderated by William Phuan. This discussion deepened the conversation from the previous panel, pointing out that there is such a plethora of diversities within Southeast Asian countries. How then can the ASEAN motto – ‘One Vision, One Identity, One Community’ – be realised? 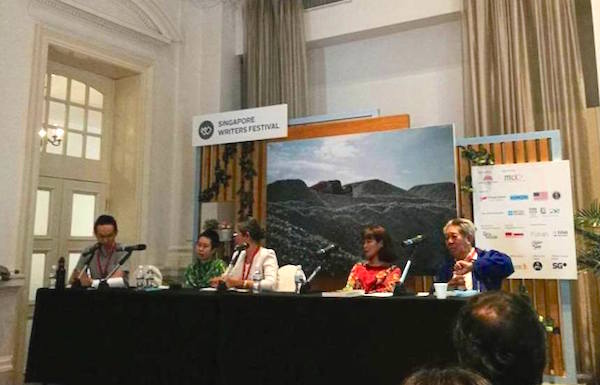 The questions in each discussion stirred up a multiplicity of insights, but two clear overarching questions weaved through them:

1) How may Southeast Asian countries reconcile their individual peculiarities (e.g. ethnic/linguistic diversities within each country) and concerns with the pursuit of a sense of belonging to be part of a larger unified region -the superstructure of ASEAN?

2) How do we allow literatures of different cultures and countries to start speaking with each other, to venture towards a sense of unity among ASEAN nations?

With regard to the first question, some panellists from both events shared a conception of ASEAN as being a supranational organisation held together more by economic and political policy than cultural; this shared sentiment – of ASEAN as somewhat bureaucratic, hard-power overlord, bordered on cynicism towards the value of ASEAN cultural initiatives. Singaporean writer Simon Tay emphasised that he hoped in future to see “a more human face” to ASEAN: not necessarily a literary face, but a human one.

Saidah Rastam, during the second panel, asserted that cultural exchanges have been going on in this region long before ASEAN, from P Ramlee to the Soliano family (Rufino, Alfonso) to kroncong: a form of Indonesian music that gained popularity in the region. She felt such organic fusions, migrations, “cross-pollinations” have continued to happen and will continue to happen independent of ASEAN policy. She seemed to echo Simon Tay’s desire for a “human” face to ASEAN as she opined that ASEAN was “a framework born in seminar rooms, not in the street.” Although she felt cultural exchange could happen on a more grassroots level, she acknowledged ASEAN initiatives do bear fruit, “however small, they are succulent”.

Clara Chow’s attitude towards ASEAN was warmer. As a writer-resident at the ASEAN Literary Festival in Jakarta which housed her with writers from across Southeast Asia; through her personal conversations with ASEAN writers, she grew an understanding of their literatures and sociocultural multifariousness. She felt, given such innumerable kinds of diversity within countries and within the region, it might seem unreasonable to conceive of ASEAN with a sense of “Oneness” like its motto, but rather it must be an aspiration. “We need to come together, but know that we are coming together not as monolithic entities but as a diversity of identities. It is imaginative hard work to keep telling ourselves “we’re different, but same”, but we have to keep doing it.”

The point about the diversity of identities within individual countries is also pertinent to question (2). Dokked’s sharing gave us a sense of the diversity in Laos: 40 different ethnolinguistic groups, most of whom have no written orthography, the most well-known exception being Lao. After encountering several Laotians who were unfamiliar with any other Laotian language, Dokked realised that education was lacking, and strongly advocates for the teaching of multiple languages in school. Re-contextualising this idea to Singapore, Clara felt that Singapore school students must be given the chance to study (unexamined) another Southeast Asian language, to instil a sensitivity to the region from adolescence, and to develop capability for translation practices.

Speakers on both panels strongly supported the idea of a lingua franca, and most agreed that English was the common language. Kathrina Mohd Daud, writer and teacher from the University Brunei Darrusalam, cited a few Brunei novels written in English, but publishers have a role to play in boosting distribution within the region: for example KH Lim’s Written in Black, a Bruneian novel published by Singapore publisher Monsoon.

In sum, the overarching points of agreement across these interactions were:

2) The idea of an ASEAN “Oneness” is an ideal, but one that we must strive for to close the gaps between our differences: borders after all are only imaginary. ASEAN’s initiatives for cultural bonding have thus far borne good fruit but more could be done. Meanwhile, cultural exchanges are always happening, such as the Singapore Writers’ Festival.