By Akanksha Raja and Clara Cheong

There’s fresh blood on the theatre scene and ArtsEquator sent out two young reviewers to watch emerging performing art collective The Kaizen M.D.’s latest production “Move ___, as we move”, staged at Centre 42. Here’s what they thought about it. 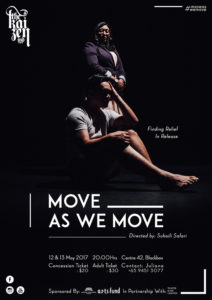 Akanksha: Move was conceived and written by KayKay Nizam. It’s semi-autobiographical, retelling the trauma of divorce on a child and the repercussive aftershocks rippling through his adult life. It’s a two-hander, with KayKay, playing K, and Pramiila Pam as his therapist Dr Kumar, but they continually take on other roles as they re-enact a play that the ‘patient’ K has written through the course of his therapy.

To me the strength of the script was in its rawness and reminded me, at its best, of certain aspects of Haresh Sharma’s writing. There was emotional depth and complexity and some fine use of poetry, imagery, motifs to communicate characters’ pain or trauma. We see the repeated idea of natural cycles – water cycles, astronomical cycles, to contrast the illogic and unpredictability of human experience/emotion, and the conflict in K’s character because of his need for logical explanation.

Clara: Yes! I see a parallel with Sharma’s “Best of”, which also features a protagonist who struggles with forgiveness and moving on. I especially love the use of colloquial language, which is also a trademark of Sharma’s works. It made the struggles and life of the characters relatable and personable.

A: This sense of realness and relatability contrasts the non-linear or non-logical structure of the story (another feature of many Sharma works) – which moves between the present-day doctor’s office, to K’s childhood at home. The characters also move between different roles, K as himself but also his mother’s second husband, Dr Kumar playing K’s mother but also commenting on herself playing the roles – “I can’t play another wife! I’m not that good an actor!” There are a couple of layers of reality here. There is Nizam, the playwright whose real life experience forms the basis of the play, and then there is the character, K whose childhood trauma is relayed via the play he writes as part of his therapy.

C: I loved the idea of a play within a play! In the breakaway from K’s play back to the doctor’s office, I found myself empathising with K’s plight as I gain an understanding of his psychological conflicts. When it returned to the semi-autobiographical play within a play, I was drawn into K’s play such that I forgot it was a work of fiction. Your point about the use of metaphors – they present K as a logic driven individual painfully burdened with his parent’s volatile marriage and divorce, and eventually his own.

A: A key message of this play is the therapeutic power of storytelling as a way to reconcile with our past. Nizam is undoubtedly speaking of himself when K says “I’m writing this play to heal”. Of course it’s not easy. We see K struggling to make sense of his life, to find patterns which are essentially predictable and measurable. Like how he’s memorised the monthly allowance his dad used to give him in school, because that’s the only thing he believes quantified his value as a child, as if his worth is measured by money he receives from his dad rather than the unquantifiable love he never received: time spent together, conversation, encouragement, support. His father wasn’t present when he got his PSLE result.

C: I actually felt emotional pain for K when he was presenting his mathematical analysis of “how rain forms” to his doctor. His statistical breakdown of the chances of rain occurring really revealed the conflict that he continuously struggles with due to his natural logical disposition, versus the unpredictable metamorphic disorder that was his life. It hurts because we were all just watching helplessly on as K grasp at numbers and statistics to evaluate the unquantifiable humanness of being alive.

A:  “Unquantifiable humanness”, nice. He struggles to find logic within things that aren’t logical. How did you think the multimedia projections (projected images of rooms, HDB backdrops, etc.) brought out the impact of the story? Did it or did it not?

C: That bed! I loved that it doubled up as a projection screen. I thought it was such a simple yet creative design. But there were definitely times during the play that I wish the projections didn’t overlap onto the cast as they were acting.

A: At certain points, that overlap worked K standing in the rain as it slowly turned into jellyfish was a pretty image.

C: But overall, the production was carried by the strength of the dialogue and the acting, rather than the much publicised use of multimedia. 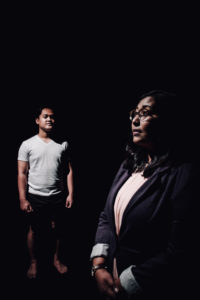 A: The white bed was a strong visual and metaphorical prop. I like that it was upright, turning something that is meant to be comforting, a place of rest, into something more imposing. The reconfiguration meant that K always has to stand while ostensibly lying on the bed, signifying his estrangement from any sense of comfort or home.

C: When they showed K ‘lying’ in bed recounting the physical comfort that his mother provides and a pair of arms came through the slit in the bed sheets to grab him – this was one of my favourite scenes from the play as I felt that they really manifested the nightmarish aspects of K’s psychology. Which to me was where the use of interdisciplinary elements really came through.

A: That scene of the arms, sucking him in, before he is thrown back out through the slit – it did seem like an image of…

C: …both birth and rejection from his mother!

A: Yes, it did seem like a metaphor for the entire relationship dynamic with his mother, so close he is sucked into her life but he also feels rejected by her.

C: We see him combining his anger towards his father with empathy for his mother.  When she finally forgives his father, he feels betrayed. I think emotional abandonment was a key aspect of the story. K is continually abandoned and responds to his wife’s suicide by internalising it, taking responsibility for her death, believing that he pushed her out the window. Wanting to give logic to the inevitability of the human condition: the fact that things end, that relationships and people are imperfect and that the state of any relationship can’t last forever – is very characteristic of K.

A: Last but not least, the movement. Movement director (and founder of The Kaizen M.D.) Norisham Osman imbued the story with a physicality that was exciting. The play succeeds because of the compatibility of the writing and physicality, tender and intense. I especially loved the intertwining, clinging push-and-pull during Pam’s listing of “top ten things not to tell someone going through a divorce”. There were some clever use of contrasts  – the wry frivolity of the items on that list, like “don’t worry, 50% of people get divorced!”, juxtaposed with Pam’s voice that’s increasingly strained with helplessness as she pleads with her “second husband” not to leave, set against the dance of their limbs rolling over and against each other. These choreographic choices helped illustrate the dynamics of a bad relationship.

C: Yes, these moments of physical lyricality helped to balance out an otherwise heavy script. I’m looking forward to seeing more of this company.

The Kaizen M.D.’s Move ___, as we move was written by KayKay Nizam, performed by KayKay Nizam alongside Pramiila Pam, and directed by Suhaili Safari. It played at the Centre 42 Black Box from 12 to 13 May 2017.