Skip to content
MC Redioca discusses the significance of archiving as a form of activism during the recent elections in Philippines on May 9th. This article is published as part of the inaugural AE x Goethe-Institut Critical Writing Micro-Residency 2021/2022.

Though books may be burnt, truth lives on in people and archives. The act of archiving can be activism in itself, especially when a country is up against a fascist political dynasty that wields historical revisionism and cultural capital to reinstate tyranny. And with technology and the internet, the possibility of peer-to-peer sharing, open-source support, and decentralized archives are potent means for a nation to hold its ground.

On the evening of May 9, the Philippine public waited with bated breath as reports on the election results rolled in. The votes of Ferdinand “Bongbong” Marcos, Jr. soared above that of his rivals, in a historic and alarming landslide of 31 million votes despite his family’s track record of corruption and blood. His return was largely powered by a widespread and deeply rooted campaign of disinformation, funded by their ill-gotten wealth and the self-interests of greedy politicians and oligarchs.

Voting is neither the beginning or end of the process of dismantling structures of oppression when one is up against a political dynasty. Online, youth and grassroots organizations shared tips and information for voters to protect the integrity of their ballots amidst the reports of malfunctioning vote-counting machines. Citizen reports of vote-buying and suspicious activity were reported on social media. Kontra Daya verified citizen reports of illegal campaigning, sabotaging ballots, vote-buying, and an alarmingly high occurrence of malfunctioning ballot-counting machines.

The night of the elections was one steeped in grief and uncertainty. Artists and activists had spent the months leading up to this pivotal election with organized efforts to combat propaganda and rectify historical revisionism. Yet here we were, with a president-elect whose family was known to be criminals by the international community. People took the time to mourn solemnly, thinking of the battle ahead. Then came the expressions of dissent and protest springing forth from artists and cultural workers, against the accusations of sedition and insurgency directed towards truth speaking to bloody power.

The day after the elections, student organizations and activist groups gathered in front of the main COMELEC (Commission on Elections) office in Intramuros, and marched to the city square, Liwasang Bonifaction, where they set up a three-day vigil. The protest culminated in a rally headed towards the Philippine International Convention Center, where the COMELEC was processing votes. However, these citizens exercising their due right to peaceful assembly were halted by a police barricade right by the Cultural Center of the Philippines, which was one of the many structures that Marcos Sr. consigned to the arts during his presidency. The Marcos knew that funding art institutions would also wedge themselves as benevolent patrons in history and cultural memory.

But of course, a building constructed upon a shaky foundation is bound to fall to pieces. The official website of the Philippine Museum and Library, which holds official records about Martial Law, was taken down in the week following the elections. Government officials were quick to quash potential threats, and were met with intensified efforts to defend the truth. Ateneo De Manila University Library released PDFs of their books about Martial Law to download for free. Filmmaker Kip Oebanda also uploaded his film Liway (2018), which was based on his experience growing up in detention with his parents who were taken prisoner during Martial Law, for people to remix and share freely.

Adarna House announced the sale of a bundle of children’s books about Martial Law, drawing the ire of the chief of the National Intelligence Coordinating Agency (NICA), Director General Alex Paul Monteagudo. He accused the publisher of “subtly radical[izing] the Filipino children against our government.” Yet how could children’s books such as “Jhun-Jhun, Before the Declaration of Martial Law [Si Jhun-Jhun, Noong Bago Ideklara ang Batas Militar]” and “This is a Dictatorship [Ito ang Diktadura]” be more dangerous than paid influencers preaching lies?

In response to the issue, Mako Micropress released an online series Tips Mula sa Kapwa DIY-fenders [Tips from Fellow DIY-fenders] with a call to decentralize, immortalize, and localize. It was a call to digitize materials, to reach out to software engineers and computer professionals for encrypted and safe avenues to store data, and to reach out to fellow artists and authors both locally and overseas.

A major difference between the 70’s and the present, after all, is how technology and information interact, and the roles that they can play. Social media may be the domain of state-funded disinformation, but open-source communities and digital rights movements offer alternatives. After all, computer scientists, hackers, programmers, and the tech sector as a whole are vital in making technology work for us, not against us.

Though archives are typically considered to be institutional repositories of documents, often vetted by a certain criteria, digital community archives can evolve and respond organically to the needs of those who maintain and support it. The ethos of open source technology, after all, can extend from its software development to the very values that shape it. Even if–and I strongly hope this would not be the case–the government may not be transparent about the political inclinations behind what it chooses to archive and display, a counter-archive can protect what they try to erase.

Another advantage of digital archives is that it can be reproduced and disseminated to anyone with the means to obtain them. Archives can exist now not just on hard drives, but also on cloud storage, Discord servers, flash drives, and more. Many of these platforms are hosted in areas outside the Philippines’ jurisdiction, and thus have another barrier of defense against being taken down. And even if one of those are quashed, many more others will take their place as these documents are copied and pasted.

Many archives about Martial Law and Philippine history have been cultivated and maintained before and after elections. To name a few, there’s the citizen-led Project Gunita, The Martial Law Chronicles Project, and myriad reports of investigations by foreign organizations and reporters. Critical writings such as The Conjugal Dictatorship of Ferdinand and Imelda Marcos (1976) by Primitivo Mijares, the Philippine Center for Investigative Journalism’s reportage, and incisive journalism about online disinformation by Nicole Curato and Jonathan Corpus Ong, among others, are still easily accessible at present.

Instead of burying the darkest parts of history, we gain strength and wisdom from facing it head-on. The efforts that took place the week after elections planted seeds of solidarity and strength in the years to come. Even if the Marcos administration attempts to repress history through disinformation, censorship, or possible internet shutdowns, with this constellation of archives maintained by individuals and collectives of varied scales, then the light of truth will not be extinguished.

Nabilah Said mentored the writer and edited this article as part of the inaugural AE x Goethe-Institut Critical Writing Micro-Residency 2021/2022. Read more about the programme and the six resident writers here. 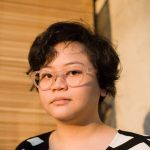 MC Reodica is a cultural worker based in Metro Manila, Philippines, whose writing revolves around sound, internet cultures, and DIY. She was awarded the Purita Kalaw-Ledesma Prize for Art Criticism at the Ateneo Art Awards in 2018. Reodica is also the guitarist of the independent rock band The Buildings.