Skip to content
In the latest installment of AWARE’s Growing Up anthology, Diana Rahim finds that in an environment where our experience of race and womanhood may be constricted, personal stories can be powerful acts of re-making and re-narrativising.

“Words have power and, by extension, so do stories. If they have the power to contain us, perhaps, we can also tell stories that liberate us”

– Ham, Horror Stories for Little Girls, from Growing Up Perempuan

In 2018 Growing Up Perempuan was released, bearing intimate, revealing, powerful stories by Malay and/or Muslim women. It meant a great deal to me and my peers at the time. It had created a space within which Malay women could speak, seek solace in each others’s stories, and chart generative and joyful ways moving forward. Never before had I read stories so close to my own lived experience, and though some were very different from my life, they were situated firmly within my own community. To be given an intimate and profound look into the lush complexity and heterogeneity of the community I belonged to; to read their voices in their full glory, pain, sadness, and joy; to find my fragments of my own reality on the page; to be able to have heartfelt discussions with friends about the topics raised in the book—it all made made me feel more situated, and solid, not only as an individual but as a woman in my racial and religious community.

So when AWARE announced What We Inherit: Growing Up Indian, I eagerly supported the kickstarter project, and knew that the landmark publication would not only be profoundly meaningful to the women in the South Asian community here, but deepen the understanding of what they experience beyond the preferred curated narratives our state’s liberal multiculturalism usually provides; stories that shy away from anything but neat narratives of model minorities, and superficially harmonious family lives. In the Growing Up anthologies, women share stories of experiencing trauma, breaking cycles of abuse, confronting gendered violence, enduring racism at the workplace, the unique ways in which mental health distress is treated in one’s racial community, and so much more.

Writing forms like memoir, personal essays, and autobiography, have always been particularly significant for women. For second wave feminists, these first-person forms of writing and personal testimony were part of the practice of consciousness-raising that merged the personal with the political. Popular in the 1970s, consciousness-raising allowed women to explore and examine their personal experiences, identity, and share support and acceptance of each other’s stories. Though the feminist movement has continued to developed a multitude of methods in its struggle for gender equality, sharing one’s personal story persists as an elementary political act that contains the power to disturb received narratives on what a woman should be, how she should behave, and what she is meant to endure and aspire towards.

The personal story is one that is powerful because it moves outside established and institutional paths, and narratives. This is perhaps even more significant in the context of Singapore where the racial categorisations of CMIO flattens the diversity of each racial category and mainstream representations and narratives of each racial community are similarly homogenous, and even stereotypical, and at times even downright offensive. In such an environment, where the representation of our experience of race and womanhood is curated, sterile, hurtful, and at times dehumanising, to share your own story (under the looming awareness that issues of race and religion falls under the state’s out-of-bounds [OB] markers!) is an act of taking ownership of our representation and stories, of intimate re-making and re-narrativising. As the editors of Growing Up Indian Shailey Hingorani and Varsha Sivaram write, “Indian women’s everyday lives–their torturous paths to self-realisation–deserve to be witnessed in their own right, and that they cannot be subsumed into one monolithic category”.

As the editors express, even the anthology being named “Growing Up Indian” is a result of Singapore’s limiting (pre-partition) category of “Indian” that subsumes a multitude of South Asian identities into its fold.

Part of what made these anthologies so special is the fact that the majority of contributors are not established writers. This is undoubtedly significant in democratising women’s voices on the page. After all, the medium of a published book is one that presents multiple barriers of entry, and is often the domain of a small class of pre-dominantly highly educated people whose expertise lie in the written word. To read stories of minority women on the page would mean reading those who have written autobiographies or whose lives were regarded as exceptional enough (according to the standards of a capitalist, neoliberal society) to be recorded by another. Prior to these anthologies, finding stories of everyday women would depend on the more democratic social media platforms, blogs, and certain artistic and media productions that attempt to capture their voice. But of course, social media is not entirely democratic and an amount of social capital and wealth still determines whose presence, and voice is more popular and uplifted by the algorithm. As for artistic and media productions, there is still the matter of who gets to consume them, and being in Singapore, the work often has to trudge through the pressures of censorship that may limit whose stories are told, and how.

The Growing Up anthologies, being explicitly feminist projects, meant that the editors understood that they were the ones who had to cross barriers in order to receive stories that truly captured the multitude of experiences of women in the South Asian and Malay community. As submissions were opened for Growing Up Indian, a free ideation workshop was conducted with acclaimed novelist Balli Kaur Jaswal. A writing workshop had also been conducted in gathering stories for Growing Up Perempuan, more specifically conducted for young women staying in a girls’ shelter, allowing for them to express their voice through a mixed-media format, and a more manageable word count.

To have more authentic, heartfelt stories enter our ecosystem enriches our understanding of what it means to be “brown” in Singapore, to understand that it is a rich, multi-layered experience that is only beginning to be properly represented. We respond so strongly to these stories precisely because we have been starved. We have had to be satisfied with so little, under the constant refrain that looking deeply, and meaningfully into the difficulties, injustices, and complexities in our experiences as minorities threaten a carefully maintained “racial harmony”. Yet this idealised vision of racial harmony has prevented us from truly understanding the full richness, not only of each other, but even of our own community.

The 38 stories sprawled in Growing Up Indian share the deep complexity of the South Asian woman’s (and some men’s!) experience in Singapore, one intimately informed by histories of colonial, and post-colonial periods of migration, the politics of caste and gender, the still-present effects of partition, and so much more. While both anthologies share certain similar themes such as stories that recount experiences of intergenerational trauma, grappling with tradition, gendered abuse, and racism in the workplace, it was the differences that made me appreciate the value of these texts so much more. For example, Growing Up Indian featured multiple stories of women who mourned being alienated from their own mother tongue and how this cut them off from a part of their culture, in part due to the lack of classes provided in schools for other South Asian languages apart from Tamil. A situation further compounded by parents who may feel compelled, or face certain pressures, to place their children in Malay or Chinese language classes instead of in Tamil classes. The anthology, featuring voices of women as 1st or 2nd generation Singaporeans, also speak to the fact that migration is a major component of the South Asian experience here, and enduring bigotry and xenophobia from fellow Singaporeans is very much a real and urgent problem. Sociologist Laavanya Kathiravelu’s contribution to the anthology “Brown is Redacted” details this in relation to the increase in hate-crimes experienced by South Asians during the pandemic, and how the racialised immigration regime has disturbed Singapore’s idealised definition of a multi-racial nation.

Growing Up Perempuan in comparison featured more stories that spoke of class struggle with women recounting their experiences with poverty, dysfunctional domestic lives, as well as the issue of Islamophobia and one’s own experience, contentions and journey with Islam. This is unsurprising considering the fact that the Malay community is pre-dominantly Muslim, and over-represented in the low-income community and the attendant struggles exacerbated by poverty. The Malay community does not deal with the problem of xenophobia, but instead with the lasting impact of post 9-11 Islamophobia, the colonial “lazy native” stereotype and the interaction between racism and class.

While the state’s racial politics conditions us to think that unity means a shedding away of our complexities in order to bond over our national identity, what the stories in these anthologies have shown me is that understanding our very complexities, differences, histories and the array of struggles we endure, in fact deepens our bonds with each other. In addressing the double bind of racism and sexism, it would do no good to assume that the experience of being “brown” is homogenous, and that minority womanhood is the same for everyone.

Nearly 30 years ago, in her seminal work Feminist Theory: From Margin to Center (1984), bell hooks had decried falling into a romanticised and mistaken belief in a homogenous “sisterhood”. Though women may all be subjugated under the patriarchy, and the scrutiny and even violence of the state, our experiences cannot be presumed to be similar. The impulse to homogenise the experiences of women poses a problem for feminist coalition building, which is necessary in order to sharpen the fight for gender equality. Needless to say, this consideration is vital to understanding the experiences of women in Singapore too. Our personal histories, race, sexuality, and other significant aspects of our identity will undoubtedly shape our experience of womanhood. We can only be in communion if we understand that there is power in our shared struggles, but also in deeply understanding our differences that allow us to truly understand each other beyond received narratives. In those differences, are opportunities to express true solidarity, one that is not conditional to whether we share the same race, religion, or life experience. We uplift the voice and experiences of other women, not because we share the same experiences but because we understand, as Audre Lorde had written: “I am not free while any woman is unfree, even when her shackles are very different from my own”.

Although our stories and struggles are not the same, our goal for a more just, joyful, liberating future for women, is.

What We Inherit: Growing Up Indian is published by AWARE and can be purchased here.

Editor’s Note: This version of the article in an updated, edited version, which was uploaded on 1 Nov 2022. 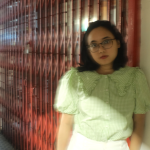 Diana Rahim is an editor, writer and sometimes visual artist whose work currently explores the politics of public space and the experience of the environment. She dreams of autonomy, and kinder, more generative decentralised futures.