We recently announced our selected resident writers for the inaugural AE x Goethe-Institut Critical Writing Micro-Residency, focusing on the development and promotion of critical writing about arts and culture in Southeast Asia. They are: Nhuan Dong from Saigon; Dwiki Aprinaldi from Yogyakarta; Eddie Wong from Petaling Jaya; Wilda Yanti Salam from Makassar; Mariah Reodica from Las Piñas; and Rebecca G from Singapore.

Through this residency which runs from May 2021 to May 2022, we hope to support the work of independent writers in the region, especially those who are passionate about arts and culture and yet lack the resources and opportunity to nurture that passion.

In the second of this two-part series, we speak to Wilda, Mariah and Rebecca, who will embark on their two-month digital residencies later this year and early next year, where they will produce an article in their own areas of interest. (Read Part 1 here)

[The interviews have been lightly edited and condensed.] 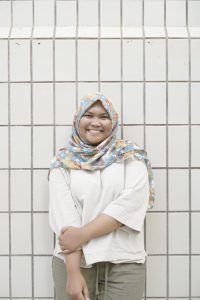 I am a young writer and researcher based in Makassar, Indonesia. I enjoy cycling down the alleys in the urban villages in my city and writing about the daily practices of ordinary citizens. In 2020, I started Memodapur, an initiative to document daily life from the entrypoint of the kitchen. Since 2018, I have worked in Tanahindie Urban Research Institution, a non-profit organisation founded in 1999.  Since early 2019, I have written for and managed Artefact.id, an art archiving circuit in the Eastern Indonesia region. I am part of the management team and publication manager for Makassar Biennale Foundation.

My interest in art was triggered by my involvement in the 2019 Makassar Biennale (MB), which at that time was managed by Tanahindie. Part of the agenda for the MB was the ‘Citizen Festival’ held in Tanroe Hamlet, Pinrang Regency in South Sulawesi. The residents made various works from shells, sand, dried trunks and branches, which were exhibited in the yards and the houses of the residents of the community. The local people also taught us how to cook shellfish and choose fresh sea fish.

From that experience I realised that art is a method. It can be our gateway to learn from each other. Art is not something that is separate from our daily lives, it can also be a way to solve the problems of ordinary citizens.

It is not widely known, even by people in South Sulawesi, that the oldest figurative art showing modern human civilisation is at the Leang-leang Site in Pangkep Regency, South Sulawesi. This art indicates an advanced artistic culture that has existed since 44,000 years ago, which refutes a common view that the first human cave art consisted of simple geometric symbols that evolved into beautiful figurative paintings of animals from France and Spain. Unfortunately, according to researchers, this trail is fading each year as permits are granted to cement factories which expel dust which further accelerates the fading of the images.

4) How would you describe the arts media/arts criticism landscape in your city/country?

For Makassar, the art scene continues to grow, but few people have the interest to focus on art writing. Many art activities, works of art, information and knowledge just evaporate, because publishing and archiving have not been considered as something important and needed.

Makassar and Eastern Indonesia are not located in the city centre, unlike the West Indonesia Region (Jakarta) with many mainstream media outlets around them. So we have to work on our own publishing so that the art events we are working on can be known.

I am interested in writing about the MB,  which has a format and concept that is different from other biennales in Indonesia. For example, each MB location/city has a different format, programme and work team. MB 2021 had the theme of “Maritime: Sekapur Sirih”, in response to the COVID-19 pandemic. “Sekapur Sirih” (a term for the habit of chewing betel nut) is a general term of hospitality towards guests and is part of the traditional culture in the Nusantara.

Amongst other things, I’m interested in writing about the activities of each city and how local communities have been engaged. Additionally, I want to explore how the MB can give a new colour to the contemporary art scene in Indonesia and Southeast Asia today. 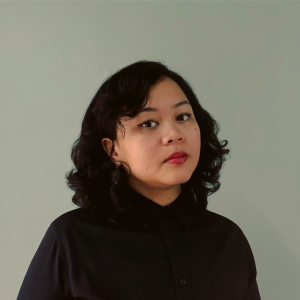 I’m Mariah Reodica, musician, writer, and artist based in Metro Manila. My writing career started in music journalism, and I wear that on my sleeve. Over the past year, I’ve been maintaining my column in the Philippine Star and focusing on the upcoming album of my band, The Buildings, which we’re launching on the Minecraft venue Club Matryoshka in June.

I grew up surrounded by music and cooking. I’ve been playing guitar for roughly 14 years now. This sensitivity to attunement and gestures informs how I approach contemporary art. The kind of art practice I aim to live is one where art and everyday life are intertwined, not separated. When I wash the dishes, water plants, or do errands, I do it as an artist. I also grew up watching a lot of movies and playing video games, which sparked my interest in how narratives are formed and executed.

There’s plenty of writing about art that circulates within the market, but there’s a lot more happening outside of that bubble–and that’s where most of what interests me is.

4) What’s the most challenging thing for you as an arts writer?

Delving into gaps in archives. A lot of important stories are only passed down anecdotally. I get it, artmaking alone is already demanding. It’s one thing to produce art and often in the thick of producing it, documentation becomes an afterthought.

Also, being constantly reflexive about how to stay grounded in ethics, and what writing can and can’t do.

5) How would you describe the arts media/arts criticism landscape in your city/country?

There are a lot of untold stories and movements happening – and a lot that have passed – that haven’t been documented. Part of my practice involves media archiving, which is a race against entropy not just of material degradation and technological obsolescence, but also memory. A crucial part of imaginative writing, I believe, is also being informed by history and weaving a narrative that is true to the present, and reimagines the future.

I’m looking forward to diving further into internet art in the Philippines and perhaps Southeast Asia, given that communities in this region face issues in terms of censorship, internet shutdowns, privacy violations, and profit-driven decisions, among other problems. The experience of the internet in the Philippines alone is characterised by throttled bandwidths, even if we’re among the top users of social media globally, and the internet has enabled a whole industry of call centres supplying English speakers to the West.

Not to mention that the infamous ILOVEYOU computer virus was authored by a Filipino who wanted to nab internet access passwords.

There are specificities about the internet in the global south that artists have explored in terms of themes, technology, and design. Yet since the internet has so much information as well, it’s a challenge to sift through the noise. Perhaps that’s my entrypoint as a writer. 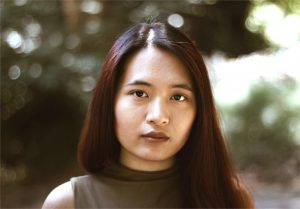 I am a pint-sized human with loads of spirit(s) – puns intended! That example of my comedic limitations aside… I am a queer interdisciplinary theatre/movement director, collaborator, writer, dramaturg, and researcher. I currently helm from (a)basement theatre collective as the company’s Artistic Director, and I am a Drama and Philosophy graduate from Royal Holloway, University of London. I have previously directed and trained with creatives and organisations all around the world — including international commissions (both in-person and digital) from the Czech Republic, Poland, Germany, Singapore, and the UK.

My practice is based on processes of extraction, excavation, and empowerment. In that vein, my work is inclined towards exploring dialectical themes of subversion through site-responsive physicality, intercultural storytelling, and documentary/multimedia performance. I am also extremely passionate about supporting fellow creatives in all of their diversity, and creating interactive spaces for social change.

I’ve always had an interest in creative self-expression, and developing empathy through the arts, from a young age. My mother has a cupboard with an entire door dedicated to displaying my handwritten letters and artwork as a child; some of them illustrating, in great detail, how I’d abscond from home and live as a hermit (as you do). I guess I’d always associated creativity with liberation. My involvement in theatre did mitigate the severity of my stammer as a teenager too, so it’s definitely helped me to find my voice, and my vocation — which is an experience I am always aiming to facilitate for others.

Although local governmental censorship is indeed a massive barrier to access (for both audiences and artists alike), there is a tangible undercurrent of communal resistance that’s waiting to be discovered. There’s definitely a lot more than meets the eye here.

4) What’s the most challenging thing for you as an arts writer?

To be objective, and to put aside my biases as someone who is active in the industry. I try to relate, and connect, to everything I see and hear in a constructive way — and it’s an ongoing process. How objective can arts critique be, and should we be having that conversation at all?

5) How would you describe the arts media/arts criticism landscape in your city/country?

It’s a small world, and often neglected as a whole. I have seen criticism / reviews that do not lift artists and their work up in any way, and feature ‘star’ ratings that are at odds with whatever they’ve said. Reviewers and critics aren’t held to account frequently, despite being as much a part of the ecosystem as the subjects of their writing are.

I am looking forward to attempting a (re)definition of the relational dialogism between artist, audience, and critic. Can the act of critiquing be a creative process in itself (the aesthetics of critique)? I aim to investigate methods of encouraging independent self-perpetuating dialogue between the writer, reader, and object of analysis, through my article. This will all be tentatively contextualised as a study of the role/question of the ‘fringe’ within Singapore’s performing arts scene, in comparison to its counterparts across Southeast Asia. How should we describe Singapore’s fringe culture, if it exists at all?

The inaugural AE x Goethe-Institut Critical Writing Micro-Residency 2021/2022 is organised by ArtsEquator and Goethe-Institut Singapore. Follow the journey of the writers here.