A new addition to the genre of online theatre, Oppy & Professor Communitas by Five Arts Centre is a thoughtful, humorous, and self-reflective examination of the role and struggle of Malaysian theatremakers. Anchored through a series of workshop lectures, the play centres on Oppy, a young actor and musician who is at a crossroads about his own artistic practice, and his workshop facilitator, an unflinchingly candid and experienced theatremaker who is referred to only as “Prof”. The play, hosted on CloudTheatre, successfully uses the digital “Zoom theatre” medium, with director Fasyali Fadzly’s choices rendering moments in Leow Puay Tin’s text colourful, humorous, surreal, and deeply introspective. The play effectively offers us an opportunity to reflect on the role of theatre-making in Malaysia and the challenges faced by theatremakers, but also left me yearning for more connection and depth with the characters.

At the core of the play are Prof and Oppy who, though different, have both found a sense of belonging, understanding, and community in theatre. Played by Faiq Syazwan Kuhiri, Prof is an eccentric character prone to long-winded digressions, and is disparaging of the Malaysian theatre scene’s aversion to theory and debate. Like many of the characters in the play, he is familiar. You’ve probably taken an arts workshop with someone like him: whose long experience in the arts has made them both strangely unhinged and incredibly wise at the same time.

While his name-dropping of terms like “dialogics” and “choreomusicology” sometimes went over my head, it is his stories that prevent the text from becoming overly academic and esoteric. His most memorable stories are those from his personal life, showing us how the lens of theory can allow us to better appreciate the complicated country we live in. For example, when he discusses his roommates—a community of transgender people and drag queens in Malaysia—Prof’s understanding of theatre theory gives us a new way to appreciate the community. He describes how they used their own language and symbols to create a sense of community, and how he became an audience member of their communitas. These everyday moments become something deeper, something more profound when one is able to makan teori.

It’s Oppy—another relatable character from the Malaysian theatre scene—who absorbs and reflects on Prof’s words. Oppy, played by Iefiz Alaudin, is reminiscent of many young theatremakers: a young actor and musician who is uncertain about the future and somewhat disillusioned about the possibility of a financially stable future in the arts. He’s working on his own play, The Act of Violence, in which a young Malay man named Johnny struggles to fit his identity into the boxes that Malaysia has imposed on him.

For most of the play, Oppy is unnerved by Prof—whose words perhaps go over his head, and whose confrontational approach makes him uncomfortable. Yet, it’s when Oppy is able to see the lens of theory in his own life that we understand why this encounter is meaningful. In one scene, for example, Prof describes the search for agency as a central struggle in theatre. Agency, Prof says, is how you can live your life meaningfully within restrictions, and he connects it to the stories of Oedipus and Hamlet. It’s here that Oppy begins to link the idea of agency with The Act of Violence, and how a confused young man might find meaning and agency despite the restrictions of the Malay identity.

The real heart of Oppy’s character emerges in song. His journey is bookmarked by musical interludes written by Faiq Syazwan himself. There’s something vulnerable about these songs: a grown man’s treble voice on the ukulele singing about not having enough money or no longer hiding. The songs serve as a softening, especially after Prof’s often sharper monologues, as well as points of realisation for Oppy.

The digital medium of Oppy & Professor Communitas is one of its biggest wins. It’s strikingly lo-fi, with its actors performing in front of their laptops, as their backgrounds change to denote a shift in setting. The live performances are interspersed with shots of actor Iefiz Alaudin doing movement and dance work in front of a changing green screen. At times, special effects reminiscent of the early-90s are used: clip-art graphics with PowerPoint-like transitions for example, or Oppy’s body floating through the screen during a musical interlude. In its simplicity, the play seems to embrace and pay homage to the shoestring budgets that Malaysian theatremakers often must work with.

During intermission, audiences are also made privy to a shot of the “stage”—the upstairs room of Five Arts Centre—as the actors and crew take their own break. It’s a bit meta to watch theatremakers taking a break from playing theatremakers, but it gives audiences a bit of insight to the community required to create a play. That is to say, we are exposed to a bit of communitas in the act of making theatre.

Yet, this communitas feels absent from the workshop, and from Prof and Oppy’s relationship to one another. For most of the play, Prof is talking to Oppy, while Oppy retreats into his reflections. I wonder if there could be stronger choices made in the script or direction that could bring these two men closer together. After all, there is so much potential for connection: both of these men have felt critical of their society, and have found a home in theatre. But the sense of collective joy and of shared communal meaning remains a largely abstract theory in the play.

It’s striking also, that this encounter is largely male and Malay. In an interview, Puay Tin describes the process of writing such as play as a way for her to understand an “other…crossing many boundaries to get close to [the characters]”. Yet, the end-product left me feeling that the characters only scratch the surface of engaging with their race and gender. We do see attempts to do this—from Prof’s stories of his transgender roommates, to Oppy’s struggle with his racial identity, and Prof’s statements that “the body is multicultural.” However, we never get to a point where the characters must really face themselves and address the complicated questions of race and gender in the intersections of economic value, privilege, art-making, and belonging. The play skims stones on the lake, but doesn’t really get deep underneath the water.

At the end of the play, though, we are given a call to action. Prof ends his workshop by saying, “if you cannot deliver, that’s okay. Just enjoy yourself”. This opens into the final song of the play, an endearing and meaningful ode to need to continue to express oneself. “Jangan bersembunyi,” Oppy sings to himself. “Hidup hanya satu. Mati hanya sekali. Luahkan diri, kaum lelaki.” (“Don’t hide / We live only once / We die only once / Express yourself, men.”)

Perhaps this is what we are supposed to leave Oppy & Professor Communitas feeling: the urge to continue to make and create. Beyond theory and financial instability, there is perhaps the greater point of art, and that is the pleasure of making it, and making it with others.

Oppy & Professor Communitas was presented on 2-3 April 2021 on CloudTheatre. 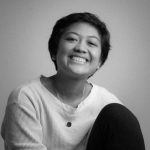 Lily Jamaludin works at the intersection of activism and writing, having worked with several social change NGOs in Malaysia. As a writer, Lily won the Mercedes-Benz Creative Excellence award in 2017 for her short play in Short+Sweet, and was featured as an Emerging Writer in the 2018 George Town Literary Festival. Her works can be found in anthologies by Haymarket Press, Fixi, and Gerakbudaya.