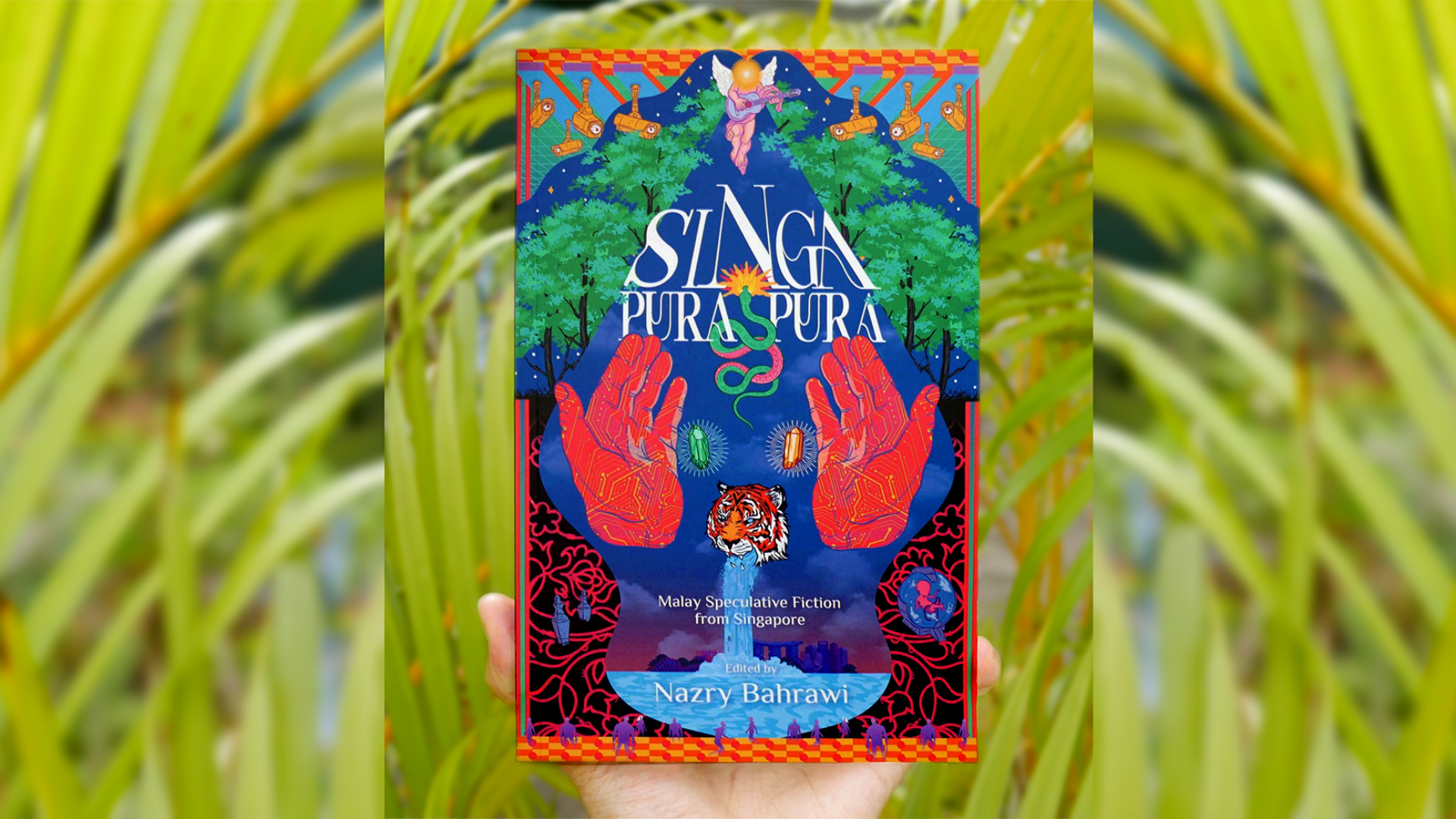 Singa-Pura-Pura boasts an eclectic collection of short speculative fiction from a minority ethnic group in Singapore, exploring worlds where robots are therapists, prayers are read from preloaded cards, and humans are migrating to Mars. Edited by Nazry Bahrawi, the stories consider various spiritual, social, and economic themes, with many leaving me with questions about where we are heading as a society. As a Malay reader from Malaysia, however, I was surprised at how few of the stories addressed racial inequality.

To me, speculative fiction should serve as a mirror, reflecting or revising our world in a fantasy world, so that we may better understand ourselves. Where are we going? What are our blind spots as a society? What new ways might we re-envision the future, or reorganise our society? The stories that stand out to me in Singa-Pura-Pura are the ones that make strong choices in re-imagining concepts or challenging a future that we are headed towards.

bani haykal’s “Isolated Future #2: MacRitchie Treetops” explores how new forms of technology might be repurposed to serve communities and resist capitalism. Written as stream-of-consciousness fieldnotes, a researcher interviews an artistic commune that has developed a way of transmitting encrypted messages through scent. We learn how the complex system becomes used to resist gentrification, as well as to coexist with animal counterparts. “We secretly sent word out that we could house those [residents] who were denied their homes,” the artist explains, “[And] if there are threats the insects can’t defend themselves against, like construction sites that destroy their homes, we can activate ourselves and our networks to prevent that from happening.” The strength of this story lay in its empowering of artists as agentic and revolutionary actors, rather than articulating a new government or economy.

Other stories painted a utopian future dominated by technology, and the people and cultures that would be left behind in that future. In the world of “Doa.com” by Hassan Hasaa’Ree Ali, automated machines read prayers through preloaded cards, and young people have forgotten how to memorise prayers. A young man visits the graves of his parents, and amidst his muted grief, he meets a robot janitor who helps him read the prayer to his parents. Such simplicity of plot works for the story, resulting in a charming read that affirms the need for the power of human connection and presence in ritual. Farihan Bahron’s “Gold, Paper, and Bare Bones” also follows a simple plot that questions capitalistic work culture. Here, an aging blue-collar worker spends his whole life collecting points so that he may pass the threshold to retire. However he is killed at his workplace, a mere 50 points away from retirement. It’s not far off from the world we live in, but having been accentuated, we can see the irony better.

Gender and queerness in speculation

I also significantly enjoyed the stories that looked at questions of gender through a speculative lens. “Beginning” a revision and queering of the Muslim origin story by nor, is one of my favourites of the collection. A nonbinary God produces a cosmic snake and another turtle-like creature, who are eventually destroyed and unable to reunite with God. This inability to reconnect with the cosmos eventually produces humans in gender binaries. These gendered human beings are left with an eternal sadness—but one that will eventually lead them home. I read “Beginning” as a story that explores queerness through several Islamic concepts: tawhid (oneness and unity of God) and huzn (an inherent sorrow that human beings might feel as creations separated from the oneness of God). It is both a brave and intuitive choice to explore queerness through religious concepts, and I hope to see more speculative fiction that does so.

In “Mother Techno”, a woman nearing her thirties uses artificial intelligence to cope with the death of her mother, and make decisions about having children. It’s a poignant piece by ila that hits close to home, looking at the traumas and transitions of adulthood, the pressures placed on women entering their thirties, and how technology may or may not help us cope with them in the future.

Nuraliah Norasid’s “Prayers From A Guitar” uses subtle magical realism to explore the power of music, art, and curiosity in chipping away at the hard walls of patriarchal ideology. Hazrali, a conservative Ustaz, seems upset to find a guitar hidden in the back of his wife’s closet. As he picks it up, he is transported to the moment when he first met her, and finds himself attempting to play the guitar. “They stared at him— his daughters with curious grins and wonderment; his son with confusion; and his wife, her mismatched pale and obsidian eyes, taking in first the guitar and then his face that now bore the excited expression of a child with a new discovery,” writes Nuraliah. It’s an interesting choice for this story to focus on the interiority of a problematic man, and attempt to veer away from simplistic tropes about Malay men. However, I was left unsure if Hazrali’s shift at the end was a meaningful transformation or a brief diversion. Which emerges victorious, patriarchal ideology or music?

Room to push the anthology

Other stories in Singa-Pura-Pura carried strong plots, but seemed to squander the opportunity to meaningfully explore the questions they contained. “(A)nak (I)bu” by Tuty Alawiyah Isnin, for example, follows a young man’s first appointment with a robot therapist. However, the plot seems to distract from the larger thematic questions about the role of artificial intelligence and mental health provision, which remain unasked in the piece, and instead it focuses on a kidnapping involving the man’s mother. Perhaps not all readers are as invested in the social themes of speculative fiction, but I still feel this is a central part of the genre.

There were several stories that were difficult to follow, and choices made about the fictional world that felt unclear. In Noridah Kamari’s “Second Shadow,” the story follows an activist-academic whose shadow is spying on him on behalf of the state. But, with the character written to be paranoid in general, with a penchant for conspiracy theories, the Illuminati, and the new world order, I struggled to understand who we were supposed to mistrust. Was it the character or the state? Editor Nazry Bahrawi’s “Tujuh”, a story about a detective that takes a dark twist, seemed to be overly reliant on shock value, and was missing a critical content warning on violence, descriptions of death, and sexual violence.

With Singa-Pura-Pura being a collection about the minority Malay community in Singapore, I had expected more critique and commentary on contemporary racial politics, and the institutions that prop up inequality. It’s hinted a bit in “Tujuh”, with the main character alluding to the “lazy Malay” colonial stereotype: “He blames his Malay genes. Government data indicates that his kind are not predisposed to the serious pursuit of science and math, preferring instead to dwell on ‘activities’ like music and philosophy.” For the most part, comments on racial inequality are absent in the collection. Perhaps this is due to Singaporean publishing laws that I’m not familiar with. Or maybe these are tired-out questions in the Singaporean Malay scene. It could be that speculative fiction like Singa-Pura-Pura allows these writers to create a world where they don’t have to deal with exhausting racial politics, and can imagine new futures that break out from racial issues. Still, to be Malay is a loaded identity (both in Malaysia and Singapore) and I did wish they had engaged with this more. As an outsider, I’m left wondering what it feels like to be Malay in Singapore.

Singa-Pura-Pura is a promising anthology that holds potential for the future of speculative fiction in the region. It asks critical questions about our society, creating new blueprints, re-creating our origin mythologies, and imagining the varieties of Malay life in the future. As a Malaysian venturing into Singaporean literature, these writers have opened a window for me into what our mythologies and futures could look like. I’m keen to read more of their work, and to continue re-imagining the region together.

Singa-Pura-Pura, edited by Nazry Bahrawi, is published by Ethos Books. It is available for order here – with perks if you order from now till 3 September 2021.

The above review is based on the e-book version of Singa-Pura-Pura.

Lily Jamaludin is a writer, poet, and human rights campaigner based in Malaysia. Her work can be found in South China Morning Post, QueerLapis, and in anthologies published by Haymarket Press, Buku Fixi, and GerakBudaya. In 2017 she was featured as an emerging writer at George Town Literary Festival. She recently completed the CENDANA-ASWARA Arts Writing Masterclass and Mentorship Programme.