Walk around Kampong Gelam today and it’s easy to forget how much of a rich historical site it used to be. Historical markers abound, and yet, grab any young person hanging out in its many hip dining establishments and they might not know, for example, why Kampong Gelam is so named.

The video “Looking for Mr Gelam” aptly builds a light mystery around the name, with an uncle and niece pair traipsing around Kampong Gelam to learn the identity of the personified “Mr Gelam”. Indeed, in our modern times, a word like “gelam” sounds asynchronous. In fact, it’s often approximated to the English word “glam” – conjuring a more trendy identity.

The cajeput or gelam tree is native to Singapore. There is a reason why it’s so revered – it can be used to make boats, for carving and firewood, and it even produces a medicinal oil that can help with aches and rheumatism (hence, the Tiger Balm). Today, we can find a handful of these trees in the vicinity of the Malay Heritage Centre – a quiet star in the middle of the bustle of the lively area.

The 6-minute video was created by Chris Mooney-Singh of literary non-profit Word Forward as part of Aliwal Tracks, an online programme of performances, music as well as street art organised by the Aliwal Arts Centre that’s designed to highlight the stories, sights and sounds of Kampong Gelam. In the 10 years that the Australian-born writer has been based in Aliwal Arts Centre, he’s formed a close relationship with the precinct and its residents, and wanted to share that fascination.

Says Chris: “I wanted to also suggest that heritage is vital to understanding where Singapore began and that we should also be mindful of preserving the environment, not just in name only. Should we only have street names pointing to history?” 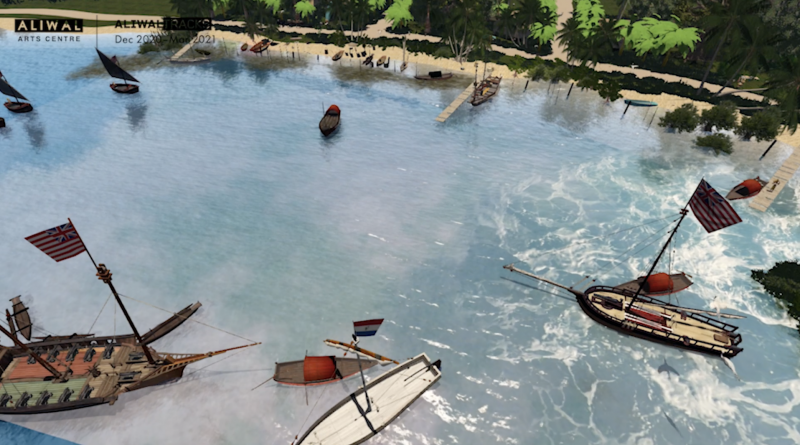 A depiction of what the beachfront in Kampong Gelam might have looked like in the early 19th century.

In the video, the uncle gives his niece a glimpse of olden day Kampong Gelam. Standing in front of PARKROYAL hotel along Beach Road, she instead sees a depiction of the olden beachfront, a myriad of ships in the bay carrying goods and people.

In creating this video, Chris worked with digital modellers to build a virtual filmset to recreate an idea of the original Kampong Gelam. While he does take some artistic liberties – there are majestic elephants holding fort outside of the Malay palace, for example –  he did refer to historical writings, period maps, original sketches, as well as photographs to get a better idea of how the area might have looked like in the olden days.

“I relied on scholarly research that shows how the first masjids followed (an) original Malay design that reflects the influence of Buddhism’s tiered roofs and Hinduism’s square precincts. History, like religion, is layered and interconnected,” shares Chris.

Beyond just seeing it as a virtual set for a film, Chris hopes to expand the virtual world that he’s building, adding more details to do the historic area justice. Titled “Virtual World, 1825”, it takes its cues from single-player role-playing games, and allows one to create avatars and explore Kampong Gelam on foot while exploring its architecture and local residents (in fact, you can also fly and end up underwater!). Chris hopes to eventually make it available to the public.

He says: “The vast majority of young people play computer games. Why not use the same tech for cultural preservation and virtual education as well as present a new vehicle for virtual tourism?” 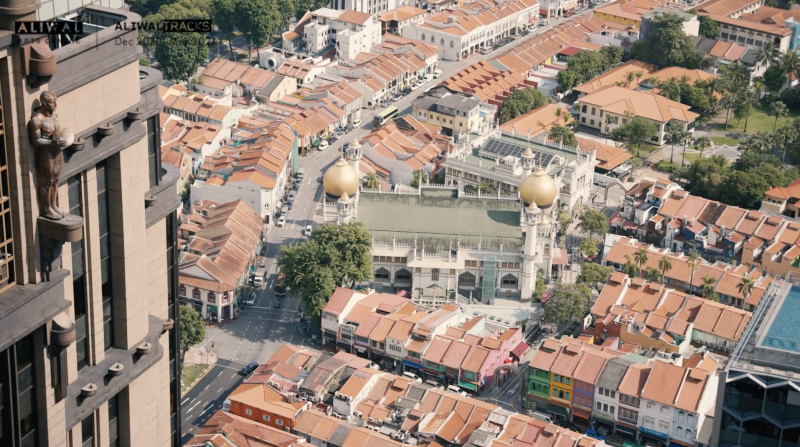 The view of Kampong Gelam from Andaz Singapore.

Indeed, “Looking for Mr Gelam” features appealing scenes of new hotel Andaz Singapore (in particular, the spectacular views off its rooftop bar), and the colourful murals and charming alleyways of Kampong Gelam, which reminds one of the overlaps between destination tourism, placemaking, worldbuilding and storytelling.

Mr Saeid Labbafi, who has owned several businesses in Kampong Gelam for the past two decades including handicraft retailer Sufi Trading on Arab Street, applauds efforts like Aliwal Tracks that help educate more people about its heritage. He notes especially that as more tourists and young people rely on YouTube or Google for information, virtual efforts like these help give them a better sense and feel of a place.

“I very much welcome such efforts. I hope that this project will come under the umbrella of more partners and government bodies, so we can get global attention. This will help put Kampong Gelam more on the map”, says Mr Saeid, who is also the chairman of One Kampong Gelam.

Chris Mooney-Singh demonstrates the potential of the virtual world to Mr Javad Esbati from Sufi Trading.

COVID-19 has impacted both artists like Chris and business owners like Mr Saeid, but for now, both are heartened by the support from the local community. Mr Saeid credits loyal clients in helping to keep businesses like his afloat in Kampong Gelam. He adds: “I hope they will continue to support us, even after COVID-19 ends.”

For Chris, the pandemic has allowed more people to realise the possibility of online learning platforms. He hopes his “little film” will open more minds to the potential of technology and how we can harness it “to honour our heritage, preserve it and share it freely.”

Uncle: “It all starts with the Gelam tree.”