Snow Whitening Revisited presents an allegory on being a female artist in Cambodia, playing with imagery that evokes visceral feelings of clinging, and a sense of embodied helplessness that pays tribute to both cultural heritage and a deep historical trauma. Presented digitally as part of this year’s M1 Singapore Fringe Festival, the piece masterfully explores the festival theme of “Quiet Riot” in its depiction of the artists’ real-world struggles against misogyny and in redefining their artistry in the climate of a pandemic. Even through a screen, the New Cambodian Artists succeed in drawing from our innate senses to tell a story through movement that is less inferred, and intuitively understood.

The 40-minute piece is unhurried, as the dancers Khun Sreynuch and Ny Lai bring to life two characters: an Apsara, a popular depiction of a dancing female goddess in Khmer culture, and her metaphorical parallel, Snow White, from the Western Grimms’ fairy tale. They both begin in similar dressing, which increasingly becomes more elaborate and distinct. The common theme of being idealised versions of women breathes through these two characters of drastically different backgrounds and the spectrum of movement styles in the show, which range from traditional Khmer movement to an intricate contemporary flow. They arrive at a common point of struggle within the confines of femininity and the expectations and demands from society, uniting them across international borders.

Their relationship is told through contact, as the Apsara is born in jerky, unorthodox angles, creating a visceral sense of distortion. Closer and closer and even closer to her partner, she struggles to be embraced. Yet, she is taken away by the world, and forced to leave her safe space. She crawls and drags till finally, she drops. Invisible voices come from nowhere, a divine calling. She moves to the rhythm of these voices, till she breaks once more. She leaps up at the sound of toy-like music – prancing and taking off her clothes as her partner joins her. This is the sound of freedom! Free from the constraints of our bondage! True naked selves!

The ripping off of clothing is elaborate – an act of rebellion against Cambodia’s proposed bill for a modesty law, which is calling for the banning short skirts and see-through shirts as a solution to preserving tradition.

The performers don short red dresses, looking at each other. Like a newborn to a mother, the Apsara springs into the other’s arms, only to be immediately dropped to the ground. The sound is empty apart from the repetitive thud of her hitting the floor, over and over again. As much as we want to, we cannot cling to where we once felt safe. There is a time when we need to grow up. The sooner we learn that, the sooner we realise how alone we actually are in this world.

Here we have two female contemporary artists walking on the bloodstained path of those before them, women killed during the Khmer Rouge regime, a dictatorship that ruled over Cambodia from 1975 to 1979, and led to the Cambodian Genocide, with a reported 2 million deaths. Through Lai and Sreynuch’s movements, you can hear the tearful mourning against the injustice, and the fierce determination to carry on the will of their predecessors. Artistry isn’t just expressing, it is a blessing bestowed on the dancers to honour the past.

Snow White presents herself in a white gown in a scene reminiscent of the Evil Queen staring into the magic mirror on the wall. A see-saw effect is created as the Apsara holds her from behind by the sash. Snow White follows the path of her puppeteer, painting the floor in white powder. When the Apsara leaves, after helping Snow White with her makeup, she follows the same path of white. Snow White then blows the snow in different directions, which finally lands on the pictures on the ground of the female artists killed in the S-21 (Security Prison 21) during the Khmer Rouge regime. We end on this sad reminder of senseless loss. Yet, the snow falls evenly, across all parts of history. As Snow White, having rid of her wedding dress, holds the Apsara’s hand, the piece seems to suggest that tradition can sometimes take hold of us, perhaps at the cost of freedom.

Watching the pre-recorded performance online gave the show a sense of irony, as the absence of energy of a live audience made it seem as though the artists were screaming into the void. Still, the visceral choices that brought vastly different cultures and movement styles together succeeded in evoking the deepest feelings of both feminine strength and helplessness, presenting us with a performance that questions the relevance of traditions and our relationship to them. Perhaps one day we will be able to walk past these traditions, and no longer be weighted by the white snow.

Snow Whitening Revisited by New Cambodian Artists was presented as part of M1 Singapore Fringe Festival 2021. It ran from 25-31 Jan 2021 on VOD. 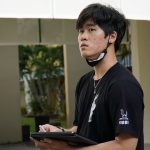 Brian Toh is a Dance Filmmaker based in Singapore, currently pursuing an MA in Screendance at London Contemporary Dance School. Previously running 5678.sg and a regular member of RPProductions, his work is centered around being able to breach the liminal spaces of artists. He hopes that through his work, that one day we will be able to embody our art beyond our stages.