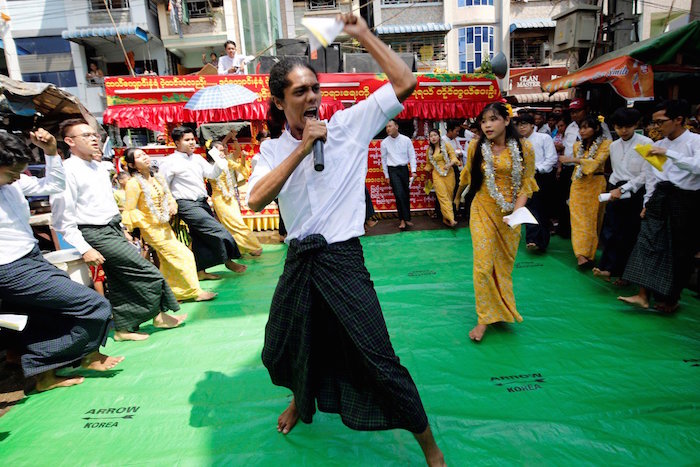 In a classroom on the outskirts of Myanmar’s biggest city, a thin, bespectacled university student led about a dozen peers in boisterous chants of “Censorship is a shame!” and “We don’t believe in censorship!”

It was the final rehearsal of a troupe performing “thangyat”, a centuries-old custom allowing free rein to satirise rulers and society during New Year celebrations that began on Saturday.

The tradition, featuring a mix of comedy and slam poetry set to drums, has sparked controversy this year, with troupes in Yangon, the commercial capital, saying the first democratic government in 50 years forced them to submit lyrics to a censor panel. [Read more…] 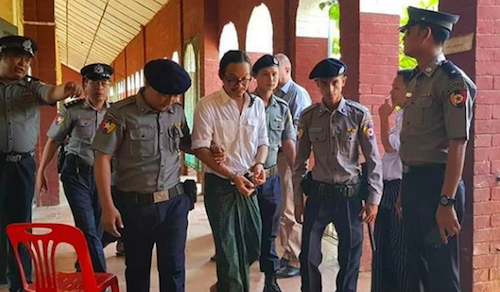 Filmmaker Accused of Insulting Army Is Denied Bail, Sent to Prison
The Irrawady

YANGON—Prominent filmmaker and human rights activist Min Htin Ko Ko Gyi, who was sued by a military officer for insulting and defaming the Army, was denied bail and sent to Insein Prison on Friday morning.

His lawyer U Robert San Aung told The Irrawaddy that U Min Htin Ko Ko Gyi had requested bail for health reasons. The filmmaker had part of his liver removed just three months ago to treat liver cancer.

The judge rejected the request, however, and U Min Htin Ko Ko Gyi was sent directly to Insein Prison from Insein Township Court.

Min Htin Ko Ko Gyi, who founded the Human Rights, Human Dignity International Film Festival, has been a strong critic of the Myanmar military. He posted series of Facebook posts criticizing the undemocratic military-drafted 2008 Constitution and the political role that it grants to the Army. [Read more…]

Round posters each 58 centimeters in diameter are hung on the legendary Kerkweg Bridge in Yogyakarta. Passers-by who stop at the traffic lights under the bridge can see many posters urging people to vote wisely in the election on April 17.

There are 22 poster designs, one of them showing a person with a smartphone covering their eyes, implying that smartphones are the biggest culprits in the spread of fake news. Written on that poster is “Differences in religion, ethnicity and race are not a reason to hate each other”, to remind people to think carefully about information on religious, ethnic and racial issues.

The 22 posters are the work of artists from the Taring Padi community, who organized a project named “Terompet Rakyat” (the people’s trumpet). Taring Padi has been known for its “ideology” of art for people since 1999. This community regularly runs “Terompet Rakyat” projects to respond to general elections. [Read more…] 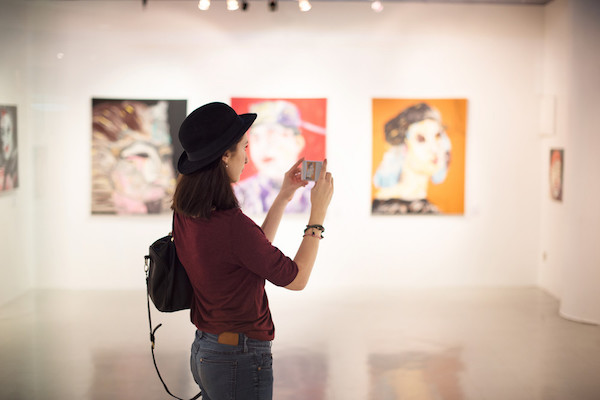 Art Moments Jakarta founder and curator Leo Silitonga said the exhibition was expected to create a new destination for the international art fair circuit that would offer networking opportunities for local galleries, artists and collectors.

“The art scene in Indonesia is expanding rapidly, and has been receiving growing interest globally. Art Moments Jakarta has been created as a platform to support this interest, as well as to encourage the growth of art appreciation and collection in Indonesia,” Leo said in a statement. [Read more…]

Theatre: Four new directors choose plays about memory in the showcase ‘When We Were’
Star2.com

Over the past few months, four aspiring theatre directors have been working very hard at their craft. The young quartet – Ali Motamedi, Lim Sheng Hui, Hana Nadira and Khairi Anwar – were handpicked by Theatresauce, a local performing arts collective.

They are part of 2019’s Emerging Director’s Lab (EDL), a year-long programme to train new theatre practitioners. Between April 18 and 21, the four will be showcasing their theatre skills for the first time at Lot’ng Arts Space in Subang Jaya, Selangor. Each one is directing a play as part of the When We Were showcase, featuring four short plays. Each work explores themes of “memory”. 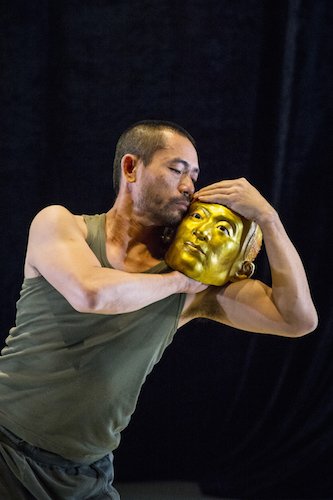 Representing whom or what?
The Nation

CHANG THEATRE in Thung Khru, Thonburi was filled up to capacity on the last weekend of March when “Behalf”, the new contemporary dance collaboration between Taiwan’s Chen Wu-Kang and our Pichet Klunchun, made its stop in Bangkok as part of the 2019 tour which started in Singapore a week earlier and followed on from the world premiere last May in Taipei.

Taiwanese expatriates as well as those from other countries were among the Thais in the audience, and their level of anticipation, as for any new work by such internationally acclaimed artists, was indeed high. Some 100 minutes later after the surprise-filled performance, no one was disappointed. And that wasn’t just because we’d just had yet another new experience in performing arts collaboration, but also because we had been inspired to think more deeply about cultural representation and exchange. [Read more…]

It was in the late 1980s in a swelling refugee camp on the Thai border where thousands were sheltering as soldiers from the Vietnam-backed regime in Phnom Penh fought the Khmer Rouge guerrillas they had toppled from power.

His instructor was a French aid worker, who taught drawing to Bandaul and his classmates, all young teens like him who were traumatized by an early childhood under the ultra-Maoist regime. More than 1.5 million people are estimated to have died as a result of the Khmer Rouge regime. [Read more…]

The third edition of the Krossing Over Arts Festival ended in Saigon on Thursday, capping a week of exciting workshops, artist talks and contemporary dance performances.

The festival, which now moves up to Hanoi, began last Friday with a performance of ‘At the Gates of Oblivion’ held at the Youth Culture House. Created by the festival’s founder Sebastien Ly, the show was built on Ly’s search for his family’s roots in Vietnam, and included an audio recording of his grandmother’s voice.

Following a pilot initiative at Hanoi’s Phu Sa Lab this January, British Council is now looking for up to 10 Vietnam-based contemporary musicians to take part in a new FAMLAB music residency program in Hoi An in June.

The residency forms part of FAMLAB’s ongoing Heritage of Future Past project and is organized in conjunction with Lune Production and Phu Sa Lab — including music director Nguyen Nhat Ly and members of the SEAPHONY Orchestra. These participants allow the collaboration to include in-depth musical exchanges on indigenous forms of Vietnamese music. [Read more…]

It is with unrelenting pride and excitement that we can finally introduce Rooftop Concerts, our new live music video series inspired by the likes of Tiny Desk Concerts and La Blogotheque.

As the name suggests, we’ll film these clips atop an assortment of Hanoi’s rooftops, bringing quality live music from distinct spots across the city’s ever-expanding canopy. Featuring established acts and up-and-coming artists alike, these short films will highlight the best of the capital’s growing music scene.