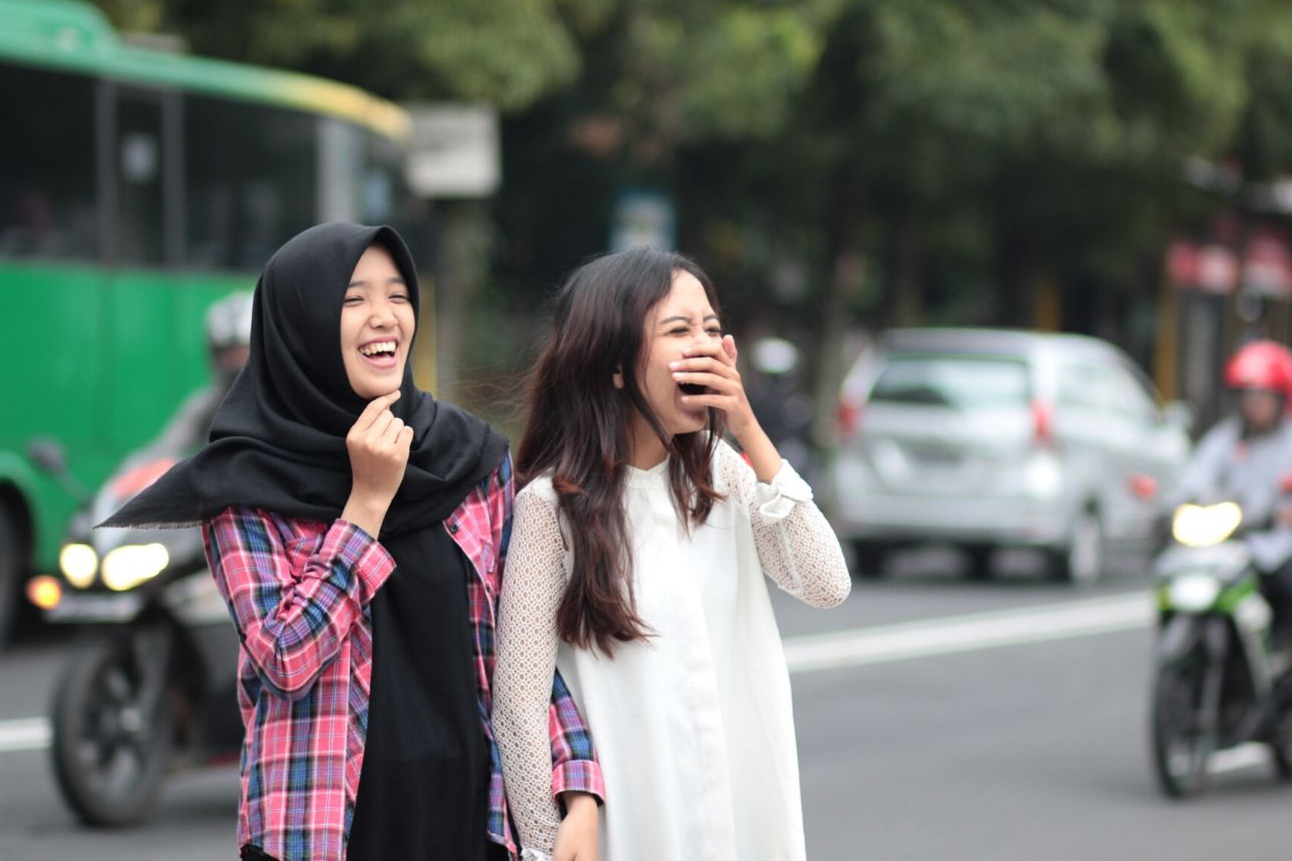 For International Women’s Day, ArtsEquator asked 11 women arts leaders in SEA to tell us about a woman who has inspired, supported or mentored them on their arts journey. Their stories recall mothers, bosses, Hollywood directors and an overlooked composer from the 19th century. We are inspired by the varied ways that women work together, encourage, lead and support each other in the arts. Sometimes it is through sacrifice, sometimes through leadership, and other times, it’s by making good art, raising the bar for excellence for everyone, regardless of gender.

In 2007 I started work at Epic Arts as the accountant assistant. I had a supportive boss for the first time, in Hannah Stevens. She saw my potential and my talents. She is creative, talented, and a very exciting boss to work with. Her leadership uses the participatory approach. She makes the work place fun, exciting and yet different and efficient. Hanna’s leadership helped me a lot to process the self-doubt I had, building my confidence, and helped me to accept and value who I am. This positive impact that she brought to me, gave me a door to look at myself and what I really wanted to do. One time she said to me, “Sokny, you will be a leader at Epic Arts one day.” That made me think, like, “wow!”. I had never thought about that before. It turned out she was right. I am now the country director at Epic Arts. I am really touched by this quote from John Quincy Adams, and I want to share with all your readers: ‘If your actions inspire others to dream more, learn more, do more and become more, you are a leader.’

My best friend Leigh Pasqual is a tremendous human. She is a mother, wife, daughter, super friend and activist.  She sets high standards for herself, both in her personal life and at work. She has written and documented for UN Women for many years and started her own not-for-profit organisation called Good for Girls, which supports girls in countries around the world to gain the education, skills and self-esteem to become independent, empowered adults. She is constantly thinking about how to better the lives of less privileged women. I know I can always lay myself bare with her – she might chide me and scold me, or sit with me and cry with me, or laugh loudly at the exact same things, but I know she will always love me. It truly is unconditional and I am lucky to have experienced it for 37 years. Leigh inspires me to be a better human.

The performer and writer Mislina Mustafa has been an inspiration to me, from the point of view of her talent and from the way that she has chosen to live her life. I’ve been in awe of her talent since I was a student at Akademi Seni Kebangsaan (ASWARA) in the late 1990s. Mislina was my senior then, and I followed her artistic activities. Her works were brave and defied formalities. At the time, the shows she created were small, presented for an intimate group of friends, without the help of the school administration or lecturers. There were times when her works were not allowed, but Mislina just went ahead and made the work. That is what made so many of us juniors feel valued, and gave us the inspiration and freedom to create art. I am also inspired by and admire her life choices – she is a single mother and a Muslim woman. She is determined to live life on her own terms: a powerful woman without a husband, without commitment, who is happy and content with her choices. I know that Mislina struggles in her artistic journey. She rejects any of the trappings of glamour. But for me, she is a success, as a woman. I respect her choices – it makes me feel that women become stronger when we have “hati besi” – we have a steely heart that allows us to do what we want, without caring what other people think.

I often draw strength and inspiration from women who create possibilities in spite of limitations. My mother, Bee Bee Bte Mohamed Salam, now 94 and with dementia, is one of those women. She never went to school, but that never stopped her from educating herself. She dragged me to all the classes she took and made me her personal scribe. I’d read to her and she’d recite back. She’d commit to memory recipes, crochet patterns and sets of prayers for her solo pilgrimage to the Haj. In my artistic endeavours, I believe grit and ingenuity conjure possibilities, and I am grateful to her for showing me the way.

I am inspired by many women, including Laksamana Kemalahayati, the female Admiral of Aceh. But in terms of music, Clara Schumann is a muse and maestra figure. She is overlooked because of the reputation of her husband, Robert Schumann. As a child prodigy, she played the violin, sang, and had counterpoint classes. At 13, she could play from memory. Her compositions contain sophisticated musicality. A Minor Piano Concerto is filled with cascading runs and daring leaps. Her Soirees Musicales (Opus 6) is a virtuoso piece. She performed to raise her family – over 130 performances in 14 years. This was on top of her 10 pregnancies and eight live births. Today, she is rightfully considered as one of the most talented composers of the Romantic era. I hope to leave a legacy of musical traditions for present and future students that will inspire them in the face of imitation and plagiarism.

A woman that has inspired me to do my best would be my mother, Mageswari Govindasamy. She’s been of support to my journey in music and the arts even though neither my family nor I have any musical background. When I first told her that I wanted to pursue a professional career in the entertainment industry at a young age, despite being filled with worries and concern, she backed me up with belief in me. Till today. That love is what inspires me to keep bringing my all, every single day. I want to make her proud, really proud.

I couldn’t write about a single woman, I have to write about women who have inspired me. First, my mother, Prapai Phantachat – she bought me books from the time I was a child. Books were expensive but she kept giving me books and the opportunity to reach the arts. When I chose to do theatre and make a living as a freelance writer and actress, she showed her worry but she didn’t say anything to discourage my choice. Second, my ex-bosses, Raviporn Jungmeir, aka Non, a casting director and Gridthiya Gaweewong, an art curator. When I had just graduated, I had the chance to work with these two ladies, in different jobs. Both of them gave me exactly the same quote that lifted me up in the midst of confusion, ‘Do what you love, money will come later’, so I chose to do theatre. Lately two female colleagues from B-floor, Dujdao Vadhanapakorn and Sasapin Siriwanij, in the way they deal with their life and work, have inspired me to reconsider my work/life balance. Now I can make peace with myself. 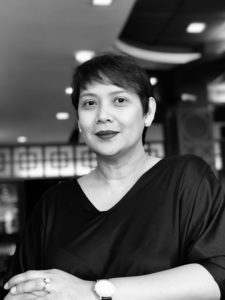 Prof. Norma Respicio was my teacher in college at the University of the Philippines, Diliman. She was the Chairperson of the Department of Art Studies in the same university when I entered as a graduate student of Master of Arts in Art Theory and Criticism. As a graduate student, she encouraged me to apply for a teaching post in the department. And that was the start of my teaching profession in higher education institutions. Dr. Respicio introduced me to the field of Philippine indigenous and traditional arts. Because of her in-depth knowledge and expertise in the field, she eventually became my MA thesis adviser. She opened opportunities for me to work with the National Commission for Culture and Arts as a researcher, conference facilitator, and rapporteur for local and international projects. I wouldn’t be where I am today without the encouragement and support of Ma’am Norma.

During the times when women had limited opportunities, Artimesia Gentileschi pursued her artistic training or work as a professional artist and was the first woman to become a member of the Accademia di Arte del Disegno, Florence. This work, Judith Slaying Holofernes, by her is well-known for its various interpretations of feminists readings. What inspires me about this piece however, is not the gory rendition of the male character being slaughtered, but actually the two female figures who draw our attention at the upper part of the work, together, in defeating the male character. Women could/should work together in overcoming obstacles in life, personally and professionally, as presented in this work.

Around the time that I was graduating, the film Point Break came out. It was essentially a guys’ film, it was a gritty, action-filled drama usually reserved for male directors but it was directed by a woman, Kathryn Bigelow. Kathryn Bigelow became my hero, at a time when I knew almost no women in leadership roles. She was a trail blazer who was ignoring the resistance to women making movies in the ’90s and the type of films women could make. I have followed her career since then. She has never been afraid to tell tough stories, and she is the first and only female director ever to win the Oscar for Best Director. Her journey inspires me to continue directing, to tell kick ass stories that I want, in my own way. She made me realise that my gender is irrelevant to my ability to be a director.

I never thought that working in the arts was actually possible as a career and a dream. From my aunt, I learnt that if you have a will but you see no way, you can build your own path. Her achievement in her choice of career in journalism. It led me to believe that everyone has equal rights to determine their own way of living and dreaming. She has experienced rejection, fear and terror in her journalistic work, but no matter what happened, she always pushed through. With integrity and commitment, she has done many incredible things including becoming one of the leading chief editors of TV news in Indonesia. Even though she works very hard and sometimes appears to be a strong woman, she always reminds me to put humanity first. And that includes to be kind to one another and have fun with those who you love most. Cheers to my aunt and my best friend, Rosianna Silalahi.

Compiled by Kathy Rowland, with thanks to all the contributors.