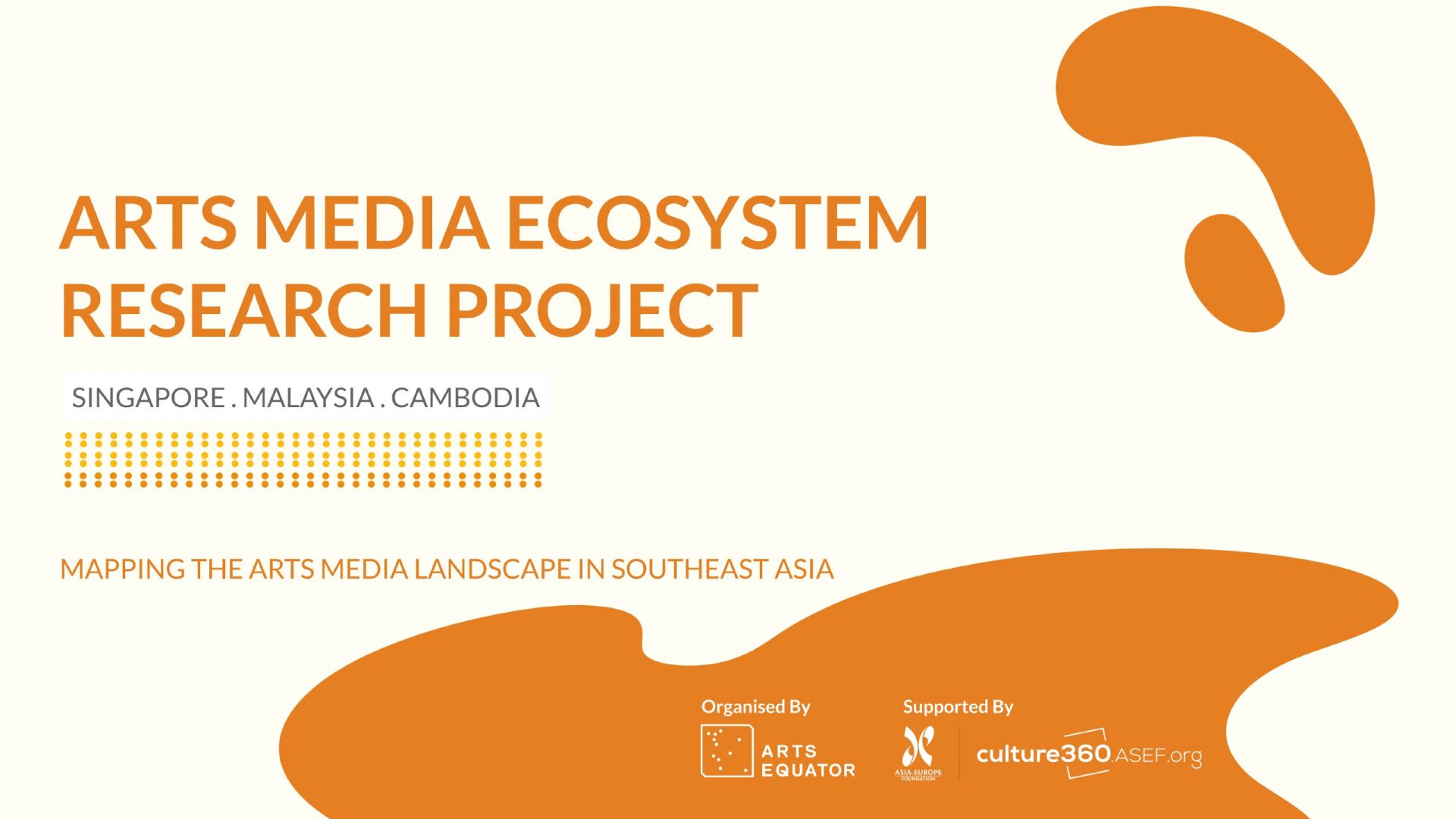 What is the state of the arts media landscape in Southeast Asia? Based on global trends, the answer seemed evident: the landscape has shrunk, and its impact on the arts ecosystem is a growing concern amongst arts writers, artists and policy makers. Yet there are still vibrant spaces dedicated to arts coverage, and the hunger for quality arts writing persists, as evidenced by multiple fledgling publications launched to cover arts and culture over the past few years.

In an attempt to better understand the regional arts media landscape, ArtsEquator and the Asia Europe Foundation (ASEF) conducted a pilot project to map arts media in Cambodia, Malaysia and Singapore. The project came out of the inaugural Asian Arts Media Roundtable meeting organised by ArtsEquator in May 2019.

This is not an academically driven research project. Rather it is an on-the-ground mapping, to create a baseline study of the arts media landscape, providing a snapshot of what arts coverage in the media is like in these three countries. The survey was conducted in Cambodia by Sokim Keat and Phina So with the support of Cambodia Living Arts. The Malaysian researcher, Nur Deena Anuar, was supported by a grant from Creador Foundation, while ArtsEquator’s Denise Dolendo carried out the research in Singapore.

In Cambodia and Malaysia, there were significant challenges to getting information beyond the metropolitan centres. Diversity in the language of publication limited our researchers’ ability to fully document and track the types of arts coverage, where it existed. Further, the pilot revealed the limits of these kinds of short duration desktop research. Amongst these was the inability to track the quality and range of arts content in a given publication over an extended period of time to fully understand the scope, range and frequency of arts coverage. Further, the pilot had to, for practical reasons, adopt broad strokes when applying the definition of arts and culture, although the data collected did attempt to distinguish between genres and types of content produced.

We acknowledge that the way that audiences consume information has shifted profoundly, even conclusively, in the direction of social media and user-generated content. The data includes social media channels that were exclusively dedicated to promoting arts and culture. The research here, and indeed the general concern with the decline of arts media, is not an attempt to deny that these channels have been enormously beneficial to artists, arts companies and arts audiences, who no longer have to rely on old-school gatekeepers for access to information. Rather it is an attempt to understand what falls between the cracks as the spaces for editorial oversight, long-form writing and independent criticism narrows.

We present here, selected preliminary findings from the three-country pilot: 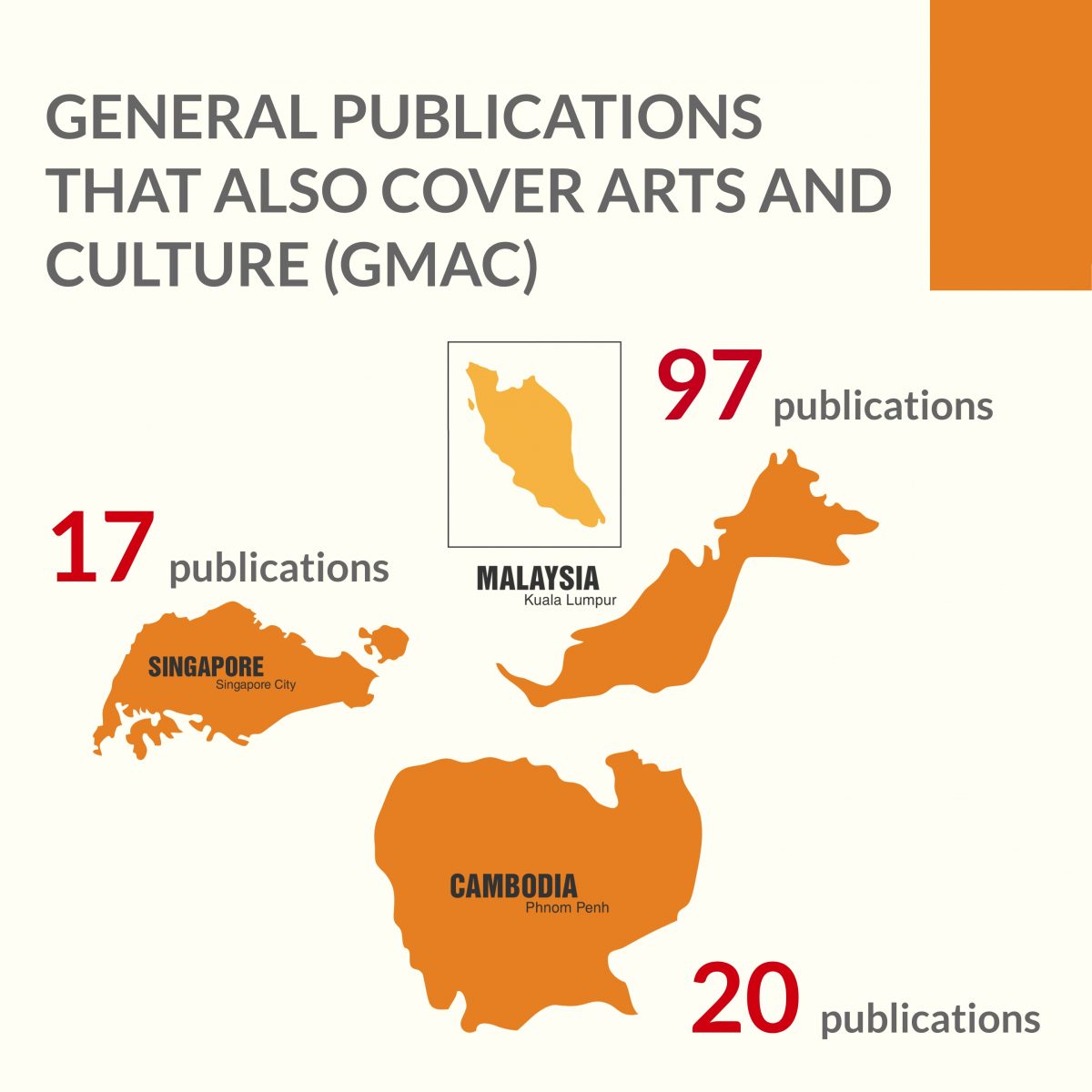 In terms of sheer numbers, Malaysia topped the list. The media landscape in Malaysia, reflecting its population, is diverse linguistically and and spread out geographically. Given Singapore’s smaller population size, it was to be expected that there would be fewer publications. Despite Cambodia’s troubled decades-long history, its fledgling media space, though small, is encouraging. As a matter of course, most general publications carry some arts and culture content, but our research showed that the frequency and quality of arts and culture coverage was greatly wanting.

We did not include content on popular culture, TV, international and local mainstream films, fashion and other forms of popular culture and entertainment, as our focus was on the underserved local and regional arts and culture scenes. However, often, within the broader definition of arts and culture, pop culture and entertainment made up the lion’s share. While the researchers tried to wean these out, it was not always possible given the way these contents were branded in the publications themselves. 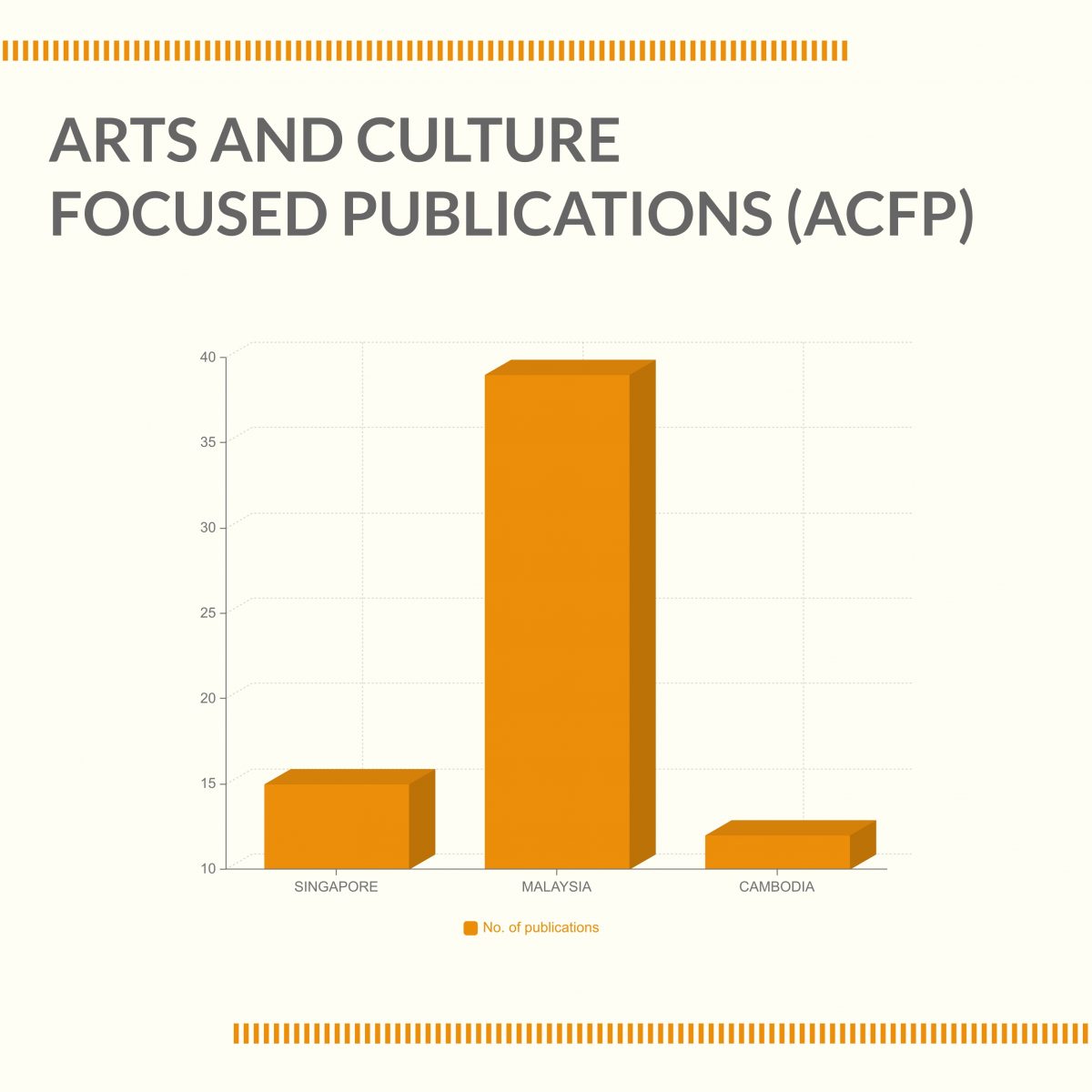 It was encouraging to find that all three countries had publications dedicated exclusively to arts and culture, although the kinds of content carried (more on this later), revealed some worrying gaps.  Amongst the 37 Malaysian ACFPs is Dewan Budaya, a monthly magazine published by the National Language and Literary Board that will celebrate its 50th anniversary this year. Despite arts writing being in its infancy, in Cambodia, the researchers cite SEANG Sokcheng, co-founder of online website Wapatoa, which means ‘culture’, as an example of the young writers eager to develop new spaces. They note however that many of the ACFPs are more likely to run listings and activities and not a critical analysis of the arts. A further issue in Cambodia is that many young writers are trained overseas and write in English instead of Khmer, limiting the reach of their works. 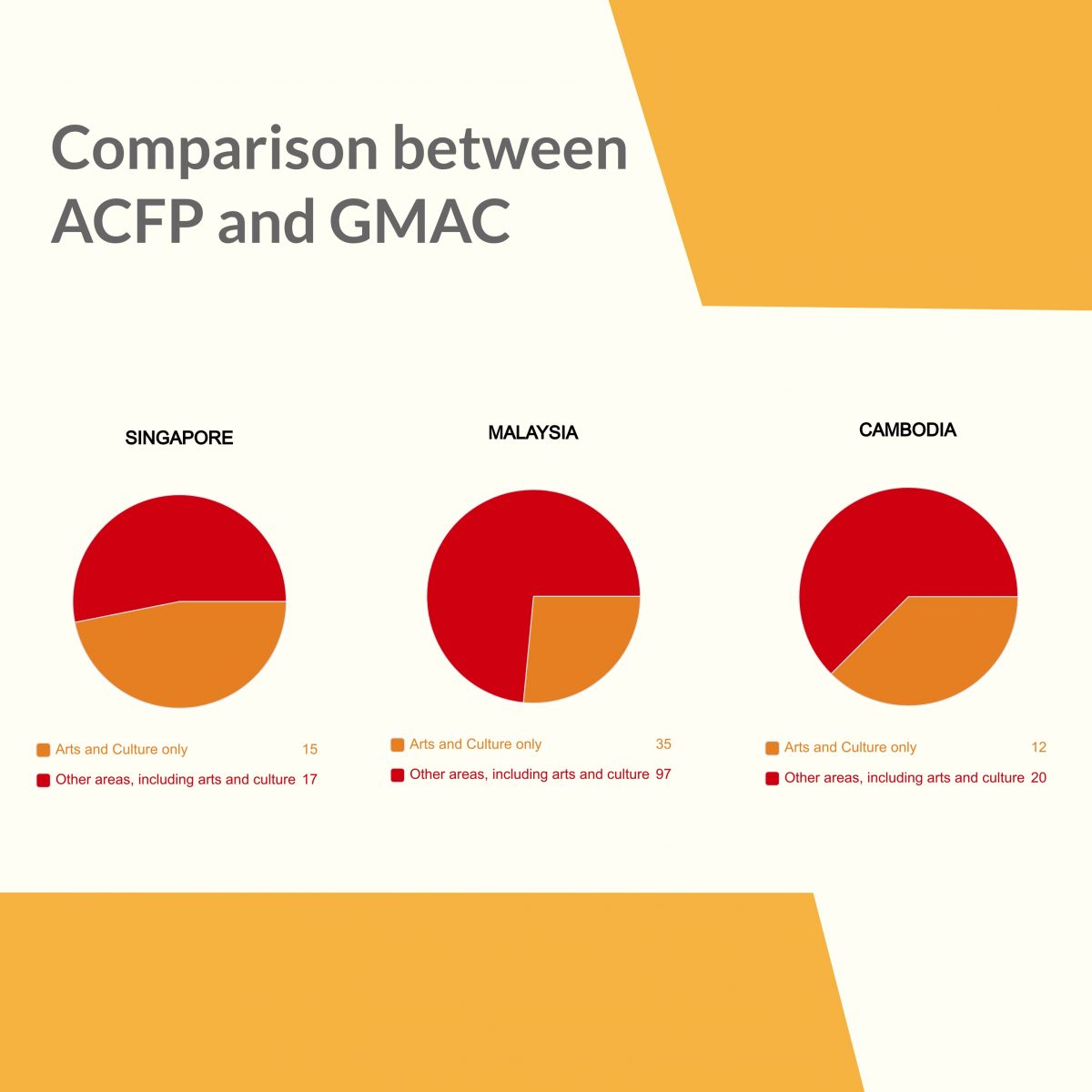 Relative to its small media footprint, in Singapore, close to half of all media that carry arts and culture content are publications that focus on arts and culture. Some of these publications are produced by arts institutions themselves, such as The Esplanade’s website, Offstage, which has evolved from a site promoting the art centre itself into a respected platform which publishes original arts-related content. Overall, the findings seem consistent with the widely held view that the Singapore arts scene is one of the most developed and institutionally robust in the region, due in part to the state’s forward-looking policy and funding programmes over the past few decades. Cambodia’s 12 publications dedicated to arts and culture is also a positive sign, and speaks to the revitalised arts and culture space that recent policy initiatives may have helped to engender. 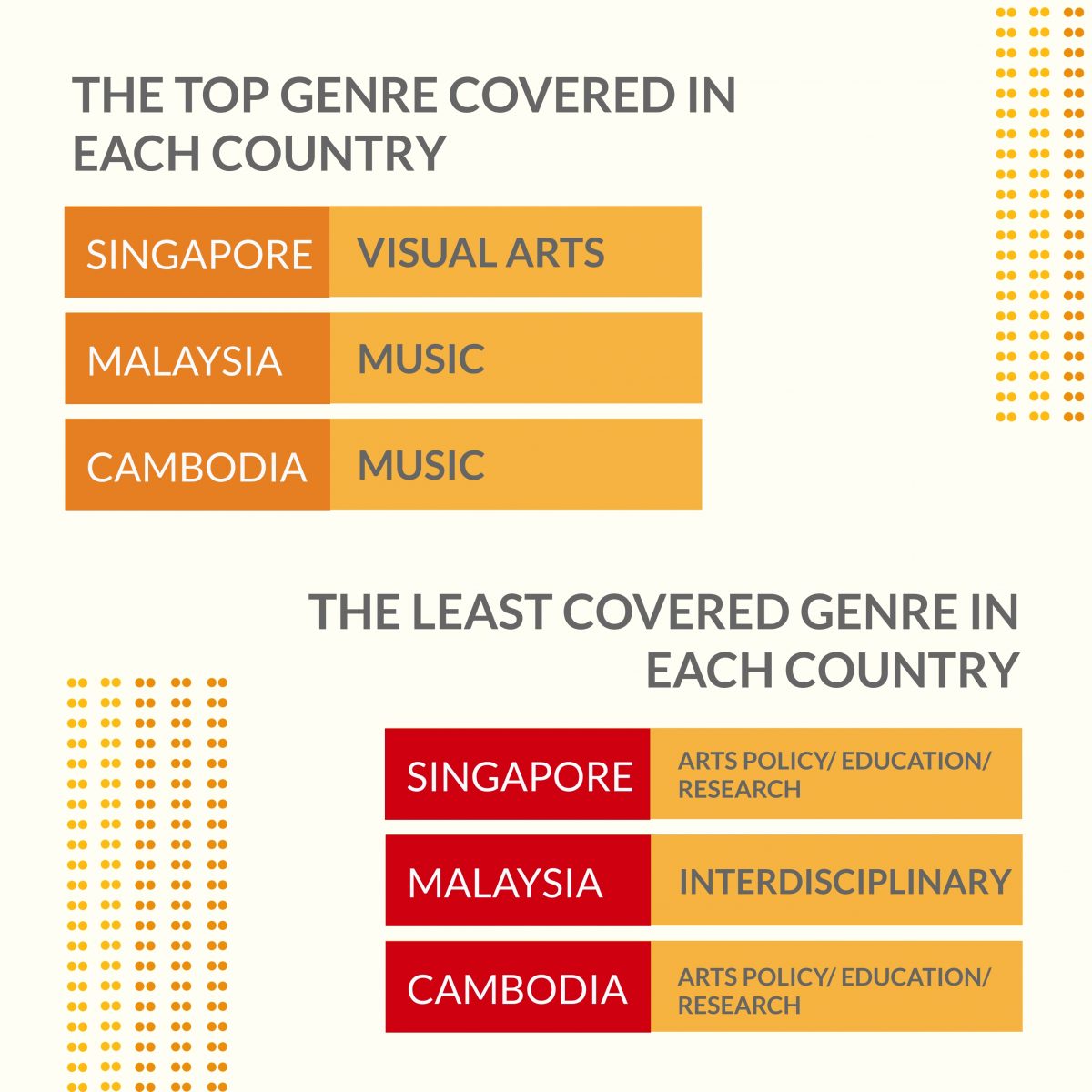 Visual arts received the most coverage in the media in Singapore, a scene that is active locally and has an increasingly regional reach. In Cambodia and Malaysia, it was music. Although pop music was excluded from the survey, coverage of music by local independent musicians was included, an area that is relatively active in Malaysia and Cambodia, which may explain the data. However, further research is necessary to support this assumption. Initial findings also reveal that few publications featured content on arts policy and education, which given the specialist nature of these areas, is not surprising. In Malaysia, the lack of coverage on interdisciplinary work again requires more research. Is this because there are few artists making such works, or because arts writers chose not to cover the form? Both Singapore and Malaysia have active performance scenes, so the research indicates media coverage of live theatre and dance is an area of need. 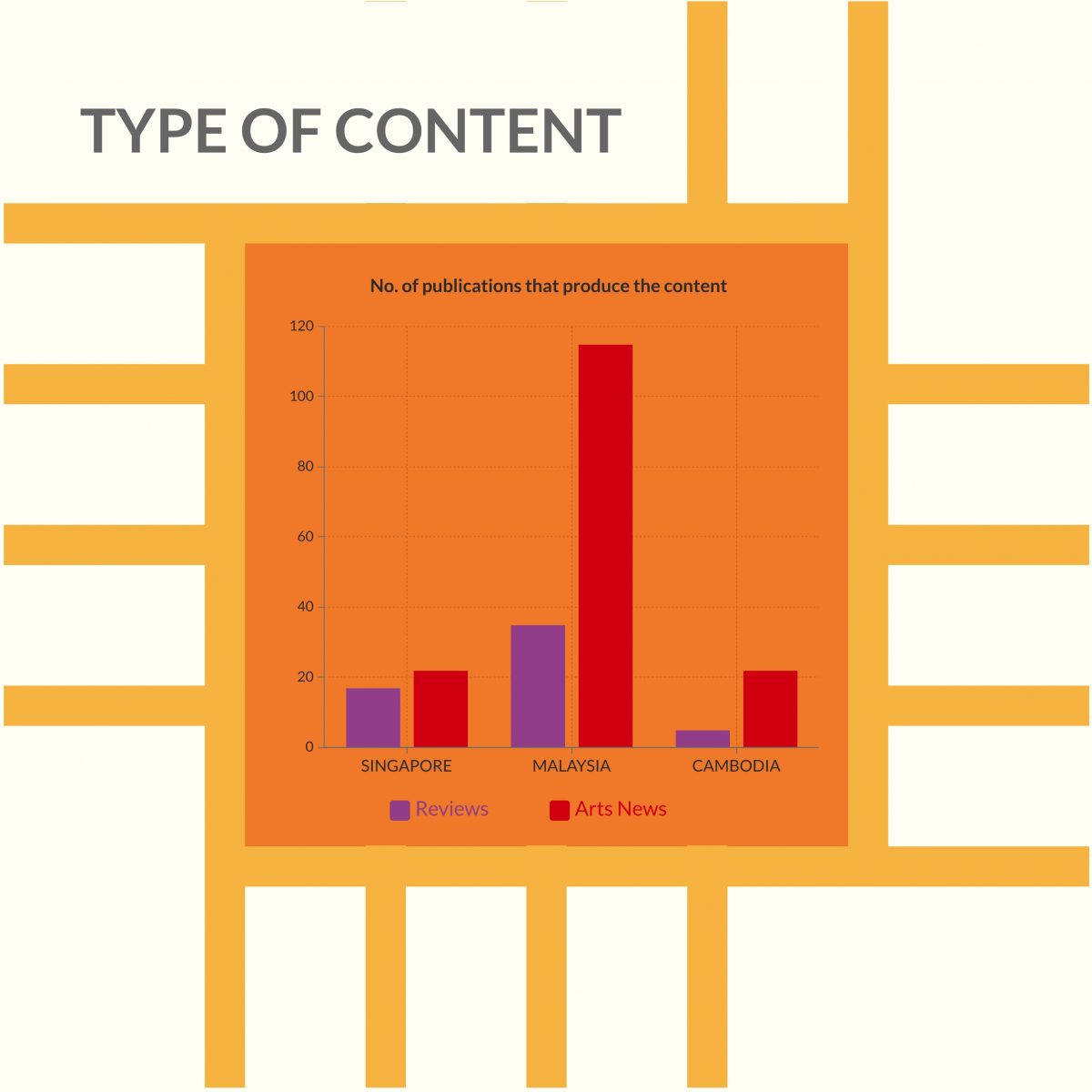 Anecdotally, the arts communities in all three countries have noted the shrinking spaces for reviews and criticism, and the data in Cambodia and Malaysia supports this perception. Articles published in GMACs, and even in ACFPs, leaned towards events listings, general arts news, previews and feature articles, while critical pieces were scarce. While these are important engines to market the art and build new audiences, the former do not deepen understanding, develop critical thinking or engage with the artistic vision the way that reviews and criticism do. In Malaysia, almost all the mainstream English media had ceased carrying reviews for some years now, although several of the Malay and Mandarin newspapers continued to do so. However, in Singapore, the media space appears quite balanced and indeed, publications like the ArtsRepublic, ArtsEquator, Bakchormeeboy, Five Lines, Re-Reviews, The Straits Times,  and until recently, Centre 42, have provided important spaces for criticism, even if there are concerns about sustainability. Notably, with the exception of The Straits Times and Centre 42, all the other sites named here were started off as independent, self-financed projects.

There were a variety of funding sources, but ‘self-funding’ was one of the most cited by ACFPs. In Malaysia, of the 35 AFCPs, 22 listed self-funding as one of multiple sources of income, while in Singapore, 10 out of 15 such publications surveyed continued to tap the founders’ own funds to stay afloat. In Malaysia and Cambodia, the second most cited source of funding was public funding, followed by income earned via advertising and other activities. In Singapore, data points to income earned from projects and advertising in second place, with public funds in third place. Other sources of funding included private sponsorship and grants. We were unable to get data on the quantum of funds from each of these sources per publication – a gap in the research that we hope to address when the project is extended. What is evident is that publications are drawing on multiple income streams in order to survive, and in a significant number of cases, ACFPs are still dependent on self-funding, which raises questions about long-term sustainability.

These preliminary findings validate the growing concern that arts media landscape is in flux, as is the wider arts and culture sector. Coverage in general media favours lifestyle-driven popular culture and entertainment. Even in ACFPs, critical analysis and review are losing ground. Perhaps in response to these losses, there have emerged different community and individual-driven platforms – on social media, in podcasts and on websites – dedicated to arts coverage, a trend evident in Singapore. These efforts prove that there is a need and a desire for more in-depth arts coverage. However, all three researchers found that multiple platforms, from established news dailies such as Malaysia’s Utusan Malaysia to Singapore’s pioneering The Flying Inkpot have either ceased arts coverage or shut down permanently. COVID-19 has only made these issues more acute. Further research is needed to understand the impact of the attrition rate of arts media upon the wider ecosystem.

This exercise in mapping Asian arts media is the start of what we hope will be a more in-depth and refined mapping of arts media in other Southeast Asian countries. With extended research, we hope to produce data that may prove useful for policymakers, arts organisations and media groups to identify patterns of coverage, potential areas of growth and areas in need of policy intervention and support from public and private funds in the future.

Kathy Rowland is the co-founder of ArtsEquator.