Malaysia’s film industry is moving in the right direction
Star2.com

This year’s Malaysia Film Festival (FFM), its 30th edition, honours the most prestigious films while having a varied list of nominees in each category.

The champion of the event held at Plenary Hall, PutraJaya International Convention Centre, on Saturday was the film Crossroads: One Two Jaga which won a total of six awards including in three main categories.

Yangon, Myanmar – A riotous crowd gathered before a throbbing stage as loud music blared from speakers and sweaty musicians jammed to an eager beat. Young people in black studded leather jackets and spiky multicoloured hair hurled themselves into the air.

“This one is for Wirathu – look at what you’ve done,” shouted the lead singer, referring to one of Myanmar’s most prominent Buddhist nationalists, before launching into a song condemning religious violence.

The band Side Effect is one of Myanmar’s most popular punk rock bands and among a growing number of musicians rallying to combat hate speech. The performance came as religious tensions escalate in the former military dictatorship leading up to a landmark general election on Sunday.

In late August, Myanmar’s President Thein Sein approved the last of a package of controversial race protection laws widely viewed as an attack on the country’s Muslim minority. [Read more…] 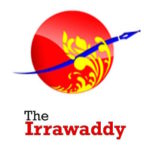 YANGON—Myanmar’s own Oscars, the Myanmar Motion Picture Academy Awards ceremony, was held on Saturday at The One Entertainment Park in Yangon, and proved one of the most controversial events in the local entertainment industry so far this year. Movie lovers have denounced the academy board’s awarding decisions as unfair and biased.

But this is not the first time the Academy Awards have caused disagreement. Last year’s event also stoked public argument when the awards for the Myanmar film industry, which is widely believed to be transforming and modernizing, failed to recognized the new style of creative movies made by emerging directors at the event. [Read more…]

Street art in the Vietnamese capital remains a nascent scene, yet it is growing swiftly, with both Vietnamese and foreign artists in the mix.

For local artist Zunk, to paint is to be part of a community. “It’s been amazing for me. At this time, the scene is really active. Matthew ‘Phed,’ who passed away four years ago, had a big impact. We’ve been making a memorial wall for him together every year since then,” Zunk shares.

Some focus on tagging, or “bombing,” while others specialize in murals or artwork that deliberately attempts to benefit the community. “I have contact with one artist who paints electricity boxes on the pavement” Zunk adds. This artist works with authorities and gets approval for specific designs, and so “people take it easier than graffiti.” [Read more…]

In recent decades, Thailand’s art scene has seen a decline in male dominance and the emergence of a small yet influential clutch of female curators. Who are they? What drives them? And what are their views on the state of exhibition-making in the Kingdom today? Their backgrounds, approaches and opinions vary, yet all are too absorbed in the moment to worry much about gender politics or how level the playing field is or isn’t. As Wonderfruit festival’s Bow Nikan Wasinondh puts it: “There are more worrying issues, such as challenges in getting proper support for the arts, art education and the collection of contemporary Thai art.” [Read more…]

“CHAROT” is gay slang, one of the many fluid terms generated by popular lingo, often used as an interjection to express the flimsy nature of a statement and to which the appropriate response should be… charot, or char, its abbreviated expression. The word has permeated popular culture such that in television, radio, and social media, the term is used with impunity.

PETA’s season-ender derives its title and spirit from this piece of gay slang. In this one-hour and 45-minute play, charot stands for “charter of change,” an obvious reference to the efforts of the lower house and the President to engineer a fundamental change in the constitution toward a shift from the presidential system of government to a federal form. In this play, PETA takes an unequivocally political position, one that exposes how the President undermines the constitution. [Read more…] 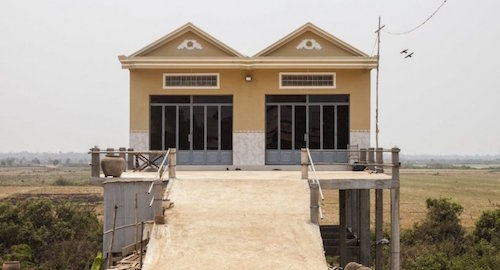 The overall story of MAIIAM – a newly-opened private museum of contemporary art in Chiang Mai – is being told in the exhibition, “Temporal Topography: MAIIAM’s New Acquisitions; from 2010 to Present”, at the museum’s Gallery 1. 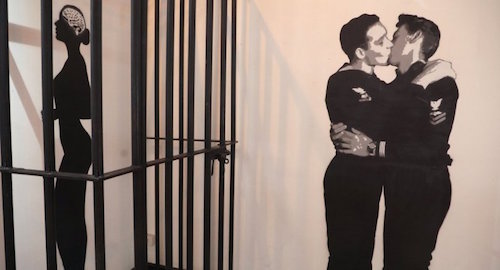 Sex, drugs and no easy way out
The Nation

Patpong , Bangkok’s most notorious red-light area, seems a likely enough place to provoke a discussion about sexual attitudes in this country. Even better, have the discussion at Candle Light Studio, a new gallery for naughty art above the Barbar Fetish Club on Patpong Soi 2. The provocateur is the masked graffiti artist who calls himself Headache Stencil, fresh from skewering the junta government and chaotic election in his previous show, “Thailand Casino”. The exhibition, “Sex Drugs & Headache Stencil”, officially opens Candle Light Studio, which apparently used to be a go-go bar. Families with small children can easily reach it from BTS Sala Daeng but probably shouldn’t. [Read more…]

Italian fashion label Max Mara has been accused by the Traditional Arts and Ethnology Centre (TAEC) in Luang Prabang, Laos, of allegedly stealing the designs of an ethnic minority group.

The TAEC took to its official Facebook page on April 3 and shared photos of dresses, tops and skirts from a Max Mara store in Zagreb, Croatia, that bore designs allegedly belonging to the Oma ethnic group.

The Oma designs are traditionally used in the group’s headscarves, jackets and leg wraps, as per TAEC, but the fashion label allegedly used it in its collection with no mention of Oma in its online and physical stores. [Read more…]

One of my earliest memories of hip-hop involves riding in a school bus with my classmates on the way back from Scout camp. We were around twelve or thirteen years old, and a song was blasting on the radio. It was the hottest song of the moment: “Ta Lueng” (meaning “immodest”, or “cheeky”), by the group Thaitanium, one of the first hip-hop acts in Thailand. There wasn’t much to the song except for a catchy hook about sidling up to hot girls and trying to cop a feel, but it caught on like wildfire; before long, it was playing everywhere — in shopping centres, in nightclubs and even in classrooms between lessons.

For many of my generation, our understanding of hip-hop was quickly associated with the rise of Thaitanium. Hip-hop became the “hip” young thing, the edgy genre of music we felt was offensive to or misunderstood by the older generation. Listening to it felt like misbehaving, like finally being one of the cool kids. We had no knowledge of how hip-hop was born or how much it meant to the African American community before it became a global art form. We knew nothing of the likes of Rakim, Nas, A Tribe Called Quest, Mos Def or Tupac Shakur. To us, hip-hop was just dudes in sunglasses and gold chains, flanked by scantily clad women — dudes allowed to say bad words and outrageous things in their songs. [Read more…]