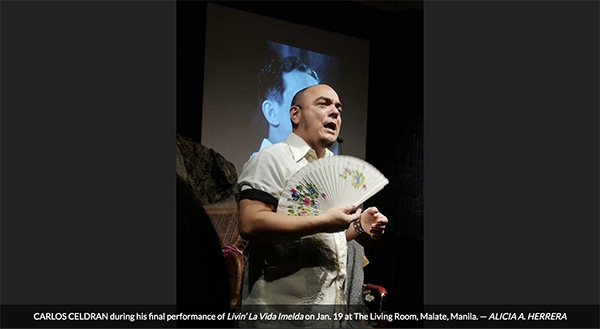 CARLOS CELDRAN, the artist and activist who loved the glorious mess of Manila, passed away at the age of 46 in Madrid, Spain. His death was announced in a Facebook post by his wife, Tesa. “As the family is making arrangements to bring him home, no details can be announced yet. Only that he passed from natural causes,” the post said.

A social gadfly who riled up those in power, Mr. Celdran decamped to Madrid in January 2019 after being convicted of blasphemy. His Damaso performance, a one-man protest against the Catholic Church’s meddling with a woman’s right to birth control, “offended religious feelings” to the point of litigation. “I left the Philippines due to an aggressive political climate and human rights reasons,” Mr. Celdran wrote on his blog.

In February 2018, Mr. Celdran mounted the first edition of the Manila Biennale, an art festival that aimed to revitalize both Intramuros and the art scene by transforming the Walled City into a vibrant arts-and-cultural center. “I’ve always found art to be the most powerful way to change society, change the status quo. I think it’s always better to inspire than to intimidate. Because there are only two ways of making Filipinos change: you force them to change or you inspire them to change. And the best thing to use is art,” Mr. Celdran said in an interview.

Loud rhythmic drumming shakes the room. About half a dozen performers then beat out a tune on Chinese drums, gongs and various other percussive instruments. Then the distinctive – magical – strings of the sape (a traditional lute from Sarawak) joins the action.

Somehow all the instruments in this busy studio room blend beautifully together.

This was the scene at a recent rehearsal for Laguku 2.0, the latest show from KL-based Orang Orang Drum Theatre.

Bookstores in Singapore are closing at such a rate that, in a few decades, only the old will recognise these words. People will respond to them with the same nostalgic tilt of the head that mentions of DVDs or Heeren trigger in us today.

This is not a far-fetched dystopian future. Already, Kelly & Walsh, once the stalwart of bookshops in 20th-century Singapore—it was the first building on Raffles Place to be air-conditioned and was even visited by King Chulalongkorn in 1896—is all but forgotten.

And then there’s Page One. Harris. San Bookstore. Booktique.

Why are bookstores in Singapore in such dire straits? Are local conditions so hostile to books?

Film programming, the most underrated job in the industry
Jakarta Post

When we talk about the film industry, what generally comes to mind is how a film is funded, produced, and distributed. We often take it for granted that mainstream cinemas are the only distribution channel for films. We often forget that there are many, many great films in this world that reflect and resonate with our culture, and that these films may not always fit in with mainstream cinema, which is grounded in capitalism.

This is where film programming comes in to save our film ecosystem. Every film festival, community film screening and alternative cinema run specific programs that are vessels filled with hidden gems, most of which we know nothing about. These films are carefully selected by film curators, also called film programmers, who evaluate and research each film for screening.

Review: When Indie Music Meets Indie Cinema on a Grab in Saigon
Saigoneer

In today’s aggressive stream of Marvel blockbusters, doll- and shark-themed horror flicks, and gratuitous comedies, Troi Sang Roi, Ta Ngu Di Thoi (Good Morning and Good Night) is like a stubborn wild salmon trying to defy the strong current. But is it succeeding?

I watched Troi Sang Roi on a Monday. It was just three days after the film’s premiere last weekend and the sky was a crisp rainless blue, but only two and a half rows in the theater were filled. Admittedly, for a prime evening slot in one of Galaxy Cinema’s biggest auditoria, the sparseness was a little disheartening. Still, the ragtag band of us stuck to our greasy popcorn and the hopes of getting our heart pumped full of Saigon love.

The Bangkok International Performing Arts Meeting (Bipam) is back with a myriad of extraordinary activities to be held at many different venues across Bangkok over five days from Oct 16-20.

Held under the theme “Eyes Open”, this year’s festival will bring a total of 25 rounds of seven showcase performances by Thai and international artists.

Highlights include Damage Joy, a participatory theatre experience by B-Floor (Thailand), which will take the audience to explore a dark circus world; In Ter’s View x New Cambodian Artists, which addresses the dancing experience and personal life of a group of Cambodian dancers; and Violent Event, which presents the issue of violence in quite raw yet dispassionate forms. The other performances will be The Grand Balcony by New Yangon Theatre Institute Ensemble; Women/Inside; a double bill by university students; a play reading of The Optic Trilogy by Thai and Filipino actors; and Sadub, a hearing-based performance by Noise Theatre.

Considered one of the world’s most important literary works, the Ramayana has captured the imagination of many who read or listen to the Indian epic.

The poem, believed to have been written by Valmiki in the 5th century BCE is one of India’s two great literary works after the Mahabharata.

With all of its 24,000 verses composed in Sanskrit, the story of Rama and Sita has been told and retold for countless generations in the Southeast Asian region.

The Ramayana tells the story of Prince Rama who goes in exile into the forest for 14 years upon the orders of his father together with his wife, Sita, and brother, Lakshamana.

Unfortunately, tragedy strikes when Sita gets kidnapped by the evil demon king, Ravana. Rama begins his quest to rescue his wife through the help of the Vanaras, a clan of monkeys.

While the Ramayana has been popularized as a love story, the saga of Rama deals with many themes that we often encounter in life. Because of this, the story has been told in various forms.

From comics, to films, animated features, television series, painting, dance, theater and exhibitions, the Ramayana is now a part of a larger narrative of the world.

Ten years since its inception, the Narratives In Malaysian Art (NMA) series draws to a close with the launch of its fourth and final volume, Perspectives, this weekend.

When the project was initiated a decade ago, Beverly Yong, co-editor-in-chief of the NMA series and co-founder of regional art specialist RogueArt, recalls that the ideas were aplenty and the team dove in with enthusiasm.

“We had many ambitions! We wanted to bring together a multiplicity of voices to share knowledge and insights about art practices, history and infrastructure in Malaysia. We wanted to document and acknowledge the important work of artists and the efforts of the art community,” says Yong.

“Also, to encourage more art writing and for the books to be a resource and inspiration for further research. We wanted to help create wider appreciation and understanding about the potential for art as a means of broadening our learning and understanding of ourselves as individuals and as a society,” she adds.

The result after a decade’s work?

A four-volume series (available in both English and Bahasa Malaysia) that represents over 200 voices from different generations and disciplines, conveyed through writing, interviews, forums and surveys. NMA is published by RogueArt.

Humans have always been artists, in one form or another. Murals and sculptures have been around since the dawn of mankind with, among many others, the Ferrasie cave Petroglyphs (around 60,000 BC) discovered in France or the Sulawesi cave art (around 37,900 BC) of Indonesia.

Many of the most ancient artworks discovered are miniature sculptures such as the Venus of Tan-Tan (200,000 – 500,000 BC) or the Venus of Berekhat Ram (230,000 – 700,000 BC) and the artistic medium has survived to modern days with artists like Picasso and Giacometti.

In Myanmar, two young sculptors have also decided to downsize their artistic outputs. Their most famous artworks to date are tiny reproductions of the Barkayar crossroad in Yangon, a creation which has received thousands of likes and dozens of shares on Facebook.

JAKARTA — The art fairs of Asia aren’t for the faint of heart. These extravaganzas aim for maximum sensory impact and require a high tolerance for mingling with masses of people. Basically uncurated, they offer the visitor a comprehensive survey of the market and an opportunity to experience a wide variety of exceptional art. Art Jakarta promotes itself as the biggest art fair in Indonesia, which is the biggest country in Southeast Asia by far. The 11th edition, in the mammoth (at over 40,000 square feet) Jakarta Convention Center, was big indeed, and it attracted a big crowd.

Since bigness is one of the qualities that Art Jakarta aims for, the three-day event, which concluded on September 1, must be judged a success. Just as a car show needs a Batmobile to give visitors an exciting selfie-op, Art Jakarta had Eko Nugroho’s 16-foot-tall hanging textile “Moving Landscape,” a kaleidoscopic explosion of brilliant color with spooky hanging tentacles. (Executed entirely by hand embroidery, it must set the world record for stitching hours in a single work of art.) Wave of Tomorrow, by Isha Hening, is another crowd-pleasing work — a catwalk of glittering lights and pulsing music that evokes the entrance to a New York discothèque in the 1970s. According to the fair’s organizers, it celebrates “the advanced spirit of art and technology-based progress.”