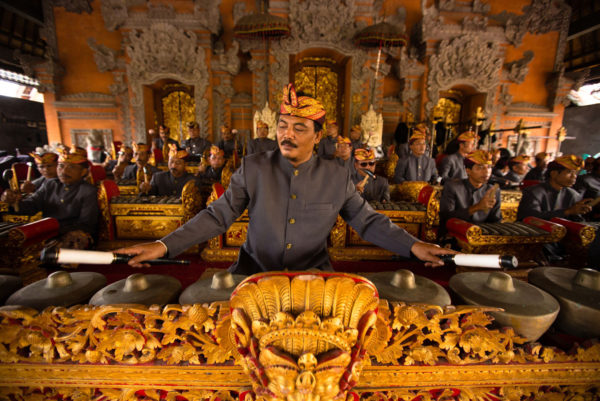 Ex-envoy’s message to diplomats: More beaches, less gamelan
The Jakarta Post
Indonesia should focus more on promoting its beaches and clear blue skies instead of leading with its trove of cultural traditions as a selling point to attract more visitors, said former Indonesian ambassador to Poland, Peter Gontha, on Wednesday.

“When I came to Poland, the [embassy] staff immediately said to me, ‘let’s promote Indonesia and gamelan!’ But I just had to say ‘stop that,'” Peter said during a discussion on cultural diplomacy hosted by the Foreign Policy Community of Indonesia (FPCI) in Jakarta.

Peter, a successful businessman and founder of Indonesia’s most popular music event — the Jakarta International Java Jazz Festival — has made the case that a country’s rich traditions might not necessarily be its strongest suit when it comes to reigning in more foreign tourists.

“I’m proud of my culture but if I bring in gamelan [a traditional music ensemble] to Poland, […] they will say, ‘nice music; which century?’ They would look at us like a backward country,” he said, recounting his ambassadorial duties overseas. [Read more…]

Museums and history books rarely factor into presidential politics. But as Indonesia’s presidential election approaches, they have become sites of political anxiety. All of this is due to the ongoing legacy of the Suharto regime’s 32 years of political manipulation. Two decades into the democratic restoration known as “Reformasi,” the shadow of the dictatorial New Order still darkens public discourse on crucial aspects of Indonesian history.

The Year of the Pig begins with some sad news for Hanoi’s creative youth. This month will see the closure of one the city’s most popular art quarters. 60 Square, which reopened after the Tet holiday yesterday, will close for good on February 15.

The space was never expected to remain open long-term – a short lease of only a few years was offered to the tenants – although it was expected to last at least another year. Due to a change of ownership, however, the current occupants will no longer be able to rent the buildings. [Read more…]

One Artist, 500 Volunteers and 168,000 Recycled Straws: A Clarion Call Against Plastic
Saigoneer

Viral photographer Benjamin Von Wong is no stranger to making waves with his mind-blowing photography, often dedicated to raising awareness about environmental issues while blurring the lines between the hyper-real and the fantastical.

His latest masterpiece, ‘Strawpocalypse: The Parting of the Plastic Sea,’ done in partnership with local nonprofit organization Zero Waste Saigon and Starbucks Vietnam, brought together a collection of environmentally focused people, all seeking to spotlight the negative environmental impacts of plastic straw usage. The striking installation is made of 168,000 straws. [Read more…]

Promoting environmental consciousness by observing Cambodia’s past while simultaneously looking forward to the future. That’s what some of the Kingdom’s most celebrated artists plan to achieve by collaborating in a new exhibition called Face Forward at the Treeline Gallery in Siem Reap’s historic Old French Quarter.

The contemporary art exhibition opened on January 26 and will run until March 31, and features work by Sopheap Pich, Thang Sothea, Nov Cheanick, Asasax and HKA & Partners focusing on the themes of sustainable consumption and production.

“I wanted to create a sanctuary that communicates our deep-rooted respect of nature whilst celebrating the vision of contemporary Cambodia, as reflected in the design of Treeline [Urban Resort], in the artwork we feature and the artists we work with,” he said. [Read more…] 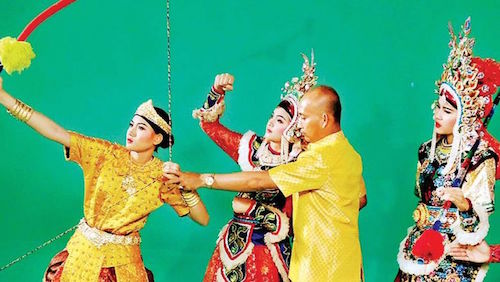 Traditional art forms struggle to survive in today’s technology focused, entertainment rich modern society. But there is one form of traditional Khmer theatre that is pushing back against this trend and striving to once again captivate Cambodian audiences.

The art form is believed to be influenced by China’s iconic Peking opera, and received its name because historically it was performed in the highland provinces along the Bassac River flowing through Cambodia and Vietnam. [Read more…] 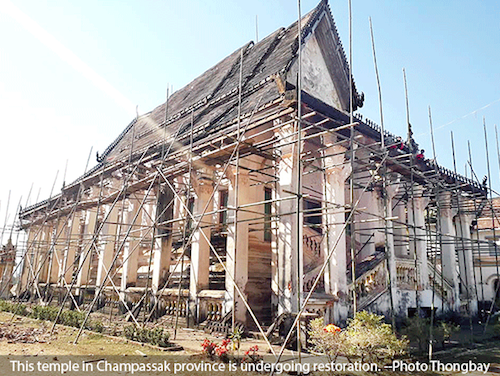 A French aid organisation has expressed its intention to help the Lao government protect heritage sites and infrastructure in Savannakhet and Champassak provinces.
Director General of the Heritage Department, under the Ministry of Information, Culture and Tourism, Mr Thongbay Phothisan, said yesterday that Agence Francaise De Developpement (AFD) has sent a team of French experts to Laos to set up a project that will preserve some of Laos’ oldest and most important buildings.

“We completed a session with Champassak officials yesterday. Today, we will have more talks with Savannakhet officials,” Mr Thongbay said, adding that the discussions are aimed at ensuring that the two sides agree on the parameters and scope of the project.

Mr Thongbay told Vientiane Times in a telephone interview from Savannakhet that the main focus of the project will be on restoring and maintaining temples, houses and French colonial buildings that are of cultural significance in the two provinces. [Read more…]

Into the light, by way of dance
Myanmar Times

The entire studio is dark, save for one small light at the end of the room. The light is powerful, throwing flittering shadows against the opposite wall as bodies weave and spin in its beam. Of about ten youths dancing in and out of sight, one stops dead in the beam and contorts their body to create a silhouette – they call out that it’s the Eiffel Tower. Everyone laughs.

The ‘Creative Dance Crew’ uses these methods regularly. Making shapes and interesting interactions with bodies, shapes and light is what they love to do. They harness street dancing methods – things like the robot, popping and locking, hip-hop combined with more free expressions. The shadow dancing is the big achievement as it is more abstract and visually projecting. It was inspired by El Gamma, the shadow dancing troupe’s competition at Asia’s Got Talent.

The shadow dancing was provocative enough that the group was invited to partake in an ed-entertainment program at the Union Parliament. But long before that accolade was pinned on the group, they were performing on Myanmar’s Got Talent. It was a risky choice – their dancing talent was supplemented with a message raising awareness of child sex abuse from the victim’s perspective in shadow dance. A heavy topic for light entertainment but their treatment paid off when they won the competition last year. [Read more…] 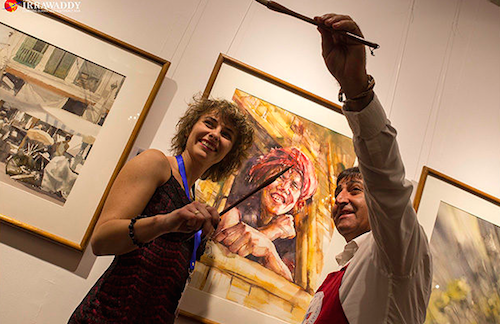 YANGON — The International Watercolor Festival (IWF) opened in Myanmar for the first time on Tuesday with works by more than 100 artists on show.

The International Watercolor Society (IWS) has been bringing the festival to countries across Africa, Asia and Europe over the past few years to promote art, watercolor and peace.

“We hope to create a strong friendship between international artists and artists from Myanmar through this festival, and we have a chance to study other artists’ pieces,” artist and IWS Myanmar head Min Wai Aung said at the opening event at Yangon’s Strand Hotel. 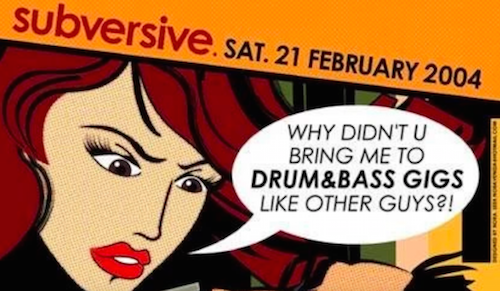 In Singapore, drum and bass was born from love, not business. In a country where the expansion of alternative music is often handicapped by a tiny population, a dominant commercial club culture, strict laws, and sky-high rents, drum and bass heads fought hard to promote the sound, regardless of its seemingly limited potential to turn profits. Against all those odds, DJs, promoters, and fans alike were united in their quest to listen to the tunes they loved—a mentality that infused gigs with warmth and community spirit, which set Singapore’s scene apart from other global drum and bass capitals.

During its roots in the 90s, drum and bass was as obscure as a genre could get in Singapore, but a handful of pioneers managed to turn a frenetic oddity into a fully formed movement that has endured for over two decades now, silencing claims that the squeaky-clean island nation wasn’t capable of producing gritty subcultures.

As is the case with much of Singapore’s electronic music history, the roots of drum and bass can be traced to Zouk, one of the island’s oldest and most influential nightclubs. In 1996, five years after first opening, the venue launched Phuture, a smaller room that targeted experimental sounds to offset the club’s more traditional house and techno fare. [Read more…]