In an obituary written at the passing of Malaysian playwright and actor, Jit Murad in February 2022, theater activist, Fasyali Fadzli gave an insight into the value of Jit Murad’s artistry. Fasyali noted that Jit’s genius as an artist lay in his ability and intelligence to use comedy to expose the hypocrisy and social flaws of urban society. Notably, Fasyali felt that Jit had the  daring to explore a diversity of taboo questions specifically in relation to the Malay community in Malaysia.

Aside from showcasing Jit’s talent, this film is also a reminder of the effect of film censorship. Spilt Gravy was completed around 2012 and in the same year, the producers submitted an application to the Malaysian Film Censorship Board (Lembaga Penapisan Film, LPF). However, the film was deemed not suitable for widespread screening. The producers did not give up, but resubmitted various versions for evaluation by the LPF. In March 2020, the film was finally approved and received a PG-13 classification. Now, with cinemas in the country finally open fully as the country enters the endemic phase of Covid 19, the public finally has the opportunity to enjoy Spilt Gravy.

According to the producers, the differences between the latest and original versions are very few and it involves, among other things, removed curse words, as well as an alternative ending. But the 10-year wait is nonetheless a long one, and the circumstances surrounding Spilt Gravy can be seen as a classic story of film censorship problems in Malaysia.

Spilt Gravy gives us the opportunity to see the turmoil of middle-class Malay life in Kuala Lumpur, which is highlighted through a dysfunctional family, led by Bapak and his 5 children. Jit, together with Zahim and June Tan managed to adapt Jit’s original playscript carefully and smoothly. Zahim’s directorial command can be observed through the way he provides balance in every character that emerges. It’s not an easy job to attain acting coherence in a film that involves many characters from different background. Zahim manages this smoothly, giving the audience the opportunity to deepen our understanding, and get into each character.

Bapak, (Rahim Razali) is a Western-educated polygamist, a broad-minded former journalist who loves to read. He is also a charming man ladies man. Even so, Bapak remains steadfast in his faith, and his Malay cultural customs. This is shown through his earnestness in waking up in the morning to pray, and in his knowledge about traditional Malay cuisine. 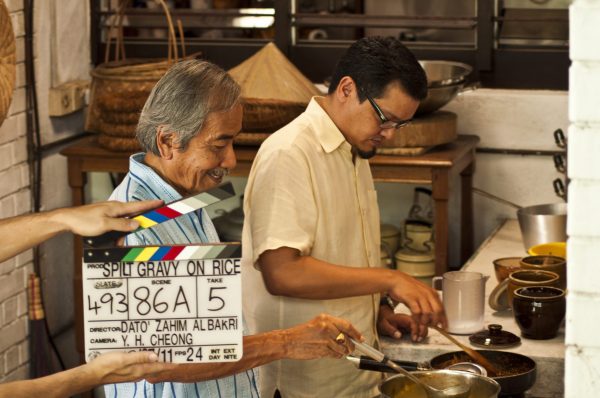 Bapak experiences loneliness and solitude, often recalling memories and past recollections that he finds hard to forget. It is as if he is stuck in the past, reliving his youthful glory days and the excitement of his life then. In his old age, he is kept company by his son Darwis, (Na’a Murad), who has always felt sidelined, and still bears the hurt and disappointment over a childhood birthday cake incident. Darwis acts as an intermediary between Bapak and his other children. He is an English lecturer whose life is shown to be empty and desolate. Compared to his polygamous father and who recalls the  death of his beloved wife, Darwis instead has a failed marriage and his life revolves around work.

Zak (Zahim Albakri) is the eldest child, but his life is aimless and plagued by drugs. Zak is seen as the black sheep of the family, often shown asking his other siblings for money. Kalsom (Bernice Chauly) is an art activist who is involved in theatre, and is trying to make her own film. She is committed to women’s issues, and her works attempt to explore feminism. Yet, a dilemma arises in the film which makes us question Kalsom’s grasp of the issues she explores in her film, and to wonder if she herself is caught in suspicion and confusion.

We also meet another son, Husni (Sean Ghazi), who is successful in his career, yet has a hidden side of life. Husni has a close relationship with her sister, Zaitun (Juliana Ibrahim) who is a spoiled woman who does nothing in life, other than spending time at spas and shopping malls. Despite her lack of activities, Zaitun does not spend enough time with her children and husband. 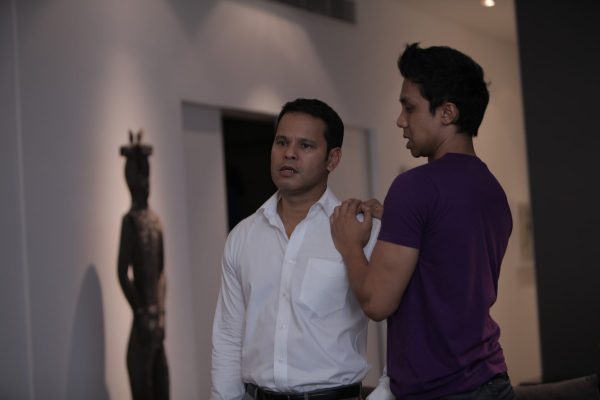 The film’s strong theatrical element is evident in the acting techniques and scene formations and its strength also comes from the dialogue. Although the visuals featured are minimal, they  are effective in presenting each scene. Many scenes leave a lasting impression. For example, when Zak disrupts the Kalsom’s preview session, the two ‘angels’ (Jit Murad and Harith Iskander) who get off the express rail link on their way to collect Bapak’s soul, and the final scene, where each of the siblings are possessed by Bapak’s spirit, allowing each of them to fully comprehend their life and their father’s legacy.

Spilt Gravy is an emotional work. It also has a somewhat fragmented storyline, and a chaotic structure that is embodied through each character. Yet, it has a meaningful message. The film is in fact, a powerful slap that lands on the cheeks of the middle-class Malay community which live in uncertainty and sometimes forgets their original identity and nature, as attested to by Amerul Affendi’s character, who screams about “Melayu Sesat”. Nam Ron’s character too, who was involved in the bloody May 13 tragedy, and who later inflicts life-long trauma on Zak, are powerful critiques of society raised in the film.

Zahim and all those involved in this film have managed to make the 10-year wait worthwhile. We were entertained by Spilt Gravy and it stole our hearts with its combination of comedy and tragedy. While it is a modest film, it will surely be remembered as one of Malaysia’s most important films. Despite all the chaos that this film has gone through, love is ahead, so much so that even the angels postponed their work to give us a chance to witness the staging of a (Malaysian) family.

This review was originally written in Malay and translated into English by ArtsEquator.

Showtimes for this film can be viewed here.

3 thoughts on “Where Flows Blessings But To The Heart”