“In order to change people’s minds, you have to break their hearts”. So said Reverend Miak Siew at O.P.E.N’s curtain raiser, Art as Res Publicae.

Unfortunately, there was never any danger of broken hearts. Art as Res Publicae, conceived by O.P.E.N Director Noorlinah Mohamed and SIFA Artistic Director Ong Keng Sen, was framed as a historical event where 50 individuals from diverse backgrounds would be schooled in methods of deliberation and collaborative decision making and have, “for the first time, a dialogue in the open“. What unfolded was a tightly choreographed event that appeared to view the activity of changing minds as a unilateral one – not so much to have one’s mind changed, as to change the mind of others.

The evening opened with an excerpt of Eleanor Wong’s Wills and Secession (1995) read by Claire Wong and Tan Kheng Hua playing sisters, Ellen, a gay lawyer and Grace, a missionary’s wife. The reading was a prompt for five commentators to reflect on the evening’s topic, “Some complexities surrounding pluralism in Singapore”. (The next night, 29th June, a second session explored aged care in Singapore, with DEMENTIA by Proton Teater as the prompt).

Rev. Miak Siew spoke of the early church’s dual role of art patron and censor, and urged engagement with, rather than reaction to, works of arts deemed offensive. Choo Zhen Xi, lawyer and the founder of The Online Citizen, noted that artists change more minds than lawyers did. Arts’ ability to resurrect the ordinariness in the other, thereby returning it to parity, was the central idea in curator Dr June Yap’s reflection. Writer Alfian Saat challenged the notion of common spaces with a call for uncommon spaces where “norms are suspended”. Traditional wisdom, which valued the heart leading the head, could be a pathway towards compassion rather than conflict, argued Imran Taib, an interfaith activist.

Cultural anthropologist Dr Ad Maulod broke the binaries of oppressor and oppressed, arguing that we need to “find spaces where oppression and privilege both interact and intersect”. He also posed perhaps the most provocative question of the evening, “What does conservative art look like?” Dr Ad’s question troubled the very framing of the event: the persistent hitching of the arts as a space for social change and mediating difference, to an exclusively progressive agenda. Worldwide, right wing movements have used methods and tools previously monopolized by the left, to world-changing effect. There are already conservative groups staging performance art and films for ideological gain. These may be accurately dismissed as propagandistic, ‘bad’ art, but they still resonate, as art can, with an invested constituency.

Unfortunately, the question went nowhere, beyond a comment about the incoming SIFA Artistic Director, from an audience member, which met with derisive laughter. The response hinted at blind spots when like talks with like. The organisers had invited those with different views to participate, but none accepted. So, while all five commentators broadened and deepened our understanding of the intangible value of the arts in a plural society, it was like watching a one-sided match. We were awed by the skills on the field, reassured that we were on the winning side, maybe even memorized some moves for the next time we had to play defense. When everyone is batting for the same side however, we never get to see the opponent’s best moves, there is no danger in conceding a point, no prospect of heartbreak. Nor do we have the chance of a convincing victory. 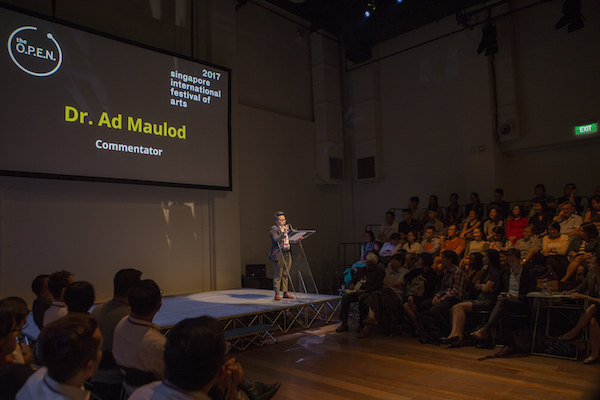 The unwillingness of the right to engage in open dialogue is not surprising, given the characteristically opaque identities and methods of our detractors. But perhaps the field, tilted to the left, already doomed the evening. This was, after all the opening of the arts community’s big tent event of the year. In the arts, we’re attuned to the symbolic power of spaces, which, despite the best efforts and the purest of intentions, may appear to the other side as less safe space and more lion’s den.

The most confounding moment of the evening however was not the absence of dissenting voices, which was outside the control of the organisers. It came just as a Q&A with the 5 commentators began to take off. A list, “made up of statements found in the play Wills and Secession as well as those published in print or online”[1] was presented to the 50 discussants. They were broken up into smaller groups to vote on the one they felt was most contentious. The audience of 400 was told to vacate the room for 45 minutes while the groups convened in private. The event was built around the 50 discussants, who had undergone workshops on “collaborative and deliberation techniques as well as etiquette and the ethics of public discussion”. Why was the deliberative processes hidden from public view? Haven’t we had enough of secret committees? 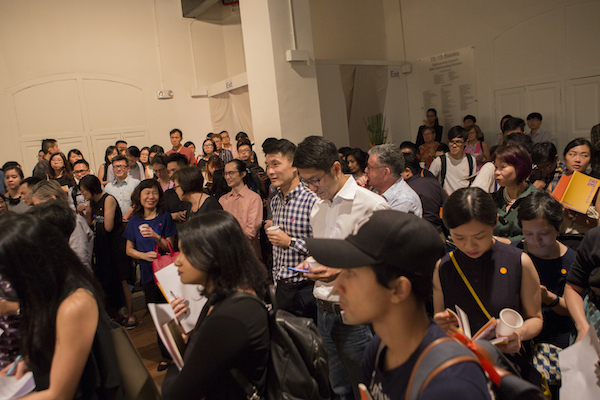 Instead of witnessing the groups engage in (presumably) robust debate using the skills attained from their two workshops, we returned to six representatives who summarized the deliberations and announced each group’s choice, no different from your run of the mill workshop or class project. The top choice was a statement advocating shooting homosexuals, the second accused Christians of being power hungry and malicious. Neither statement was from the play. The first was a social media post by Bryan Lim in response to Pink Dot 2016, for which he was fined.  The second was from Amos Yee’s infamous rant on YouTube,  which earned the teenager four weeks in jail and sustained public scrutiny, if not outright hostility. The exercise highlighted the gap between the 50 discussants’ views and that of the authorities. It was not a startling outcome, by any measure.

The evening ended with a Closing Coda, delivered by the respected theatre educator and Cultural Medallion winner, T Sasitharan. He began by calling out “the elephant in the room”, that being our colluding voices in the absence of different points of views. There may have been an ordained preacher in the room, but Sasitharan’s denouncement, delivered with rhetorical force, won hands down, earning cheers from the audience. There was not a single utterance by Sasitharan that I disagreed with. Yet, the Coda felt deeply misplaced. Rather than allowing a free flow of ideas and comments from the many there, a figure of authority (in the arts) spoke for us.

This final act highlighted the top-down quality of the entire evening, and left me wondering, if we were in a manufactured performance of a discussion rather than an actual discussion. In advocating for open spaces and a dethroning of controls that constrict discussion, actions, rather than words would have spoken louder.

“Spectators in the Spotlight” by Akshita Nanda (Straits Times)

ART AS RES PUBLICAE  was held on 28th and 29th June 2017, under the Singapore International Festival of the Arts’ O.P.E.N Program.  The review above is of the session held on 28th June, with the topic,  “Some Complexities Surrounding Pluralism in Singapore”. The second night’s topic was “Singapore’s Future of Care in Aging: Long Term Care, Quality, Well-being and Dignity”. The Singapore International Festival of the Arts runs from 28 June – 9 September 2017. For full program information, go here.