I have vivid memories of the movie theaters that once peppered the streets of downtown Philadelphia. They were a key part of my childhood. The films that my parents took me to see in them blur with memories of the city into a vision of childhood that now seems otherworldly.

My mother, wholesome and nourishing as she was, mostly took me to see kids movies and the occasional light comedy. My father was less concerned whether the movies I watched were age appropriate or not. Trips to the cinema with Dad were dominated by horror and action films, which by the early 1980’s had reached all new levels of gore and violence. Return of the Living Dead, for one, holds the memorable distinction of being the first film that ever caused me to jump out of my seat, when, in an early scene, a recently resurrected zombie burst through a door in a medical supply warehouse to the cry of “brains!”

Homeward strolls through the city streets after such jolting fare were notable for the thoughtful, albeit funny analyses Dad would give for what we had just watched. They were great walks.

By the time I had reached adulthood, those theaters had all closed down, leaving the city a veritable cinema desert. The only form of recreation that seemed to be available was found in bars. Bars, bars, gastropubs and more bars, and restaurants that I could ill afford. As a young man I often thought back to those street side sanctuaries where I got my kicks as a kid. Why had the heart of my corner of civilization not retained so much as one of its old movie theaters, if only as an alternative to bar culture?

After I moved to Chiang Mai, Thailand for graduate school in 2006, my penchant for movie going resumed. At the time, the two main movie venues were both multiplex theaters on the top floors of shopping malls, an arrangement which did little to inspire me, but satisfied my love of film all the same.

When one day I accidentally stumbled upon an old stand-alone movie theater in a hitherto unknown part of town, I was instantly awakened to a whole new aspect of the city. Though shabby and slightly intimidating, the cinema that stood before me beckoned further investigation. I mentioned this to a few friends who all agree that a future visit was a must.

I returned several months later only to find a pile of rubble where the theater had stood. It had been demolished, destroying with it my hopes for a movie theater adventure. That lone act of destruction set the stage for the next 8 years. If this theater’s loss was indicative of the state of stand-alone movie theaters across Thailand, I reasoned, then it would be worthwhile to document these structures while some of them were still around. In the back of my mind, abetting my decision, were the lost downtown movie theaters of my youth in Philadelphia. With fixed determination, I set out with camera in tow to document as many of these buildings across the region as I could.

From Thailand, I have expanded the scope of the project into Myanmar and Laos, setting a long term goal of documenting all existing stand-alone theaters in Southeast Asia.

I try to capture everything I can, from the grandest to the most mundane; crumbling and abandoned or full of life. My work is to re-expose these often forgotten structures to new generations of Southeast Asians, with the hope that somebody, someday might feel inspired to resurrect one.

But if not, at least there will be an accessible record of their existence for one and all to see. 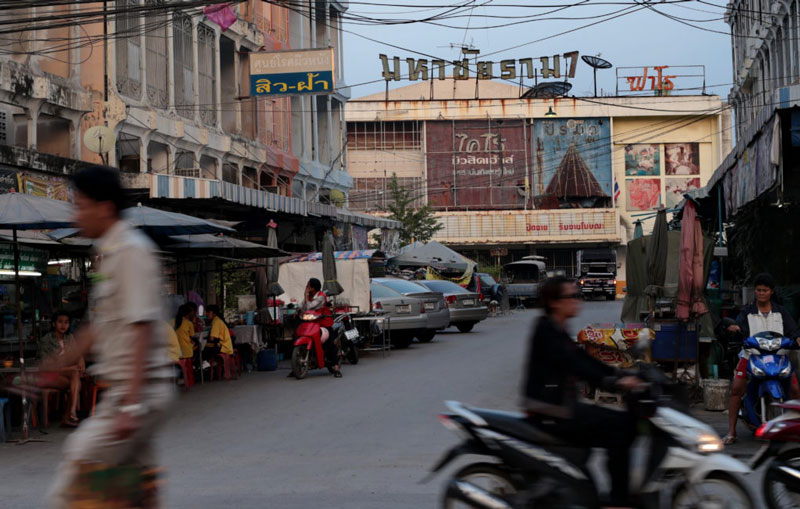 A great part of my love of stand-alone movie theaters has to do with their connection to the street. The architecture of these buildings was designed to communicate the romance and escape that waited just beyond the ticket window. Their glowing signage and marquees enliven the democratic space of city streets. This shot of the Mahachai Rama in Mahachai City, Samut Sakon Province, Thailand demonstrates the visual connection between street and theater. The allure of imagination and escape is beckoned by the theater, which forms a terminated vista at the end of one of the city’s busiest sections. When the theater was still in operation, this must have been quite a sight. 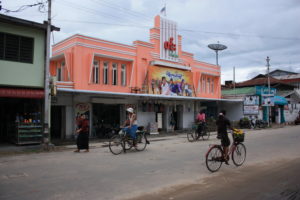 Built in 1961, the year before the military seized power in Burma – thereafter nationalizing all the movie theaters nationwide – the Win Cinema is a classic of Tropical Art Deco theater architecture. Though its façade is made of concrete, the interior of the theater is almost completely made of wood, including the seating. It was demolished in 2012. 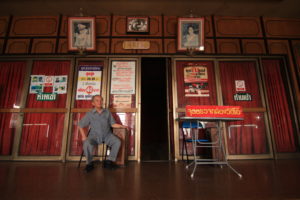 While the vast majority of theaters I’ve documented in Thailand are now abandoned, there were a handful still in operation, allowing me the chance to record the life of the building while it was happening. The ticket taker at the Nakon Non Rama in Nonthaburi, Thailand had been working this job for three decades, reflecting the old fashioned, pre-corporate business model found in the Thai movie theater industry. It was a family affair, and employees often held a job for life. Sadly this man lost his job two years later when the building was demolished to make way for a condo tower. The Nakorn Non Rama was the last operating double-feature theater in Thailand at the time of its closing in 2013. 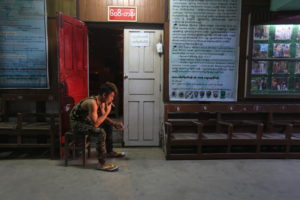 In contrast to Thailand, where stand-alone movie theaters are nearly extinct as business type, Myanmar still has a number of them. The casual nature of these old family enterprises is reflected in this shot of the ticket taker at the Win Cinema, who is enjoying a smoke and surfing the net while awaiting patrons. Ironically, smartphones will ultimately be one of the new technologies that will likely undermine the stand-alone movie theater in Myanmar. 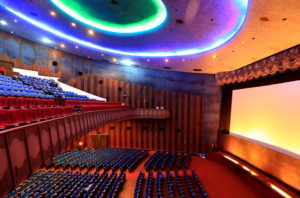 Of all the active stand-alone movie theaters in Myanmar, none is more spectacular than the Thamada Cinema. Thamada translates to “President” in English. In 1960, when the Thamada burst into the ranks of Yangon’s movie theater elite, a name like that would have held a certain amount of political zeal. Things were looking promising after the casting off of more than sixty years of humiliating British-colonial rule. Myanmar, then Burma, was coming out of World War II badly damaged, but ready to move forward. Hopes were high that the country would enter the world stage, find its wings and soar to new heights via state-driven industrialization policies, the likes of which were being pursued across post-colonial Southeast Asia. A building like the Thamada, then, embodied the spirit of the times. This was the new Burma, after all, not the medieval one, nor the one subdued by foreign powers. The nation’s capital yearned for a movie theater which could represent the progressive outlook of a burgeoning democracy. Sleek international style architecture was employed to achieve this end. To this day the Thamada is in pristine condition, entertaining loyal crowds on a daily basis. 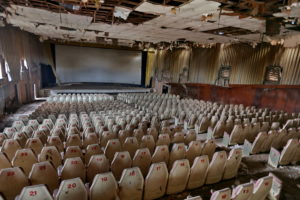 Like many small town Thai movie theater, the Petch Siam has been left to rot for the past 2 decades, a ghostly reminder of a time when the movie theater was the central gathering point of the community. Most of Thailand’s abandoned theaters have been completely gutted, leaving only a hollow square room with little else to indicate their past splendor. The Petch Siam was one of the rare theaters I’ve encountered that had all its parts. 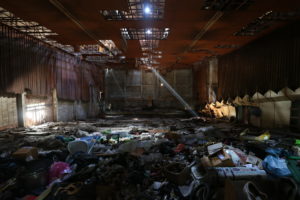 At the most extreme of Thai theater decay are places like the Sri Burapha Theater, which have not only been abandoned, but turned into garbage dumps. Over two decades of vandalism and neglect have left it a complete ruin. Towards the front left of the auditorium, a lone seat remains. 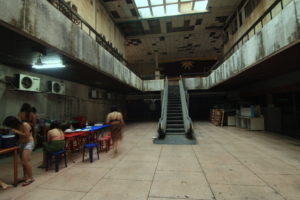 Some of the theaters I’ve encountered have been informally coopted by subaltern groups. Probably the most interesting adaptation from a visual perspective is the Oscar Theater. Once one of Bangkok’s premiere movie destinations, after it closed a section of its lobby was used as a cafeteria for sex workers employed in nearby massage parlors. The contrast of faded grandeur and the sex industry is stark. 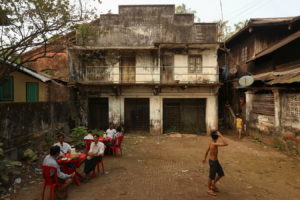 Despite being out of business for nearly 30 years, the Aung Theit Hti Cinema still serves a social function of sorts. Its original brick patio hosts tea drinkers as a tea shop proprietor sets up tables there every evening. My request to enter the building was granted, though a local informed me that a giant cobra lived inside. Whether that was true or not I’ll never know. It was enough of a deterrent from entering. 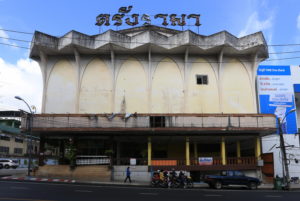 One of numerous grand old theaters across Thailand, sitting empty and lifeless, yet telling a story of Thai cities from yesteryear. A minutia of hope lingers in my heart that someday some of these buildings will be returned to life in one capacity or another, and contribute to the cultural life of the cities they stand in like they had for so many decades before.