“People always see us artists as cool. They think we paint on the streets, make big money, no need to study one. Ask them to try lah! We work for hours in the hot sun. And you need strong fingers to hold the can.”

Artist ANTZ was working on a boom lift on the side wall of Aliwal Arts Centre when ArtsEquator visited him. The machine lifted him up aloft, his bright hi-vis safety harness shrinking in size as he made preparatory markings on the wall, roughly 9 metres off the ground.

ArtsEquator was interviewing him about Mixtape, a giant mural that involves a collaboration with at least eight urban artists from RSCLS, 67 Studio and The Blackbook Studio. This work combines art with music and technology, with QR codes you can scan to access a curated playlist of songs. The work is part of Aliwal Tracks, an online programme of performances, music as well as street art organised by Aliwal Arts Centre.

On the far side of the wall, away from the road and near the ground, the name “Isabel” is scrawled in a nondescript manner. This is a practice tag left by Isabel Lim, a young artist who will be working on a large public wall for the first time. The 19-year-old aspiring street artist won the ALIWALL Competition, giving her the opportunity to paint on the lower part of the wall and be a part of Mixtape.

“I’ve never done graffiti. ANTZ brought me around, and we looked at all the murals in this area. After that, we came back and he was like, try this. It’s not the best, but it’s super fun. And I’m willing to get better,” she says of her first time using a spray can to paint.

ArtsEquator spoke to ANTZ and Isabel in the early days of the project, posing similar questions to the two artists who are two decades apart in age. The differences in their answers are revealing – for example, while ANTZ recalled showing his physical portfolio to clients in the early 2000s, the current generation of artists have digital tools like Procreate, and social media and the internet to help with visibility and access to opportunity. Their different experiences also reflect the development of the street art scene in Singapore, signalling a change in public attitudes as street art becomes part of contemporary urban culture and a respected artform in itself.

[The interview below has been lightly edited]

Please introduce yourself in your own words.

ANTZ: I go by the name of ANTZ. I’m from a crew called RSCLS. I’ve been painting for 15, 16 years – legally, illegally. I’m a graphic designer in a small company by day. I won’t call myself a street artist. We call ourselves urban artists, because we don’t just do art on the streets. We do sculptures, art installations, street art, graffiti, mural painting.

Isabel: My name is Isabel, I’m 19 this year. I study in NAFA. I’m from Malaysia. I love art. I’ve always loved art. And I’m truly inspired by the art around us. Generally, anything around you can inspire you to make something, do something to motivate you.

How would you describe your own style or the themes that you like to work on?

ANTZ: For myself, I specialise in Chinese/oriental mythology. A lot of crazy research on folklore. For example, the Monkey King from the Journey to the West. Most of my work are based on these monkeys. One of my first illegal tags was “Monkeycrapshit”. “MCS” for short. The name ANTZ came about when I was out in the public already, and there’s no way to hide. It comes from my own name, Anthony.

Isabel: I like to pay attention to details. And I love colour. I get really inspired by the colours around me. I also like the Japanese culture. And Italian and French architecture specifically – their attention to detail is what really captivates me. 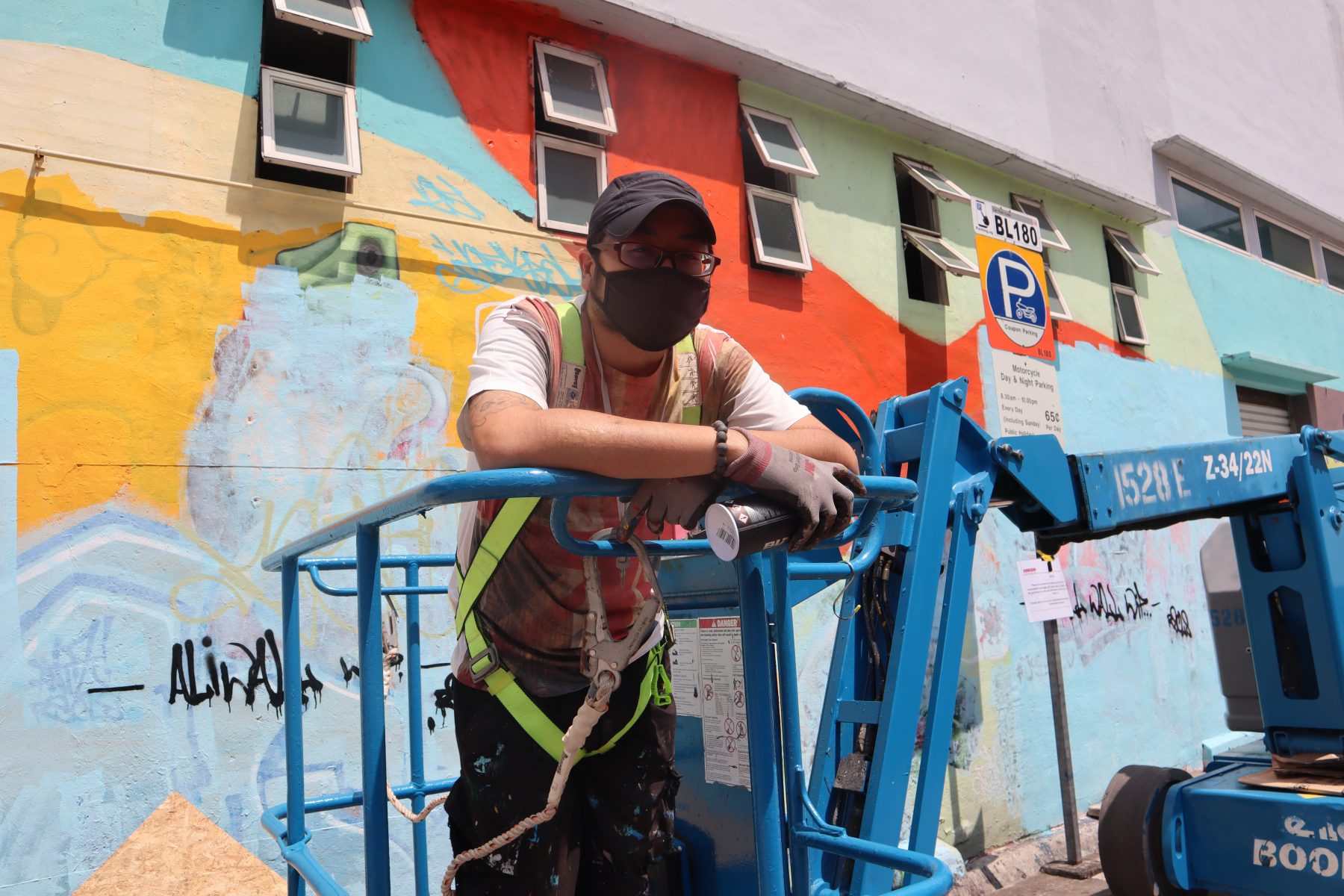 ANTZ preparing to go up in the boom lift. Image: Denise Dolendo for ArtsEquator

How did your friends and family respond to your artistic inclinations when you first started out?

ANTZ: Obviously my family didn’t allow it, because my late dad was a cop. They only found out after I got arrested and I appeared on the news. Then the whole nation knew. Then okay lor, they accepted the fact. That’s when I went with ANTZ.

My peers in school were all super against me being a graffiti artist. We were all trained to be animators, designers, web designers. Doing things out of the norm was a big no-no. My childhood friends were like “yeah man, finally you’re doing the real shit”. I’ve been doodling on the streets for a very, very long time – before spray cans. I’d use markers and stuff, so from their point of view, I had gone professional.

Isabel: Since I was young, my parents have always known that I had a particular interest in art. They’ve always been very supportive. They’re always like, “do what makes you feel happy”. So I’ve always had that thought in my mind. It was very smooth sailing.

I’ve always been a big arts person back in school. We had Sports Day boards to support our houses. So I would do that. For musicals, I would do the props. We had some walls as well. I would paint the walls. 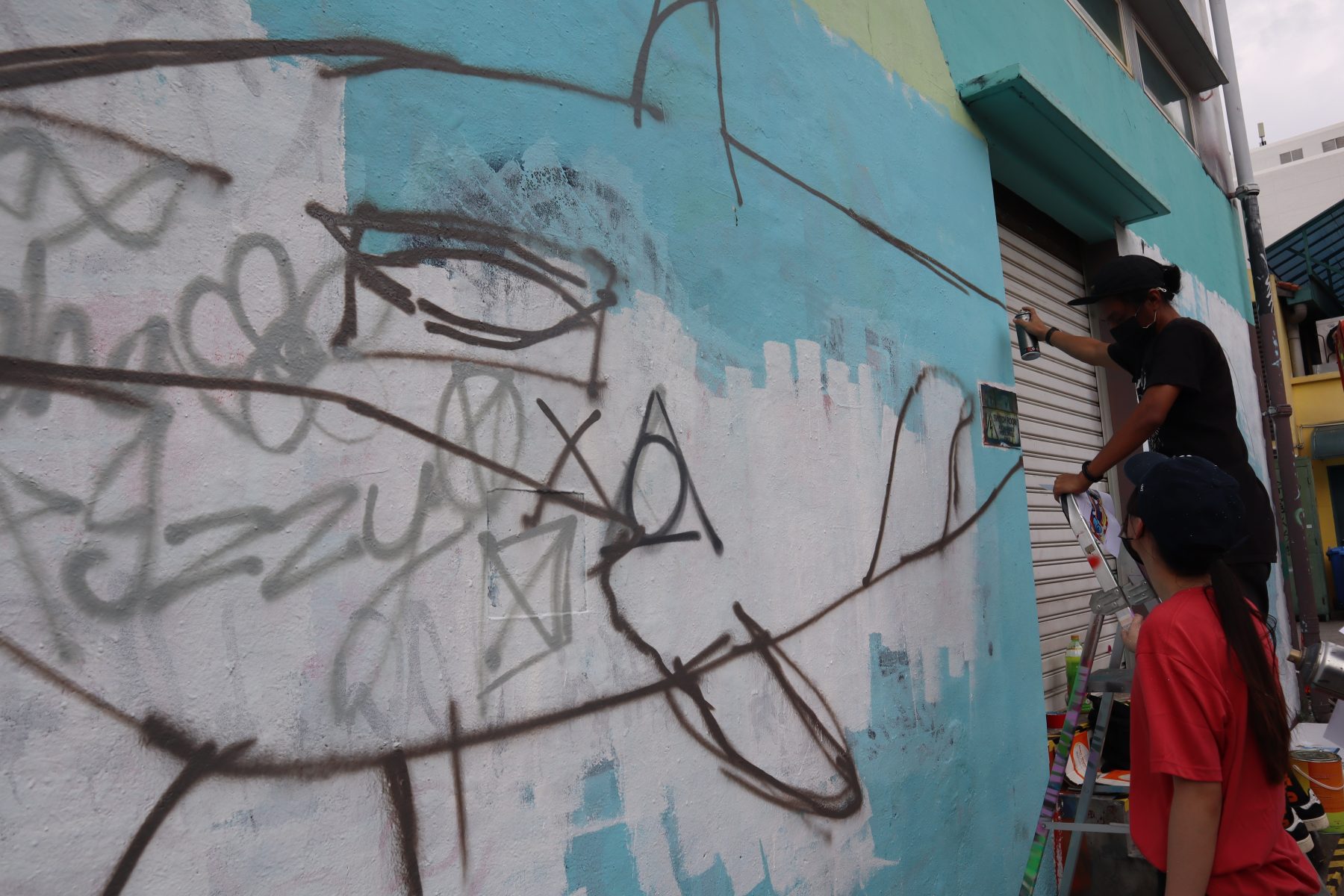 What was the first work that you did that was significant for you?

ANTZ: Having Adidas endorse my crew was like a milestone for me. We were given tons of merchandise. We were painting at different live events. That was a turning point, like “hey, I actually can make a decent living out of this. I’m not painting illegally for free anymore. There’s earnings to be made”. Not every day is Sunday, but it’s something that we can explore and to push our craft to the next level.

Seriously, before that I was just like any Tom, Dick, Harry – just a young kid painting on the streets. We didn’t really care that much about our own future or career. It was me and ZERO just hanging out in Arab Street, chilling and doing nothing, so we took a spray can and started painting. We started bombing around the streets. No goal, no mission, we just wanted to paint. Then we had friends coming to us, people gave us commissions, and we grew from there.

Isabel: My grandparents live in the US, and what I wanted to do was to have a piece of me in their home. There’s this particular Bible verse my grandfather likes, about how a deer is panting for the love of God. So I drew a big deer on a canvas, and I put it on the wall. That was something that meant a lot to me. When I get on a call with them, it’s there in the background.

What’s your pet peeve when it comes to street art?

ANTZ: People who don’t really understand and they make really mean comments. Once I was painting with Speak Cryptic on a boom lift at the Singapore Art Museum. A family came, and in front of us, the parents told their kid, “boy, if you don’t study hard, you’ll end up like them”. Yeah, it happens. Not once but a few times.

We also do workshops in schools. I did one with ZERO and the teacher started to introduce us like, “Hey guys, these are street artists. If you don’t do well in school, you can consider going into this career”. I was fine, because it was true for me, but Zul has a degree and a Masters. He was really offended, so he started talking to the class about his studies, basically (countering) what the teacher said. It’s the mentality that annoys us. If you don’t know shit, don’t talk about it. Don’t like it? Move on.

I’m glad that times have changed. We have done our job in educating the public. Festivals help change mindsets. So things are different right now.

Isabel: I’m a very open person. I will accept whatever you have to say. And I’m not the kind of person that would judge. My friends are also very open, so I don’t feel like there’s any kind of tension. 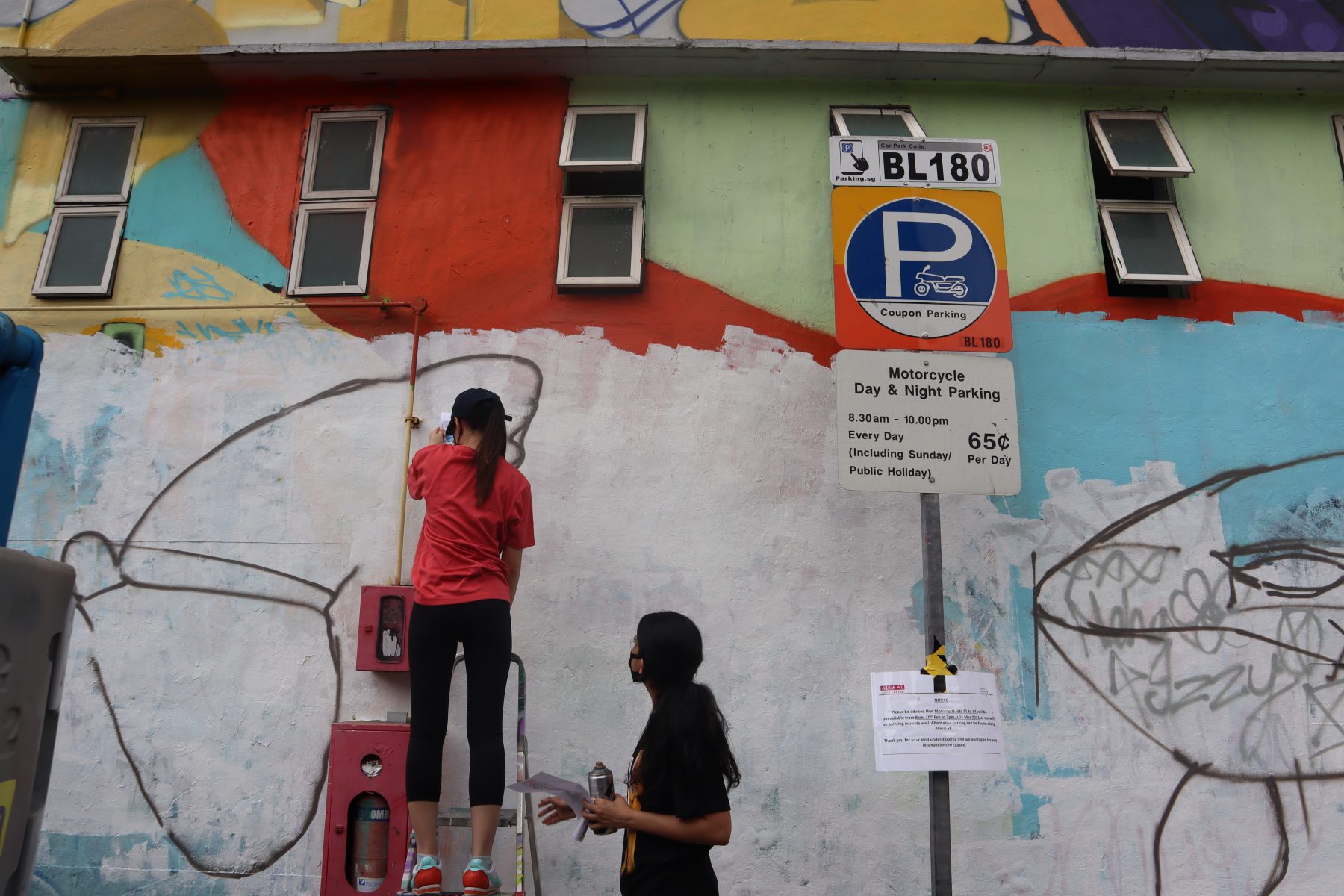 Isabel works with the spray can as her friend Neha looks on. Image: Denise Dolendo for ArtsEquator

Since Mixtape is also about sounds, what’s your favourite sound in the world and why?

ANTZ: My daughter calling me “Papa”. She’s four. Regardless of how crazy your day is, or if things are not going well, when you go to school and she just looks at you at the window and says “Papa”. Then “ok lah, worth it lah – wear your shoes and let’s go home.” It’s a new sound for me. I’m still adapting, but it’s quite cool.

Isabel: There are two particular ones. One is the ocean – very clichéd – because it reminds me of family. I’m a very family-oriented person, and we like to go to the beach. My cousins and I would just hang out by the shore, with giggles, the sound of waves hitting the shore. I always associate that with family. The second one would probably be the rainforest, because I’m also very adventurous. I like to jungle trek and stuff like that. The crickets, the smell. Love it.

Can you name one artist who you’re inspired by and why?

ANTZ: The first artist that got me going is Jamie Hewlett, the artist for Gorillaz. He made me realise that it’s possible to put 2D characters in a 3D environment. And how you can build a music band without actual band members. This opened me up. I am heavily inspired by his stuff. And I moved on from there with lots of Chinese mythology, research and stuff to adapt my own style and slowly evolve.

Isabel: I have two. One’s my grandma, who was an art teacher back in the day. She’s always been there to teach me, motivate me. Whenever she’s back, she would look at art and talk to me about it. She really inspires me. And the second would be Antoni Gaudí. I would consider him an architect and an artist. His buildings are very interesting – the shapes, the forms, the colours. They’re really captivating.

What’s your philosophy when it comes to art?

ANTZ: Explore. Open your mind, open your eyes, open your heart to really accept and learn. Unlearn yourself to relearn again. That’s my personal philosophy lah. Basically learn to collaborate, learn to accept. When people tell you your work sucks, you need to ask yourself why. Try to understand, “is it his problem, or is it my problem?”. I can’t please everybody, so just chill and tell myself to be a better me in the next piece, be it in terms of time or technical skills or concept.

Isabel: I believe that art is meant to be shared. So for later and over the week, I’ve invited my friends over to hang out with me while I paint. I like the fact that art can be a solo activity, yet it can be shared. 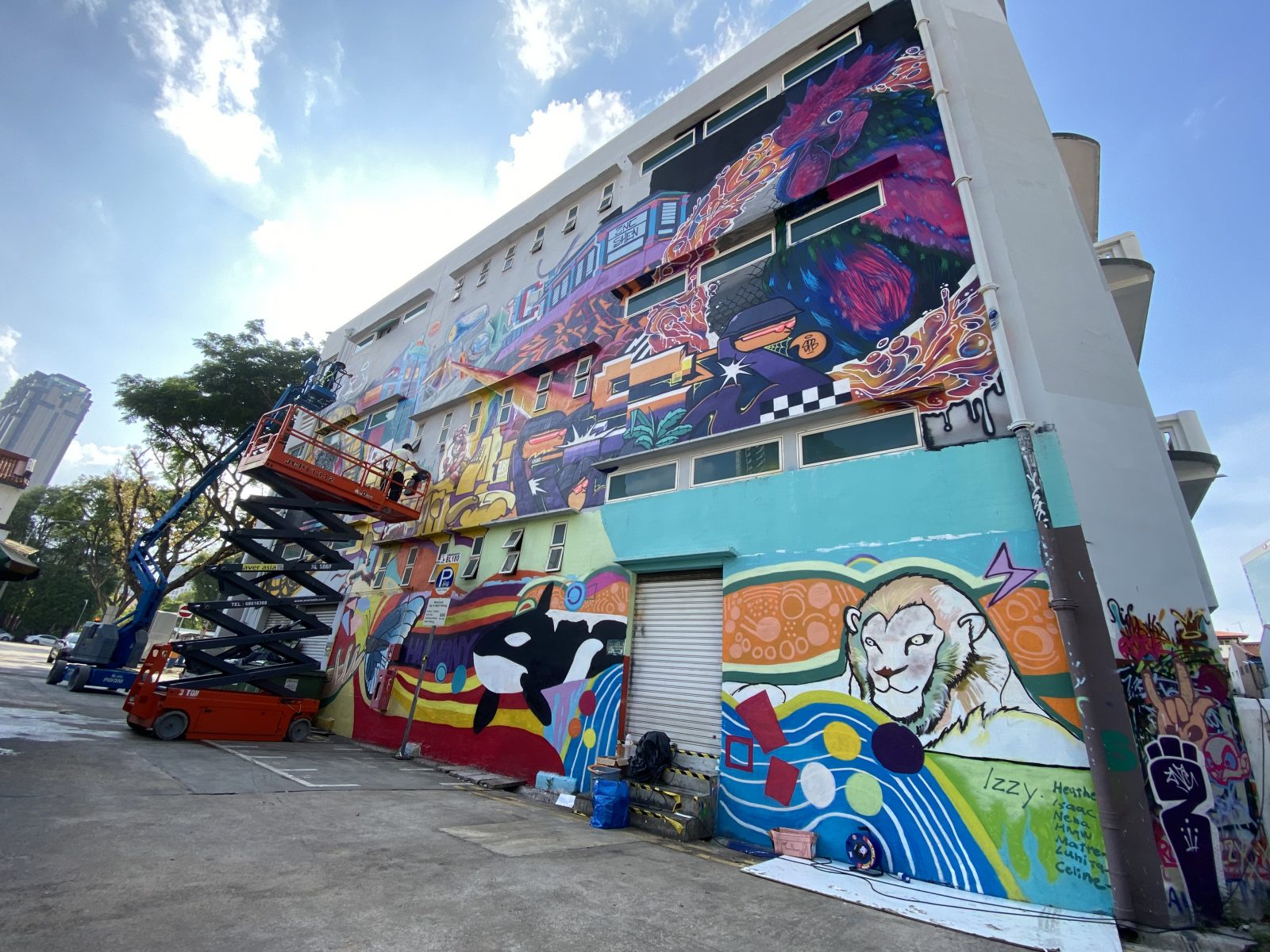 A view of Mixtape as of 10 March 2021. Image courtesy of Aliwal Arts Centre.

Mixtape is accessible from now, though it may evolve due to the transient nature of urban art. It is located at the side wall of Aliwal Arts Centre.

Aliwal Tracks runs till March 2021. Check out all other programmes here.