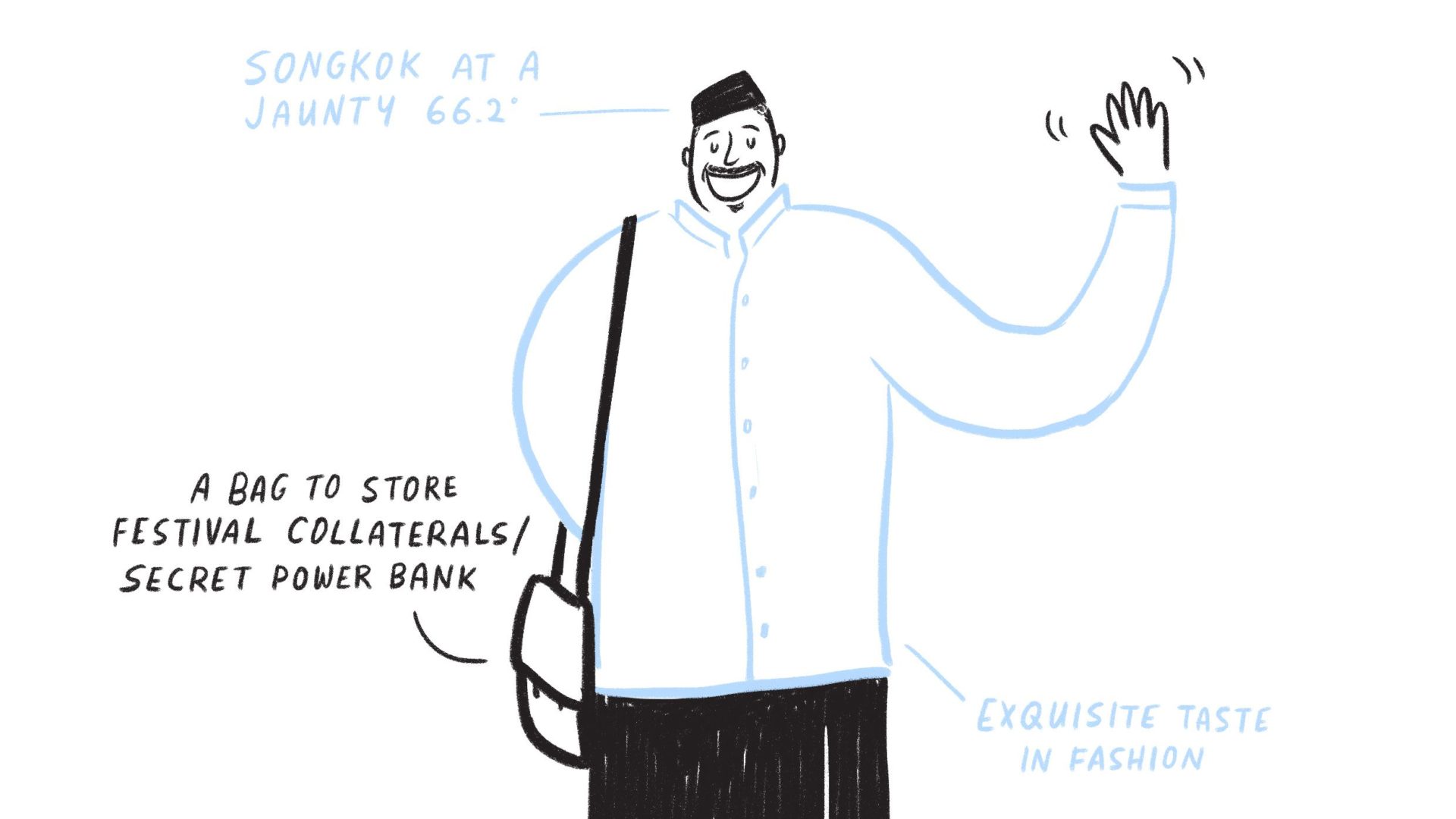 Illustration of Joe Sidek by Jackie Goh of The Fingersmith Letterpress
November 21, 2018

Joe Sidek will not be cowed. “Everyone thinks I’m down and depressed. I’m fine!”

It’s been a challenging year for the founder of the George Town Festival. In the foreground: the removal and public backlash following the censorship of Moorayameen Mohamad’s photo exhibition, Stripes and Strokes, at this year’s GTF opening. In the background, a damaging report by the Auditor General critical of George Town World Heritage Incorporated (GTWHI) that alleged lack of transparency and accountability in the awarding and running of the festival to Joe Sidek Productions. (Read GTWHI’s response here.)

But Joe, an outsized personality by any standards, relishes his outsider, underdog status. “It was challenging, but not difficult. With my personality, well, challenges push me.”

On the censorship of Stripes and Strokes

“I loved that people asked me to remove their portraits in solidarity,” he says, in reference to several who requested their photos removed from Stripes and Strokes after LGBTQ activists, Pang Khee Teik and Nisha Ayub’s portraits were removed by the Festival on the instructions of the PM’s department. “Two weeks later, GTF programmed Singing to the Lions, featuring school children from five high needs schools, that dealt with bullying and discussed homophobia. It was handled so well, yet here we are, as a nation, unable to handle the subject. There are contradictions in the festival, and the festival allows people from different layers to take things from it.”

Joe Sidek has become synonymous not only with the festival that he runs under his company, Joe Sidek Productions, but with George Town itself. His is the face that has graced articles in the most prestigious publications internationally, selling this UNESCO World Heritage Site, Malaysia, and indeed, Southeast Asia. His indefatigable energy has taken GTF from a one-off celebration of the UNESCO listing, to top ten lists of festivals and into academic case studies of successful creative placemaking.

But the festival is not without its critics. Unlike most other major festivals, Joe chooses not to set annual themes for his festival, leading some to say that GTF lacks artistic focus. “It depends on what your mission and journey is. Some festivals need a theme. I’ve never felt that one theme is more important than the other. Why restrict yourself? I’ve had shows that reflected community, realness – women, refugees, children – that don’t normally get programmed. Over the last 9 years, I’ve had programs that are so layered, and had a bit of everything for everyone. Festival Directors should be given freedom – and if they don’t deliver, sack them!”

Joe explains that different festivals have different roles – some are for audiences in the know, who are passionate about the arts, such as the Singapore International Festival of Arts under Ong Keng Sen from 2014 to 2017. There is “a certain percentage of the audience who do not like, know, or want to go near the arts. That’s the audience I want.”

“GTF is a good middle ground.” It also programs works for a more “passionate, high brow audiences,” with challenging international shows alongside its more accessible works, in an attempt to cater to different audiences.

Is that a problem though, pleasing such different audiences? “If the public feels it does not work, then it should be changed. They show that by not supporting the festival, not turning up. I personally feel that the public is for me. I feel that.”

“Being the Artistic Director is clearly part and parcel of being the middle man. I’ve had a really great nine years with the artists too. When creativity flourishes, it’s wonderful. I’ve learnt things I never thought about before. Moved to understand how performing or showing, from an audience’s and a performer/artist’s perspective, can move people. People’s lives change.”

Coming back to the AG’s report, Joe says, “The public perception was that I did not do my job well.” Explaining that Joe Sidek Productions was given a chance to present a response to the GTWHI Board, in which all the issues raised have been resolved and cleared, he says with some satisfaction, “I feel vindicated.”

Will Joe Sidek Productions be applying to run the festival again in 2019? Joe demurs from answering, although, one may read much into his declaration, “If somebody does not want to sleep with me, would I beg?”

He speaks, instead, of opportunities and future plans. “I get invited all over the world to talk about festivals and place making. Not by the state itself, though,” he adds ruefully. I turned down an offer to run a festival in Kunming, China, and another for a festival in Kuala Lumpur.” Joe Sidek Productions still runs the Rainforest Fringe Festival, launched in 2017, that is already getting positive press.

“A whole new generation without attachment to the arts is emerging. We have practitioners, but we have not built the audiences. I feel my job is not finished.”

“In the first few years, I was terrified. I didn’t see myself as a Festival Director and it was intimidating meeting other Festival Directors. I felt I was not good enough, that I needed to learn. Now, I feel ready to say that I am a Festival Director. I suddenly feel like I’ve passed school and I’m ready for the big league!”

“I’m ready to plan a new monumental festival, the Festival of Asia in Kuala Lumpur, sometime in late 2019. Perhaps it’s delusional.” Joe laughs at the audacity of the idea. “I want to give prominence to Asian arts forms. I want to push Malaysia out there.”

Kathy Rowland is the co-founder of ArtsEquator.com. She lives and works in Singapore.