Skip to content
It’s been more than six weeks since a video clip of a performance started circulating online in Malaysia. The ever widening fallout has just claimed its latest victim, with the lifetime ban on the co-owners of Crackhouse Comedy Club from owning business in Kuala Lumpur. Mira Sharon tracks the controversy through a timeline of key events - it's a long ride, so buckle up.

First, there was a video.

In July 2022, a video begins circulating in Malaysia. It features a clip of a young woman, on stage, dressed in a baju kurung and headscarf. The signage on the backdrop indicates she is a performer at The Crackhouse, a popular comedy club in Kuala Lumpur. She introduces herself as Siti Amira binti Abdullah, says she is Muslim and has memorised verses from the Holy Koran.Then, as part of her act, she proceeds to remove the baju kurung and headscarf, revealing a sleeveless top and a skirt beneath, as the crowd can be heard cheering and applauding.

Then, the video spread like wildfire across Malaysian social media

The video is uploaded on TikTok and triggers intense backlash. Many accuse it of being insulting to Islam. Across social media, including on Twitter and Facebook, comments and opinions ping pong between netizens, with some expressing distress over her disrespect for the religion, while others defend her right to freedom of expression.

In their first public statement on the matter, Crackhouse Comedy Club KL’s social media post distances the club from the clip, announcing that the performer and her partner were banned immediately following the performance. Crackhouse also says that it has lodged a police report against said individual. 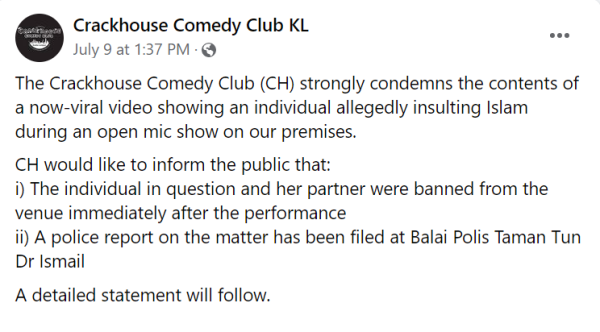 The performer, Siti Nuramira is arrested

Siti Nuramira Abdullah is arrested and charged under Section 298A of the Penal code for allegedly inciting hatred and promoting disunity. Her remand is extended till the 13th of July. The police also probe her under the Communications and Multimedia Act 1998 for abusing network applications. The viral video of her is investigated by the Federal Territories Islamic Religious Department (Jawi).

The Deputy Minister of Federal Territories announces that Crackhouse’s license is suspended, and the venue is temporarily shut in response to the contents of the video clip.

The boyfriend is next

Alex Chandran, Siti Nuramira’s boyfriend, is remanded by the Classified Criminal Investigation Unit of Bukit Aman till the 13th of July 2022. He is arrested for sharing offensive posts on his social media and for uploading inappropriate content onto his Youtube page on the 5th and 16th of June 2022.

New allegations about the performer and her partner emerge

Merdekarya – a popular venue that  promotes grassroots musicians – posts a Twitter thread claiming that Alex Chandran and his partner, Siti Nuramira have incited problems and behaved inappropriately towards customers at Merdekarya in the past, amongst other allegations.

DBKL (City Hall) seals Crackhouse’s premises. Well-known comedians Dr Jason Leong, Jo Kukathas and Harith Iskander, among others, come out to publicly defend Crackhouse. The sentiment is largely that the venue should not be punished for the actions of Siti Nuramira and Alex Chandran. Douglas Lim, another prominent comedian, states that he has performed, and been a patron of Crackhouse Comedy, saying “If any of you think Crackhouse is a breeding ground for such rude performances, it’s not.”.

Crackhouse issues a Press Release calling the performance  “an act of sabotage” and alleging that the performer and her partner had willfully disregarded the venue’s rules against touching on the royalty and on religious issues during performances. Crackhouse also announces that it has lodged a police report against the individuals concerned and urged “…the authorities to take stern action against the individual for any breach of the law, without penalising Crackhouse Comedy Club…”

Kuala Lumpur City Hall (DBKL) issues a show-cause letter of suspension to Crackhouse for having a restaurant license, but not the required entertainment license, to operate their venue.

It is reported that the Federal Territories Islamic Religious Department (Jawi) is also conducting an investigation into the incident.

Siti Nuramira Abdullah is charged in court for insulting Islam, while her boyfriend, Alexander Navin Vijayachandran,  is charged with uploading insulting content on social media.

Co-owner of Crackhouse Comedy gets arrested

The controversy puts Rizal Van Geyzel in the spotlight and a number of videos posted on his social media accounts are accused of being racially and religiously insensitive by netizens. He is arrested by authorities under Section 233 of the Communications and Multimedia Act (CMC) after several police reports are lodged against him for said videos.

Van Geyzel is released on bail after the investigation is concluded.

Siti Nuramira posts RM20,000 bail, having raised the money through crowdfunding. Donors included people from across the globe sympathetic to her situation.

Crackhouse’s sign board and entrance are vandalised with paint. Rizal Van Geyzel lodges a report following death threats against his family and himself, as a result of this controversy. He reports that his wife received threats containing profanities sent directly to her number.

Siti Nuramira is detained by The Federal Territory Islamic Religious Department (Jawi) right after posting bail at the Sessions Court.

Siti Nuramira is not charged in Syariah High Court

JAWI releases Siti Nuramira without charge, with the report stating that the Syariah prosecution did not proceed  as she was already being charged in the KL Sessions court for the same offense, which carries a heavier punishment than the Syariah court, if convicted.

Rizal is charged with “three counts of posting offensive content on his social media accounts” under the Communications and Multimedia Act (CMC) for three videos he had posted prior to the Siti Nuramira controversy. He pleads not guilty to all three counts for posting content deemed racially and religiously offensive online, and claims trial.

Crackhouse Comedy is blacklisted by DBKL

Prominent figures react to the shutdown

There is swift reaction from netizens, politicians, entertainers and others to the news. Shamaine Othman, a comedian who has also performed in Crackhouse expressed her sadness in a tweet, saying, “A home may be taken away from us but its spirit lives through the people who filled the space with joy and laughter,”.

Meanwhile, comedian Afdlin Shauki states that “The closure of the club is beyond my expertise. However, they (Crackhouse) have to deal with this situation they are in. If DBKL closes it on the grounds of improper licensing, they have to accept it.”

In response to the ban, the co-owners of the comedy club demand an explanation from DBKL for the permanent blacklist. It is reported that the owners will take legal action should they not receive an explanation.

NB:  The timeline above will be updated as and when there are new developments. The information in this timeline was compiled using  publicly available online sources.

Mira Sharon is an Editorial & Marketing Assistant at ArtsEquator.