Rebecca G dissects the art of critiquing and the expansion of critical perspectives in the arts criticism. This article is published as part of the inaugural AE x Goethe-Institut Critical Writing Micro-Residency 2021/2022.

I’m writing this with all possible biases in mind. I am myself a maker and critic / researcher of performance, which lands me in a limbo between both worlds of the judge, and the judged. You could call it a conflict of interest, or an exercise in self-flagellation—as I attempt to persuade you to consider an alternative way of approaching the field of arts critique in this (extremely) brief essay.

There are substantial precedents for discussions of this topic on this very platform, from the exchange of ideas recorded at the Asian Arts Media Roundtable (AAMR) events in 2019 and 2021, to Katrina Stuart Santiago’s thought-provoking piece on the cultural critic in the age of pandemic. I’m merely standing on the shoulders of giants.

I would like to articulate an aesthetic prospect of performance critique, and its potential influence on the fringes of the industry today. For brevity’s sake, this article will hone in on experiences of theatre performance, and other vicinal praxes (i.e. performance art, live installations, et cetera).

The conventions of the ‘arts critic’ remain etched in public perception. This particular individual determines what a ‘good’ or ‘bad’ piece of art is, and in many cases ascribes value to what they’ve seen — be it monetary or aesthetic. This measuring stick is more often than not based on the individual’s own preferences.

“Whatever theory is held… there are really only three major questions to be asked in arts criticism: (a) What is this? (B) What does it mean? and (c) What is its significance?” (Anderson 1993)

Anyone who’s experienced an aesthetic event, and has an opinion about it, can be a critic by virtue of these three questions. They may choose to formalise their thoughts in a newspaper column, or in conversation with the audience member seated next to them.

These questions give rise to the “primary traditional processes of criticism: (a) description, (b) interpretation, and (c) evaluation”. Their practicality has proven itself largely over the years. I would however argue that this methodology is no longer sufficient for the broadening pluralism of the contemporary era. As we continue to bridge the chasms of isolation and division in the wake of recent global events, there is an ever-growing need for an equally dynamic approach that foregrounds human connections, intentionality, and active dialogue.

The usual frameworks deny the critic of constructive subjectivity to some extent. There is on one hand an emphasis on rational responses to artistic work that implies a centuries-old prejudice against “the cognitive power of feeling” (Abbs 1993). Critics have to maintain objective distance at all times to establish their authority and professionalism on the subject. On the other hand, there are examples of critical writing that have declared a production ‘frustrating’, ‘incomprehensible’, and even ‘self-pitying snivel’. Artistic labour is reduced to rating systems and stars. We are wrestling with the prevalent notion that severe criticism is required to incite progress for the industry. Is there a middle ground to be found—a fertile landscape that allows for mutual growth through interactions between the critic and the critiqued?

I’d propose that this middle ground has to be drawn (pun fully intended). Akin to the arena of imagination afforded to art-makers, there should be space for critics to exercise their creative capabilities, and experiment with their critical practice in response to the performance they are addressing. An artistic product is “neither pure impulse nor its form, but rather the congealed process that transpires between them, and this process is social” (Adorno 2000). The assessment of a piece of art’s “truth content” has to be dialectical, disclosive, and non-propositional. Striking up a conversation with something you’re confronted with through spontaneous art-making—a series of squiggles, poems, describing a colour you’ve not felt before till this encounter—can be a foundation for critical methodologies that are more inclusive, and less reliant on hierarchy. These aesthetic responses can offer as valuable an insight as strictly textual critique. 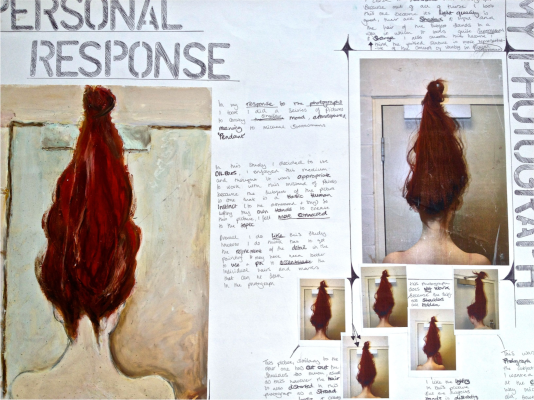 “… using my own hands to create this picture, I felt more connected to the topic.” An example of a personal response to a painting through the medium of photography 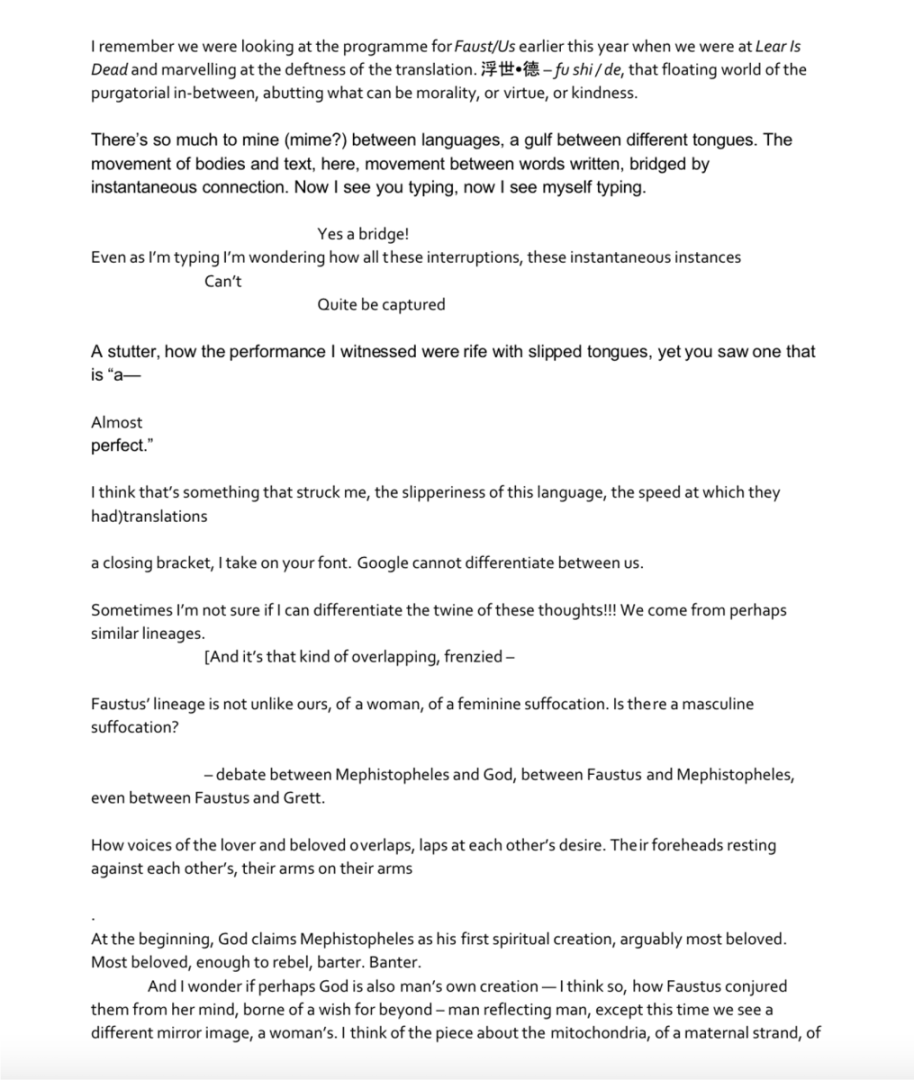 No longer is the identity of the critic reserved for institutionally-backed journalists and academics. The proliferation of theatre critics on platforms such as social media and blogs has led to an independence and diversity not previously seen before. This democratisation is an exciting phenomenon that lends itself well to contesting what has defined ‘acceptable’ critique.

The critic is most visible, and arguably at their most powerful, at the thresholds of the industry. Eclectic venues, limited seating capacities, genre-defying shows, frequent negation of boundaries between the stage and audience — there is an intimacy inherent in the connections forged within the maelstrom that is fringe theatre. The critic is indubitably a large part of that infrastructure. The financial and long-term success of work that occurs in these spaces is more reactive to word-of-mouth marketing, which includes public reviews.

I’m passionate about the expansion of current critical perspectives as it would allow these relationships to flourish. We are all intertwined even on the peripheries of a vibrant theatre scene. Critics are necessary in recognising the importance of these alternative communities, and emphasising their cultural value through aesthetic dialogue is a way to continuously generate interest in work that might not necessarily be as linearly understood. This ‘spectator as collaborator’ worldview can be found in various non-Western theatrical traditions, where the perceiver is the locus of performance. “To look at Yoruba art is to dance, sing, and chant poetry with one’s eyes” (Okediji 1997). “Interpretation is something that happens to Western art. Interpretation is Yorùbá art” (Odom 2009). In the Natyashastra:

“The theory of Rasa-Bhava establishes a relationship between the performer and the spectator. The model spectator is a ‘Sahrdaya‘, someone ‘who empathises with the author.‘ Since the success of a performance is measured by whether or not the audience has a specific experience (rasa), the spectator becomes a vital participant in the play.” (P.G. 2020)

Performance critique involves an intricate web of conversations between the dramatic text, artists, and critics. Due to this proximity, the critic could not only offer external evaluation, but interpretative interaction as well. Perspective can be postulated as a “point of view” /  a “way of seeing”, or as “walking in someone else’s shoes” (Hage 2014). The latter is an approach that is often neglected in the way we assess an aesthetic product. There is value in initiating three-dimensional contact that actively contributes to the world of the play. Artists would have to embrace this working relationship too — examples of such incorporation of interpretative / feedback circuits into creative processes include P7:1SMA’s District 18, Impromptu Meetings’ in-house critic, and Southernmost Festival’s critic-in-residence.

This implies the need for critics to exercise intentionality and care.

It can’t be sustained as a ‘top-down’ affair.

Aesthetic analyses are not just a catharsis of personal taste; as outlined in Corrie Tan’s The Intimate Critic, they should be holistic, inspired, and have a genuine desire to support the production’s development. Regardless of what was or wasn’t lacking, performance critique should be a creative, multifaceted collaboration towards an excavation of meaning.

Critics are neither outsiders, nor immune to scrutiny. Anyone who writes or speaks about theatre can be held accountable, and is able to encourage and defend innovation. Between the work and its creator, the critic is the third act—an illustration of the admittedly fragile fraternity between stakeholders in the arts.

The aesthetic critic is a partner in crime. They can be a voice for artists whose work remains unseen and censored by the state. They are responsible for facilitating kinder, fairer discourse in a highly competitive industry, where access to funding and opportunities is mysteriously selective. They can be fellow creatives, whose appreciation for the arts can manifest itself in an exchange of brushstroke narratives that deepen with every word.

This is an invitation for critics to ruminate more intentionally on what their practice could be. Theatre critique has traditionally presented itself as a prescription of cultural taste / thought for the audience. However, it needs to celebrate the “sensuous and felt” (Rajendran 2006), which is particularly important in a discipline that emphasises enactment and embodiment. There has to be a sense of personal and artistic engagement. That could emerge as a series of photographs, sketches, a handwritten letter to the artist; or as a conventional article or review. The possibilities are incalculable.

Critics are an integral part of the creative ecosystem, and our analyses should reflect the fluidity of expression that this wonderfully nebulous environment rests upon. The relational dialogism between an artist and a critic should be as conscious as the work itself.

Instead of swinging doors with gatekeepers at the border, we could join the search for a key that allows us all to dream.

A massive thank you to the ArtsEquator team and Goethe-Institut Singapore for the opportunity to partake in this residency. It was liberating and humbling all at once (these two months of writing have indeed brought me back to those days of constant hair-pulling and hand-wringing at university). I’m forever grateful for Nabilah’s nurturing mentorship throughout the process, and the generous sharing of her expertise and time as well. Thank you!

This piece of writing is by no means complete — I wished I could have done more. What I’ve explored here is just the tip of the iceberg. You are welcome to use the bibliography I’ve assembled below for further reading, or to conduct your own research. And while you’re at it, feel free to get in touch with me at rebecca@fromabasement.co if you’d like to offer feedback, suggestions, or a chat! I’d love to hear what you think.

Odom, Glenn. “A Critique of Yorùbá Judgment: Non-Western Performance Aesthetics and the Development of the Nigerian Stage.” Journal of Dramatic Theory and Criticism, vol. 22, no. 2, 2009, pp. 131–146.

Santiago, Katrina Stuart. “From dream to dystopia: The cultural critic in the age of pandemic.” ArtsEquator, 21 May 2020.

This article is published as part of the inaugural AE x Goethe-Institut Critical Writing Micro-Residency 2021/2022. Read more about the programme and the six resident writers here.

Header image is titled “How could we respond to art better?”. Source: comic by Lynda Barry, The Near-Sighted Monkey. 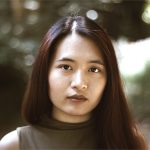