February 2020 seems like years ago, and it feels like escapism to even go back to that time. To some extent, it’s almost like a dream, where for over a week, one had nothing else to do but to watch stage productions from across the world; the plethora of voices, the various bodies, the intellectual exercises, a reminder of how large the world is, how massive the notion of performance still is, and how ironic that it still depends on the smallness of the live collective experience. This year’s TPAM (Performing Arts Meeting in Yokohama) was also extraordinary because it gathered together Southeast Asian critics who are kindred spirits, who know of how difficult critical work is, and how while it is neglected and dismissed, if not shunned altogether, it is labour that is invaluable.

And in the midst of a pandemic like this one, even more so. For while we now know that stage performance might take a year or two to get back into the theatre, this need not mean there is no work for theatre critics. In fact critical work becomes even more important, as it is pushed in the direction of drawing from bigger pictures, looking at how cultural work has been so affected by this pandemic, towards the urgent task of imagining a future for culture.

The artists and creators, academics and scholars, critics and writers need to come together to flesh out possibilities for the best way forward. The critic and the distance she keeps, the line she draws between herself and the sector she writes about, the credibility and independence she nurtures, is in the best position to help in fashioning this future. I’ve always believed that the practising critic cannot help but be a cultural activist, that this is the logical conclusion to the work that we do. The state of the world given this pandemic seems to give us no other choice. The truth that the cultural sector is the least protected, and the last to rise up from the ashes of this pandemic is reason enough to give it a try.

In the past eight weeks of this lockdown though, I have admittedly focused on elsewhere, even as I’ve kept close watch over how the cultural sector has navigated these times. PAGASA (People for Accountable Governance and Sustainable Action) has taken up much of my time. A start-up organisation that seeks to build a new civil society made up of my generation (X) and younger generations (Y, Z), that will consistently demand for accountable governance, and find ways towards relevant sustainable action given the state of the nation. This pandemic seemed like the best time to push for its launch, with initiatives that sought to fill the gaps of government response: primarily feeding daily wage earners and other vulnerable sectors during this lockdown, but also bringing hot meals to healthcare workers, and delivering medical supplies when we can. We have focused on these initiatives even as we demand for a science-based, public-health-focused government response, even as we have kept our critical distance from the propaganda of resilience and unity, as we insist that to help at this juncture is a critical act.

To some extent, this is the work an arts and culture critic might do for the sector as well. Where on the one hand we support the initiatives that address the urgent needs of cultural workers, which means banking on dole-outs both from government and the private sector; while on the other, we look at the ways in which assistance for the cultural worker can be sustainable, given that what any cultural worker would want at this point is the promise of work, not the promise of dole-outs.

The task of fashioning this future needs to be cognisant of how cultural workers have been revealed to be most vulnerable and least protected in a time like this one. It has to question why it is that a majority of the neediest cultural workers are at the mercy of those with the millions to spare; and how losing access to a theatre, a physical space, means the complete loss of livelihood for these workers. Looking to the future shouldn’t just be about figuring out when we can go back to the theatre; it needs to be about demanding that the conditions surrounding our return to it will be more just, for all workers. This means admitting to how the current systems oppress us and how we can shift towards kinder, more compassionate ways of making.

The critic’s work has always been seen as secondary to the sector it has as subject, her voice a negligible appendage to the task of creating work. But that is not true anymore. The pandemic proves that we are all equally affected as we are responsible for each other. A very small percentage of our cultural workers are unaffected by this pandemic; but a majority of us are losing sleep over what the future will be like. We are the ones who need to come together to fashion this more just, more fair, more compassionate future. No one else can do it for us.

The memories of Yokohama from four months ago are vivid, but not a lot of it is about the theatre productions anymore. Instead it is about three girls from different countries walking down the harbour after an early morning call time for an interview and a fancy lunch with wine, joking about which of those boats they could see might be the one with the virus. It is about a larger group of women, sitting down at Amazon Bar for free dinner and drinks, where we talk about plays we just watched, but also primarily and really talking about ourselves — who we are as people is revealed by how we talk about art and culture, after all. It is about walking the streets of Yokohama close to midnight, planning when we might see each other again, the projects worth putting together, and deciding we will do it, all of it.

But then we all came home and the world changed.

Katrina Stuart Santiago is an independent cultural critic and opinion writer from Manila, with a decade of work in print and online. Her critical work on theater, film, visual arts, and popular culture was published in Rebellions: Notes on Independence and Romances: Variations on Love by the Ateneo de Naga University Press in 2017. Her role as critic has fuelled her activism, which cuts across issues of cultural labor, systemic dysfunctions, and institutional crises. She is contributing writer for CNN Philippines, and is teacher of multimedia arts at the College of St. Benilde-School of Design and the Arts. She maintains the review website gaslight.online, and has been writing at www.katrinasantiago.com since 2008. 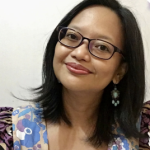 Katrina Stuart Santiago is an essayist, cultural critic, opinion writer, and book author from Manila, with a decade of work in print and online. Her role as critic has fueled her activism, which cuts across issues of cultural labor, systemic dysfunctions, and institutional crises. She is a teacher of writing and criticism, a book producer at small press Everything's Fine, and editor of review website gaslight.online. In 2020, she founded People for Accountable Governance and Sustainable Action-PAGASAph that seeks to provide the space for political action from younger civil society actors. In 2021, she became part of the first cohort of the Feminist Journalist Project of the Association of Women's Rights in Development. She has been writing at
katrinasantiago.com since 2008, and is @radikalchick online.