Skip to content
While the stated theme of the Biennale is to challenge the hegemony of the West, Nicole Wong finds that the spaces created for these interventions to happen struggles against the behemoth of the Biennale itself.

The 59th International Exhibition of the Venice Biennale, entitled The Milk of Dreams, boasts a bold vision. Artistic director Cecilia Alemani was inspired by the book of the same name  by Leonora Carrington, which depicts a fantasy world where life is constantly re-envisioned through imagination. This edition of the Biennale attempts to challenge the hegemony of Western visions of humanity with the  opportunity to remake the world through imagination. Yet, the history and undeniable pageantry of the Venice Biennale sits at odds with this agenda. As countries presenting to a largely Western audience, the Southeast Asian exhibitions ultimately contend with what it means to present work within a cultural space that has historically relegated their artists to the peripheries of the international art scene. For the Southeast Asian artists on show at the Biennale, dreaming up possible futures first requires a reckoning with the frictions of the past and present.

The Singapore Pavilion sits as a stark white structure in a building of warm, worn wood. This seemingly sterile enclosure is a vessel for a work built around trauma, destruction, and communities coming together above it all. Referred to as the “paper maze”, the giant white panels drape from ceiling to floor fluttering gently with the gusts created by masses moving through space, unfurling less like a maze, and more like a book jacket folding open and beckoning viewers inwards. 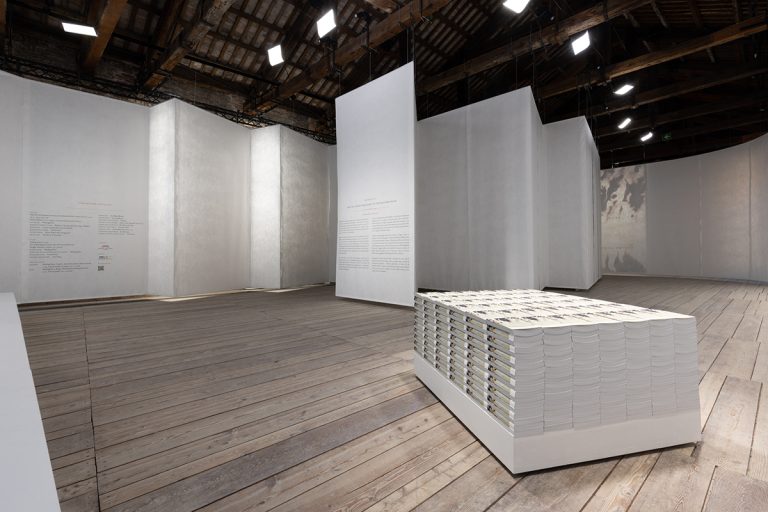 As visitors enter Pulp III: A Short Biography of the Banished Book, they enter in media res, at the midpoint of Shubigi Rao’s ten-year Pulp project. As they explore stories of book destruction, censorship, and print communities, visitors too are weaved into this ever-evolving narrative.

My perspective has been that of an insider’s; for six weeks, I sat in the midst of the pavilion as its docent. Yet, because of the scale of this project, this was still barely enough time to scratch the surface of the work. The artbook Pulp III: An Intimate Inventory of the Banished Book (2022)  lies at the centre of the exhibition, but given the heft of the work and the demands of visiting the Venice Biennale, visitors are only ever able to read the book in part. Moreover, amidst the discussion of endangered languages, alternative libraries, and centres of print, the book is filled with annotations and information that has been scratched out, a reminder that the tome we hold in our hands is only a fraction of an elusive whole.

The third component of the pavilion is a nearly 90-minute long film entitled Talking Leaves (2022) and cheekily subtitled as “An unabridged biography to the banished book”. Most visitors enter and exit the film at different points. Even as a docent who spends most of the day in the pavilion, keeping track of the multiple narratives in the film and holding them altogether is difficult – interviews are only shown in parts, background information is rarely given, subtitles are occasionally absent (and even when present, are only in English), and voices from past interviews seep into the present. However, this cacophony of voices and perspectives present in the film, create an intense viewing experience that offers no easy conclusions or neat narratives. Instead, Rao asks viewers to come alongside her, to become impartial repositories of stories about books and defenders of cultures at the margins – a library personified.

There are notable limitations to the work, most significantly that a large swath of the stories discussed are from Europe and that even though the aforementioned artbook can be taken from the exhibit in some form as part of the artistic gesture of the pavilion, it remains accessible solely to an English-literate audience. But ultimately, telling the story of banished books will always be an incomplete one. As with all absent things, it is nearly impossible to tell the complete story of something that is no longer there.

In the walkways that separate the Sale d’Armi buildings in the Arsenale, a sogna, a chant from the Cordillera region of the Philippines, declaring “Andi taku e sana, Amung taku di sanan” (All of us present, This is our gathering) can be heard, beckoning attendees of the Biennale to seek shelter in the Philippines Pavilion. Inside, another tunnel of sorts has been constructed. The source of the sogna is a video, Speaking in Tongue (2021), where artist Gerardo Tan, transcribes the song into sound notations using his tongue which has been dipped in squid ink. The video is jarring. The rough yet precise stabs of the tongue smear ink across the screen and seem at odds with the soothing call to gathering. Yet, Speaking in Tongue (2021) serves as the artists’ thesis, an introduction to visitors that sound can be transfigured, translated, and altogether transformed.

This year’s Philippines’ pavilion features a collaboration between artist Gerardo Tan, musicologist Felicidad A. Prudente, and weaver Sammy Buhle. The synthesis of this partnership comes together fully in the central space of the pavilion, in the mixed media installation Renderings (2017 – 2021). Long woven textiles hang from the rafters and others cut across the floor. Each textile is unique and their designs depict a “translation” of the sounds that arise from the weaving process. The murmurs and drones from the looms are captured as sound notations that are then transformed into symbols which are weaved into the textiles. Following this, the artists invited musicians to use the fabric as scores with the resulting music being transformed once again into another textile. 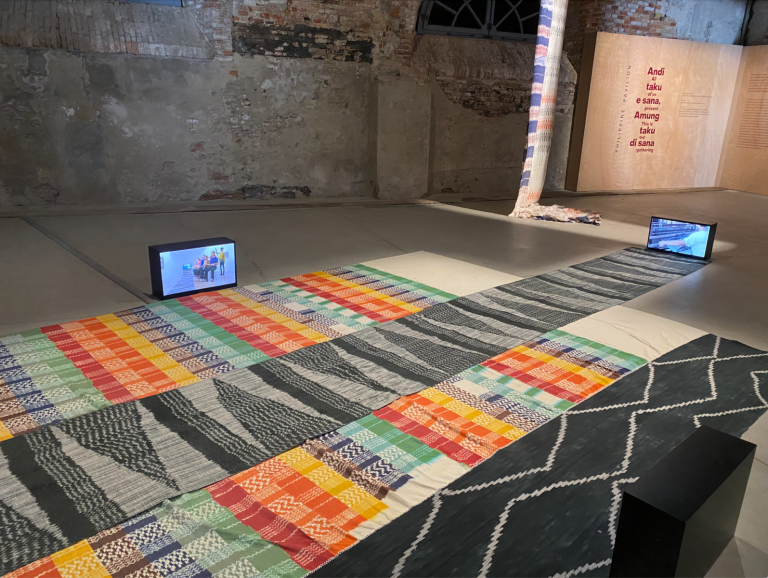 For a country from the Global South to present work that is rooted in indigeneity, a fine line needs to be traversed. There is always the risk of playing into exotic ideals that have been forcibly thrust onto the country and its people. Tan, Prudente and Buhle clearly have a deep respect for this traditional weaving practice. However, it is not guaranteed that their audience at the Venice Biennale would connect with the practice in the same way. Hence, this perpetual feedback loop of translation that the artists have embarked on, simultaneously creates new entry points for audiences to similarly understand the scale and complexity of Filipino weaving.

In the confines of the exhibition space, audiences are surrounded by the whirrings of the loom as they walk amidst the fabrics laid out on the floor, as though they too have been integrated into the craft of weaving itself. Andi taku e sana, Amung taku di sanan is not a call to observe at a distance, but instead, it is a hopeful song that coaxes audiences to fall into the craft and to be immersed in these various ‘translations’.  Upon leaving the pavilion, the visitor becomes a new piece of woven fabric, bringing their version of what they have just experienced out into the world.

Somewhere else in Venice, Pera + Flora + Fauna questions if “aesthetic thinking” is sufficient in dismantling the wounds created by Western imperialism on indigenous peoples and at the same time, in reinstating a balance between people and nature. Pera + Flora + Fauna  is a collateral event at the Venice Biennale which focuses on the Perak state in peninsular Malaysia and consists of contributions from seven artists as well as the people from the Semai tribe from Kg. Ras, Sungkai Perak.

Rather than assuming that all forms of representation are benevolent, Pera + Flora + Fauna launches from an awareness that culture and aestheticization has often been used as a reason and a means to oppress indigenous populations. In Minggu Fesyen Semai (Semai Fashion Week) (2022) by Projek Rabak, members of the Semai tribe dress in their traditional wear as they walk down an imaginary runway with their village in the background, with their gazes directed proudly to camera. Considering the history of oppressors treating indigeneity as aesthetic objects to be trotted out, gazed upon, and cooed over, this is a challenge and an assertion for the Semai people to be seen on their own terms.

Despite these efforts to stake a claim over their own culture, it is undeniable that the physical territory of the Semai remains threatened by the political and economic interests of the state. In Karoog Kiha Nyep – Fragile and Disappearing (2022), by Kapallorek Artspace in collaboration with Ronnie Bahari, a video documentary depicts cave paintings that have been recently discovered in Perak. The work serves not just as an act of preservation for a culture that is guaranteed none from its government, but also affirms the long thread of history between indigenous people and the land that they are on.

Pera + Flora + Fauna describes a recent decision that was made to demolish the historic caves in Perak containing these cave drawings and figures. Considering this impending destruction of this indigenous lineage, the artists have replicated the same cave paintings on the windows in the exhibition, turning the rooms into the caves, and rooting the viewers in a moment of time and space when indigenous culture in Perak had yet to be subjugated.

In the last room in the exhibition, Power Generator Station From Natural Resources (SJKDSA) by Azizan Paiman churns. The two generators that form this installation create a sombre centrepiece that serves as a reminder of all the ways indigenous culture, land and people are seen as resources that fuel machinations elsewhere. Its constant thrum is the soundtrack to a never-ending cycle that aesthetics alone cannot break.

In her curatorial statement, Cecilia Alemani points towards how the The Milk of Dreams has created an opportunity for artists to explore posthuman conditions that look boldly forward, in defiance of the Western, white, male visions that have come to define our modern visions of humanness. However, the Southeast Asian exhibitions on show, prove that to wade in this “milk of dreams”, we must first dive into the messy waters of our past and present. After all, as Shubigi Rao puts it, “…We are, like the characters we read, restless bodies obsessed with our misapprehensions and mistaken identities, elliptical and misaligned, spinning on axes of our own grinding. We lurk in our murk, we are miasma.”

The 59th International Art Exhibition of La Biennale di Venezia, titled “The Milk of Dreams” opened to the public on April 23 2022 and will take place till November 27 2022.

Nicole Wong is an arts practitioner, educator, and academic. Her work is concerned with fluidities of identity and intimacy as they expand across borders, boundaries, and any other lines that are drawn in between. She writes for reflection, discovery, and sometimes, pleasure.

1 thought on “Careening Into “The Milk of Dreams”: Southeast Asia at the 59th Venice Biennale”