Let’s face it, 2021 in Singapore sucked harder than 2020. The waves of mildly inconvenient restrictions did more to chip away at everyone’s mental health than 2020’s “shut-everything-down” Circuit Breaker. Amidst the litany of changes to safe-distancing regulations though, the museums and galleries have remained open.

Here’s my rundown of the highlights of Singapore’s museums, galleries, and visual arts scene in 2021.

If there’s no Singapore Art Week, did the year really begin?

2021 kicked off with the monster that is Singapore Art Week. It returned in a hybrid online-physical format, adapting to restrictions where there were none when it last occurred. Some of the festival’s staples returned to interesting places. The Asian Film Archive’s 2021 edition of State of Motion explored science fiction futures at the equally futuristic Marina One. STPI’s SEA Focus and the Singapore Art Museum’s ethereal and sublime (SAM) CosmicWander: Expedition both held court at Tanjong Pagar Distripark. Reader, keep that space in mind; it’s a surprise tool that will help us later.

Return of the international exhibitions

A staple of Singapore’s art world that fell through in 2020 were the international shows. 2021 brought that back, with National Gallery Singapore (NGS) hosting the Nam June Paik retrospective as its first international blockbuster in almost two years. I’ve only seen the recently opened exhibition vicariously through social media (cue indignant cries of media preview bojio1Hokkien phrase meaning “not inviting someone”. Usually used in jest, and never as a serious accusation. An adequate standard English translation would be “Hey! Where’s my invite?”, which is honestly a mouthful.), so the best roast I can offer for now is that it has more television sets than a Courts Megastore. Not wanting to be outdone, SAM had The Gift, part of an international effort which featured objects from the collections of four museums, in conversation with one another. It’s a cool idea, and I quite liked how it was something different from your usual blockbusters featuring collections from different museums.

Other memorable international shows reminded Singaporeans of both international travel and pre-pandemic creature comforts. One of these was the ArtScience Museum’s Orchestral Manoeuvres, which was a throwback to a time where live music and karaoke were things we could do. Here, the museum did well in drawing from international collections and the history of sound art for an exhibition that I can best summarise as “good vibes only”. Sound art after all has a very immersive quality about it, and here was an exhibition that was made to be experienced.

A roundup of noteworthy international shows would be incomplete without a mention of the KAWS:Holiday debacle. Besides the appearance of a major international artist’s artwork in Singapore, the exhibition made headlines for the court injunction that shut down the display as it was about to open. Turns out that a copyright tussle between organisers was the flashpoint, with the drama continuing past the exhibition’s end. I personally was not very enthused about the hollow inflatable monument to human connection… or something. The crowds that flooded the floating platform for a nice photo would beg to differ.

“We’ll make our own blockbusters!” looked to be the rallying cry of our museums through the past two years. NGS broke out its once-every-two-decades retrospectives of pioneer artists Georgette Chen and Chua Mia Tee with rarely seen artworks and new archival material. While it’s good to have new takes on old favourites, I believe in the importance of exposing visitors to new and oft overlooked artists and art history narratives. Those efforts took the form of Something New Must Turn Up. The survey of six Singapore artists after 1965 featured a dizzying range of artistic experiments in painting, collage, sculpture, batik, and even music. With three women and two Malay artists in the lineup, Something New Must Turn Up has been Gallery’s most diverse show yet.

The Asian Civilisations Museum’s (ACM) usually externally oriented special exhibitions gallery presented Faith Beauty Hope Love, a highlight of its top artefacts with a twist. In a brief shift away from curatorial control, ACM’s company of staff, volunteers, and supporters selected artefacts for display and wrote labels for them. Curatorial involvement limited itself to the exhibition’s overall direction, the obligatory artefact description, and the artefacts curators had picked themselves. The resulting show is one that was intimate and reflective as it was refreshing. This is what broader collaboration on exhibitions can look like, and I do wish to see more of it. 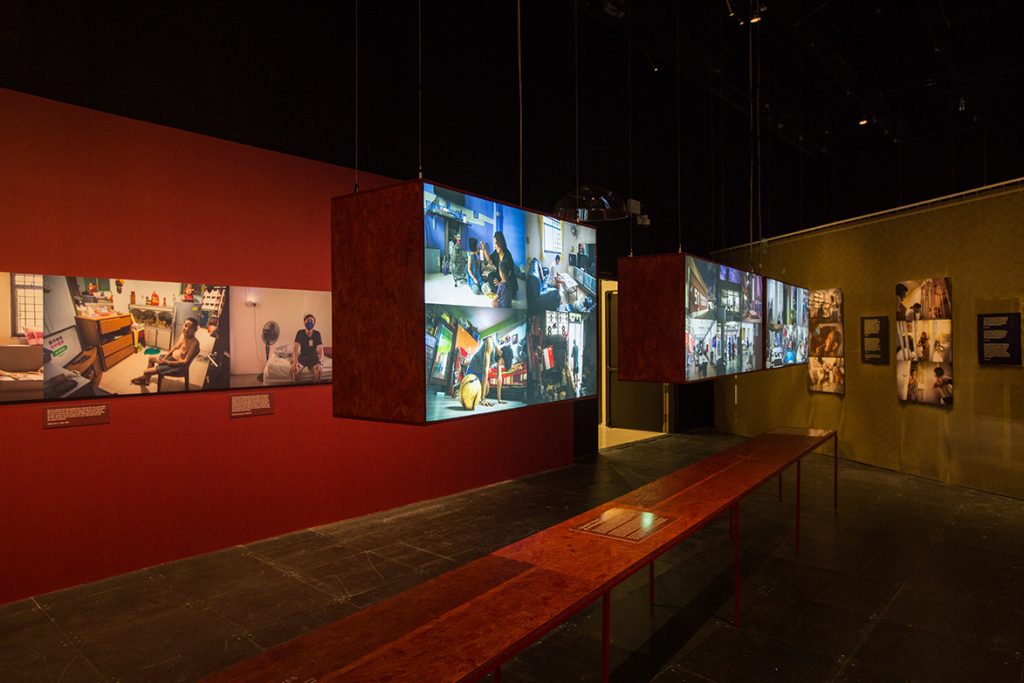 Another year under the pandemic gave rise to the National Museum of Singapore’s (NMS) Picturing the Pandemic. I have been lukewarm about the idea of an exhibition about a pandemic being held in the middle of a (still ongoing) pandemic. To be fair, Picturing the Pandemic probably meant to reflect on the Circuit Breaker and the period after, amidst Singapore’s planned reopening. No one could have foreseen the cosmic mayhem of 2021 that threw these plans into disarray. Despite my issue with the show’s timing, NMS’ contemporary collecting efforts did come through in documenting a significant period in Singapore’s history. I also liked that the exhibition did not avoid the tough topics, such as how migrant workers and underprivileged families had been disproportionately affected by COVID-19.

New (and new-ish) kids on the block

Its photogenic pastel playground appearance may suggest otherwise, but I think I can get behind the Museum of Ice Cream’s ownself-declare-ownself museum status. Like its ice cream selections and visitors’ OOTDs, the exhibition space is still a curated one. Taken together, it offers an experience that hovers the thin pink line between joy and jelak2A Malay word that is colloquially used for the “sick of eating” feeling that comes from stuffing yourself with overwhelmingly rich foods. Also commonly misspelt and mispronounced as ‘jelat’ by folks who don’t speak Malay.. While I may complain about how shallow the entire spectacle is, I do expect the sprinkle pool and tubs of ice cream to be deep.

There is also the new arts university comprising the Nanyang Academy of Fine Arts (NAFA) and Lasalle College of the Arts. Its positioning as an alliance seems to keep Lasalle’s and NAFA’s individual identities as storied colleges with decades of distinct traditions. I think maintaining some kind of distinction is vital for cross-college collaborations and exchanges, lest they become too similar to each other. In lieu of further details, the best we can do is speculate on the university’s new name. My personal picks are ‘Lafa’, ‘Nasalle’, and the quintessentially-Singaporean ‘Arts University’.

As institutions open, others close; such is the circle of life in Singapore’s forever-developing arts scene. Notably, The Substation announced its closure as an arts space, ahead of plans by the National Arts Council to convert it into yet another ‘co-working space’. That was before its last-minute revival by several arts practitioners in a “Top 10 anime plot twists” play, marking the start of Substation 2.0. Also saying goodbye for now is The Private Museum, which departs Waterloo Street to a yet-to-be disclosed (but hopefully bigger) location. While the Nanyang Technological University’s Centre for Contemporary Arts (NTU CCA) has shuttered its exhibition space and artist studios at Gillman Barracks, it lives on in its research and administrative offices. Even with CCA’s departure, the district is still there thanks to F&B outlets like Creamier and Hopscotch. Oh, and also the other commercial galleries that are still hanging about.

Reflections at Bukit Chandu and the Changi Chapel and Museum make their comebacks as outposts of NMS’ permanent displays of the Second World War. The exhibitions at both museums were in sore need of a revamp, which they got in time for the 80th anniversary in 2022 of the British surrender in 1942. At this point, I think exhibitions about the war could go beyond retelling what happened, and take stock of how Singapore remembers and commemorates the period. Perhaps the country could consider therapy for all that unresolved trauma from the hell of war and occupation.

Speaking of hell, Haw Par Villa, everyone’s favourite moralistic trippy theme park, returns after nine months of renovation. The newly restored park includes a F&B concept, and the brand new Hell’s Museum (Tip: Check out their FAQs, it’s a hell of a read). There’s also the newly air-conditioned Ten Courts of Hell, which is now behind Hell’s Museum’s paywall. I think the admission ticket’s cost is a small price to pay to keep the Courts open for a new generation of parents who want to scare their kids into behaving themselves.

2021 was the year of museums bringing themselves closer to the people. To remind everyone it still exists, SAM has its “Museum In Action” initiative. Yes, its similarity to “missing in action” is all part of a plot to get people to rethink the idea of the museum as a physical location that houses artworks. I think it’s also a plot to make contemporary art relevant to the public, and I’m all for it. Besides its new cavernous exhibition spaces, artist studios, and offices at Tanjong Pagar Distripark (told you it would reappear), SAM also plans to bring its programmes to various venues where the public is. That is, everywhere but their currently closed premises, slated to reopen in 2026.

For all of that, NGS seems to have beaten SAM to the punch in literally bringing art to people’s homes. The People’s Gallery (which does sound pretty communist, not gonna lie) turns “your house downstairs” (i.e. the humble HDB void deck) into an art gallery. It’s not a new idea, but this time it’s Singapore and Southeast Asian artworks that are showing up. There won’t be any actual artworks though, as scannable QR codes link you to an artwork from NGS’ collection. No need for conservators, art handlers, and gallery sitters to tell people “don’t touch”. Its short stint aside, I hope NGS does this more often. Perhaps it could consider suggestions from the public on which neighbourhoods to go to next, and which artworks to include. That would truly make these void deck galleries the People’s Gallery.

Singapore had its non-fungible token (NFT) moments. A Singapore-based entrepreneur bought a Beeple NFT work for US$69 million (nice). Singapore artists, from new faces like The Next Most Famous Artist, to established names like street artist Speak Cryptic and veteran watercolourist Ong Kim Seng are getting in on the action. Heck, there was even a NFT exhibition at Le Freeport, which honestly felt like your usual display of contemporary art. Singapore’s museums largely seem to take a “wait-and-see” approach, though there are some potential museum uses for blockchain they could look into. However, there are also concerns about the environmental impact of NFTs and the cryptocurrencies they trade on, to say the least of the other ethical concerns. If you ask me, please don’t screenshot NFTs. Right-click and save them instead! It helps with the image resolution, and it works for GIFs too!

I’ve not made New Year’s resolutions, because disappointment comes from having expectations. Still, I do hope for more thought-provoking and intimate exhibitions, collaborations with the public, and making art accessible in general. As for things to look forward to in 2022 besides Twosday, there’s Singapore Art Week 2022, the Singapore Biennale, the Singapore pavilion at the 2022 Venice Biennale (whose homecoming show I await because international travel is a luxury I can’t afford), and the prospect of more exhibitions opening as pandemic restrictions lift. Outside of these, my own personal interests lie in open mics for music, comedy, and poetry, and boy do I want them back. Of course, we had the same hopes last year, and look how that turned out.

@sgmuseummemes can be found being the little gremlin they are on Instagram. All opinions expressed here are their own. You may want to take this article with a pinch of salt. 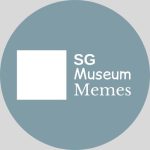 @sgmuseummemes is human being by day, and gremlin pretty much all the time. They have been roasting museums and the visual arts scene in Singapore with memes since 2020. @sgmuseummemes thinks you should read the artwork description first.