ArtsEquator Southeast Asia Radar features articles and posts about arts and culture in Southeast Asia, drawn from local and regional websites and publications – aggregated content from outside sources, so we are exposed to a multitude of voices in the region. Here’s a round-up of content from this week, scoured and sifted from a range of regional news websites, blogs and media platforms, and brought together in one article for convenient reading in our Southeast Asia Radar.

MANILA, Philippines – Over 300 people have urged the National Commission on Culture and the Arts (NCCA) to investigate an alleged sexual assault against a female writing fellow by a male keynote speaker and panelist at a recent writers’ workshop.

More than 50 former fellows and two former panelists of the Iligan National Writers Workshop, along with over 300 individuals, signed an open letter to the NCCA on Tuesday, August 6, urging it to conduct a “thorough and independent” probe considering it had funded the workshop held in May.

The 66-year-old rock star beloved here and and at home across the Causeway, also known as “Papa Rock” and “Malaysia’s King of Rock”, recently belted out a more sombre version of the song during rehearsals for the National Day Parade that drew ire from Singaporeans on popular tech forum HardwareZone.

Singapore’s government has accused two YouTubers of making a “blatantly racist rap video” in an ongoing row over an ad which the rappers describe as racist.

It said they showed contempt for Singaporeans concerned by their video.

The satirical video, created by Preeti Nair – also known as Preetipls – and her rapper brother Subhas, is full of expletives and takes on the subject of race, highly sensitive in Singapore.

Intimate Strangers manages to be two rare things. It is a collection of unflinchingly honest, revelatory and intimate accounts of being LGBT in Asia, where such voices are often brutally silenced or, at best, subdued and ignored. It is also a showcase of creative English non-fiction from Asia.

The editors say they deliberately preserved each contributor’s vernacular English to celebrate “the variety and richness of English as it is used throughout the Asia-Pacific region”. And that is important: an anthology reflecting a diversity of experiences should allow its contributors to sound like themselves which, in any case, can enrich the language.

The Kalimantan Indigenous Film Festival (KIFF) returns this year to amplify the voice of the often marginalized people.

A lineup of 21 films, mostly documentaries, will be screened in Cinema XXI in Palangkaraya, Central Kalimantan, on Aug. 9 and 10. The curated films come from local filmmakers in Kalimantan, Papua, Yogyakarta, Bali, as well as Thailand, India, Africa and Malaysia.

“We have had enough of filmmakers trying to depict indigenous peoples in a certain frame or even associating a certain stigma with us. It is time for us indigenous peoples to show who we really are, our cultures and beliefs. Not only to correct what has been presented before, but it should also be seen as self-empowering and self-discovering for us as well,” said Emmanuela Shinta, the founder of Ranu Welum Foundation, which organizes the festival.

KUALA LUMPUR: Malaysia’s Chinese and Tamil associations on Monday (Aug 5) urged the government to put the teaching of khat calligraphy on hold in vernacular schools, after a decision by the Education Ministry to introduce the syllabus stoked controversy.

This came after the ministry confirmed last Friday that khat, or Jawi script writing, will be taught to Year Four students in Chinese and Tamil vernacular schools as part of the Malay language syllabus beginning next year.

The decision caused an uproar among the local Chinese community, which is known to be protective of its mother tongue education. 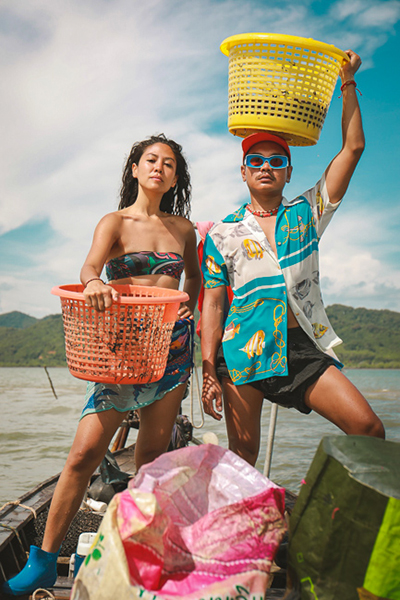 Who needs an Instagram filter when the glorious sun has painted everything with a golden halo? The warmth of its rays hit my cheek just before 7am, and I rise out of bed and head down a stoned paved path. Seated upon rattan chairs, I peer out through open folding patio doors to Cape Kudu’s infinity pool and then beyond to the far-reaching shimmering waters of Phang Nga Bay. In the distance, I can barely make out a smattering of limestone cliffs, and above them, a swath of wide open sky with not a single high-rise in sight.

For four days and three nights, this was my morning ritual at Camp Cape Kudu, an artist retreat at the five-star Cape Kudu Hotel. While it was more short-lived than a typical artist residency, the notion of carving out time and space to become immersed in a new environment, culture, and community was still just as resonant.

“Reamun, reamun ey,” intones the singer in a high, throaty tenor. “Spread your magic. Invite your spirit friends to join us this night.” I’ve heard this song at least once a night for the past week while attending Laeng Neak Ta and Laeng Arak spirit possession ceremonies in rural Cambodia, but it always gives me chills. And Cambodian people tell me there’s good reason for the goosebumps: they are the mark of the spirits called by the music to commune with us mortals for the evening, written in our flesh.

Some spirits are benevolent and some better kept at arms’ length, but none can resist the sounds of pleng arak, or spirit music – so long as the musicians play well, that is. And I have to say that I understand the appeal.

TWO copies of Majallah Filem with their corners peeking out from the mid-section of a pile of vintage magazines catch my eye. Without a moment’s hesitation, my hands reach out to dislodge them carefully. During the process, a quick search of the remainder fail to reveal more copies of this Malay film periodical that was very popular nearly six decades ago.

My heart skips a beat when I realise that the publications are rare early editions produced in 1960. Still in very good condition, their pages are filled to the brim with news of the latest movies that graced the silver screen at that time and also photographs of actors and actresses who were the biggest names in the Malay film industry then.

Videos of Cebu’s famous dancing inmates have gone viral several times since 2007 but not much is known about life inside the prison where they’re detained. A Netflix documentary dropping this month offers a look inside the facility and into how prisoners cope amid Philippine President Rodrigo Duterte’s war on drugs.

Happy Jail is directed by Emmy Award-winning Filipino-American filmmaker Michele Josue and will be available on Netflix come Aug. 14, Wednesday.

A trailer for the five-part series was released yesterday and shows a glimpse of what the audience can expect.