Top Picks of Indonesia art events in Jakarta, Bandung, and Yogyakarta from 3-9 September 2018

The Warna Warna Exhibition is a collaboration between the singer Andien and the Art Therapy Center Widyatama that is exhibited this week at Dia.Lo.Gue Artspace in Jakarta. Translated as “colors”, Warna Warna invites all of us to see the colors of the world through different perspectives as we look at the artworks created by friends with special needs from the Widyatama center. The exhibition closes on Sunday, 9 September 2018. For more information on the exhibition, click here. 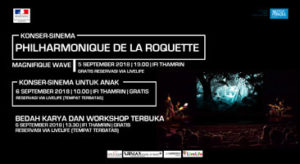 On Wednesday and Thursday, Institut Francais Indonesia presents Le Philharmonique De La Roquette, a group of French musicians that plays live accompaniment music to silent films and other performances such as dance and poetry reading. Partly pre-composed and partly improvised, the music played by Philharmonique De La Roquette takes the audience’s imagination on a journey as they watch the film/performance. Catch the performance Magnifique Wave on Wednesday, 5 September at 7 PM at Le Meridien Hotel. There will also be a concert for children on Thursday, 6 September at 10 AM, and a Discussion and Workshop session on the same day at 1:30 PM. For more information on the performances and workshop as well as information to purchase tickets, click here. 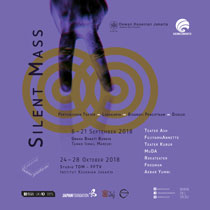 Throughout the whole month of September and October the Djakarta Teater Platform presents Silent Mass, a series of performances, discussions, workshops, film screenings and other events that are curated in an effort to widen the grey area that exists as we learn to understand ourselves in the extreme realities that we have to face. This 2-month long theatre event is organised by the Jakarta Arts Council, the Ministry of Communication and Information, in collaboration with The British Council, Japan Foundation, Jakarta Arts Institute, and Sanggar O. Expect to see various presentations and performances by groups from Hong Kong, Japan, Europe and Indonesia. All events are FREE for public. For more information on Silent Mass, click here. To see the agenda of activities, click here. 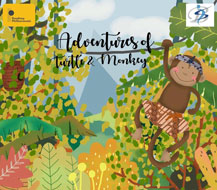 Parents in Bandung and Jakarta, take your children to Bandung Philharmonic’s next concert titled Adventures of Turtle & Monkey, where children can learn the value of friendship through a beautiful musical narrative. Adventures of Turtle & Monkey will be performed on Saturday, 8 September 2018 at 1 and 4 PM at the Shoemaker Studios in Jakarta and on the 9th of September at 1 and 4 PM at the Bandung Independent School’s auditorium in Bandung. Purchase your tickets through Yellowdoor or contact +62 8221 8000 266. For more information on the performance, follow Bandung Philharmonic’s Instagram here. 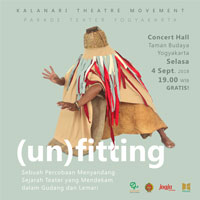 In Yogyakarta on Tuesday, catch (Un)Fitting: Sebuah Percobaan Menyandang Sejarah Teater yang Mendekam dalam Gudang dan Lemari by Kalanari Movement Theatre. As the title expressed, (Un)Fitting is an attempt to carry the history of the theatre company that was stored inside its warehouse and wardrobes. Using costumes from Kalanari’s performances in the past 6 years, (Un)Fitting gives new stories to these costumes while they are worn by new bodies. (Un)Fitting is created by Ibed Surgana Yuga and will be performed at Taman Budaya Yogyakarta on Tuesday, 4 September 2018 at 7 PM. For more information on the performance, visit Kalanari.org. (Un)Fitting will be performed as part of the Yogyakarta Theatre Parade. Catch other performances in the parade on the 4th and the 5th of September at the same venue. For more information of the Yogyakarta Theatre Parade, click here.