Skip to content
Faisal Tehrani’s 'Ghaib', a complex portrayal of family, agency and voice, contends that real emancipation is still elusive in our society.

It’s hard to not think about “space” and “voice”––metaphorically and politically––when watching Faisal Tehrani’s latest play, Ghaib, directed by Fasyali Fadzly, and staged recently in Kuala Lumpur. Ghaib shows a family in a fishbowl: a stage in the center surrounded by the audience, where each character is afforded different proximities to different dialogues and spaces on stage.

We watch as a widow tries to prevent the publication of her late husband’s scholarship in the midst of her children’s insistence she does so. The stage is divided into three rooms with the characters bouncing off one another, accelerating, as we watch the nuclear family getting closer and closer to a meltdown. As the actors move around the living room, dining room, and  kitchen––and multiple, intensifying dialogues are voiced simultaneously––I couldn’t help but to lean in, to listen, and to observe more intently.

But as you lean further into the noise of these overlapping dialogues, it detaches you even further from the text. You do not know who to listen to, and you aren’t sure whose words mean something substantial. There is a dismissal, and acknowledgment that happens within these noisy exchanges that forces the viewer to pause and collect the hints of what’s drowned out.

Qayyimah, played by Festival Filem Malaysia’s Best Supporting Actress Junainah M. Lojong, is a widow bombarded by noise from all sides. She is under pressure to publish her late husband’s groundbreaking scholarly works to satisfy the greed and vanity of her children. She is also a mother who holds so many secrets, it almost makes her hidden (ghaib) from her family and society. Despite being a wife who gives her all to her husband for the sake of her children, she is unrecognized, unheard, and unsung to the people around her. 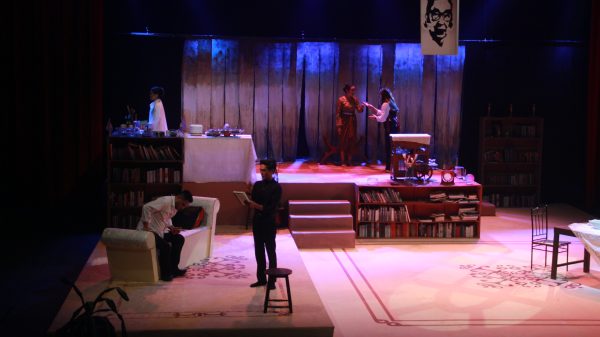 The play is awash in the issues saturating Malaysian socio-political discourse. Qayyimah’s family is a family of intellectuals: her late husband, Professor Saudade, is a renowned sociologist whose works include critical analysis on postmodern feudalism, social justice, and political-religions dynamics in society. His works have shaped international socio-political discourse and in one scene, he is deemed “the doctor who cures the society’s ills.” Qayyimah’s first son Abraham (Kirin Muhamad) is an Islamic-scholar-turned-politician who knows how and where to drop the right fatwas and Islamic guidelines to back up his actions and speeches. His wife Tengku Maimunah (Nesa Idrus) is a member of a royal family, and together, they brag about the pilgrimages that they’ve made to Mecca and their charity. They cannily deploy the  “sharia-compliance” tagline when marketing all the products they sell. Qayyimah’s second son, Isa (Fadhli Masoot) is American-educated and still finding his footing in his career. His wife Suriram (Zera Hariz) is a mid-career scholar thriving in the American academic landscape, and was a student of Professor Saudade (we later learn she was also Saudade’s former mistress). Together, Isa and Suriram are obsessed with the benefits they will gain from the publication of Qayyimah’s late husband’s works––be it economical, social, or political acknowledgement.

It is clear that Ghaib is casting its gaze back on the contemporary Malaysian audience looking in on it, highlighting the many uses to which religious moralities are placed by the powerful and dominant classes to maintain their status quo. In one scene, Abraham questions if corruption is even haram, because who is to say if state funds are being stolen if no one can point to an individual who owns them? Faisal Tehrani deftly spotlights the absurdity in Malaysia’s politics and social discourse but, at the same time, the play also reflects on the global political discourse that has become severely reduced to “he says, she says,”; where truth is malleable and hyper personalized perspectives are privileged.

But to me, it’s even more fascinating to analyze Ghaib’s truth in its textures, not just its text. As these actors say their overlapping lines, and as things go missing in translation or expression as a result, I can’t help but observe how unheard Qayyimah is among her children. Her reluctance to publish her late husband’s work is dismissed and at times, her children’s ridicule of her perspective is barely disguised by their polite chatters with their mother. The dismissal and erasure of Qayyimah’s voice is buried in speeches about big ideas: about what kind of democracy society deserves, and what kind of politicians should be elected. Qayyimah’s ambitions and desires are sidelined for the sake of a new-wave of ideas: a new coat of paint on the old hierarchy. 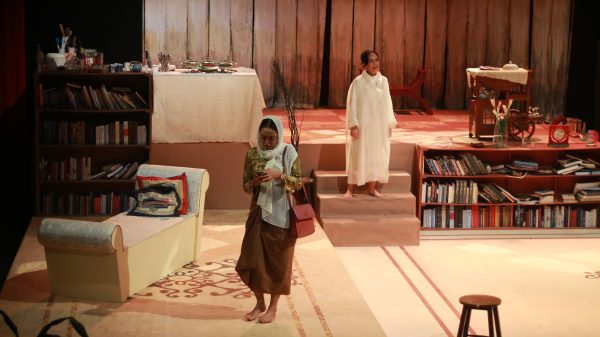 Qayyimah’s experience and the dynamic on stage made me think about the dismissal of the voice of a woman, which in turn also symbolizes the other marginal voices that are usually unheard and dismissed–– the refugees, the poor, the exiles, the aged out––regardless of how much truth they carry. For a moment, Qayyimah seems to slowly be able to reclaim her voice and truth as the play reaches its climax. Closer to the ending, in the second last scene, Qayyimah then reveals to her children that she, in fact, is the only true author of all of her late husband’s groundbreaking works. All her life, her husband had seized and repressed her voice, parading her works as his, profiting and getting social recognition from them. Although she is again bluntly dismissed as crazy by her children, it is here––in this moment of gasps––that the audience can clearly see how Qayyimah has been hidden or ghaib, all of her life.

After a series of overlapping chatters, finally in this scene Qayyimah––for a few minutes––is granted a space she’s been denied throughout the play and suddenly becomes the only person talking. As she stands on the stairs in the middle of the stage delivering her truth, she is also standing in  between two spaces––the kitchen and the husband’s library––almost unable to cross any of these spaces she had never belonged in. Qayyimah is the real holder of the truth, and her reluctance now has a very clear merit: all of the works that her children want to profit from are actually hers, and she no longer wants to live behind her husband’s shadow, uncredited and misrecognized.

But the final scene that comes immediately after this self-empowering disclosure by Qayyimah shatters this reclamation. (Spoiler:) Just before the curtain call, the biggest plot twist takes place: Qayyimah is actually an Alzheimer’s patient, who has imagined everything that has taken place on stage so far –  the past hour has in fact been her dream. All the antagonists are actually just her in imagination. Suriram and Isa are reimaginings of the people around her in her hospital, specifically, her doctor and her son. Isa, in reality, is her only son named Sony, who actually has a good relationship with Qayyimah and regrets the fact that he is unable to care for his mother himself. He consults Dr Ram (who was Suriram in Qayyimah’s imagination) for the best care for Qayyimah and even begs Dr Ram to let him spend the night with his mother, which the doctor reluctantly allows, an act of preferential treatment by Dr Ram for Qayyimah and Sony, as this is actually against the hospital’s policies.

Sure, this plot twist is an efficient and evergreen storytelling device. But, it makes me think about how in Ghaib, the voice of its one hidden and struggling female character is perpetually concealed. Even well until the end, her voice is still unable to permeate her most important circle. And even in the ending and only scene where she finally unshackles herself from her own secrets and comes out of her hiding to reclaim her voice and space at last, the victory had to be undone. This moment had to be reimagined (and reduced) as a dream, detached from reality. Because, for a hidden figure like Qayyimah, her voice can only exist in her dreams, there is no space for her voice and presence in the real world, where it is constantly erased, dismissed, and misrecognized. As Qayyimah’s voice can only exist as a fantasy, it is then inherently non-existent. What this ultimately does is to signal how real emancipation and power are still elusive for women, and other marginal communities to achieve in our reality after all. It’s an important but depressing commentary to reconcile with.

Ghaib reflects how the voices from the margins can sometimes only receive a pale echo through the voice of an aged mother, who realized the flaws in her family, in her class, too late. Now she is trapped in a stage that has no center. As the play concludes, I can’t help but think about the noises I witnessed in the middle of the play––the overlapping, intensifying chatter that were saying something and nothing at all. Was it actually alluding to the dream-like experience in Qayyimah’s reality as an Alzheimer’s patient? It’s funny because that might also be the way of the social noise in our realities today––an orchestra of political and social anxiety experienced by people in choosing their leaders, in defending themselves, and even in understanding others. Ghaib makes me feel as if we have been forcing ourselves to filter the noise around us, but maybe, truth can only emerge as we understand that it has to coexist with the noise around it. Maybe that is when we can actually listen better.

Ghaib is a production by the Theatre Faculty of ASWARA and it ran from 8 -11 September 2022 in Kuala Lumpur, Malaysia. 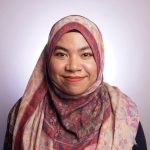 Rahmah Pauzi is a digital content specialist, freelance video journalist, and documentary arts/film practitioner based in Kuala Lumpur Malaysia. She's currently heading the digital content division at a local publishing house, IMAN Publication and previously was the video lead at BFM Radio, where she was also a frequent guest of a weekly arts and culture show, A Bit of Culture, hosted by Kam Raslan. She holds an MA in News & Documentary from New York University, and has done works for outlets such as PBS, Al Jazeera, Channel News Asia, and International Business Times. Most of her works revolve around the theme of home, self-exile, crossroads, and memory. Some of her works include VR documentary Return to Chernobyl, (2016 OJA Nominee), 24 (Szczecin European Film Festival), Welcome to Malaysia, King George Didn’t Know What’s Gonna Happen (Alternative Film Festival 2017), One Day When I Grow Up (One World Media & ASIADOC 2021), and documentary performance A Notional History (TPAM Yokohama, 2019) by Five Arts Centre.