Discipline the City (23 August – 26 November 2017) is a three-act multi-arts exhibition held at The Substation. Going beyond a static presentation commonly utilised in exhibitions, the show includes permanent exhibits, site-adaptive performances, punk tours, talks, workshops, a shop and rotating exhibits. The monumental programme demands repeat visits over the whole period of the show and thematises the space in thought-provoking ways. 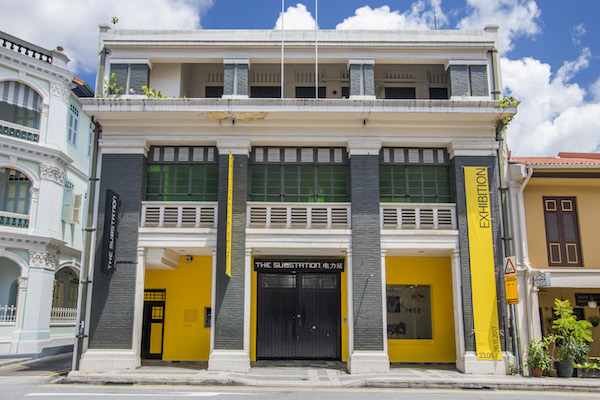 We are going to climb down this trapdoor and peek into the girls’ changing room, punk tour guide Shaiful Risan tells us. We can’t go into the boys’ changing room, though. That one is closed. In a strange yet appropriately rebellious manner, his tour attendants gamely join him in the girls’ changing room. Once inside, however, it is clear that the room’s name belies its true utility today. Actresses are no longer preparing for their performances here. It is a storeroom.

Most visitors would not have visited the basement before. They would not have the memories that people like Shaiful have. Old tape, half-removed vinyl and a large ‘DANGER’ sign adorn the door today. There is no way we will know what the room used to be for unless we are told. Its time as a changing room is long over.

Things have changed. Now, the changing room is usually locked. What used to be a social gathering space for actors is currently hosting Debbie Ding’s installation A Brief History of the Trapdoor. In this room, a projector has replaced the PS1. The sofa has been replaced by a pedestal-bench and the television is a piece of transparent acrylic hanging in mid-air. This part of Trapdoor features a projection of fast-moving visions of trapdoors. Ding’s voice delivers historical facts and contemporary musings about physical and mental trapdoors, titbits that repeat themselves, repeat themselves. What used to be a space for live artists is being occupied by a (contestably) static installation.

The basement may be an underexplored space, but the Theatre is a familiar site. Countless theatrical and musical productions have been held here. It has also hosted film screenings, talks, symposia, competitions, exhibitions, and other events. It is apt that this room is the designated “rotating artists” space.

ACT I (23 August – 24 September) welcomed architecture. Chen Jiehui Avery and Tsui Kuang-Yu’s video work, Playground/Wonderland/Utopia, follows a protagonist through a city, articulating an individual’s relationship to architecture. Calvin Chua’s City of Cores describes a tessellated urbanscape where each room is completely identical to the next. (Not the) Singapore Venice Pavilion case competition presented posters, videos and text that expressed the finalists’ vision for Singapore’s pavilion at the Biennale Architettura por la Biennale di Venezia.

ACT II (4 – 22 October) investigated the space of the Theatre. In Chen Sai Hua Kuan’s video, Space Drawing No. 9, the camera follows the trajectory of a thick black rope being pulled across architectural space. The rope turned corners and whipped pass pipes at high speed, slapping loudly across concrete and metal. Sai’s acutely tactile articulation of spatial surroundings resonates with Stephanie Jane Burt’s metaphorical gesturing. In Burt’s installation, Two by Two They Disappeared, bars of yellow light find their Theatre partner in the overhead pipes, while playfully strung hula-hoops highlight the presence of the dormant scoop lights above.

In ACT III (1 – 26 November), Tan Pin Pin presented several video works, including documentation of a tree being replanted at Singapore Management University. Old-timers will remember the tree as the Substation garden’s banyan tree. The garden was lost to Timbre because of rising overhead costs. Li Xie invited Or Beng Kooi, the “Ah Pek” of Blk 108 Yishun Ring Road, to reconstruct the decorations he made to the Senior Citizen’s Corner at his block. Ah Pek’s original decorations, meant to enliven the Corner, were seen as a fire hazard and removed by the town council. The work of art as an act of enshrinement comes through, as does the curatorial interest in an individual’s power influence on a public space.

It is hard not to feel theatre’s absence in this three-act jamboree. Over the past few months of the show, the Box Office has also steadily degraded from a shop to a storeroom. The shop is currently in the Gallery, replacing Stevphen Shukaitis’ Stop the City…Revisited. It feels as if theatre no longer has a place and that productions will no longer be held.

There is one performance in the programme. In ACT II and ACT III, Pat Toh presented A Map of Scars, Bruises and Bones in two parts, using the Theatre, Gallery and entrance as performance space. Her actors occupy, negotiate and painfully crash against the walls that hold them in. For their changing room, the actors shared the Random Room with Persuasive Design Agency. It was not a ticketed performance.

Perhaps conventional theatre does not have a place in the Substation. As its founder, Kuo Pao Kun, once said, “I want The Substation to be a place … where new art forms which are experimental in nature can be shown.” In looking for theatre, perhaps naming the three parts ‘acts’ is enough to frame the show as a theatrical production. The visitors are the actors here: they act, observe the other actors and simultaneously are their own audiences in the space. While it is an exhibition of largely static objects, there is space to think about it all as an experimental participatory theatre.

The Substation is spatially limited. Ding’s Trapdoor may be occupying what used to be actors’ space, but it was never designed as such anyway. This is an association asserted by the actors. Musicians can also persuasively argue the basement is theirs. Everyone has occupied everywhere at some point in the Substation’s history. Everyone has always made do, recognising the communal nature of the Substation’s spaces. The basement may be an exhibition space now, but every group will be gamely fighting to use it next. In what is perhaps a sign of the scene’s maturity, we have never given up but continuously negotiate the Substation’s spaces, allowing it to continue standing as a “home for the arts” in plural.

All images courtesy of The Substation.

Tags: Discipline The City  The Substation

Chloe Ho is an independent writer on contemporary art in and from Singapore.