This article is republished from the Singapore International Film Festival editorial. It is part of New Waves 2018, an annual series of screenings and dialogues with regional filmmakers. For this third edition of the New Waves series, SGIFF invites participants the festival’s Youth Jury and Critics’ programme to offer an introductory analysis on the four featured filmmakers.

I did not expect to feel unsafe in the safest nation-state in the world.

It was 9 p.m., early for a Saturday night. I had ordered a cab home and the driver was friendly, too friendly; creepily friendly. At first he asked me a string of questions, hurriedly unpacking my personal life in the awkward intimacy of a private car. And then, “You’re pretty,” he said, as he studied me from the rearview mirror.

As I wrestled with my annoyance and my fear—whether out of habit or conditioning—out tumbled a “thank you”. He leered, and I shrank into the back seat, ashamed at how much I struggled with being assertive, how much easier it had been to default to ‘nice’.

Was he a bad man? No. Did he cross professional boundaries and infringe on my sense of personal space? Yes. And he seemed ignorant of that transgression; he probably thought he was being flattering.

While I usually sweep such experiences under the rug and move on, I had trouble letting this particular incident go.

This, perhaps, is why I admire the work of Malaysian filmmaker Amanda Nell Eu and Singaporean writer-artist Tania De Rozario, both of whom will be spotlighted at Singapore International Film Festival’s June New Waves event. Eu and De Rozario present us with female characters who are blatantly, strangely monstrous. These girls aren’t ‘nice’—they’re female social resentment and justice in the flesh. As much as I fear them, I find a sense of kinship with them, in our shared indignation at society’s unchecked male entitlement.

Eu’s short films, Spit (2010) and It’s Easier to Raise Cattle (2017), will screen at the event. Both films revolve around female protagonists who don’t quite fit into the ideal feminine types: none of them are good daughters, wives, and mothers defined by their relation to, and accommodation of, male characters.

On one level, It’s Easier to Raise Cattle is about an unlikely friendship between two girls in a remote Malaysian village. On another (spoiler warning), it’s about a Pontianak—the female ghost from Malay folklore who, after losing her own life and that of her unborn child, seeks revenge by terrorising and eating men.

Why is she significant? This hantu is a perfect example of—to break into academic language for a second—the ‘monstrous feminine.’ That is, a type of monster, recurrent in popular horror, whose frightfulness is linked to female traits—namely, her sexuality and reproductive capability. The Pontianak’s status as a particularly Southeast Asian monster, drifting from our stories to our films and our nightmares, gives her a hold over our shared imagination. She’s a perfect antidote to monstrous males of the likes of disgraced film producer Harvey Weinstein, currently awaiting trial for rape charges, and the many others who disregard consent and disempower others. Eu’s film is informed by the normalised violence that women and girls face at the hands of men who, in this story, are silenced and relegated to the backgrounds of scenes. In the shot above, the wild-haired protagonist (and young Pontianak) in It’s Easier to Raise Cattle leaves the village on the back of a motorbike late at night, as a father figure looks on from his porch. The motorbike driver lingers on the dark edge of the frame, his face unseen.

The next day, Rahmah, our other young female protagonist, finds her friend lying exposed and vulnerable in the forest. The situation is beyond Rahmah’s comprehension, but we know enough to connect the dots. The monster we don’t see in the flesh—namely, misogyny—is clear as day in the older girl’s bruises, her night-time rides, and the strained interactions with the man on her porch.

The girl whispers, “Don’t tell anyone.”

In this world, as in our own, there are multiple reasons as to why victims of sexual assault remain silent. Is it because no one will listen? Is it because she feels unsafe in her community? Has our protagonist survived multiple instances of assault and learned to deal with trauma through silence? Eu doesn’t give us answers, and the questions only continue.

The next scene is set in the dark forest. In lore, this is the Pontianak’s home. We hear footsteps scurrying over dry leaves, and shrieks of delight. Eventually, Rahmah comes upon her friend who is bent over, fingernails long and gnarly, eating out of a man’s ruptured belly. 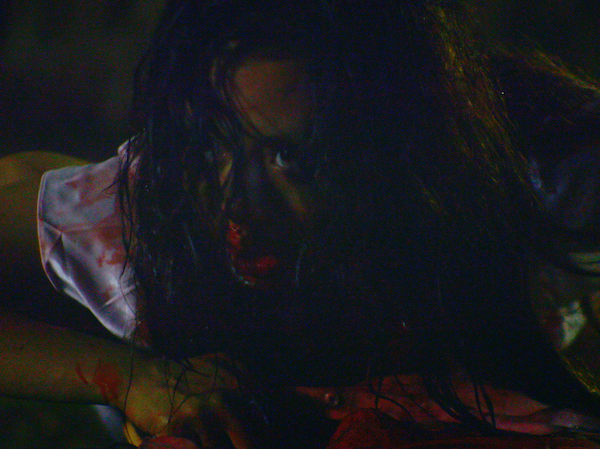 Again, silence. Rahmah doesn’t say anything. She reaches over and strokes her friend’s wild hair as the Pontianak continues to feed. She fears the other girl’s outward monstrosity, but ultimately responds with acceptance.

In this moment, the female hantu is transformed. She is no longer a monster beyond our understanding, but someone worth standing with for the suffering and the power she carries with her. The jungle where the Pontianak dwells is a place of monsters and death, yes, but for our protagonists it becomes a space of intimacy and freedom—to be the entirety of who they are (or have become). And so, we return to the first theme of the short film: friendship between two young women.

In this session of the New Waves series, Eu will be in conversation with De Rozario, who is currently working on a new book of poetry dedicated to female monsters conceived in Asia. Of the many things De Rozario writes about, her blog Not Your Final Girl is inhabited by poems from the perspectives of monstrous feminine protagonists, such as Sundel Bolong, a Pontianak from the 1981 eponymous film (in the poem Appetite).

Following a local rape case earlier this year, during which the defendant’s senior counsel Harry Elias argued that the woman could have ‘shut the gates’ (i.e. crossed her legs) to prevent the assault, De Rozario wrote the poem entitled Blame – Pontianak Meets Taxi Driver. In De Rozario’s poem, the Pontianak is the voice that narrates the story: a classic-horror taxi-uncle-meets-Pontianak tale we usually only hear from the male human perspective.

In a direct response to Elias’s victim-blaming, De Rozario writes:

So sorry for not stopping
your wanting while I still could, for not pushing
your hand from my knee, not resisting, not
insisting you stop the car.

Her Pontianak embraces her own sensuality and deadliness, for which she is completely and awesomely unapologetic:

So sorry for the lipstick
on your collar and blood on your seat.
For my beauty and your morals, both skin deep.
For the length of my teeth and the depth of your fear.

“She is assertive, uncompromising, unrelenting, solitary, neither a caregiver nor dependant. She roams the streets alone, at night, without an escort, and does not give a shit.”

Assertive, uncompromising, not giving shits—these are qualities I am trying to embody myself. Immediately, this takes me back to that discomforting taxi ride, where my resentment had grown into a larger, more abstracted rage against the threat of male violence that underpins too many everyday interactions.

I couldn’t help thinking, then: Why was this driver so unashamed to stare, to tell me what he thought of my face and body? Do men fear sexual harassment when they take cabs at night? Am I too ‘sensitive’? Or do I have the right to feel safe and reassured when I travel alone?

At the same time, in the aftermath of this incident, the women with whom I live, study, and work were there for me.

They validated the way I’d felt, and came up with ideas about responding to harassment in the future. They worked with me to draft a formal letter of complaint to the cab company. Gently and lovingly, they reminded me that I had every right to claim my sense of safety and dignity.

Eu and De Rozario’s female characters possess a monstrosity that invites us in rather than shuts us out. Likewise, I am grateful for the many friend-sister-mother-Pontianaks in my life.

If you’d like to hear more of their particular brand of ghost stories, attend SGIFF’s New Waves event “The Pontianak Resides Within” on the evening of June 27.

Annette Wu learned to bring her studies in anthropology into her exposure to film at Singapore International Film Festival’s Youth Jury and Critics’ Programme in 2017. She has always been a fan of the Pontianak.

This article is republished in partnership with the Singapore International Film Festival.