We asked 11 writers and translators of poetry, fiction and non-fiction to participate in an exquisite corpse-like Q&A session, with each person answering a question and then asking one. These writers, who hail from countries in the Asia Pacific such as Sri Lanka, Myanmar, Vietnam, Hong Kong, and Japan, are part of the 2021 cohort of WrICE (Writers Immersion and Cultural Exchange), an international digital collaborative residency program co-presented by RMIT University’s non/fictionLab (Australia) and literary non-profit Sing Lit Station (Singapore). Alvin Pang and Francesca Rendle-Short are this year’s residency facilitators.

Alvin Pang (Singapore): Quyen, what fears most flavour your writing?

Quyên Nguyễn-Hoàng (Vietnam): I wrote a poem a while ago about fears, some of which include “fear of wrong addresses”, “fear of toxic ambition”, “fear of commoditised Buddhism”, “fear of yet another convulsive coup”, “fear of forgetting to look at the sky” 🙂

Quyên: John, can you tell us one or two of your most hidden desires as a writer?

John Bengan (Philippines): Revealing one “hidden desire” already makes me nervous, let alone two—and I wonder whether I do have a desire that involves my writing hidden somewhere, or perhaps I’ve hidden it from myself.  Let me try to unhide one: I have this desire that what I write will be of use out there to someone.

John: Audrey, what is the first poem by another writer that made you want so badly to write your own?

Audrey Chin (Singapore/SEA): I’ve meditated for almost as long as I’ve written. For many years though, I simply could not put words to the communion and transcendence I experienced in the silence between my in- and out-breaths. Then I met Coleman Bark’s Rumi!

There’s a great deal of controversy about Bark’s secularised ‘interpretations’ of the great Sufi mystic. For me, his versions opened the possibility of putting words to my meditative experiences.

As the Bark’s version of ‘This We Have Now,’ says: 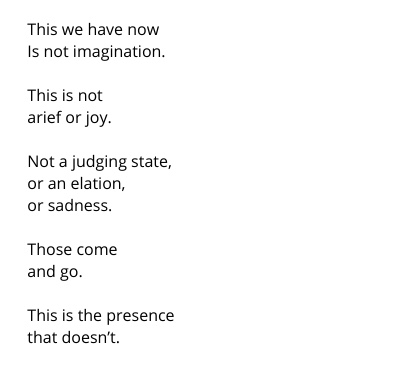 As for the poem that really pushed me to try writing contemplative verse, it’s the oft quoted A Great Wagon. Here’s the middle section:

And yet, there was Rumi trying to put it in words, and there Coleman Barks ‘interpreting’, here I am . . . We wordsmiths are such suckers for punishment!

Audrey: Tim Tim, how does your IG tag @mymothercalls relate to your writing?

Cheng Tim Tim (Hong Kong): I took the tag from The Horror’s cover of the song “Jack the Ripper” by Screaming Lord Sutch. When I was a teenager, I was obsessed with music from Southend-on-Sea despite not knowing its exact location. I thought it was funny for the singer to mention the mother in a song about midnight murders. It took me a while to realise that my own mother always calls me when I stay out late too. The sense of danger, inheritance and serendipitous connection are my favourite writing topics. (I often think that I become a poet to compensate for the fact that I am not a skilled musician.)

Tim Tim: Ramya, what’s your favourite plant? Or is there a plant you dislike with a passion?

Ramya Jirasinghe (Sri Lanka): There is a tree called the “pink trumpet tree” that has been planted along the roads of Colombo (tabebuia rosa); it blooms in absolute abandon and then layers the roads with a carpet of delicate pink flowers as they fall off the branches and float ephemerally down — whenever those trees are in bloom I feel that all’s right in the world. The fruit of the “Jam Fruit” tree (Muntingia calabura) brings back memories of eating its small red fruit that is filled with sand-like grains of musy seeds that go “chiri chiri” in as you chew — the thought of it still makes my stomach curdle.

Ramya: Francesca, can you please name the top five books that have influenced you the most?

Francesca Rendle-Short (Australia): Books and reading changed my life. Coming from a family where books were thought to be dangerous and better off being burnt (the subject of my memoir-cum-novel Bite Your Tongue), I’ve discovered quite the opposite, that they squeeze light into hearts, they disrupt, shift the axis of our universe. ‘To read a really, really good book for the very first time – especially those books that were once strictly forbidden – it’s sweeter than you could ever imagine. Reading can tickle and turn you upside down. Make your tongue hang loose. Books show us how to love, really love body to body between the pages. Love perhaps where we’ve never loved before.’  I could list the more than 100 books my mother wanted to burn, but here are my picks. Virginia Woolf’s Mrs Dalloway for its modernist cartography of a woman born through language. Richard Wright’s Native Son followed by James Baldwin’s critical Notes of a Native Son, on protest, social action and being black. Valentine Ackland’s For Sylvia (written in 1949 but not published until 1985): queer love on the page and the question of shame, a direct but contradictory account of coming out, but also a portrait of a creative partnership. And the groundbreaking exhibition of The Wagilag Sisters Story (National Gallery of Australia, 1997) that introduced me to bark paintings, ceremonial cycles and the creative forces of language, skin, blood: another form of reading story.

Francesca: Pandora, can you tell us what is it that you long for as a writer?

I long for freedom so that I will be able to write and I can happily call myself a writer.

Pandora: Clara, what made you decide to become a writer?

Clara Chow (Singapore): I like to half-joke that I became a writer because I wasn’t very much good at anything else. But the honest answer is that sometimes, these things creep up on you; it chooses you. I remember writing down in those “My Ambition” compositions in primary school that I wanted to be a writer. I suspect writing gave me a sense of control that I badly needed as a wayward child being constantly told by adults what to do. Your imagination could remake the entire world. I just wanted to make things up. To have secret things on the page. To not have anyone argue or interrupt or scold as you process your thoughts on paper. To have those secret, made-up things erupt into another person’s reality when they read your words.

Clara: Eugen, what is your writing space and routine like?

Eugen M. Bacon (Australian): I think it’s mostly in my head, where I construct fragments and skeletons of a new idea, then sketch them on scraps of paper, scatters of text on my mobile, notes to self anytime, anywhere. Being so productive and juggling projects, I’ve taught myself to write on the fly.

I do have a laptop and a working desk, but don’t have the luxury of using them all the time. And I can’t afford a routine! A small ritual may include writing to background—music, the news… Yet sometimes I need silence. I write on a trigger: a word, an idea.

I often start with a skeleton, a general idea, and the writing shapes itself. Characters tell their story and the story’s ending astonishes me.

Eugen: Rina, in the delicacy and sensitivity of your translations on themes of war and violence, how do you handle rhyme and rhythm? In word choice during translation, do you look for the closest fit (direct textual translation), closest feel (the word’s emotion) or closest rhythm (sound and flow)?

Rina: Alvin, what do you think is important and/or necessary to become a writer?

Alvin: Language is used everywhere, every day, for all kinds of ordinary and remarkable things: to buy fish, scold children, start wars, seek help. A writer is someone who remains curious about, and drawn to, what else language can do. Finding or falling into a quiet, a writer listens out for and explores these curiosities in a wide variety of ways. This can take time. A writer needs to have courage: to trust that this uncertain process will eventually yield insight, and then to articulate what has been found or felt as effectively and affectively as possible—even if it is unpleasant or inconvenient to do so. What we call writer’s block is most often a matter of lacking curiosity, patience or courage. Or care. A writer does need to care about the world—about how people and things and ideas are related or connected. A writer cares (relates) in and through language.

Sing Lit Station is raising funds to do more community outreach, and writer and youth development programmes. Check it out here.

Read more about these writers and WrICE here.