It started out as a “small project” amongst friends. Peter Ong, a musical theatre performer based in Malaysia, wanted to do a recording of the song Seasons of Love, from the musical Rent by Jonathan Larson, to create a message of positivity and solidarity with the region and the larger global community. The initial texts he sent, to performers Seong Hui Xuan and Mina Kaye and music directors Joanne Ho and Bang Wenfu – the five first met when they were part of Dream Academy’s Company in 2012, directed by Hossan Leong – grew into a larger regional effort with 76 singers and musicians from Singapore, Malaysia, Indonesia, Philippines, Thailand and Vietnam such as Sheila Francisco, Gianti “Gigi” Giadi, Adrian Pang, Pathavee Thepkraiwan (amadiva) and Tiara Jacquelina.

This interview has been edited for clarity and condensed.

ArtsEquator: What was the starting point for this video?

Peter: We were all in one form of lockdown around Southeast Asia. Everyone was feeling a bit down and obviously everyone missed each other because we haven’t seen each other. In this line of work, there’s so much human interaction, and suddenly you’re just alone in your little universe. So I thought okay, we can’t see each other but we can still sing together. How hard can it be?

ArtsEquator: Why did you choose Seasons of Love?

Mina: Seasons of Love is one of those numbers everyone knows, especially if you’ve done musical theatre. It’s a very iconic number.

Joanne: The song had to be known already so that we wouldn’t have to spend time in rehearsals. It’s really hard to learn things over Zoom, is what I’ve realised.

ArtsEquator: How did you all designate parts?

Joanne: We basically asked them what parts they normally sing. We then tried to spread it out so that every country was balanced within itself. Because we weren’t sure initially how the video would work out, if we were going to do it by country.

Wenfu: I gave a piano track with a click, and then the musicians started to record the drums, the bass, and all and then the singers all recorded based on that.

Joanne: And I did guide tracks that we also sent out (to the singers).

Hui Xuan: I think someone wrote an article calling the video a Zoom rendition of the song and Joanne was like “if only it was that easy”, then Wenfu wouldn’t have to spend sleepless nights trying to piece it all together. 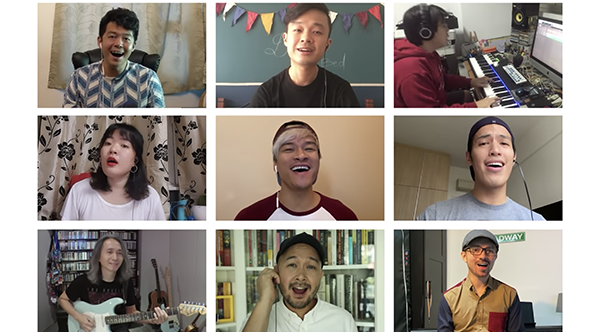 ArtsEquator: How long did you take to do your magic, Wenfu?

Wenfu: About a week? On average about seven hours a day. A couple of days I went way beyond 12 hours. It was quite intense.

Hui Xuan: Something that people might underestimate is just the fact that we’re all at home. Some people live with large families, or they don’t have the technical equipment to make a good recording of themselves. Even the video editors and Wenfu, they’re all working with home equipment.

Wenfu: Balancing the voices, all these different qualities and noise, that itself is tough because some are recorded through phones and some have more professional set-ups. Some post-produced the vocals. In an ideal world, you’d give me a clean track.

But the toughest part was that they were all misaligned. They’re all synchronised to the beat, yes, but their starting points are all different. All of us when we sing, we’re not exactly on the beat. That’s the funny thing, I realised that I spent up half the amount of time just trying to match the starting points. So I had to do quite a lot of cut and paste.

Joanne: The amount of work that goes into it doesn’t always reflect, when (someone is) watching the video. I don’t think any of us expected it to be as much work as it was.

ArtsEquator: How did you do the coordination of getting the performers involved?

Some people were like, “How hard can it be? They sing one song in English.” but it was actually very challenging because a lot of them perform musicals in their own language, in Thai, Bahasa Indonesia, in Vietnamese. To think that we all can unite around one song in one language, that’s really incredible. 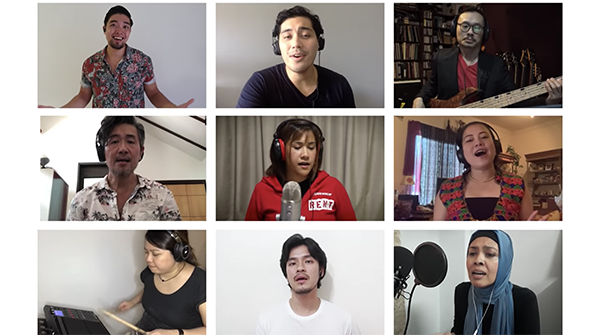 ArtsEquator: With musical theatre, you tend to be trained in the Western musical tradition, and that sometimes can be a criticism, but with this, it’s interesting that English as a language became something that you could galvanise around.

Peter: Hopefully in time to come up, we would be more aware of each other’s languages and cultures. I think that’d be great.

ArtsEquator: For Mina, Huixuan and Peter, how did you feel about singing this particular song?

Mina: Both Huish and I were in Rent, the production (by Pangdemonium), back in 2016. It was like muscle memory for me more than anything.

Hui Xuan: I’m a massive Renthead. I did my thesis on it.

Hui Xuan: This song in particular has a lot of things that a lot of people can, whether or not you’re a performer, or you enjoy musicals… I mean, just look at the lyrics. 525,600 minutes. How do you measure a year? In daylights, in sunsets, in midnights, in cups of coffee? It starts off as personal day-to-day things and then it becomes bigger things that speak to our time right now. “In bridges he burned, or the way that she died”. If you’ve seen the show, every time this song is sung, it’s people in a line singing it together, right? Singing it on your own has a very different feeling.

Mina: It’s very isolating as well. It was almost like, “what good is this?”. You know, (singsong voice) “singing alone in your room”. But then when Wenfu did his magic and put everyone together, it’s like, oh my gosh, you actually are part of something bigger. (It’s so) different singing by yourself with nothing – there’s no feedback, you can’t sing off of each other. So for me it was very… mechanical? Maybe because I was alone, because I wasn’t there to experience this with other singers with me.

Joanne: I think, of all art forms, being able to do theatre together is such a thing.

Mina: You do it in a room full of people, you do it with a bunch of people. You don’t do it by yourself. It makes no sense. 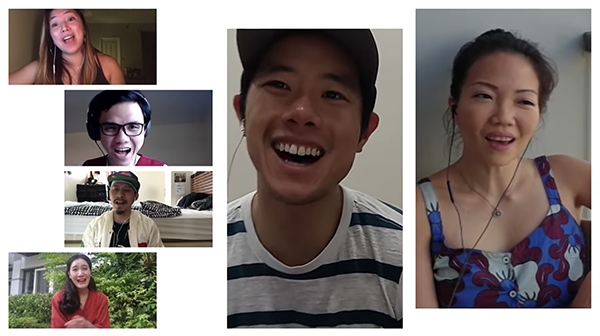 ArtsEquator: When it comes to conversations around theatre or around the arts, it’s been a little bit of doom and gloom and rightly so, but I felt like watching the video made me feel a little hopeful.

Hui Xuan: It’s the Peter Ong magic. He makes people feel like things are possible. I think there will always be bad times in whatever situation, obviously now more than ever. But I think we have to have hope, right?

Joanne: Without Peter Ong, this project would not exist.

Mina: These guys put in so much work too – I think I did the least out of the team – but these guys… I read the messages that they sent to each other. They were so considerate of the feelings of different people.

Hui Xuan: Peter played a huge part in helping the video editors sort through the footage. Importing the videos into a different format and then exporting them. The computers were crashing. And then through all of that, he still had to make sure everyone gets equal screen time.

Mina: He timed everyone.

Peter: I had amazing people to work with! We had people like Sheila (Francisco) from the Philippines, who was such a gem. She was like “whatever you need, I’ll chase them”. We had Sean Ghazi in Malaysia who was our third eye. He was like “this video is too dark, can you make it brighter?” We had a lot of help. I mean, in every country, there wasn’t a single hesitation. It was an amazing process.

Joanne: It taught me a lot about trusting. In our line of work, that is not the easiest thing to do in real life. We try to control a lot. But in this situation we can’t do that. I can give you broad guidelines, like “the song needs to build”, “this is a quiet section, this is a loud section”, but apart from that, you need to completely trust your own musicians’ musicality in this situation.

The band (Joel Nah, Daniel Chai, Brandon Wong, Rizal Sanip and Jennifer Ng) surprised me a lot. We told them “this is a rough idea of what we want the song to be like, but we want to create a version that’s our own”. And we gave them liberty to play. The fact that they managed to come up with an arrangement that went together, that suited the purpose of the song, and that fit with everybody else without ever having heard anybody else, nor rehearsing it, was amazing. These musicians were really amazing. They are the best of the best.

Wenfu: I learned to trust the process. I didn’t quite believe that this would be possible – to achieve this kind of ensemble sound, with individual mics from 70 different sources. I would never have tried it otherwise.

Joanne: Getting theatre artists from across Southeast Asia to do a project together… it doesn’t always happen, you know? To get that many together on the same project – if not for these times we are in, it wouldn’t have happened.

You can watch the video, Seasons of Love, by The ASEAN Musical Theatre Project here.