The recent US election has Bilqis Hijjas reflecting on the politics of minority safe spaces and her Southeast Asian identity.

In the weeks since the US election, I have had ample opportunity to ponder the nature of social unity and division. Within the broadly Democratic enclave of New York University, where I am pursuing a Masters in Arts Politics, the announcement of a President Trump unleashed a storm of hand-wringing and finger-pointing. In class,

students slumped glumly in their seats, passing around box of tissues as they talked about their shock and horror. Despite the cold wet nights, many of the students – who might never have known any administration during their adult years except the relatively benign reign of Obama – took to the streets in protest.

The election, and the long campaign season that led to it, has exposed the deepening divisions in a society scarred by battles over class, race, gender and sexuality. In my postgraduate course, my cohort – more than half of whom are international students – has been exploring the shifting grounds of US identity politics and social justice.

There is new terminology here, compared to when I in the States attending college fifteen years ago. Then, the term People of Color (POC) was not much used. Now it is a fixture of young, liberal American life: a catch-all term for anyone who does not identify as ‘white’. Native Americans, African Americans, Latinos, Middle Easterns, Asians and Pacific Islanders – all are welcome.

But some of the Asian international students in my class have balked at this categorization. “Isn’t it racist?” they ask. “Isn’t it, too, divisive?” But the American students who identify as POC see it as a way to acknowledge the systematic oppression of non-white people while moving beyond the black-white binary. They find it empowering because it is being used by people voluntarily.

Even though ulitmately, the aim is a world ‘beyond color’, right now the term POC is a powerful symbol for claiming space. POC-only spaces, which are multiplying on liberal college campuses, are expected to be safe spaces where you can heal and build solidarity. (Which explains why, the day after Donald Trump was elected, the NYU center for multicultural education was declared firmly POC-only.)

In the US, POC is an umbrella under which minority communities band together for political visibility, against the ‘majority’ white culture.[1] Of course in Asia, where the majority are POCs, the distinction becomes meaningless. The use of this term in Asia might also disguise issues of privilege and oppression within and across communities of color. Why worry about white dominance of global capitalism, for instance, when there are the more immediate issues of China’s expansionist plans in Southeast Asia, or, to take a single country’s example, Malay supremacy in Malaysia? The term POC in Asia, then, becomes not so much inaccurate, as politically inconsequential.

Identity markers are slippery and difficult anyway – and yet we all subscribe to at least some of them. The term Southeast Asian is one that I personally use and accept. Here in the States, few people know what Southeast Asia means. Americans expect it to include Taiwan and Hong Kong, perhaps Papua New Guinea. And why shouldn’t it? Like many of our modern phrases, as well as the now unused East Indies, Indochina and Malay Archipelago, the term Southeast Asia is an arbitrarily-defined artifact of colonialism. In fact, it was first used by European geographers and anthropologists in the 1920s and 30s.[2] It gained legitimacy with the formation of the Association of Southeast Asian Nations (ASEAN) in 1967. But then there were only five countries included, and now there are ten, with two observer nations, which just goes to show how flexible a term it is.[3]

Originally ASEAN was formed as a bulwark against Communism, and in that sense was more a creature of Cold War postcolonial geopolitics than we usually realise. Later ASEAN was reconceived as a model for increasing economic growth as well as for maintaining political stability. As one friend who works in international security puts it, ask not what ASEAN has done for you, notice instead that no major wars have erupted between its sovereign nations since it was formed.

I use Southeast Asia more readily than ASEAN. But even Southeast Asia I consider as an expression of a sense of lack, of vulnerability. Just as the term POC unites multiple minorities under a single banner, so all our countries huddle together for mutual protection as an entity with a single name. We are a cluster of Little Traditions squeezed between the Great Traditions of China to the northeast and India to the west, and other powers even further away. They have their epics and classics, their religions and languages. We are their trade routes, their colonies, their source of labour, their markets, or their sink for overflows in population. We are their converts. We are positioned at their juncture, their complicated buffer zone. We are the place of flow, synthesis, hybridity. We are flexible. We adapt. We compromise.

Given how vague and novel this term Southeast Asia is, it is amazing that anyone can self-identify with it. But perhaps within our various nations in Southeast Asia, we are used to having multiple, overlapping and sometimes conflicting senses of identity (thanks again, in large part, to colonialism). Our countries in their present state are also very young, and yet how staunch are our patriotic spirits! After all, it was in our midst that social theorist Benedict Anderson coined the term “imagined communities,” to describe the rise in postwar and postcolonial nationalism. Perhaps, in addition to the attributes suggested above, we are also very good at imagining things. 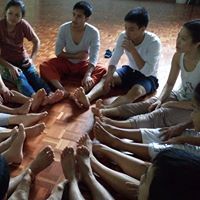 Choreolab at my family’s arts centre Rimbun Dahan, outside Kuala Lumpur. It is a nine-day retreat for selected emerging contemporary dance choreographers from the region. I envision it not only as a place where young artists may learn more of their craft, but also where they can share their perspectives, perhaps find some common ground, and, more importantly, develop a network of their peers within the region. I believe, somehow, that our works must mean more to the people within our region than without. And given the usual flows of international social and cultural capital, we have few opportunities to get to know each other elsewhere.

In the same way that I feel the historical existence of Southeast Asia is determined by lack, I believe any solidarity in our regional arts community is also marked by scarcity. With the notable exception of Singapore, all of our countries offer little government support for contemporary art. We create in a vacuum, from very few means – and yet create we do. And we are squeezed between the relatively affluent public funding models of Australia, Japan, Korea, Taiwan and Hong Kong. So when young choreographers from Australia or China beg to be included in the Choreolab, I have no problem telling them no. We may not have much else, but this is ours: our SEA-only safe space where we build solidarity. If you want one, go make your own. 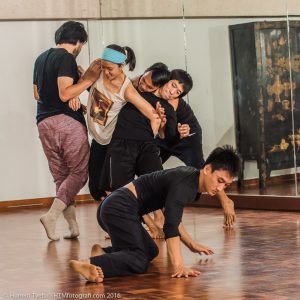 But an event for Southeast Asians only – just like those POC-only events – can be tricky. Even discounting Singapore, there are vast differences and inequalities across our region. These become obvious during the Choreolab. Our language for working together in the studio is English. The Malaysians might translate for the Indonesians, but who will translate for the Vietnamese and Cambodians?

Everyone has to pay for their own airfare, but some people live further away. Getting to Kuala Lumpur from West Papua is particularly challenging. Some countries have fairly developed communities of contemporary dancers; others have almost nothing that goes by that name. Some countries also routinely send promising dancers overseas for training or work, whereas choreographers from other countries may have very little international exposure.

And this is not even to name the regional tensions about who is stealing culture from whom, who is exploiting whose migrant workers, who is invading whose islands, and who is refusing to accept whose refugees. 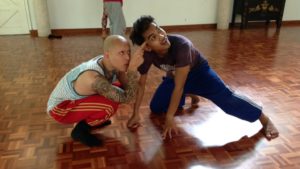 So using the identity Southeast Asian as a source of solidary and empowerment is hard. It does not always make us feel at home. It does not always feel like a safe space, where we can heal or recharge. And some day, perhaps, we will not need it. But like the social justice warriors who are championing POC here in the United States, we can harness our identity as Southeast Asians to achieve something together we might not be able to achieve alone. Some days it will be a struggle. But what a good thing we have a lot of imagination.

[1]   Whether or not whites are in the majority is debatable, depending on the definition of whiteness. In certain areas, such as the five boroughs of New York City, POCs outnumber whites. Due to national demographic changes, whites, even broadly defined, may not remain the national majority for long (see US Census data: http://www.census.gov/content/dam/Census/library/publications/2015/demo/p25-1143.pdf?). In some contexts in the US, the term ‘minority’ is now considered insulting.
[2] Fifield, Russell H. “Southeast Asian Studies: Origins, Development, Future.” Journal of Southeast Asian Studies, vol. 7, no. 2, 1976, pp. 151–161. www.jstor.org/stable/20070179.