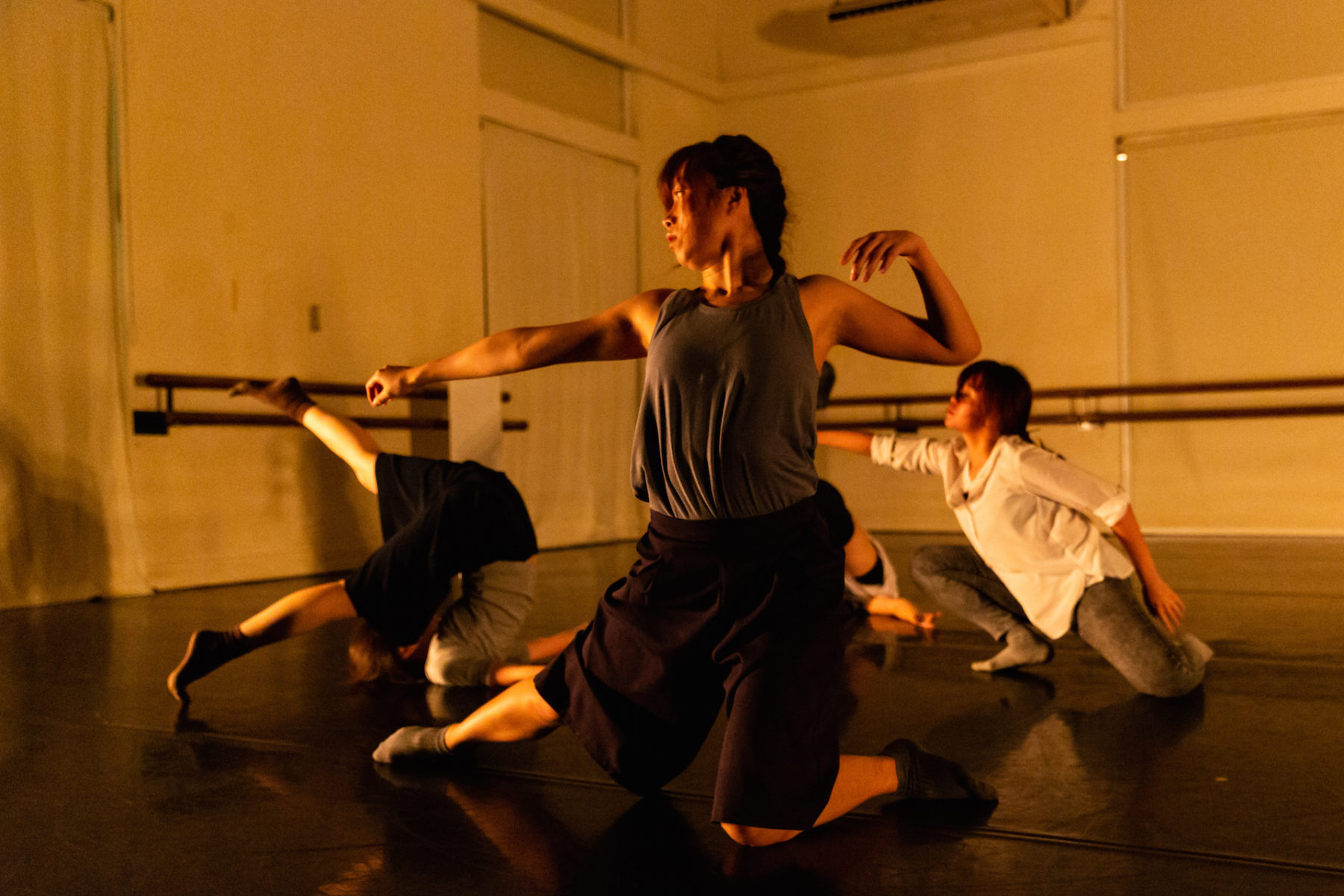 M1 Contact Contemporary Dance Festival has become a staple of the contemporary dance scene in Singapore. It has used its resources to bring forward voices, particularly from the region, in an act of affirmation. Balancing local and international artists, bringing in projects mostly of an indie nature, this artist-led festival plays the important role of celebrating thoughtful choreographic voices across a spectrum of experience.

Off Stage brings together a collection of works-in-progress, though the amount of progress each piece has made is patently uneven. This is to be expected since their starting points were quite unequal in the first place, with some long-term partnerships and some works already past their initial creation phases. Presenting artists have educational backgrounds spanning different parts of the world including Singapore – I mention this as learning institutes and their contextual references influence aesthetic choices and where special attention is drawn to, be it spatial design, a message, the music and so on. In a platform like this I find it difficult to decide what feels most impactful or groundbreaking: perhaps it is simply about potential.

Taken as a whole, this season’s Off Stage gives me the superficial impression that all contemporary dance leans towards musing, atmospheric music, fluid movement, and introspection. I know this to be untrue, and ponder if the in-progress nature of the platform attracts such works, or if making this impression was a curatorial decision. Whichever the case, the number of audience members who stayed back for an impressive hour-long dialogue is testimony that discourse is desired. That contemporary dance matters to a significant collection of people. That Off Stage, and platforms like it, carve a necessary space. 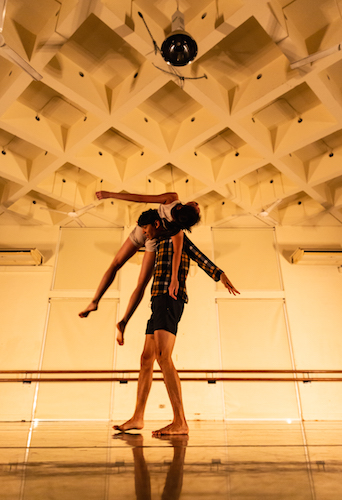 When it comes to this iteration of their works, it seems like my sweeping assessment of the collective does not hold water. Certainly, the works are mostly musing. But the luminous quality of Jun Boram with the quiet wildness of Thanh Chung Nguyen, are nothing like the intense, stylised primitivity of Amelia Chong. Two women (Neo Jialing and Aricia Ng) get psychological and confessional, while a man and woman (Hong Guofeng and Chua Chiok Woon) comedically perform their power differential. Also featuring a woman and a man, choreographer Shermaine Heng investigates spaces through the emotive and the intimate, to arrive at the lovely conclusion of dancer Chew Shaw En holding the spaces of our imaginations.

Of six works, four works were performed by their creators, while two works separated role of the creator from that of the performer. This had different effects: some works perhaps were more impressive for their performance quality than for their choreographic choices, others were deeply authentic but required greater definition. Some works seemed mostly complete, self-contained. Jun and Chung open the evening by wordlessly inviting audience members to place and arrange stones in a corner. Getting involved shifts us out of passivity immediately. The zen state suggested by their behaviour, the stones, and later on, the music, invites me to allow their dance to wash over me – one performance event settling into its place amongst others, like the stones. 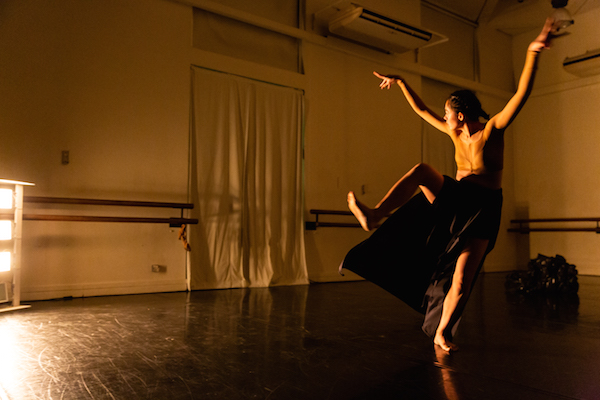 Chan Wei Chee sets up the fourth wall between audience and performer; the soundscape a mix of ambient sound and mumbled thoughts. A vague internal monologue inexplicably danced by four women: what is clear is that they are developing a movement motif of holding space between their forearms. A towering female soloist presents next: Chong is covered by a black plastic sheet making interesting shapes and sounds, a foreboding, low-budget, monster. When she emerges, claws out, her strong presence sprawls the space and shifts between human and creature, between deep squats and high reaches. Neo and Ng dive into the psychological labyrinth of two women not entirely, not exactly, themselves, exploding inwards and announcing text. They manage to circumvent trite symbolism even when using the tropes of removing clothing or crashing dangerously on tables, with a raw emotional intensity pushed along by the rhythm of their spoken words.

Hong and Chua take on humorous personas, matched by breezy Francophone music calling to mind a Parisian sidewalk cafe. A refreshing and lively duet playing with power dynamic through physical exploration, two distinctively lanky bodies striking an impression. The audience gasps audibly when Chua lifts Hong to her chest and walks around nonchalantly. To close the evening in perhaps the most finished piece, Shermaine Heng features her dancers exploring intimate corners, invites the audience to also inhabit our chosen spaces and observe their bodies moving in comfort. The piece invites calm connection, playing with the tension of two bodies being near and far, even squaring each other into boxes. It took a while to understand the precise intention of being allowed to roam as an audience – having the choice to move was liberating, as was the chance to create our own nooks and crannies. 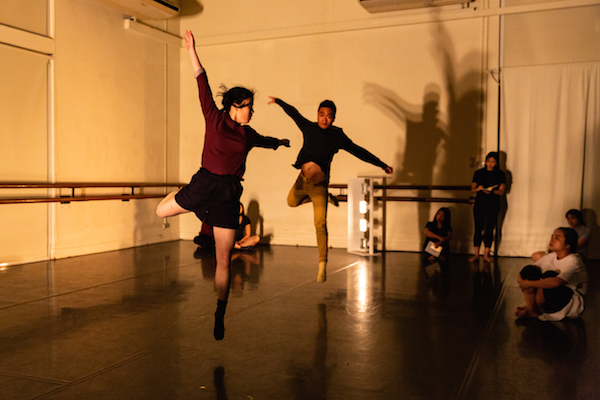 This is a collection of artists who seek to communicate beyond themselves, even as they dive deep within. It seems to be a thread for the festival, no matter which platform or framework. Perhaps “to communicate” seems like an obvious ingredient to focus on, yet the intricacies of how and why and when and where, are perhaps well revealed through the choreographic mindset of contemporary dance.

In its 9th edition, the festival format has shifted over the years in an attempt to take into account the needs and perspectives of local dance: sometimes involving Singapore’s dance companies and their repertoire, sometimes focusing on individual projects by artists, and sometimes matching artists in collaborations. It requires emphasis that the festival is organised by a major player in the scene, T.H.E. Dance Company; the festival’s aesthetics and direction are informed from that point of view. Being artist-led, the festival is sympathetic to the needs of artists; being company-led, it must also be concerned with artistic reputation. Within this delicate balancing act of playing artist, curator, presenter, and advocate, the “Off Stage” platform was created a year ago, as a space for artists to present works-in-progress, and for audiences to be part of the process of development. I am a writer also working as an artist in the scene myself, and recognise the invaluable impact of such platforms. The resources provided by the festival means that some aspects of creating and sharing a work are taken care of. For independent projects, some of the needs include rehearsal space, technical support, reaching an audience, financial backing, mentorship and time. This comes as an integral part of the creative process, and to have some of these provided for by the Off Stage platform, must be a relief for artists involved.

Guest contributor Bernice Lee is a dance artist whose love for language is in its kinetic, felt sense. She sees writing about performance as its own artistic medium, contributing her voice to building positions and perspectives over time. Visit her website here.