The Asia Europe Foundation’s Culture360 and ArtsEquator present a series of 5 co-commissioned articles that look at arts groups, artists and performances in Southeast Asia that are comprised of or address artists with disabilities. In this article, Stephanie Burridge talks with performance-maker Ramesh Meyyappan about inclusivity, the need for hearing and hearing-impaired artists to share the same mainstream platform, and his upcoming show Off Kilter, presented at 72-13, Singapore.

An off-day for some people is to be savoured, but the same might lead into a downward spiral for others. The reasons are complex and deeply personal; often unexpected and surprising. Scary, simply a little unsettling or profound, emotions can escalate into a mental health situation involving loss of identity and social stigma. Performance maker Ramesh Meyyappan returns to Singapore in a one-man show titled Off Kilter created and developed as a co-production with the Tron Theatre (Glasgow) and Theatreworks (Singapore). The Scottish-based Singaporean unpacks the issues surrounding mental health. In an email interview he says Off Kilter “will look at how one man deals with the descent into mental ill health, loss of identity and how we perceive him and ultimately how we might empathise with him…”

Although Off Kilter is a solo performance, the process involved brainstorming ideas and working with other artists like Kevin McMahon to script it and work on a series of illusions. Thematically rich layers of material evolved with other artists coming and going from the project to input ideas including Andy Arnold, Tron’s director, and choreographer Jessica Kennedy. Singaporeans Pearlyn Cai (producer), Andy Lim (lighting designer) and Joel Nah (composer) joined the process in the later stages.

Eventually however, Meyyappan took time for some immersive reflection, apart from his collaborators, to explore an inner world of loneliness and isolation. Off Kilter juxtaposes this duality of inner self and outward connection as the character grapples with both mundane and outside expectations. As a performance work, it engages the audience with lighter moments alternating with depths of darkness and introspection. As an exceptionally insightful artist Meyyappan draws on visual components to tell stories and probe meaning. The outer epidermis is scratched to reveal a layered, visceral exploration of people and place. The audience is integral to the equation as the artist’s intention is not only to evoke empathy but also provoke and probe a somatic sense of what it might be like to work through emotional issues that could be deemed ‘off’. “I think with Off Kilter I wanted to offer a sense of the real stories and not over dramatise these – I am hoping that the audiences might identify with some moment experienced by the character.”

Creating an interdisciplinary language through collaboration is a familiar process in all Meyyappan’s works from the “Life” award winning Snails and Ketchup and the other work slated to be performed in Singapore, D Monologues working with Singaporean and UK artists as part of Unlimited. Storytelling underpins this work that is performed by differently abled artists in both Singapore and Glasgow. The process evolves through relating stories, both personal and fictional, then developing characters from this material.

Deaf from birth, Ramesh incorporates a heightened awareness of visual material including circus skills, puppetry, choreography and illusion in his productions. His work enables this special talent: “Thinking visually is where I’ve had to be innovative – exploring ways to tell a story in a purely visual form has proved to be both challenging and rewarding.” He has steered away from using signing in his productions as it may alienate non-signing audience members and detract from the main event particularly in visually-based theatre. A more integrated approach, rather than a signer at the side of the stage, would work better for him and he has seen variations of this in European productions. As a teacher to hearing impaired students in an undergraduate performance programme in Glasgow, he is often frustrated by their separation from the hearing students, regretting the few chances for them to work together. Although the access to training and opportunity for these students is welcome, it reinforces the far too common separation of artists with different abilities into specific platforms rather than sharing the mainstream. Ramesh thinks this “reflects generally what is happening in the arts – there is improved access but it is not entirely inclusive – inclusion is not just about providing access!”

Sharing the stage with artists in an inclusive platform is something he enjoys and thinks important for audiences to experience. Ramesh Meyyappan looks forward to more collaboration and opportunities for hearing and hearing-impaired artists to perform on the same stage. Working visually, imaginatively and taking risks with new ways of working makes him a unique artist on the world stage.

Off Kilter by Ramesh Meyyappan premiered at Tron Theatre, Glasgow from 10 – 13 May as part of Mayfesto 2017. It will be performed in Singapore from 11 – 14 October at 72-13, presented by Theatreworks. 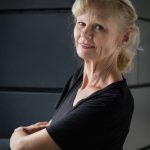 Stephanie Burridge (PhD) lectures at LASALLE College of the Arts and Singapore Management University and is a choreographer, performers and dance writer. She is Series Editor for Routledge anthologies Celebrating Dance in Asia and the Pacific and Perspectives on Dance, Young People and Change, co-editor Charlotte Svendler Nielsen, Series Foreword by Sir Ken Robinson and Embodied Performativity in Southeast Asia: Multidisciplinary Corporealities (2020). In 2021 she edited the Routledge Companion for Dance in Asia and the Pacific: Platforms for Change and co-authored Routledge Choreographic Basics with Jennifer Roche. Her current choreographic focus and research is collaborating with senior artists and is coediting a new Routledge anthology Dance On! Dancing Through Life to be released in 2023.