It was perhaps the melancholy of history that was the most palpable presence in the livestream action Fragments of History, which I organised as part of Mekong Cultural Hub’s Mini-Meeting Point held on 17 July 2021. Though it took place in under 30 minutes, the event brought me and the audience onsite and on Facebook Live from present to past and back again. The story was drawn from deeply autobiographical wells of Nguyen Van Loc, a 76-year-old Yellow music singer living in Hanoi. However, he is known by another name, Loc Vang, which can be translated as “the one who was imprisoned for singing Yellow music”. He is so named after Nhac Vang, or Yellow music, a genre of music from South Vietnam that was once banned for its lyrics and poetry. Loc Vang himself was arrested in 1968, during the Vietnam War, and spent 8 years in prison and 4 years in probation.

The action unfolded when I walked through the door of Loc Vang’s house. I came across an interesting character, Nguyen Dinh Toan, a childhood friend of Loc Vang who had coincidentally decided to come to his house that day. Gathering around the table, the two friends sipped a cup of tea, revisiting old stories of when Loc Vang was released in accordance with the Paris Peace Accords in 1976, two years shy of the original 10-year sentence. Ironically, as soon as he got out of prison, Yellow music became a trend, and could be heard in every cafe throughout the city.

Recalling a sudden surge of emotion, Loc Vang started singing a Yellow song, Nỗi lòng người đi (“Melancholy, the ones who walked away”), with its distinctive melody of regret and sadness, drawing a small crowd to his four-level house where his daily activities take place.

I was away from Hanoi when I was eighteen years old, I just knew what love is

How many beautiful dreams and loves melted into smoke, and disappeared with the clouds.

– Lyrics from Nỗi lòng người đi (“Melancholy, the ones who walked away”)

Such songs remain popular especially with the older generation in Vietnam. The loosening of state control over culture means that Yellow songs are no longer banned today, but the term “yellow music” is not officially used. Instead, it is known as country music, old music, or sometimes boléro, after the Cuban-originated genre, though most popular yellow songs are not strictly speaking boléro. It is also not clear why the music of South Vietnam came to be called “yellow music”, though the answer might lie in the translation of the word ‘Vang’ which means both yellow and gold in Vietnamese, and alludes to the flag of South Vietnam. The term, for the Vietnamese in diaspora, implies a sense of pride and celebration for the imagined heritage and cultural traditions of South Vietnam.

Through the little historical dialogue of two old friends, I discovered that Toan had contributed photos to Loc Vang’s memoir, published in 2018 with the title The Melody of Fate, and is also a well-known veteran photographer in Hanoi. Amused by my reactions, Toan offered to take some documentary photos for us throughout the action.

I accompanied Loc Vang on a walk along an alley leading to the main street. The alley is crammed with four-level houses with walls made of corrugated iron sheets. The area is located near the bank of the Red River, only 3km away from the centre of Hanoi, but the residents are mainly farmers and unregistered citizens, from the outskirts of the capital. Day by day, their life takes place on this land, which is highly sought after by construction companies, a site of an urban forest and a mega housing project.

But, as Loc Vang began to sing, the grey melancholy and uncertain fate of this area began to fade away, leaving just the crooner’s dreamy voice making its way down the alleys.

Neighbours and customers sitting at the roadside tea bar began to notice Loc Vang as he made his way down the street. Some stopped to listen to him sing, others pointed and whispered to each other. But that hardly affected him, he was in his own world, a world where he and the music merged into one.

“The yellow music is soaked into my blood, it has formed like a trail in my mind,” said Loc Vang. “When I am singing a song, the next song continues to appear.”

Fragments of History was organised by Duong Nguyen Thuy as part of a programme of mini-Meeting Point 2021 on 17 July 2021, presented by Mekong Cultural Hub (MCH). Duong is one of MCH’s Regional Representatives from Vietnam, who have been working with artist Tran Luong and assistant Le Thuan Uyen to devise creative actions in their local communities, with the aim of revealing local contexts.

This article is sponsored by Mekong Cultural Hub. 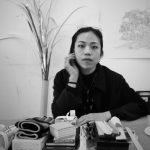 Duong Thuy Nguyen - born in Hanoi, Vietnam, currently archiving her master in Fine Art at Central Saint Martins, University of the Arts London, where she has been awarded the UAL International scholarship.

Duong multi-disciplinary as an artist, writer with byline in Art & Market, Ocula, Plural art and ArtsEquator. From 2014, Duong worked as a researcher and lecturer at University of Theatre and Performing Arts of Hanoi.

In 2021, she works at Mekong Cultural Hub as a Regional Representative. Exploring the intersections between contemporary art and social response, Duong works with practice-based research focusing on reflecting social cohesion, community identity, and the interaction between humans and nature. Growing up in a developing country, Duong comes face-to-face with problems like environmental destruction, gender and racial discrimination every day. Committed to advocating the strength of an artist as a site, Duong’s work is critical and brings a necessary message to various communities.