One of the highlights of da:ns festival this year is a double bill by Eisa Jocson, Macho Dancer and Corponomy. While Corponomy is a new commission by the Esplanade – Theatres on the Bay for da:ns festival 2017, Macho Dancer is a critically acclaimed piece that has travelled extensively to major international festivals. Philippines-based curator and writer, Eva McGovern-Basa, recently managed and edited an interview format book on 28 artists and their relationships to Metro Manila, No Chaos, No Party, which included Eisa Jocson, published in December 2016. She also caught Macho Dancer in 1335Mabini (a commercial art gallery in Metro Manila) in 2013, and shares her insights on the piece with ArtsEquator.

Internationally acclaimed Filipina dancer and choreographer Eisa Jocson will perform one of her most iconic works to date, Macho Dancer at the Esplanade Theatre Studio as part of da:ns festival 2017. As a woman taking on the role of male dancers who perform stylised and seductive dance routines in nightclubs across Metro Manila’s red light districts, she presents a powerful and hypnotic performance that transports both audience and performer into a complicated ‘gender loop’ that considers ideas around the Filipino body in restrictive labour systems.

Jocson has always been interested in ideas of gender, class and power, through her street interventions, theatre, dance and performance art projects. Following on from her work Death of a Pole Dancer in 2012 – which looked at female gender politics – she shifted her focus to male macho dancing after discovering that this type of movement was unique to the Philippines. Interested in the socio-cultural and economic conditions surrounding this practice, she started her research by learning how to macho dance, inviting dancers to teach her their signature moves, which she then painstakingly documented for intensive study. However, she realised that in order to fully understand this movement practice she also had to reconfigure her body into the macho vocabulary, building new muscles and changing her posturing in order to be more physically grounded. By connecting to her muscularity, she was able to grasp the language of macho dancing that alternates between tenderness and tension in order to create a heightened sense of time and space through the body.

In Macho Dancer, the male protagonist is replaced with Jocson herself, who is alone in a black box environment. Wearing short military shorts, a black vest top and boots she slowly undulates through a series of poses that takes her from standing to floor based moves, embodying the strong male persona, as popular power ballads play in the background. She is in total control of her body, commanding all eyes to focus on her. This triggers a disorientating, threatening and perhaps liberating response in viewers governed by conservative social expectations about how women should claim and present their bodies in public. This ‘gender loop’ then opens up wider conversations about how bodies are consumed as capital in marginalising industries such as the sex trade.

However, despite presenting a strong idealised male persona, the macho dancer in the Philippines has a weak position in society because he is a red light entertainer. His strength is a performative illusion. So even though, as a woman, Jocson is adopting the role of a ‘powerful’ man, which in turn elevates her status, she is nevertheless still objectified because the macho dancing world is one of objectification. And in terms of labour and body capital, any economic mobility such a profession might offer is also usually temporary due to manipulative political machinations that keep the working class in their place. By highlighting the seduction politics of this industry she aims to expose the futility of a trapped Filipino body where power is an illusion only to be performed on a nightly basis and never achieved in real life. Real mobility is always out of reach.

Macho Dancer and Corponomy will be performed at the Esplanade Theatre Studio on 27 & 28 October 2017, 8 pm, for 2hr 15mins (including 30min intermission). Corponomy is a performance lecture that reflects on all Jocson’s works produced from 2009 to 2017, which are concerned with the representations of the dancing body and the production of fantasy in the service industry. Advisory 16: Recommended for age 16 years and above. Contains female upper body nudity and mature themes. 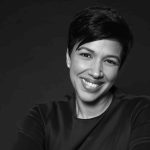 Eva McGovern-Basa is a British-Malaysian independent curator and writer based in Manila, Philippines. Since 2002 she has worked across various institutions including a curatorial fellowship at the Serpentine Gallery, London, and was Head of Regional Programmes for Valentine Willie Fine Art (KL, Singapore), she was also the Philippine Consultant for Christie’s auction house. She has written extensively on contemporary Southeast Asian art for magazines, websites and publications. In 2016, she recently edited and produced No Chaos No Party: 28 Artists in Metro Manila an interview based publication on artists and life in the city.