Skip to content
Jean Baptise Phou’s work My Mother’s Tongue began as a way for the artist to examine his relationship with his Teochew-speaking mother. Through collocations with other artists and audiences, the work has undergone different manifestations, but remains an “an exploration of the barriers to connection that transcend language” writes Deborah Augustine.

When you watch Jean Baptiste Phou’s My Mother’s Tongue, it’s hard to imagine that the film began as a solely audio experience. Originally, it was commissioned by the French Institute in Cambodia for an exhibition of Cambodian artists that would tour in France. The prompt was textiles, a material that Phou, who is a writer and multi-disciplinary artist, was unfamiliar with. But he started to think about threads.

Phou had long thought that language was a barrier of communication between him and his mother. As the child of Chinese Cambodian immigrants in France, he found himself only able to have simple conversation with his mother in Teochew, one of the many languages she spoke. It’s fitting then that a story about language began with audio. The story is most important for Phou, “…the main work was the sound, and I wanted people to listen.”

The visuals came later as he wanted to make the work accessible to people in Cambodia. Through a grant he was able to commission a translation into Khmer, but that posed a new problem: “…when I knew that we were going to have subtitles in an audio play…what do we show…on the screen? Only subtitles?” He went through a few options, including simply having a black screen with subtitles, abstract images or a slideshow of photographs. At the same time he didn’t want the visual choice to overwhelm the story.

In the end, he collaborated with Cambodian artist Sao Sreymao, who created digital illustrations to complement the photography used in the film. Rather than static images, the film is animated so that it’s as if the viewer is watching Sao draw each illustration live. The illustrations grow from an outline to a detailed picture as the narrative progresses. The effect is mesmerising and draws the eye to the screen so that you are transfixed by the story that unfolds. The visuals are not merely a backdrop to the story. They’re animation on the screen syncs to the rhythm of the story.

One particularly effective use of the visuals to illustrate the narrative is a vignette about Phou’s early attempts to learn Khmer in Cambodia. A figure that represents Phou with a squiggle of confusion emanating from its head appears over a black and white photograph of a classroom. His head and body slowly turn red as he learns about the complexity of the Cambodian alphabet, which includes 21 vowels. Throughout the scene, we hear Phou struggle to repeat the vowels. Each incorrect pronunciation is punctuated by a buzzer as the image vibrates, as if he is a game show contestant. All the while, details of the illustration continue to be filled in until finally Phou is able to repeat after his teacher and the illustration of him and his teacher is completed. 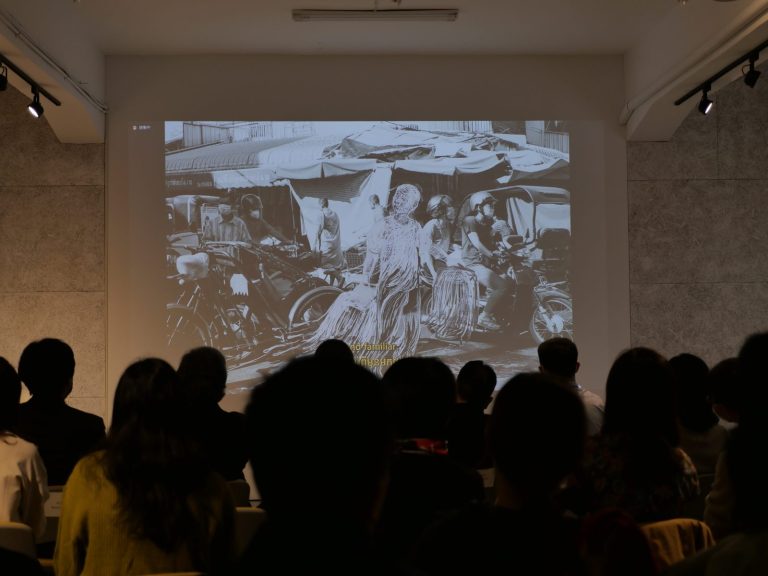 But the film is about more than mastering a language. Even Phou’s understanding of what it is to speak a language evolves throughout the film. At first he views learning a language as “simply repeating a memorised sequence of sounds in the right order”. Yet the first time he orders food in front of his mother in Khmer she tells him that that’s not how “we”say it. He soon revises his opinion, speaking the language is not merely about getting the order right, it’s about embracing his Cambodian identity and the challenges that come with that. As a whole the film is an exploration of the barriers to connection that transcend language.

So it makes sense that Phou’s film was chosen to kickstart this year’s Mekong Cultural Hub Meeting Point with added audio transcripts in Burmese, Lao, Mandarin, Thai and Vietnamese. Despite the personal and specific nature of the film, the barrier to understanding one another is a universal experience. Fittingly, the roundtable that followed the screening of My Mother’s Tongue was titled “Lost in Translation” that saw artists and researchers from very different practices and backgrounds share their experiences with collaboration across mediums, culture and language.

Phou’s inclusion in this year’s Meeting Point, which was themed from Connection to Collaboration, saw another layer added to his film through a collaboration with Thai media artist Theerawat Klangjareonchai, who goes by Meng. The film with its themes of missed connections and missing language became the starting point for the participatory digital installation Echoes from the Stars.

Phou was inspired by the strong emotional reactions people had to the film after its first screenings. With Meng, Phou created a platform where people could record messages to people they could not communicate with. The reasons could be that the person had passed on, or they were no longer in touch, or that the message was something that they could not bring themselves to say to the other. Throughout the Meeting Point people could record up to four one minute messages to upload to the Echoes from the Stars installation. Eventually these messages would become stars in a star map.

At an intimate sharing session during the Meeting Point, Phou and Meng spoke about the process of their collaboration and heard from participants. Initially, Phou had thought about mapping the stories onto existing stars and constellations. But through discussions with Meng, they decided to let an algorithm create constellations through the themes of the messages like regret, anger, love or apologies. For Meng, the messages reminded him of prayers that may or may not be answered, and for him the stars felt like people’s souls in the sky.

It was clear that for those who participated in the project there was something unexpectedly emotional and intimate about the experience. For one, the time limit forced people to be deliberate about the message they were recording. In fact, the time constraint was partly created to inspire thoughtfulness in the recorded messages. It was also a constraint meant to mimic the limitation of Facebook voice messages, which Phou’s mother used to send him messages with.

The final installation suffered a little from a lack of participation, which is always a risk in participatory artwork. The resulting star map was not as expansive as it might have been if more people had participated. However, the intimate nature of participation, even if the recorded messages were only identifiable by their location and the language they were recorded in, might have inhibited people. Some attendees at the sharing session, which was close to the cut off date for submission, said they were still considering what messages to upload. In an email after the Meeting Point, Phou added his thoughts on the lack of participation, “What the discussion with the audience during [the] MP helped me to realize is that people need to be ready to record their message. Other’s simply prefer not to. I can’t force people to interact with the work. I have created a space for people to express themselves, now, it’s up to them what they will do with it.”

My Mother’s Tongue has come a long way from when it began as a 15 minute audio piece. But could new iterations of the work be forthcoming? Phou said, “Before considering new iterations from the original work, the existing forms need to reach their full development and new audiences. In order to do so, maybe an idea would be to integrate My Mother’s Tongue and Echoes from the Stars into a physical installation, so that people would have a complete journey: viewing the film in a room, recording the voice message in a booth and viewing the star map in a dome…But that’s quite a lot of work and budget.” Whatever the film’s next evolution, it will be sure to be a beautiful and thought provoking translation of his original story.

Echoes from the Stars was produced with support from Mekong Cultural Hub, and first presented during the 2022 Meeting Point on Art & Social Action in Asia.  Meeting Point is a platform hosted by MCH, which brings together people interested in arts and society in Asia and offers a space to connect and to showcase related work happening in the region. The program is built up over 6-12 months, with practitioners producing sharing sessions, creating participatory art work and hosting local gatherings in their communities. The next Meeting Point is planned for March 2024.

This content is produced as part of a partnership arrangement between ArtsEquator and Mekong Cultural Hub. 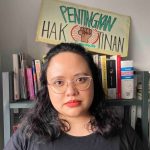